Managing one of the world’s longest rivers is a gargantuan task that involves a visionary approach and countless man hours from thousands of engineers. The Yellow River Conservancy Commission has overcome mammoth challenges to successfully manage the river’s flood and droughts but their work continues.

China’s winding Yellow River, spanning across nine provinces in the vast country’s Central Plain, has supported life since the earliest agricultural societies started dotting its banks more than 7,000 years ago.

Called the ‘cradle of Chinese civilisation’ – its basin is regarded as the birthplace of ancient China – the region surrounding the 5,465 kilometre river was among the most prosperous in the country’s history.

But the unpredictable nature of the Yellow River and frequent devastating floods has also earned the river names such as China’s Sorrow.

The Yellow River is the second-longest river in China and the sixth longest in the world. While its tributaries take up only two per cent of the country’s landmass, it currently supports 12 per cent of its population – about 110 million people – and 15 per cent of China’s total agricultural land.

Partly because of this, the river – also known as the “Mother River” to the Chinese - has suffered tremendous stress in recent decades; huge amounts of water have been was diverted to irrigate the surrounding agricultural land.

The stress was multiplied when China reopened the country to foreign investment from the late 1970s after decades of isolation and stagnation.

Cities and towns along the river – including Lanzhou, Yinchuan, Zhengzhou and Jinan – started drawing more water from the Yellow River basin to support the construction of factories, homes, and infrastructure.

This “dramatic” increase in the need for water for residential and industrial needs “led to overuse rather quickly and the water actually stopped flowing”, says a spokesman of Yellow River Conservancy Commission (YRCC), a government agency under the Ministry of Water Resources, which manages the river.

In fact, through the 1980s and 1990s, it was not uncommon for the lower reaches of the river to dry up, resulting in lost agricultural production and the suspension of some factories such as those manufacturing non-essential goods like clothing.

Things came to a head in 1997, when the Yellow River dried up for a record 226 days. The lower river was dry for 704 kilometres or 90 per cent of its length.

The disaster mobilised the central government, its agencies and civil society, and a committee was formed to study how the river – especially the lower river – should be managed to avoid catastrophic droughts and floods.

In 1999, the YRCC was tasked to manage the lower Yellow River and to mitigate the devastating effects of the destructive droughts and floods.

“It was a huge task,” says YRCC. “Our water management knowledge and expertise at the time was frankly very weak and backward.”

By the Commission’s estimates, it took more than 3,000 engineers just to regulate and manage the sediment of the river.

From the start, YRCC adopted a consultative approach on all aspects of the management process.

First, it had to secure the support of the provincial governments and the people to equitably assign water for domestic, industrial and agricultural uses.  This is to prevent abuse and over-exploitation of the river’s fragile water resources.

YRCC had a number of tasks; the first was to reduce the severity of floods and droughts, as well as the build-up of sediment in the river. This had to be done in a single integrated system.

The floods were devastating as the river is the most sediment-filled river in the world, due to the fine sands blown in from the deserts in the west of the country.

The sediment deposits on the riverbed and reduces the river’s capacity, increasing the risk of flooding. Sediment deposited in reservoirs built along the river also decreased the reservoirs’ effectiveness for flood control; they were not able to store the extra water.

To prevent this sediment build-up, YRCC has carried out more than 9 flushing operations – using water to remove sediment from the river bed – since 2002 to regulate the flow of water and sediments in the lower reaches of the Yellow River.

YRCC then implemented an integrated operation of all the reservoirs along 3,000 kilometres of the river to regulate river flow and boost storage capacity in case of future floods. It also built more reservoirs.

Sensors were deployed to collect real-time information such as water levels, flow, usage and quality of the water. The information is fed back to central headquarters Zhengzhou, Henan, where YRCC’s team monitors and controls the reservoirs and dams via a software system.

In consultation with the provinces, the YRCC also coordinated water allocation in the basin to prevent overuse and droughts. Based on the water available in the river, allocations to provinces were adjusted annually and monthly. Agricultural and industrial production could go on without disruption.

After a decade of plugging away at it, YRCC was able to significantly reduce the risk of devastating floods that the Yellow River was previously associated with – protecting the 90 million people living in the flood-prone areas downstream of the river from loss of lives and damage to livelihoods and property.

“Since 1999, the Yellow River has also been experiencing continuous flow. Gone are the days when the river dried up without any warning,” YRCC says.

YRCC’s efforts transformed the Yellow River and the lives of millions of people.

In 2010, the YRCC became the first organisation to be awarded the Lee Kuan Yew Water Prize for its work in overcoming natural and man-made challenges through its sustainable solutions. 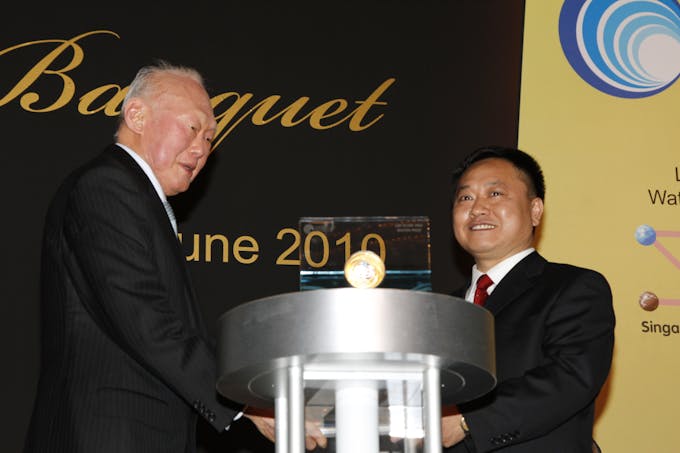 Established by Singapore as the ‘crown jewel’ of the Singapore International Water Week – a biennial event on the latest in global water innovations – the Prize is named after Singapore’s first Prime Minister whose contributions and vision helped put the country on the path of water sustainability.

In its citation, the Council behind the Prize said that YRCC’s integrated water allocation programme balances water availability with social, economic and ecological developments.

“The improved, reliable supply of water brought about by YRCC’s efforts have benefitted and enhanced the quality of life for over one hundred million people both in the basin and in regions served by the river.

“Large areas of wetlands and biodiversity in Yellow River Delta have also been restored over the years, returning life and vitality to the river,” said the council.

“The YRCC is deeply honoured to receive the Lee Kuan Yew Water Prize for our efforts in revitalising the Yellow River,” says the YRCC spokesman.

“We recognise that more can be done to enhance the ecosystem along a river that plays such a vital role in China’s economic development and holds an important position in the hearts of its people.

This endorsement reaffirms our long-term commitment to nurturing and improving the quality of life along the river through sustainable river management strategies.”

The massive task of managing the Yellow River is a job that does not end. Today, YRCC’s engineers continue to monitor the river daily,  to ensure that it  keeps flowing and with clean, safe water, so that the Yellow River can continue to be the Mother River for the foreseeable future.