Sustainability is a notoriously depressing sector to cover. But Eco-Business found a few stories from 2019 that stopped us from reaching for the Xanax.

Eco-Business tweets from the @OHSustainability account on the rare occasion that something amusing happens in the I-just-wanna-throw-myself-in-front-of-an-electric-bus world of sustainability.

To be honest, that account has been as bare as a polar bear’s stomach in 2019, a year when emissions broke more records, the ice caps shrank, and much of the world’s forests were on fire.

But as unfunny as burning trees, Biblical foods and whales dying on diets of plastic are, there were a few things that made us slightly less gloomy this year.

1. The rise of the eco-aware superyacht owner

An article in British high-life magazine Luxury London struck a nerve with people who care as much about climate change as the fondness of the super-rich for exortionate, polluting boats they use once a year.

Headlined Turning The Tide: The Sustainable Future of Superyachts, one pull-out quote from the story summed up the irony of the 0.0000001 per cent of humanity with so much money and time on their hands, that they have finally started to think about places to sail to when sea levels reach the doorsteps of their mansions.

“Today’s superyacht owners are younger and more in tune with the climate change around us,” read the quote from the magazine, which has produced other worthy reads this year, such as Pier Pressure: Where The Super-Rich Dock Their Toys, and All Hail the Skies: Is this Company the Uber of Private Jets?

Cue some snorting in the socials.

My 300-foot yacht has solar panels on it. We’re saved!

Some of the choice comments on Facebook in response to the article were as follows:

“Nothing says ‘being in tune with the climate crisis’ more than buying a leisure object that pollutes as much as the whole Luxembourg.”

“Ty Uphoff‘s steakhouses are more in tune with their vegan clients.”

“Escape vessels from the poor.”

“In tune with the climate crisis? When those polar ice caps melt, the youthful super-yacht owners will be on those boats quicker than you can say ‘extinction level event’.”

A scathing speech delivered by teenage activist Greta Thunberg at the United Nations in September, when she berated adult-kind for plundering the planet with grey-faced indifference, did not disappoint.

Neither did the parodies.

If you like Greta Thunberg and like acid techno, this one’s probably for you. The How dare you remix:

And if you have a penchant for sweary Australian humour, this one isn’t bad either.

“Washing butts to make them clean enough for recycling does not yet make sense from an economic or environmental perspective,” said a Philip Morris spokesperson in response to our story on when tobacco companies will be responsible for cigarette filter pollution.

At last, an honest ad from a government, to promote the global climate strike in September. It admitted—in, ahem, charming Australian lexicon—that all is not exactly fine and dandy on Planet Earth right now.

In an interview with Eco-Business in November on why local government is key to the climate fight in the Philippines, the ambitious young mayor of Pasig had an interesting way of describing what most of us do on fairly regular basis. “Non-motorised transport option”. Yes, you know, walking.

A thing in 2019 was flight-shaming. People who travel by air are mean. This trend prompted the creation of an app that calculates how many ice caps air travellers have melted while they globetrot. Shame Plane. Go spread it, flight shamers. Go!

According to some reports, about 2,000 Singapore residents turned up to protest against government inaction on climate change in September, inspired by a global movement to push the powers-that-be to do more about climate change.

But the significance of that number was open to debate, according to the country’s national broadsheet, which changed the headline of its story no less than three times.

First “thousands” turned out, then “hundreds”, then just “greenies”, before eventually a “big” number of people were reported to have attended Singapore’s first climate rally, after something of an uproar in social media. One creative soul produced this graphic to document the hairy evolution of a headline. 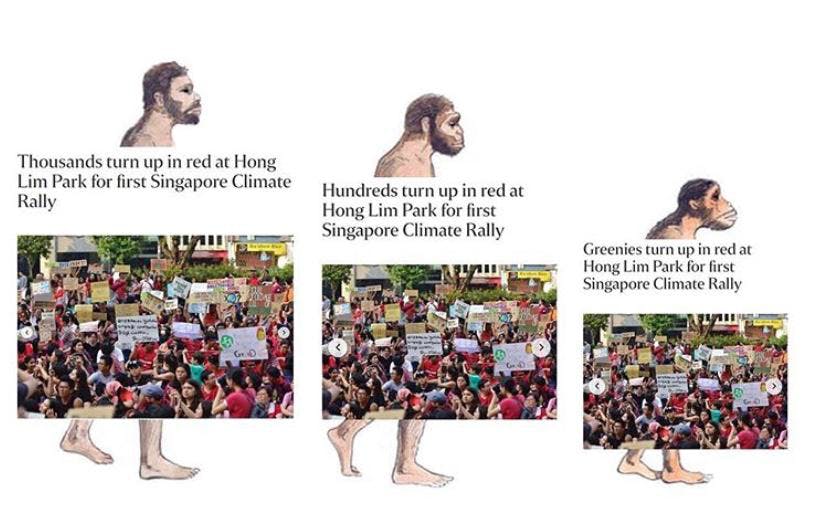 This might only be funny for non-Italians not living in Venice, who were not part of the local government’s decision to not implement measures to tackle climate change in November. 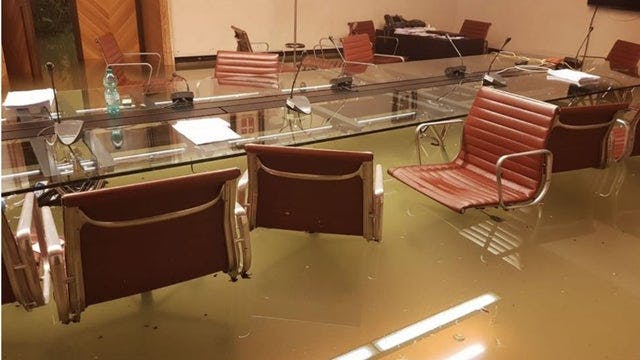 Seeing as Asia is on track to achieve almost none of the United Nations’ Sustainable Development Goals, we might as well get realistic.

Which is why we welcomed, at Halloween, SDGs of a more realistic nature: the Sustainable Development Ghouls. 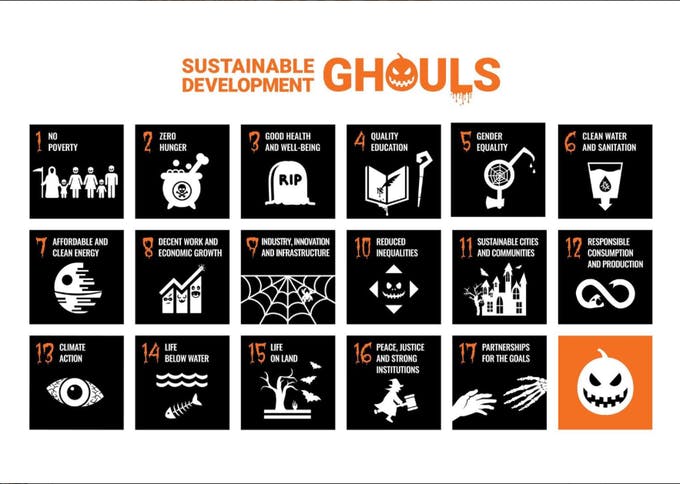 Twitter is the platform of choice for angry climate deniers, and this one’s rebuke of a climate scientist’s literature on the topic might have been more credible had he or she considered using a spell-checker.