When will tobacco companies be held responsible for cigarette butt pollution?

Cigarettes are the world's most littered item and pollute the oceans with toxic microplastic. Philip Morris International, the world’s biggest tobacco firm, says even with biodegradable filters, butt-flicking is not okay.

Though few people would ever say this publicly, it could be argued that, by killing 7 million people a year, tobacco companies are doing the world a favour by keeping human population growth in check.

But tobacco does more harm—or good, if you’re a hardened misanthrope with a disregard for human suffering—than merely killing people.

Smoking pollutes the air with all manner of toxins, farmers fell millions of trees to grow tobacco, dropped cigarettes start forest fires, and tobacco companies emit millions of tonnes of carbon in the curing process, guzzle millions of gallons of fresh water to process their products, and use child labour.

As if that wasn’t a big enough environmental and societal footprint, tobacco companies are now adding to the world’s electronic waste crisis by pivoting towards “heat-not-burn” products like e-cigarettes that are supposedly less likely to kill their users than lighting up a Marlboro.

Taxes on cigarettes have been designed for governments to make revenue and to discourage people from smoking, not for tobacco companies to reduce their environmental impact.

But an often overlooked impact of the tobacco industry is that, of the 5.6 trillion cigarettes manufactured and smoked by 1.1 billion people annually, two-thirds of their butts are dropped irresponsibly, ultimately ending up in the sea.

Cigarette butts, which are made of non-biodegradable plastic fibres, are the most common form of marine litter, and have been reigning ocean pollution champions for more than three decades, according to beach clean up data from Ocean Conservancy, a non-governmental organisation. They are, by far, the most littered item on the planet.

Yet it is the makers of plastic bags, drink bottles and drinking straws that shoulder most of the blame for the plight of the oceans.

And while a cigarette butt is less likely to choke a turtle or starve a whale than a plastic bag, there have been calls from activists in the United States to ban cigarette filters because of the environmental damage they cause.

Researchers have found remnants of cigarette butts, which contain synthetic fibres and a smorgasboard of toxic chemicals used to treat cigarettes, in the guts of 70 per cent of seabirds and 30 per cent of sea turtles.

Cigarette butts take anywhere between 18 months to 10 years to break down in the environment, depending on the conditions, and 12 billion butts are discarded around the world every day.

Marija Sommer, spokesperson for New York-headquarted Philip Morris International, said to tackle the problem requires the three e’s—empowerment, by providing smokers with places to responsibly dispose of cigarette butts; education, making people aware of the damaging consequences of butt-flicking; and enforcement, fines and other ways of punishing litterers. She added that the role of tobacco companies in contributing to the final ‘e’ was obviously limited. 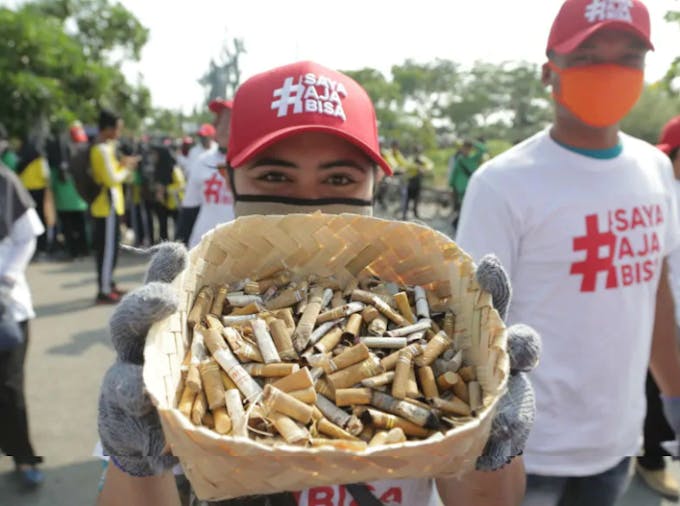 Sommer said that Philip Morris, the world’s largest tobacco firm that makes about US$30 billion a year from selling cigarette brands such as Marlboro and Chesterfield, has been stepping up its efforts to combat littering by getting involved in clean-up operations such as World Cleanup Day, and awareness-raising campaigns.

“We need to tell people [smokers] that it’s not okay to litter. We also need to raise awareness that [butts] contain plastic. Filters are made from bioplastic [known as cellulose acetate], but still, they can take years to degrade,” she told Eco-Business.

Even if we create a biodegradable filter, it will be extremely important not to send the wrong message that it’s okay to litter.

So why don’t tobacco companies, armed with vast resources to pool into research and development, make biodegradable filters? Sommer said a biodegrable cigarette has yet to be invented, that can be handled and extinguished easily and has “the right taste”.

“If it [a biodegradable filter] altered the taste of your favourite cigarette, you might stop buying it,” she said.

And even if the industry developed a biodegradable filter, it would be extremely important not to send the wrong message to smokers that it’s okay to litter, she added.

Woodring argued that it’s much easier for people to casually flick a cigarette butt than drop a plastic bottle or drinking straw. “Education [to stop butt-flicking]? Good luck with that,” he said.

Bad habit for people and planet: smoking by numbers

• 2,500 young people under 18 try their first cigarette every day

• 70 per cent of tobacco-related deaths occur in developing countries

• 15 million people work in the tobacco industry, 1.3 million of them children

• 40 per cent of Indonesian adults smoke, the highest per capita consumption in Asia

• 30 per cent of tobacco consumption and production happens in China

• 3.5 trillion cigarette butts are flicked into the environment every year

• 1 third of e-cigarette brands in the US are single-use, all are non-recyclable

• 3.2 million hectares of land is used to grow tobacco, 1 per cent of total arable land

• 84 million tonnes of carbon dioxide-equivalent emissions are produced by the tobacco industry a year, 0.2 per cent of the global total

To tackle the problem effectively, serious legislation is required, said Woodring. He proposes a butt tax—not to be confused with anti-obesity legislation—where an additional tax is placed on cigarettes that goes towards a fund for cleanup efforts, or a system where smokers are given rebates for disposing of smoked cigarettes at public collection points.

“Without an Extended Producer Responsibility (EPR) law [that makes tobacco companies responsible for post-consumer tobacco waste], or some kind of tax on cigarette butts, not much is going to happen [to reduce butt littering],” he said.

Sommer said that Philip Morris supports policy measures that effectively reduce cigarette littering, including EPR laws for tobacco companies, as cigarette butts could be considered single-use plastic. But she added that such laws “need to make economic and environmental sense”.

“We are often asked why were are not recycling cigarette butts. This is because they are contaminated with toxicants, and washing butts to make them clean enough for recycling does not yet make sense from an economic or environmental perspective at a larger scale.”

Woodring pointed out that recycled butts can be used to make new products. New Jersey-based firm Terracycle has used cigarette butts to make park benches and shipping pallets. Though the recycling process is expensive, Terracycle receives funding from tobacco companies to make the system work.

Though EPR laws for tobacco companies do not yet exist, as they do for other companies that make plastic and electronic products, soon they will, Woodring said.

The world is moving towards EPR systems for all issues, and tobacco companies that make major changes to reduce their environmental impact now could buy themselves time before regulators legislate, Woodring added.

One country that has leant on tobacco firms to help combat cigarette butt pollution is France. If firms did not take voluntary action to address the problem they would face legislation, France’s environment ministry warned. British American Tobacco responding by saying it would work with the government to educate smokers and distribute pocket ashtrays, but rejected the idea of a butt tax. Imperial Brands said it encouraged smokers to dispose of butts responsibly, and had no plans to re-engineer its filters to make them less polluting.

In June, the European Union issued a directive on the reduction of the impact of certain plastic products on the environment, a law that will apply an EPR to the tobacco industry. Companies will have until 2024 to comply.

Sommer said that Philip Morris is “not waiting for regulations” and is already taking action to tackle cigarette filter pollution, and is also well aware of the impact of the heat-not-burn electronic products the company says it wants to replace cigarettes to bring about its mission for “a smoke-free future”.

“We have set up recycling and takeback centres that cover the majority of our [heat-not-burn] devices. This is something we’re doing regardless of the regulations,” she said, adding that the industry needs to work with governments and non-governmental organisations for any measures to be effective.

Electronic devices such as e-cigarettes are much less likely to be littered than regular cigarettes, Sommer added.

Last week, Philip Morris announced a plan to make all of its factories carbon-neutral by 2030.

Though reducing the harm its products do to its customers by encouraging a switch to heat-not-burn products is the company’s main sustainability priority, the firm’s 136-page 2018 sustainability report highlights emissions reduction, biodiversity, deforestation, water, fair working conditions and child labour as other strategic priorities.