Will Pasig City in the Philippines take its place alongside the likes of Kyoto, Paris and Seoul for fostering inclusive climate action? Mayor Vico Sotto highlights how collective action is key to building a low-carbon city.

Ten years ago, typhoon Ketsana (locally known as Ondoy) inundated Metropolitan Manila and brought everything to a standstill. The number of lives lost and properties damaged was staggering, and nowhere was this more felt than in Pasig and Marikina Cities.

Our city – Pasig City – is intersected by three major waterways and several smaller creeks. It is, for the most part, also flat. Given our topography and history, to say that extreme weather events like Ketsana would be catastrophic to our city is an understatement.

The global climate crisis demands immediate and decisive action. Pasig City now has better infrastructure and disaster management practices in place, making the city more disaster-resilient and less vulnerable, but adapting to climate change is not enough – action is required at all levels, even in developing countries, if we are to reduce emissions and thereby avert the worst effects of climate change.

With the national government setting a conditional target of reducing greenhouse gas (GHG) emissions by 70 per cent below business as usual by 2030, it has become even more imperative for local leaders to play a bigger role.

Local governments are key to tackling climate change because we are best positioned to support communities and help mobilise transformative change.

Local governments are key to tackling climate change because we are best positioned to support communities and help mobilise transformative change. We recognise that climate action should be ambitious, inclusive, and bottom-up but we also recognise the key role of local governments as duty bearers and primary drivers of climate action, including their role of providing an enabling environment in which all stakeholders – industry, commerce, residents – can participate in such climate action.

Two years ago, at the Seoul Mayors Forum on Climate Change, Pasig City joined a group of ambitious cities from across the region committed to driving climate action, having been inspired by the inclusive climate programmes and policies in Seoul.

Through the Ambitious City Promises (ACP) Project, we are working with ICLEI - Local Governments for Sustainability alongside peer cities from the Philippines, Indonesia, and Vietnam, to promote participatory and inclusive local climate action. Through this project, we are aiming to increase the space for public participation and collaboration, and solicit stronger commitments from communities in forwarding our goals. Through ACP, we are stepping up our engagement with Pasigueños to better understand their needs and priorities, raise awareness of critical climate issues, and shape local action.

The ACP Project is based on an initiative run by the Seoul Metropolitan Government, where we have seen the successes of inclusive climate planning. Ten million citizens participated in the process that shaped the Promise of Seoul, a comprehensive, ambitious climate action plan focusing on 10 sectors that gives citizens ownership over the commitments of their city, tangible ways to reduce GHG emissions, and building a greener, more sustainable city. 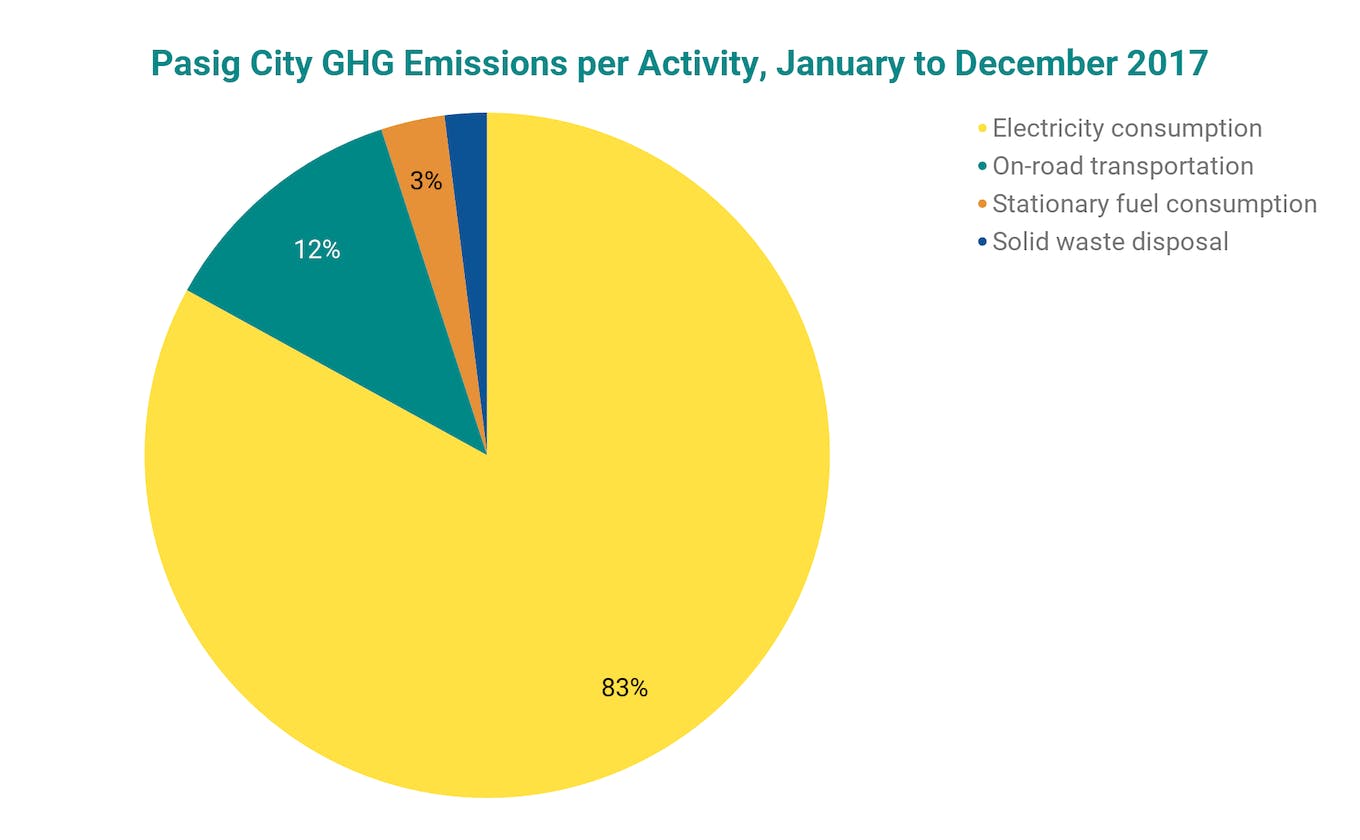 It is the duty of local government to be the primary driver of climate action, whether by directly inducing it, or by providing an enabling environment for such actions to take place.

In this regard, Pasig City is increasingly campaigning to improve energy efficiency and conservation across the city, which would not only lower GHG emissions, but also bring benefits and savings to commerce and industry. For instance, we are now taking steps to effectively implement the local Green Building Ordinance and Rainwater Catchment Ordinance, which mandate public and private buildings to include green building and landscape requirements, adopt sustainable design and construction practices, and implement systems (such as rainwater catchment systems) to efficiently conserve and manage water and energy. 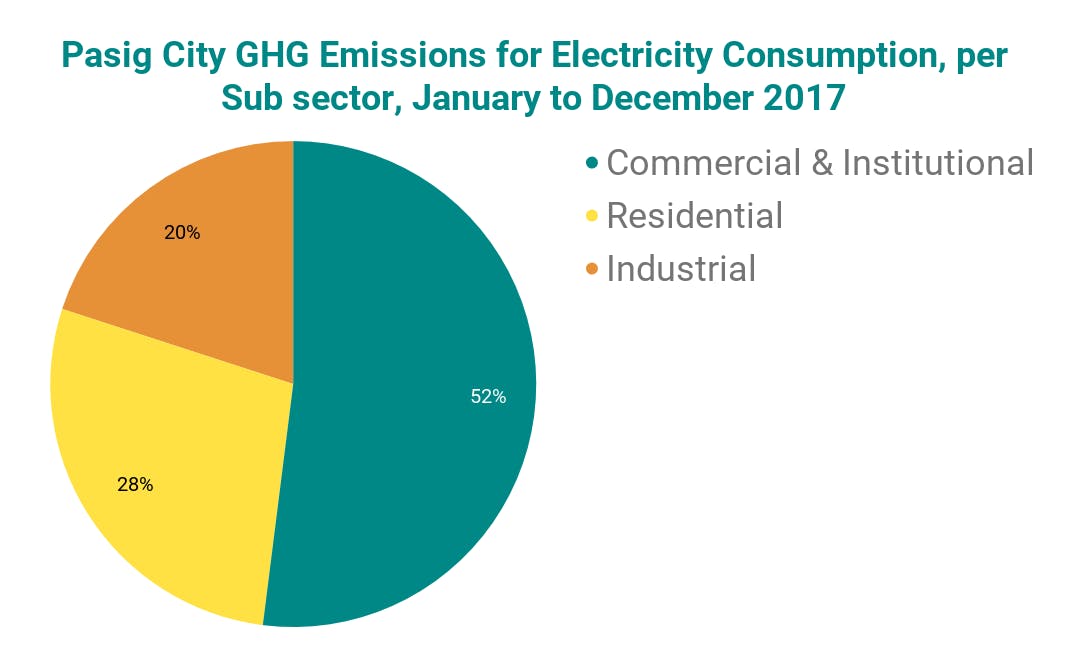 We are also in the planning stages of a new project that will train energy consultants in Pasig City who will advocate for increased energy efficiency and conservation and provide technical assistance to residential and commercial stakeholders on ways to improve energy efficiency at their level.

Pasig City is also currently looking at ways to promote and sustain the use of low carbon public transport, whether through e-vehicles or through non-motorised transport options (walking, cycling), as demonstrated by programmes such as the Carless Weekends and the Pasig City Bike Share. The city has likewise begun installing solar photovoltaic panels to provide electricity not just to our famous Mega Market, but also to our local public schools.

Recognising the role of non-state actors, Pasig City has partnered with experts in the private sector to map out and implement a biodiverse urban reforestation project in our public spaces. This October, Pasig City hosted a local hackathon as a way of crowdsourcing immediate and feasible solutions to climate challenges.

Finally, we are launching a new platform, which will serve not only as an information/education/communication measure, but also as a way for citizens to directly work with us and drive climate action from the bottom up. This platform was developed after discussions with citizens and stakeholders and after considering the findings from the city-level GHG inventory. This platform will, in turn, show us what climate action means to our constituents, and help us strategise and direct policy interventions that ensure a robust and citizen-centric urban planning, particularly for solid waste management, transportation, and energy consumption.

In this new platform, Pasigueños can sign up online and pledge individual, doable commitments relating to energy consumption, low carbon mobility, and sustainable solid waste management efforts, which, collectively, would lead to living more environmentally-friendly lifestyles. Pasigueños can show their support and do their part, while at the same time learn about the benefits of energy efficiency and conservation, composting, and active mobility.

For instance, they can spark change by pledging to take their organic waste to their local urban garden and get involved with the gardening community in their barangay; by borrowing a bicycle from the Pasig Bike Share programme rather than sitting in traffic; or by not setting their air conditioner thermostat to below 25 degrees Celsius. More importantly, Pasigueños can take action as stewards of the environment by sharing lessons on urban gardening, composting, recycling, biking, and other activities to those who are interested in transitioning to a more sustainable lifestyle.

To complement the online platform, similar pledge/information/feedback boxes will be lodged in strategic areas of the City Hall, barangay halls, schools, and other key spaces in the city.

At the launch of the Ambitious City Promises Project two years ago, Mayor Park Won-Soon wrote, “[W]e are strongest when we act together.” To tackle climate change together, we need greater action at all levels, and not just at the level of local government. We are asking Pasigueños to work with us so that together, we can build healthy, liveable, and happy communities.

With these small and continuously evolving strategies, perhaps Pasig City will, one day, take its place alongside Kyoto, Paris, and Seoul as cities that are transforming our approach to climate action.

Vico Sotto is the youngest mayor to be elected in the history of Pasig City. He holds a Master’s Degree in Public Management from the Ateneo de Manila University in the Philippines.