Asia Pacific falling behind on two thirds of SDG targets

A UN report on the region's lack of progress towards achieving the Sustainable Development Goals by 2030 is disheartening. What’s going wrong?

The Asia Pacific region is failing to meet almost two-thirds of the targets set by the United Nations Sustainable Development Goals (SDGs).

The world’s most populous region has fallen behind on 37 out of 57 sustainable development targets, with no progress seen in efforts to protect the oceans and forests, reduce inequality or take action on climate change, according to a report from the UN released last week.

Asia Pacific is performing well on one SDG - quality education.

The SDGs are a series of ambitious targets to tackle global issues such as poverty, hunger, climate change, and gender equality by 2030.

Dr Shamshad Akhtar, the UN’s under-secretary-general, said: “The health of the region’s oceans has deteriorated since 2015. There has been no progress towards protecting, restoring and promoting the sustainable use of terrestrial ecosystems (Goal 15). The protection of forests and the reduction in the degradation of natural habitats has weakened at a regional level since 2015. Goal 13, climate action, is unlikely to be met at the current pace of change.”

Besides environmental targets, efforts to promote decent work and inclusive economic growth (Goal 8), to reduce inequality (Goal 10), and to build justice, peace and strong institutions (Goal 16) have had limited success or shown regression as rapid economic growth has not been equitably shared.

Targets focusing on environmental sustainability for life below water (Goal 14) and life on land (Goal 15) show no improvement. Since 2015, the health of the region’s oceans has declined as more plastic than ever is finding its way into waterways. Life below water continues to be depleted without strong measures to conserve marine resources while Asian countries remain the world’s top five plastic polluters.

Asia’s performance in safeguarding life on land (Goal 15) is faring no better. Since 2015, protection of conserved forests and other natural resources has weakened. Fragmentation of habitats due to deforestation and environmental degradation from extractive industries continue unabated. 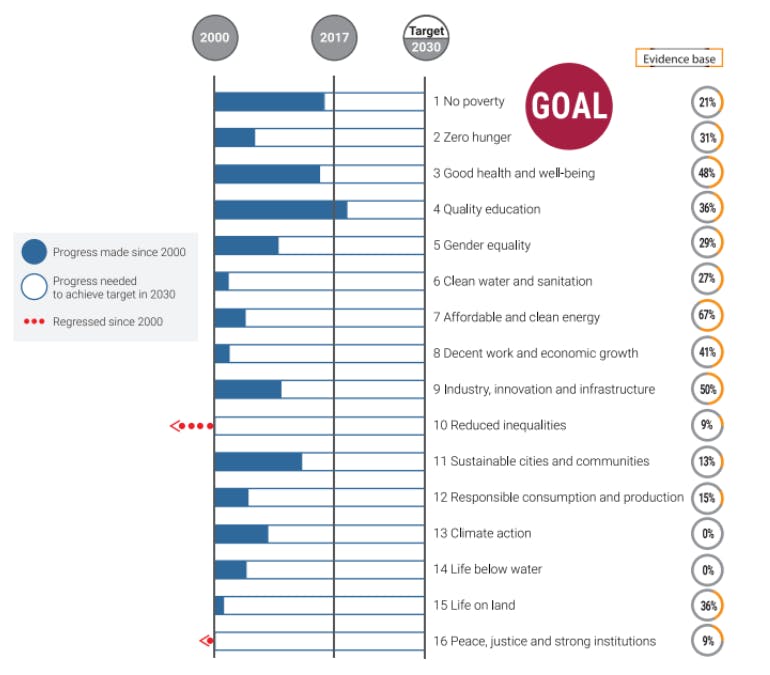 How the region is faring on meeting the SDGs. Source: Asia and the Pacific SDG Progress Report 2017

Most alarming is that there is no official indicator for measuring climate action (Goal 13) or life below water. The analysis was based on proxy indicators to cover goals where sufficient evidence is not available. Instead, the report uses proxy indicators from the online Economic and Social Commission for Asia and the Pacific (ESCAP) Statistical Database as well as external sources.

“The health of the region’s oceans has deteriorated since 2015. There has been no progress towards protecting, restoring and promoting the sustainable use of terrestrial ecosystems.

The report shows that there is an inability to record and track data in the region.

Only 25 per cent of the official SDG indicators can be used to assess progress in Asia and the Pacific for this reason. Such large data gaps call for new data sources and methods of tracking, said Dr Akhtar.