One of the biggest challenges we face in the fight against climate change is that even though it affects everyone, not everyone knows enough nor cares enough about it.

It is a difficult subject, to be sure, with what seems to be equal parts doom and gloomy statistics, making it a challenge to discuss in an everyday setting without casting a pall on the conversation.

In schools, particularly, the challenge is especially pressing. National Public Radio, a publicly funded radio syndicator in the United States, highlighted in a recent report that teachers all over the country struggle with the lack of formal training in the subject, and are particularly stymied in their mission to educate the young because textbooks cannot keep up with the facts.

Little Climate, a graphic book about climate disruption, could help start the conversation and fill the information gap with a younger audience: it is a distillation of the most up-to-date facts about the subject presented in a reader-friendly format with a dose of humour.

It is designed to help readers to not just understand this global phenomenon, but also become interested and invested in it.

Author Suzanne Chew, who is from Singapore and has Masters degrees in both Physics and Environmental Technology from Imperial College, London, is able to use her background in those areas to provide a clear framework of inter-related issues and information to help the reader make sense of the different aspects of climate change.

Her experience with non-profit groups and social enterprises in various parts of Asia and Africa in poverty alleviation and climate change is also evident in the scope of the book, which takes into consideration not just how developed countries impact the environment but also in the effects climate disruption has in other regions.

The strength of this book lies in its well-researched facts that are organised cogently into different sections, providing a flow and logic to the data that would otherwise be overwhelming and disjointed to the reader.

While many books on climate change exist, Little Climate differentiates itself by avoiding didacticism, and approaches this daunting subject in a non-threatening way with light humour and positivity, aided by the vibrant colours and stark lines of the accompanying cartoons.

What readers may find most effective, however, are the infographics. 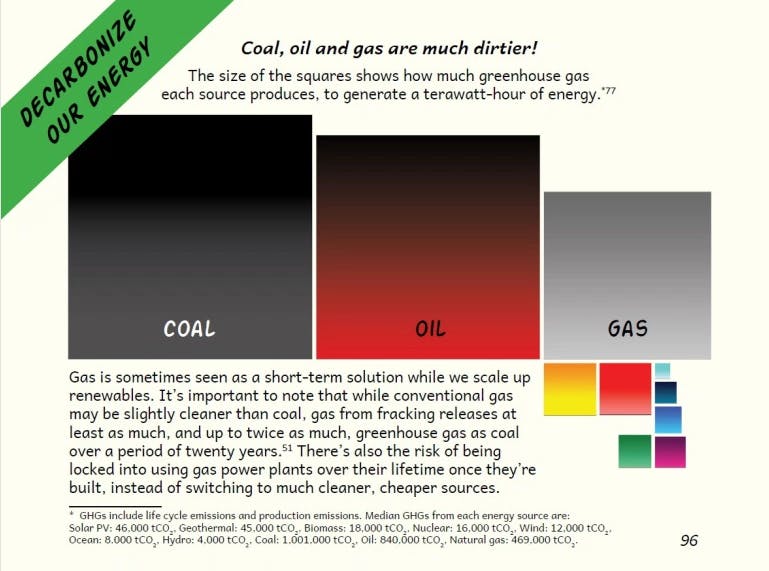 Numbers are given context and proportion for greater impact; in explaining the differences between low and high carbon energy sources, for example, the use of proportionately sized squares to represent how much carbon dioxide each source produces underscores the disparities to great effect.

Equally successful are the author’s explanations of the concepts related to environmental issues and her ability to simplify but not dumb down the more difficult ones.  For instance, she employs the metaphor of a credit card to shed light on the idea of carbon capture and storage technology (CCS), enabling readers to grasp the fact that CCS, like borrowed credit, is only a stop-gap measure in the fight to lower emissions.

While it is billed as a book for everyone, the writer’s upbeat tone fits better as a book to be read aloud to others, in a classroom, for example. Its bold and brightly coloured graphics will also appeal more to a younger audience.

It is not hard to imagine it being used as part of a science lesson in upper primary (or middle school) levels, or even a book to be read at home to your child, not only because of its effective presentation of facts, but also because it offers several practical and easy ways for the individual to make a difference in solving this crisis.

This optimism is as important as it is rare in environmental literature; younger readers especially will find that the lessons gleaned from the book will help them maintain a healthy perspective on what can be done.

If you would like to purchase a copy of Little Climate, follow this link and use the code REACHFOR350PPM for a 35% discount.