A bolder carbon target and a serious shift to EVs: what can the Philippines do to hit 2022 climate targets?

As the dust settles following Glasgow’s climate summit, the Philippines needs to take some immediate steps this year so it can achieve ambitious decarbonisation goals.

The 26th Conference of Parties (COP) ended with the failure of developed countries to deliver the promised US$100 billion of climate finance, disappointing poorer nations who pushed for the financial facility to deal with loss and damage caused by natural disasters.

This would serve as a mechanism for high-polluting nations like the United States and European countries to pay reparations for causing the climate crisis.

Although developed nations renewed their pledge to achieve this by 2023, the discussions around reparations were instead delayed for the next COP in Egypt later this year. It is little wonder that the negotiating blocs have accused rich nations of “damaging trust” among members.

Well-heeled countries and their approach of “kicking the can down the road”, is a hopeless solution for us sitting in climate disaster areas with little financial buffer to swallow the costs of damages.

Barely two months after the climate summit, typhoon-prone Philippines, where I live, was once again battered by a cyclone that forced hundreds of thousands of people to flee their homes. The death toll is nearing 400, with thousands of people injured and others still missing.

What we can hope for is that the incumbent leader can be replaced by someone who is more progressive on climate change issues and will be open to improve our targets, as a national election to choose his successor is due in May.

Typhoon Rai rapidly intensified into a super-typhoon just 24 hours before landfall, in a phenomenon made more likely by increasing global temperatures. The disaster has so far cost the country some US$795 million. While a black swan event, it was the type of disaster climate vulnerable nations had warned of during the climate conference.

For an economy still reeling from the impacts of the Covid-19 pandemic together with the increasing likelihood of extreme weather, richer nations that are climate culprits, should be taking calls for climate finance more seriously.

Amid the disappointing absence of progress from rich countries, environmentalists have been prodded to call for stronger climate action at home.

As the dust settles following November’s climate summit, what can the Southeast Asian nation do to compensate for the conference’s failures as well as reinforce its wins? Here are some policies needed this year to bring the country to the forefront of its low-carbon goals.

Insufficient funding from developed nations at COP26 may hinder the Philippines’ ability to meet its commitment to reduce carbon emissions under the Paris agreement called the nationally determined contributions (NDC). But the country should also do its part by having a more detailed target.

It aims to cut its greenhouse gas emissions by 75 per cent from 2020 to 2030, but the target is conditional, and will only be met through foreign aid. The government has pledged to use its own resources to meet the remaining 2.71 per cent.

But a high conditional target is not the only way for finance to happen, said Lea Guerrero, country director of Greenpeace Philippines.

“Commensurate strategies and plans that outline how to reach that ambition are also needed to access finance. The current administration needs to improve that ambition in the NDCs and involve different stakeholders in the planning process to ensure we have a better chance of accessing finance,” Guerrero said. 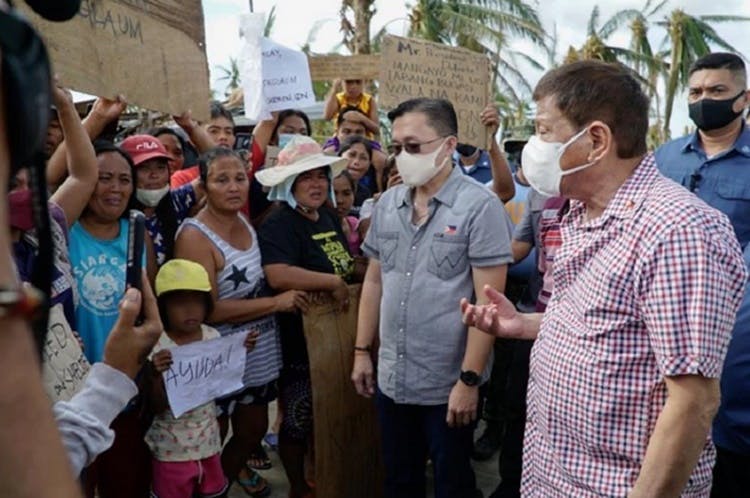 President Duterte (far right) visits Siargao Island, Philippines in the aftermath of Typhoon Rai on 22 December 2021. The Duterte administration has been criticised for not having a concrete disaster preparedness action plan. In his speech during his visit to Siargao, he joked that typhoon victims squat on private property and build new houses from all the coconut trees felled by the storm, eliciting laughter from his audience. Image: Office of Senator Bong Go

Such strategies require a detailed NDC that identifies our climate-related needs and the cost of each. But crafting one takes time as we calculate not only current, but future climate change mitigation needs. We also need to include the amount of emissions we will be able to curb as the country transitions to clean energy.

The Paris Agreement decision in 2015 requested parties to communicate every five years either a new or updated NDC. Parties may also revise their existing one before the next COP.

However, it is likely to be difficult to amend our country’s NDC within the year, judging from how long and contentious it was for Philippine president Rodrigo Duterte’s administration to get the existing one finalised.

Duterte has been known to give speeches championing the welfare of the climate, but these are not often coordinated with the rest of the government’s energy plans. For instance, his administration announced in 2020 that it will stop constructing new coal-fired power plants, but the country’s NDC does not include specific steps on how to achieve this, such as an outright ban on coal.

What we can hope for is that the incumbent leader can be replaced by someone who is more progressive on climate change issues and will be open to improve our targets, as a national election to choose his successor is due in May.

At COP26, the Asian Development Bank heralded a fund that will buy up coal plants in the Philippines and Indonesia and retire them early, replacing them with renewable energy alternatives.

Called the Energy Transition Mechanism (ETM), the fund was launched during the summit, with the Philippine and Indonesian ministers as panelists, along with financial partners IKEA Foundation, the charitable arm of the world’s biggest furniture retailer, and the Rockefeller Foundation.

More than half of the total of the Philippines’ power generation comes from coal, and is projected to have the highest share of coal in the power mix for the region in 2030. If the ETM goes as planned, it could retire half of its coal fleet over the next 10 to 15 years, much sooner than their average lifespan. 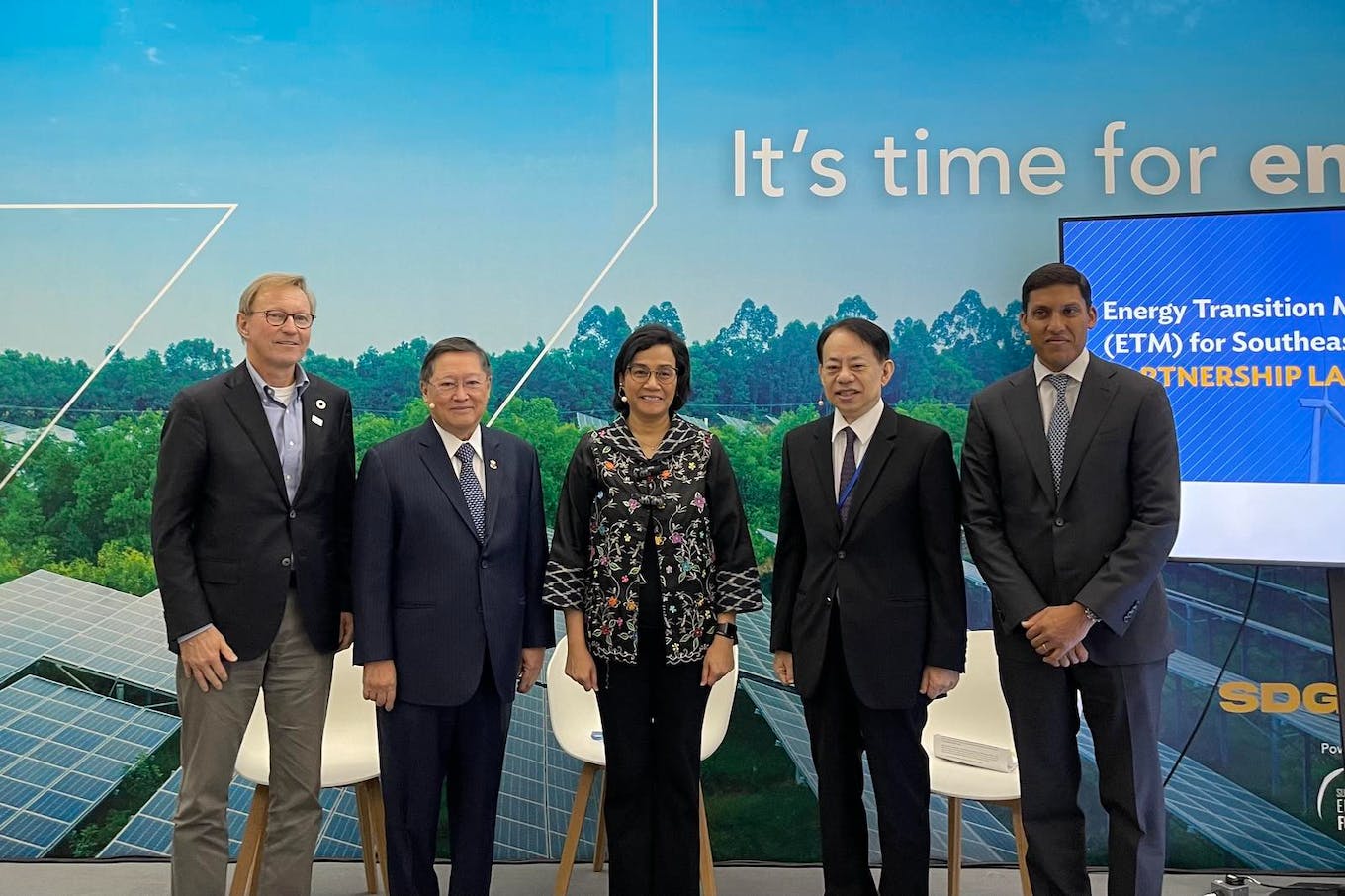 The ADB launched the ETM at COP26 in Glasgow, Scotland. Financial partners IKEA Foundation and the Rockefeller Foundation joined the launch. Other supporters of the fund include financial firms British insurer Prudential, lenders Citi and HSBC and BlackRock Real Assets. Image: Philippine Department of Finance

Civil society groups (CSOs), including NGO Forum on ADB, Greenpeace and Friends of the Earth, rebuked the multi-lateral bank for announcing the mechanism at the high profile climate summit when it still lacked “granular information …and many questions which remain unanswered and under-evaluated on its capacity to assist developing member countries in raising their climate ambition.”

A month after the summit, we were hopeful that the ADB might have progressed with more direction for a much-publicised initiative. But a spokesperson merely said that the bank will be forming an advisory group with CSOs to determine which communities could be impacted by retiring of coal projects, but it is in a “very, very early stage of the feasibility study and we don’t have any more details about that to give you beyond what we announced at COP26.”

For all the promotion ADB has done for the ETM at the summit, even featuring videos and reactions from prominent leaders about it on its website, we expect that it will be able to disclose more of its progress in 2022, especially because of what its success will mean for the country’s emerging clean energy transition. 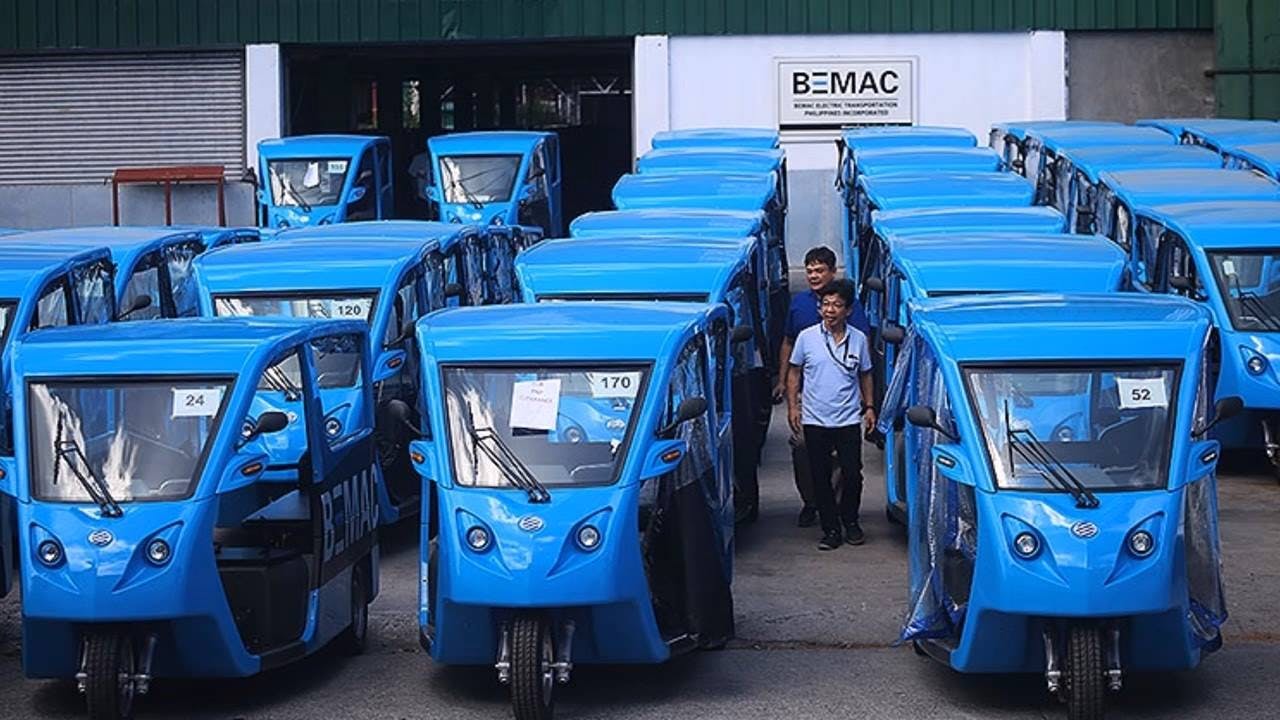 A COP26 declaration to sell only cars and vans with zero emissions by 2040 or earlier should signal more manufacturers, especially in emerging markets like the Philippines, to shift to electric vehicles (EVs).

Although the country’s NDC targets a 10 per cent increase in the penetration rate of electric vehicles by 2040, legislation for the use of electric and hybrid vehicles and the establishment of electronic charging stations in the country is still sitting with lawmakers.

Amelia Supetran, a veteran Filipino climate advisor, said the country may not feel the urgency of shifting to clean energy technologies like EVs because we only contribute .35 per cent to global emissions.

If countries like the Philippines are not going to participate in producing climate-friendly solutions, developed countries are going to eventually impose indirect trade sanctions for developing countries.

Under the Paris Agreement, low-emitting developing nations like the Philippines which do not have sufficient capacities to tackle climate change are not expected to cut their carbon emissions as much as richer, more pollutive nations. But this will not last very long, Supetran warned.

“If countries like the Philippines are not going to participate in producing climate-friendly solutions, developed countries are going to eventually impose indirect trade sanctions for developing countries,” Supetran said.

For instance, she said that when supporting projects of developing countries, the United States Agency for International Development (USAID) applies a border tax adjustment to imports that are not climate-friendly. The European Union is mulling similar policies. If imposed, it could result in Asia’s emerging markets being shut out of prime export markets.

4. Review the lifting of open-pit mining to curb forest loss 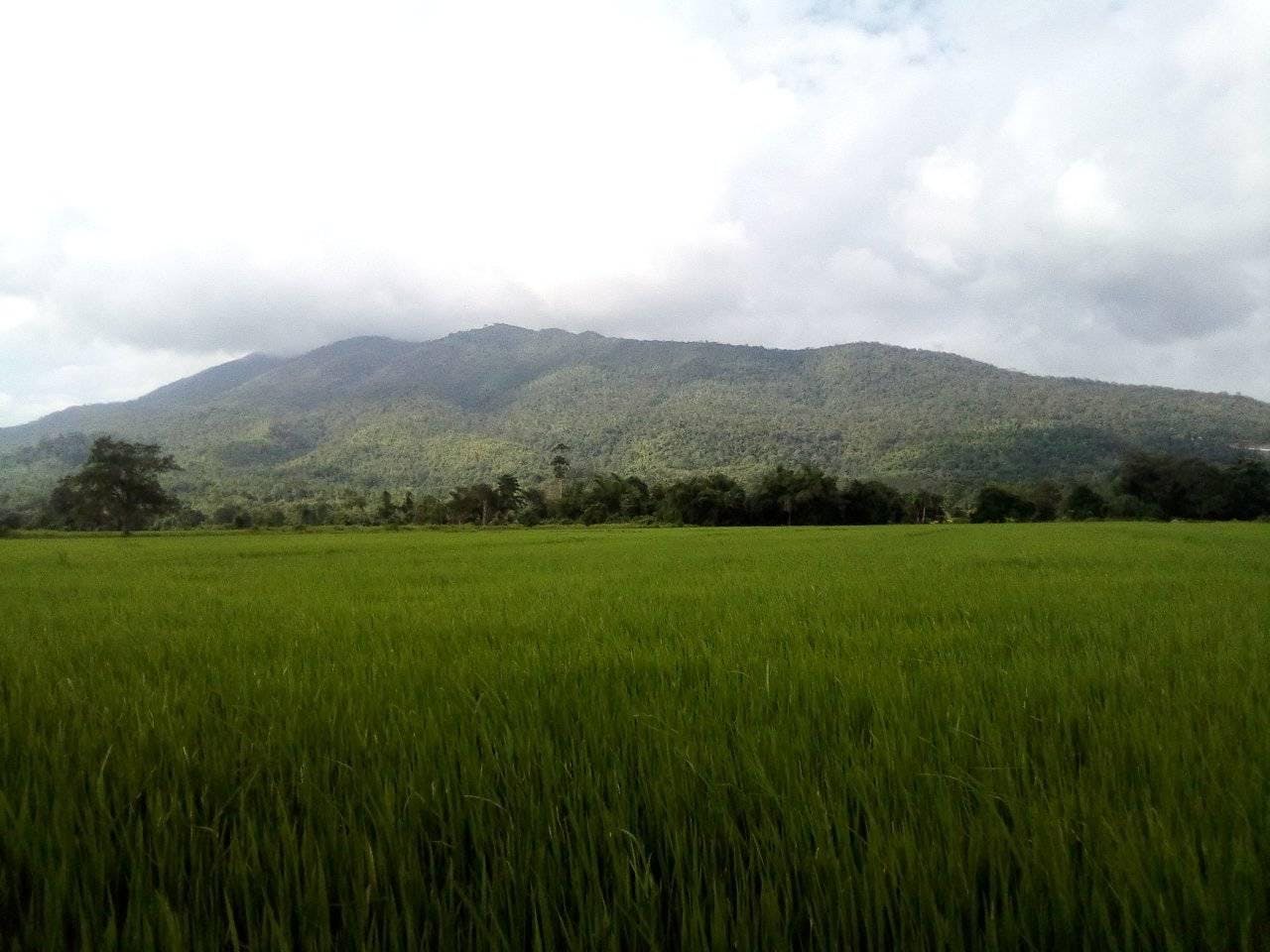 Palawan’s Mt. Bulanjao, a rainforest system considered by indigenous peoples as their ancestral home, faces the risk of degradation as a nickel mine is set to be expanded in the area. Image: Mt Bulanjao Facebook page

Last year’s COP made a commitment to halt forest loss and land degradation by 2030. The Philippines signed up to the pledge despite forest action not being found in its NDC. It has already lost more than 154,000 hectares of forest cover, an area the size of London, in recent years largely due to logging, despite a log ban and protection laws.

Mining is one of the key drivers of deforestation, as trees are felled to get to the ores underneath the forests. This is why the overturning of a 2017 ban on open-pit mining in December has stoked fears among forest communities, like the tribes and farmers near Mt Bulanjao in Palawan where authorities have started to rezone a rainforest to allow mining.

The order to reverse the ban came after an April 2021 decision by President Duterte to lift a nine-year moratorium on granting new permits, which the government claimed would revive the Philippines’ economy amid the Covid-19 pandemic. It noted that a “globally accepted method of mining” for deposits lying near the surface of the earth would be applied, including the rehabilitation of mines.

“Despite claims of rehabilitation like reforestation, the impacts of mining operations, especially open-pit mining, are irreversible,” said Lia Mai Torres, executive director of the Center for Environmental Concerns, a non-profit that helps communities confront environmental challenges through education and community-based research.

“The expansion of agribusiness plantations that are considered forests by the government threaten the actual forest areas. Reviewing laws and programmes that allow these activities is the first step. Reforestation alone is not enough,” she said.

Increasingly, climate policies may be sacrificed by governments looking to curry favour with its electorate — particularly ahead of elections. A short-term populist outlook cannot come at the cost of protecting the country against an inevitable, inescapable long-term climate crisis.