Five years of Duterte: Has sustainability in the Philippines won or lost?

In the wake of Philippine President Rodrigo Duterte's final State of the Nation address, Eco-Business reviews his government's wins and losses in the climate and energy sectors over his last five years in power.

Philippine President Rodrigo Duterte’s state of the nation address (SONA) on Monday may not have highlighted many of his government’s sustainability achievements, but there have been notable battles won in the energy and climate landscape over the last five years of his administration.

There was the clean-up of world-renowned beach island Boracay, the return of an illegal waste shipment back to Canada, moves away from coal by key finance institutions, and the coal moratorium of 2020.

But green groups say credit must not be given solely to the Duterte administration, rather to the “collective effort of communities and movements who braved intensifying ecological challenges and the climate of impunity that this government has created.” 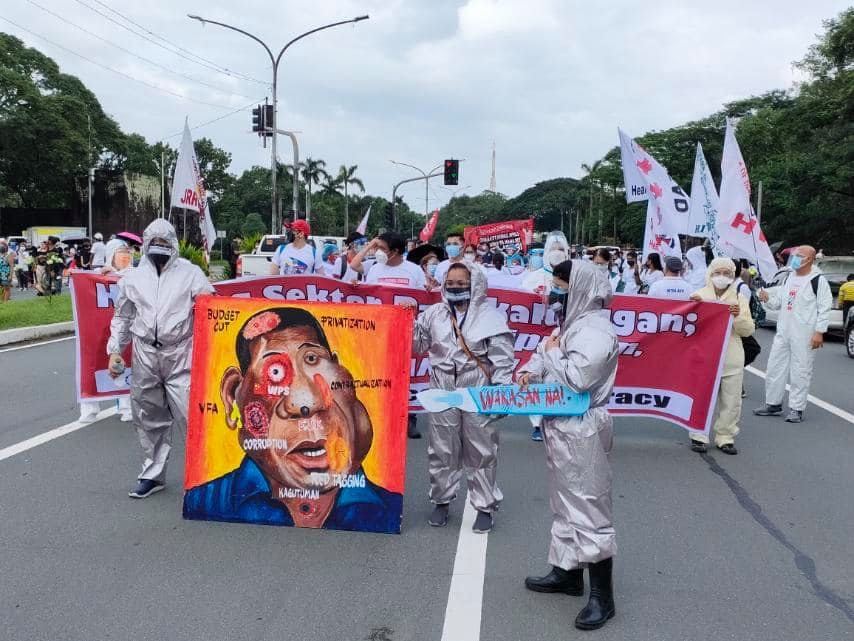 Health workers join the protest rally at the University of the Philippines before President Rodrigo Duterte’s State of the Nation address. Image: Alliance of Health Workers

“It is precisely because of the inadequacies of this and past administrations that much work is left to be done today,” said Gerry Arances, convenor of Power for People Coaltion (P4P), a network of civil society organisations, communities and cooperatives that rally against fossil fuels.

“As Duterte delivers his last SONA, we find ourselves in a context that requires Filipinos to unite and work for a people-centered sustainable energy sector and demand leadership that would bring this about moving forward.”

In the wake of the final state of the nation address of the Philippine premier, Eco-Business reviews the government’s key achievements and failures in the climate and energy sectors over the last five years. 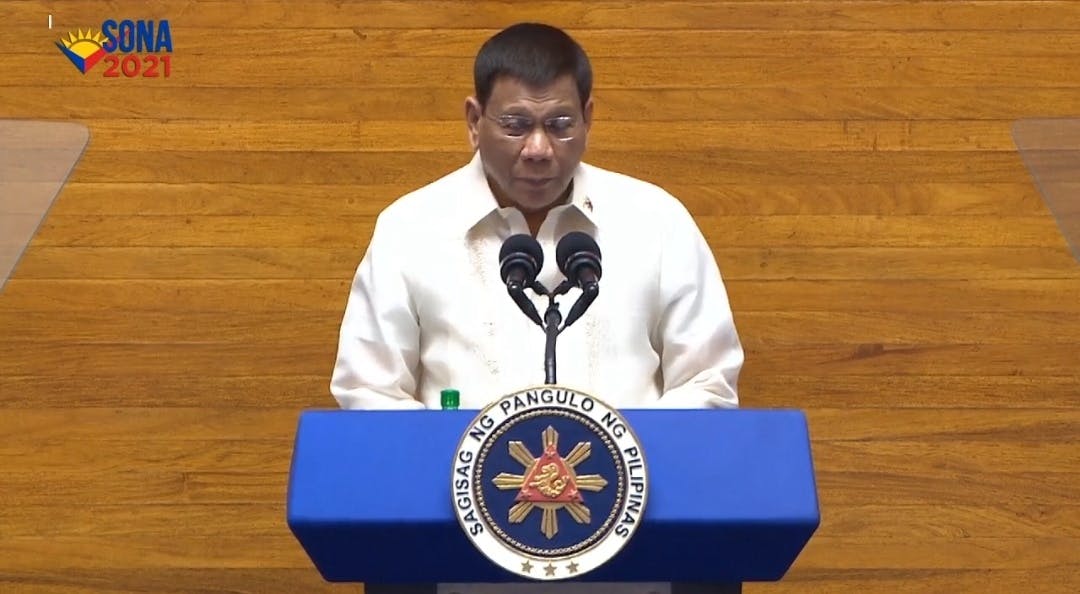 The Duterte government announced in 2020 that it will stop constructing new coal-fired power plants, signaling a shift in the country’s energy policy.

After all, the Philippines is projected to have the Asia Pacific region’s highest share of coal by 2030, and the new policy could stave off about 10 gigawatts (GW) of coal in the pipeline. However, the decision does not include 4GW of previously approved projects, apart from the 9.8GW currently installed.

The policy announcement was lauded by activists although not without scepticism, as industry experts said it was not coordinated with the rest of the government’s energy plans.

For instance, six months after the policy announcement, the Philippine government submitted to the United Nations its target to reduce harmful greenhouse gases by 75 per cent by 2030.

The target, known as a nationally determined contribution to the Paris Agreement, was heavily criticised by activists as most of it is conditional on funding and assistance from the international community. It does not include detailed steps on how to meet its target, such as an outright ban on coal.

Moreover, the latest draft of the Philippine Energy Plan, which charts the country’s energy landscape until 2040, has yet to reflect the moratorium and still proposes a significant share of coal in the energy mix of 58.9 per cent by 2030.

Almost 12 years after the Supreme Court ordered a comprehensive clean-up of Manila Bay, it was in Duterte’s term that the massive rehabilitation began for the country’s most important body of water, which is one of its most polluted.

Similar to Boracay, which faced a six-month closure in 2018 to solve its garbage woes, Duterte announced the following year the clean-up and rehabilitation plans for Manila Bay, threatening to close down establishments, particularly hotels, that allow waste to contaminate the bay that also serves as the country’s hub for local and international ports, shipping and fishing.

However, the rehabilitation effort was slammed by environmentalists when artifical white sand made from crushed dolomite was dumped on the shoreline of the bay as part of the beautification project.

Dolomite, a non-metallic material used in manufacturing bricks, cement, concrete, plastics and other construction materials, contains varying levels of crystalline silica, which builders say can cause lung damage or even cancer when breathed in.

Environmentalists decry the dumping of truckloads of crushed dolomite in the baywalk of Manila Bay in 2019. Image: Nilad

Environmental group Oceana Philippines likewise warned that since dolomite does not naturally occur in the bay, the sand could destroy its natural ecosystem.

Lawmakers called the artificial sand a waste of public funds as the estimated cost of the entire Manila Bay rehabilitation project was about US$7.7 million, of which around US$557,000 was allotted for the dolomite overlay.

Amid the criticism, rehabilitation efforts pushed through, including continuous bay and drainage canal cleaning and the setting up of sewage treatment plants.

Last year, the government cited the inauguration of the solar-powered sewage treatment plant as one of the highlights of the programme, as the plant is said to be capable of treating 500,000 litres of wastewater discharge per day that contributes to the pollution in Manila Bay.

Duterte stunned environmentalists in April when he lifted a nine-year moratorium on granting new mining permits, which the government claimed would revive the Philippines’ economy amid the Covid-19 pandemic.

This, despite openly criticising the mining industry for the environmental degradation it has caused when he assumed office in 2016. He even imposed a ban on open-pit mining in 2017 and appointed Gina Lopez, a staunch anti-mining advocate, as environment and natural resources secretary. 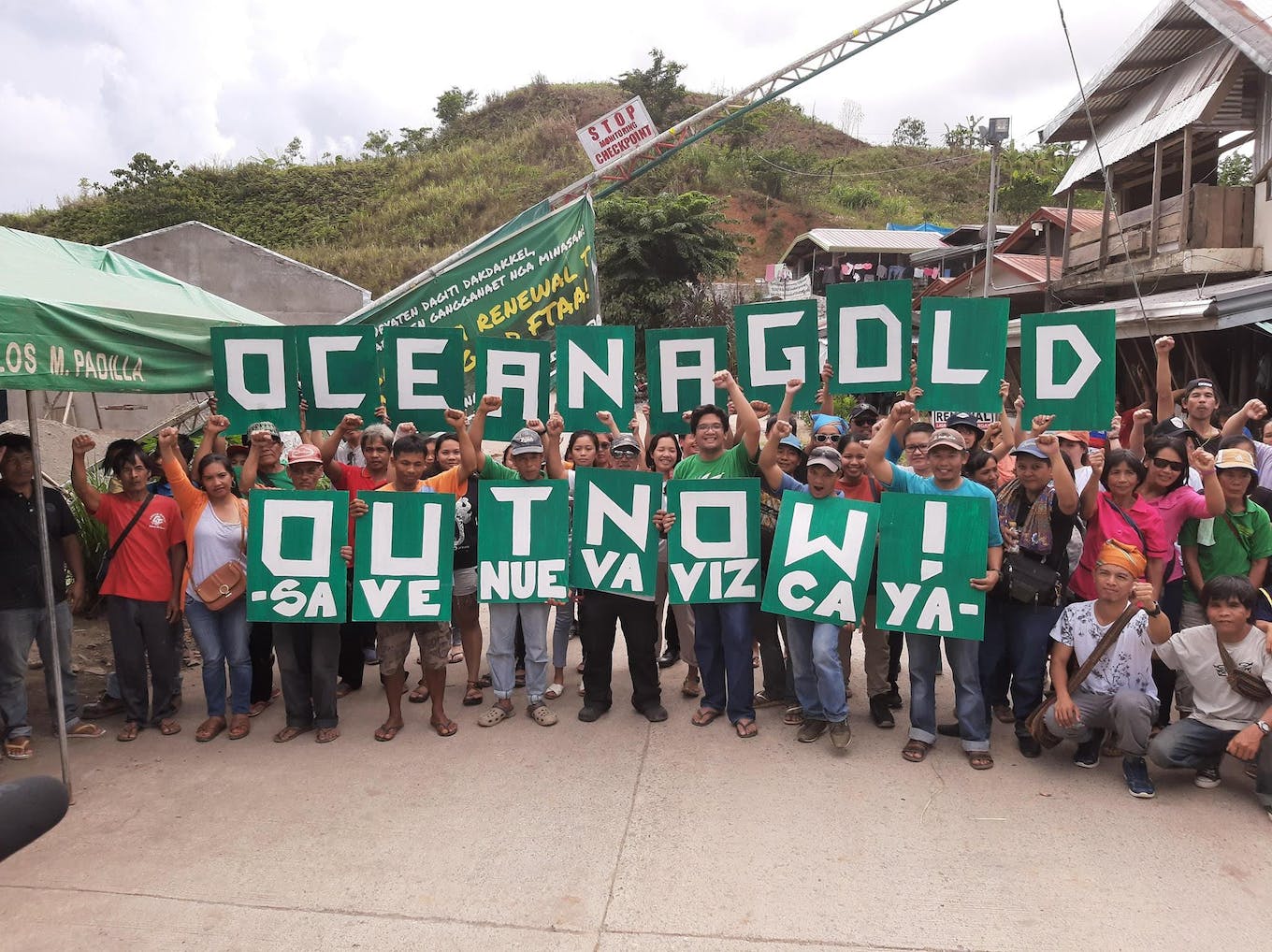 Residents in the town of Didipio, Nueva Vizacaya oppose the reopening of the OceanaGold copper-gold mine in 2019. Image: Mining Injustice Solidarity Network

But by 2019, Duterte no longer mentioned the mining sector in his SONA, even though he had done so in the past. The following year, the department of environment and natural resources recommended the reopening of mines shuttered under Lopez’s watch, including giving Canadian-Australian mining firm OceanaGold a new 25-year license for the Didipio copper-gold mine in Nueva Vizcaya despite protests from community groups.

It was reported in 2019 by the Special Rapporteur of the United Nations Office of the High Commissioner on Human Rights that OceanaGold allegedly committed human rights violations against indigenous people in the mined area.  The alleged violations included beatings and suffering injuries while houses were bulldozed off cliffs and burned down after forced evictions were carried out without a court order.

Call for a climate emergency declaration as Duterte’s legacy

After Duterte spent almost three hours on his final address, environmentalists expressed dissatisfaction with how he failed to lay out actions that the administration would take to approach the climate crisis during his final year in office.

Greenpeace renewed its call for the president to declare a climate emergency as part of his legacy, since the resolution was passed by the lower house of Congress last year.

A climate emergency declaration would compel the administration to position climate action as the central policy of the state, and recognise that the climate crisis is not just about disasters, but about a crisis for food, water, oceans, and biodiversity, and also about livelihoods, public health, jobs, and “a roof over one’s head,” said Lea Guerrero, country director of Greenpeace Philippines.

Guerrero added: “While President Duterte mentioned ‘resilience’ several times in his speech, along with small wins for farmers and public transportation, we know that the country cannot attain resilience from current and future crises without concrete and coherent plans to facilitate a people-centered action to address the multiple crises the country is facing.”

“The Duterte administration must do more to prioritise solutions that empower communities and future-proof our country so that we can achieve a better normal,” she said.