A German startup is aiming to scale its social forestry model in Indonesia with the help of the country's huge timber concession holders. CFO Paul Schüller says his firm can reverse deforestation by giving local communities a sustainable livelihood of timber, cash crops and carbon credits.

Last year, 11 million hectares of tropical tree cover disappeared. If forests continue to be lost at the current rate, they will be mostly be gone by the end of the century, scientists warn.

A new type of forestry aims to reverse forest loss, lock-in their carbon value and give the people who live in and around forests a bigger stake in their future.

One of its proponents is Fairventures Social Forestry (FSF), a German startup operating in Indonesia, a country that has lost 18 per cent of its forest cover to extractive industries and agriculture since 2000.

FSF enrolls farmers in a programme to cultivate timber crops on degraded land, and connects them with global buyers. By giving the farmers a sustainable livelihood, there’s a better chance that forests stay standing.

The opportunity for FSF came about in 2008, when the Indonesian government granted 10 per cent of state land for indigenous and local communities to manage in the form of social forestry permits. These permits run for 25 years or more and can cover thousands of hectares.

In 2018, FSF made a deal with the farmers’ cooperative that holds the social forestry permits, and set about recruiting farmers to join its agroforestry network.

FSF’s first project area is in HKM Batu Bulan, a remote district in Central Kalimantan. The aim is for the project to span 100,000 hectares over the next 10 years by enrolling hundreds of farmers in the programme.

Most farmers in Central Kalimantan work on small pieces of land and are typically involved in illegal logging or gold mining, says Paul Schüller, chief financial officer of FSF.

“They lack the technical knowledge [to cultivate timber sustainably], or access to capital and offtake markets to make the best use of these forestry permits. We can provide all three,” he says.

To date, FSF has distributed commercial timber seedlings and training to more than 1,000 farmers. 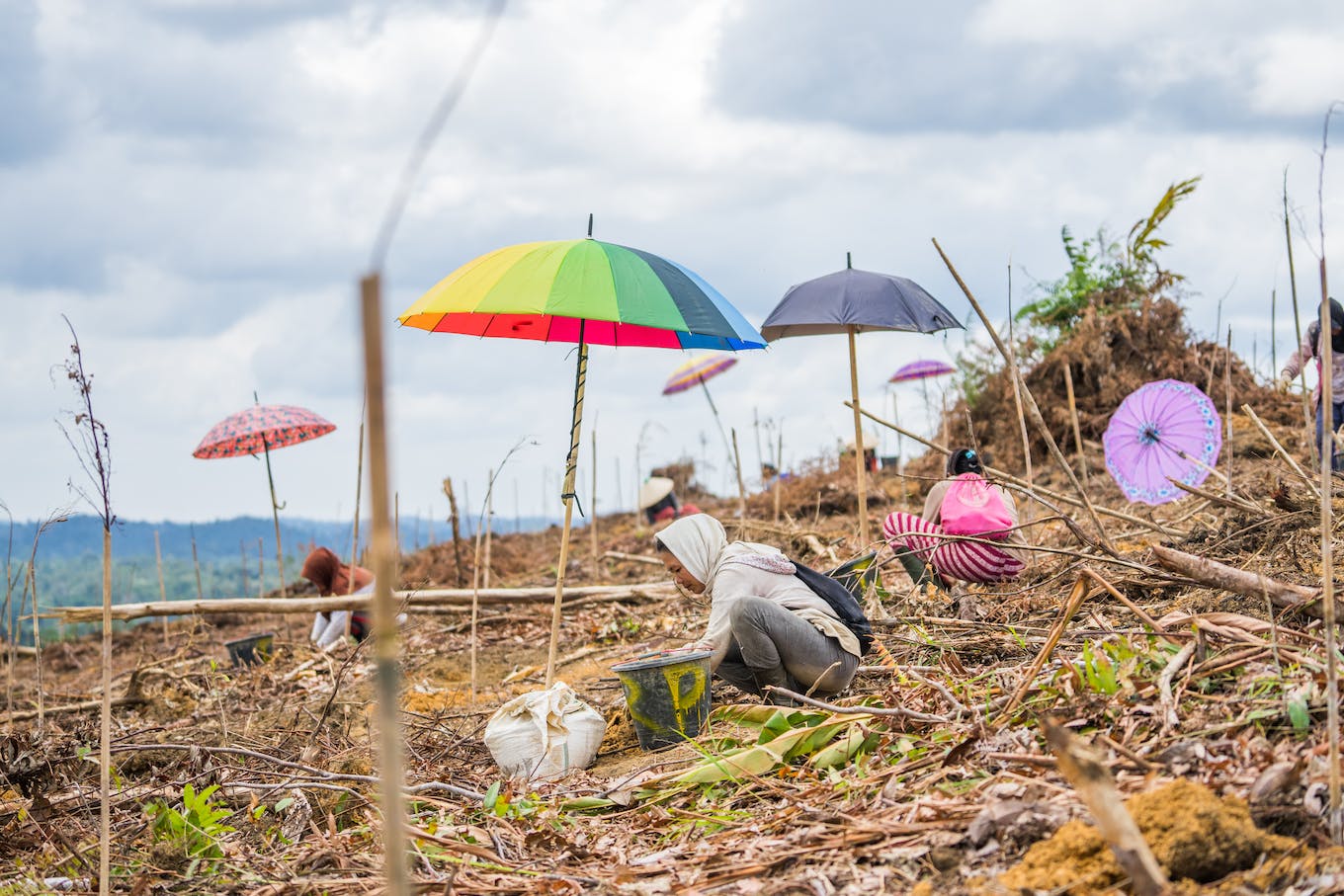 The project in HKM Batu Bulan also enables farmers to grow cash crops such as ginger and coffee and sell their produce on the global market.

These crops are planted around the timber seedlings, creating a diverse agricultural patchwork that keeps the soil healthy and productive.

FSF also aims to generate revenue from carbon credits, which come from growing crops on degraded land and from conserving forests.

But the carbon part of the revenue model is tricky, Schüller says, because of a law that prohibits carbon credits to be sold on the international voluntary carbon market.

For now, FSF aims to generate 80 per cent of its revenue from timber and cash crops and 20 per cent from carbon credits, although that ratio may change as the project matures.

To scale the venture, FSF is hoping to strike partnerships with Indonesia’s huge timber concession holders, which have access to vast areas of degraded land that could be used for social forestry.

In this interview, Schüller, whose company won the 2022 edition of sustainability innovation competition The Liveability Challenge, tells Eco-Business about the challenges the project faces in achieving scale.

How do you ensure that the money generated cash crops, timber and carbon is shared with local communities living in the social forestry permit areas?

First it’s important to note that we transfer knowledge to local community members — it’s not only about executing the work. They also get a salary from the field work and a share in the profits.

How much of FSF’s profits are shared with local communities?

The major source of income for the local communities comes from their salary. The profit-sharing is rather limited. But the two components [salary and profit-share] added up come to about 15 per cent of the total revenue generated from the project.

You don’t achieve much by talking about models and structures with PowerPoints presentations or Excel spreadsheets. The value in what you’re doing is recognised when you create job opportunities.

How does their income compare to what they could earn from competing industries?

About 35 to 40 per cent more than an alternative income, averaged out over the year. But I should stress that we create sustainable income opportunities. Many of the jobs in the area are seasonal, and in unsustainable industries such as gold mining.

We follow the World Resources Institute definition — land that has less than 10 per cent tree cover and carbon sequestration potential that is less than 35 tonnes of CO2 equivalent per hectare.

What are the key challenges your project faces?

The first is land classification analysis. In the beginning, we overestimated the plantable area of degraded land in HKM Batu Bulan. How? Because we used satellite images — we weren’t very advanced at using drones early on. 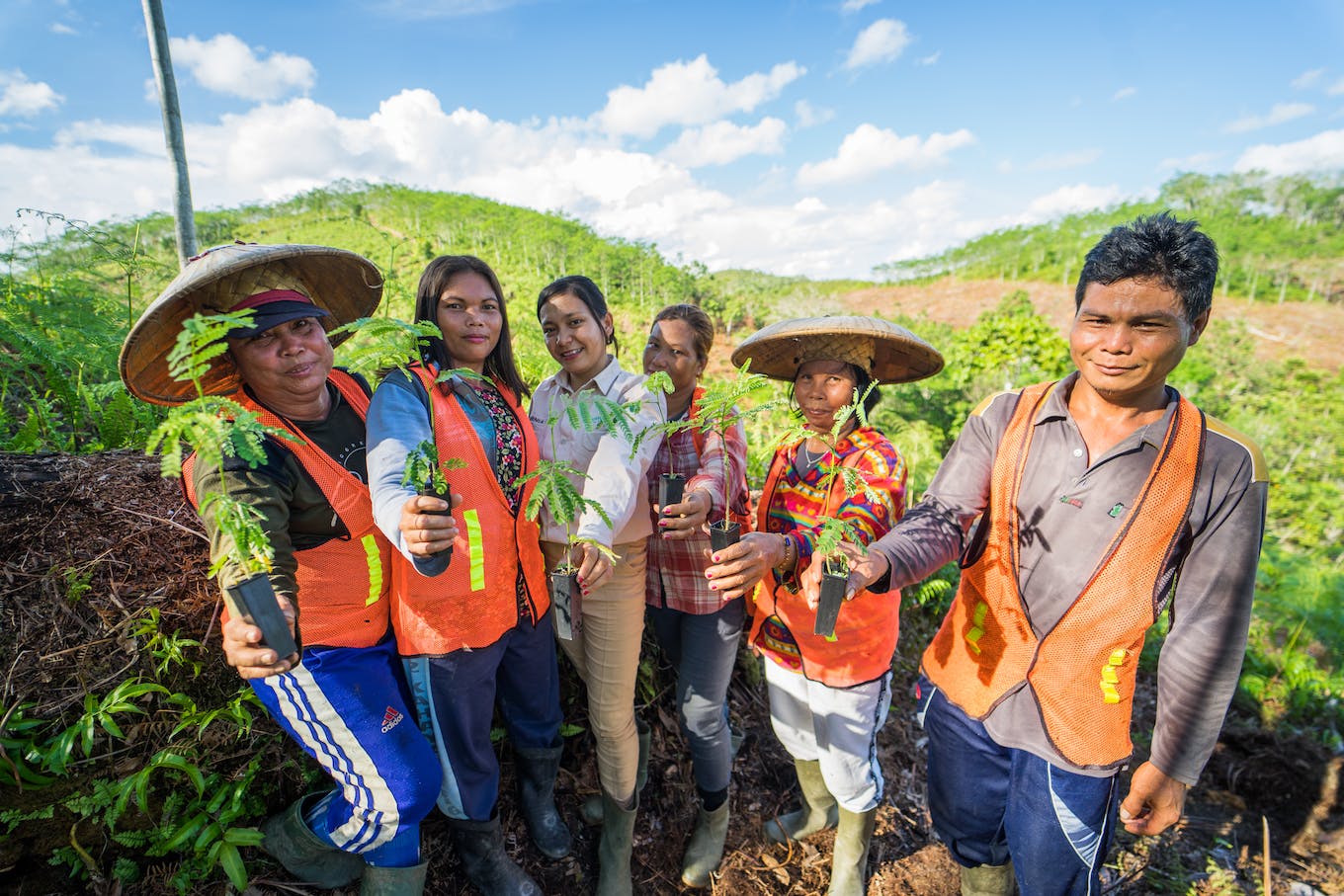 Has the project been hard to sell among the local community?

In the beginning, yes. If the smallholder farmers are not excited about joining the programme, you have a problem because you don’t get the number of hectares you need for the social forestry permit setup.

Understanding the local culture of the community members is key. You don’t achieve much by talking about models and structures with PowerPoints presentations or Excel spreadsheets. The value in what you’re doing starts to be recognised when you create job opportunities.

To get more farmers to chip in their land and join the collective, we appoint ambassadors — smallholder farmers with a good reputation who are already part of the programme — who can spread the word. We also organise farmer festivals to gather people for dinner and inform them about the programme.

What are your key ambitions for the project?

The overarching goal is to have a portfolio of 100,000 hectares 10 years from now. To meet this target would require 20 or 30 more social forestry permits. This is why we are looking to develop opportunities within timber concessions in Indonesia.

We have signed a memorandum of understanding with the Association of Indonesia Forest Concession Holder (APHI). This gives us access to its members, which have extremely large concessions — each with 50,000 to 100,000 hectares per concession— and have large areas of degraded land.

This is a great opportunity for us. Because often there are local communities living on or near this degraded land, and the concession holders are not currently generating any revenue out of the land, nor do they have the technical knowledge or the socialisation skills to run a social forestry programme.

There is legislation that pushes concession holders to create more local jobs and work in more sustainable ways that support Indonesia’s nationally determined contributions [Indonesia’s targets that support the Paris Agreement on climate change]. Our model could play an important role in sustainably developing those assets.

How would working with timber concession holders affect the profit-sharing model with the local communities?

The social angle is the fundamental layer of the project. If we don’t work with the communities in a constructive way for the long term, the project won’t succeed. But for sure, the profit-sharing model would look different because concession holders will want to get a piece of the cake, but we haven’t worked out the compensation mechanism yet.

How selective will you be about the sort of timber companies you’re prepared to work with?

Some concession holders are more positive than others and acknowledge the changes in the legislation, and see a business opportunity [in social forestry] — those are the companies we’ll be targeting.

We’ve been trying to get smarter at shortlisting viable project areas. We look at satellite images and public data to gauge the distance to offtake markets, soil fertility, area of degraded land, and so on. That gives us a short list of areas that best fit our model.

Once we’ve done that, we check in with the concession holders to see which have a similar way of thinking to us.

Our target project area may sound ambitious, but in relative terms it is quite minor. So we can be selective with the members we want to work with.

It’s a conservative assumption made in our model — 20 per cent is on the low side, and it could be much more than that in the future. But we don’t want our project to be dependent on carbon.

There are currently legislative uncertainties around the voluntary carbon market in Indonesia [international carbon credit trades are currently on hold], and we think we can really make a difference with timber and cash crops.

Problems often arise over land rights in Indonesia. How do you ensure that the land you’re using is secure from competing interests?

Our financial model is quite conservative. We do make an assumption that some illegal logging may occur on the land. We need to be realistic. But we believe that if the local communities are actively involved in our programme, they will also protect the forests — because their source of income depends on it.

How will you protect the forests in your project area?

Our carbon products are currently related to degraded land only, so we are now developing a strategy for conserving forests. This will involve recruiting local community members to guard the forest and gather data to validate carbon claims.

What sort of measurements will you be taking to ensure you are selling high-quality carbon credits?

Our sister company, Fairventures Digital, is developing a smartphone app that can, for example, measure the diameter at breast height (DBH), the standard for measuring trees, which can be translated into assumptions for carbon value.

To meet our targets, we need to work with concession holders to achieve scale. We can’t work on 20, 30 or 40 social forestry permits at the same time — that’s mission impossible. We also need to remain extremely disciplined in the execution of the project. That’s so important — from a legal and financial perspective. And we need to hire the right people locally.

How important is it that you hire locally?

That is a key point. Bringing in expats into Indonesia is tricky. It’s also an old-fashioned approach. We strongly believe in hiring locally. Ideally, in five to 10 years from now our German team will step back and the business will run itself. Then we can roll out our model to other tropical countries, where there’s a good climate for growth, legal certainty and structural flexibility.

Who made the cut for The Liveability Challenge 2022?