Activists and locals near the Verde Island Passage, a marine biodiversity-rich region in Batangas, protest against San Miguel Corp and Linseed’s gas facilities, which they say will be detrimental to the area and the surrounding community.

Environmentalists and residents campaigning to protect a marine life-rich body of water in the Philippines on Tuesday condemned the proposed construction of two gas facilities by local energy giants fearing that they will harm their ecosystem and the local communities dependent on it.

Excellent Energy Resources Inc., a unit of SMC Global Power Holdings Inc., is planning to build a 1,700-megawatt (MW) combined cycle power plant in Barangay Dela Paz and Ilijan in Batangas City with investments of about US$1.4 billion. It is set to come online by 2023.

Linseed Field Power Corporation, a subsidiary of Singapore-headquartered Atlantic, Gulf and Pacific Company  (AG&P), wants to develop a 1,200MW LNG import terminal and a planned 850MW expansion in Barangay Ilijan, Batangas City, amounting to US$304 million. It is estimated to be completed by June next year.

Pursuing these fossil gas projects is planting illness at the very heart of a global epicentre for marine biodiversity in the world.

The Verde Island Passage spans 36 marine protected areas (MPAs), and is regarded as one of the most biodiverse coral and fish species in the world, with more than 300 species of corals, underwater reef formations, and rock canyons that host around 60 per cent of the world’s shorefish species. The 1.4 million hectare passage stretches from Batangas to the shores of Mindoro, Romblon, and Marinduque in the southern part of the Luzon island group.

Natural gas, which currently accounts for over 21 per cent  of the Philippines’s power generation, is considered a cleaner-burning fuel because it releases up to 60 per cent less carbon dioxide than coal. But experts have flagged methane—a powerful greenhouse gas—that is emitted during its production, transportation and combustion.

A landmark report by the United Nations Intergovernmental Panel on Climate Change (IPCC) in August warns that “strong, rapid and sustained reductions” in methane emissions will be critical to avert dangerous heating, with methane behind an estimated 30 per cent of the global temperature rise of 1.2 degrees Celsius since the pre-industrial era. A forthcoming IPCC report, leaked in August, says that both coal and gas-fired power plants must close in the next decade to avoid climate breakdown.

“Pursuing these fossil gas projects is planting illness at the very heart of a global epicentre for marine biodiversity in the world. Life in the Verde Island Passage must continue thriving to sustain the millions of Filipinos who rely on it for food and to make a living,” said Fr Edwin Gariguez, lead convenor of Protect VIP.

There are tens of thousands of residents who are small-scale fishers and eco-tourism workers on the coast of Batangas, which bring in several millions of pesos of revenue for the province, read both letters signed by Gariguez and Bishop Colin Bagaforo, national director of the Social Action Justice and Peace  under Caritas, the humanitarian, development and advocacy arm of the Catholic Church in the Philippines.

These sectors are the most vulnerable to the disposal of liquid waste and bilge water from ships and oil spills associated with the construction and operation stages, the letters stated. 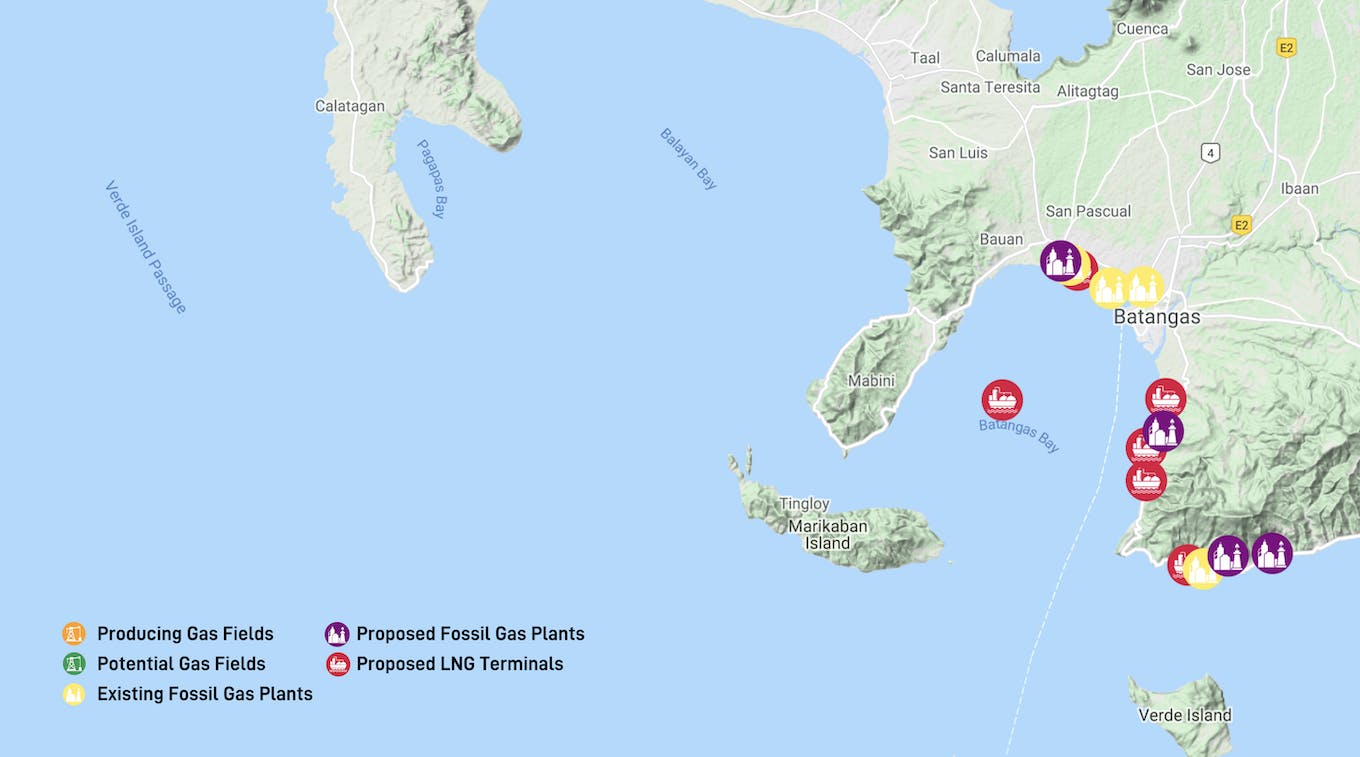 The Verde Island Passage stretches from Batangas to the shores of Mindoro, Romblon, and Marinduque in the southern part of the Luzon island group. Batangas has become a hub for fossil gas with nine out of 13 existing and proposed gas-fired power plants found in the province as of December 2020. Image: CEED

The Research institution Centre for Energy, Ecology, and Development (CEED) supported the protest by releasing an analysis of EERI’s environmental impact study which they said provides a clear picture of environmental threats, including unavoidable impacts such as coral bleaching and the negative physiological effects to reef fish but was lacking in other key areas.

CEED’s analysis found that EERI made no mention of the critical impacts to marine ecology such as surface water contamination from leakages of chemical additives or wastewater, aquatic contamination and climate impacts due to methane emissions from natural gas.

EERI’s study did show, however, that the construction phase of the gas facilty would cause physical damage to the fringing reef in the foreshore area which could result in the loss of coral cover. The disposal of waste may lead to accidental spills of contaminants, affecting groundwater quality.

CEED also said in its analysis that Linseed’s environmental impact study found that marine biodiversity in the Verde Island Passage will be directly affected throughout the implementation of the entire project, but the company’s report gave little importance to the area’s vibrant ecosystem.

Linseed’s assessment failed to include that the floating facility’s sediment plumes, which are suspended loads of sediment that persist for long periods and travel laterally, could cause devastating effects to the soft coral colonies in the area, while large organisms living on or in the bottom of of the water could suffocate from the structure, CEED found.

Plans by the Philippines to develop new gas fields have been beleaguered by disputes over territorial rights in the South China Sea. Coupled with the imminent depletion of the Philippines’ gas reserves, namely Malampaya which is expected to run out by 2027, investment in LNG projects have ramped up in a bid to stave-off risks of power shortages.

SMC Global Power Holdings Corp, which has defended its planned fossil gas projects, saying it was still “the best and safest option today.”

“Natural gas will balance the need to provide affordable and stable supply of electricity and move towards a 100 per cent green energy future. This will also bridge the gap until renewables are more widely available in the Philippines,” San Miguel spokesperson Mary Jane Llanes told Eco-Business.

Llanes said while the firm supports a full renewable future, the country still needs an optimal mix of traditional and renewable sources of energy.

Apart from the Batangas facility, San Miguel’s energy arm said in August that it will convert a proposed 300MW coal plant in San Carlos, Negros Occidental to an LNG-powered facility, as the island continues to suffer from power outages.

Llanes said Negros is mostly reliant on solar power, whose variable nature causes a significant drop in its power generation even with mild cloud formation and heat fluctuation.

Small-scale gas facilities are also being eyed in Visayas and Mindanao, which the firm says will facilitate the integration of intermittent renewable sources to the grid, improve power quality and help bring down the cost of electricity nationwide.

Apart from writing to San Miguel and Linseed, Protect VIP also issued letters to domestic and international banks like United Kingdom-based Standard Chartered, DBS Bank from Singapore, Japan Bank for International Cooperation and Mizuho as well as Chinabank and DBP from the Philippines, to halt their support for the two projects.

By cutting their financial services, the campaigners are hopeful that the gas projects will be cancelled: “The biggest financial institutions in the world are not only exiting from coal but also restricting lending for other fossil fuels and aligning their portfolios with the reduction goals of the Paris Agreement. Clearly, many are starting to see that fossil gas projects are terrible investments.”