Sarawak is most severely affected by shoreline erosion, and in some instances, entire beachfronts have been 'swallowed' by stronger waves, but its stories and losses have not been well-documented in Malaysia.

Eighty per cent – that is how much income tour operator and trader Adam Pitt lost when the iconic “horsehead drinking water” rock formation on Tusan Beach in Miri, a coastal city in northeastern Sarawak, collapsed in 2020.

“Before the collapse, I already knew that the beach was eroding. Ongoing erosion had affected all the different areas. Previously there were steps leading from the food stalls down to the beach. Now the stairs are gone,” he said.

Like many locals in the East Malaysian state of Sarawak, Pitt’s livelihood has been badly affected by shoreline erosion. The 35-year-old told Eco-Business that when he first began operating a makeshift ice cream and coconut shake stall in Miri in 2016, business was booming and tourists were flocking to the monthly fairs frequently held at the beach stretch, but the erosion problem intensified in recent years, possibly and partly due to nearby excavation work for a road that was built too close for comfort.  Business quickly took a hit with the decreased footfall.

Some 30 to 50 kilometres northeast of Tusan Beach, the towns of Bakam and Lutong are also facing severe damage. A resort operator who declined to be named says erosion is “eating up the coast”. Local news reports show that in July this year, large waves at high tide in Lutong flooded a road adjacent to the beach, affecting more than 30 beachside stalls. 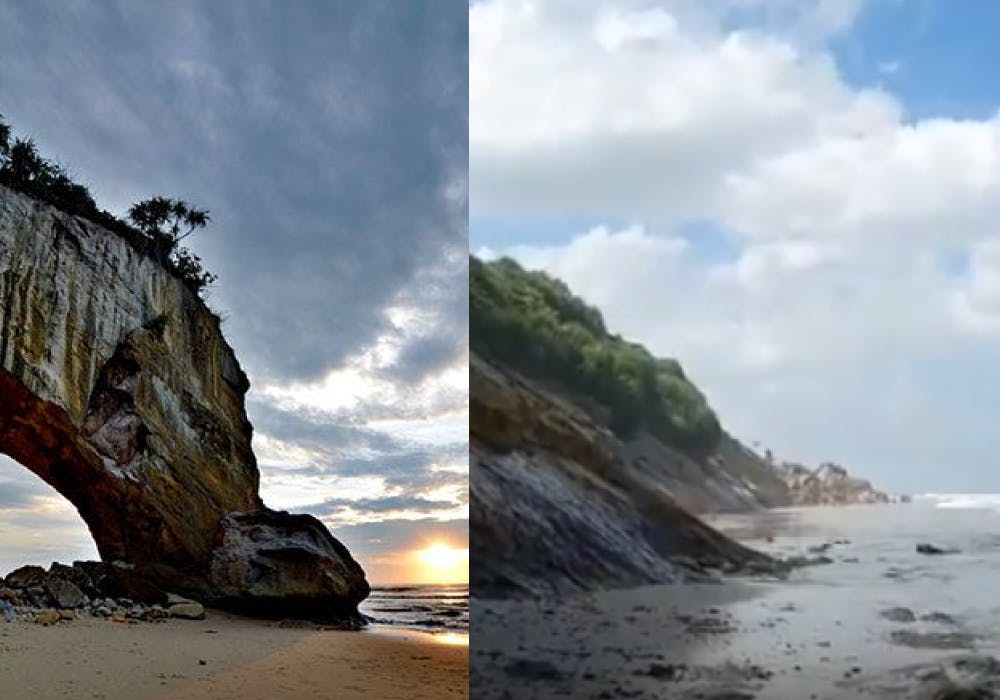 The “horsehead drinking water” rock formation, before and after its collapse on Tusan Beach, Miri in the East Malaysian state of Sarawak. Locals say a road leading down to the beach was being constructed too near the formation, worsening its erosion. Image: LokaLocal

Stories of houses and public infrastructure being swept away by eroding shorelines are not uncommon in Malaysia, with well-documented losses of beachfront resorts and roads along the coast of Penang and Terengganu, states in West Malaysia.

Under the 12th Malaysia Plan, Malaysia’s environment and water minister Datuk Seri Tuan Ibrahim Tuan Man also recently gave the green light for the implementation of 12 projects, at a cost of RM2.13 billion (US$470 million), to mitigate floods and curb coastal erosion, with most of them targeted at addressing the problem of sedimentation in the Pahang river estuary.

Sarawak, however, is the most severely affected state in the country, with 18.6 kilometres of seriously or critically eroding shorelines in Malaysia, according to Malaysia’s 2015 National Coastal Erosion Study. It is followed by Terengganu with 12.3 kilometres of critically eroding shorelines. The most severely affected areas in Sarawak include Kuching, Miri and Betong, data showed.

“In Malaysia, we have about 8,400 kilometres of shoreline and around 1,347 kilometres of those are facing erosion,” said Dato’ Ir. Nor Hisham Mohd Ghazali, director general of the National Water Institute of Malaysia (NAHRIM). According to the 2015 coastal erosion study, in which NAHRIM was involved, eroding shorelines are classified into three categories based on both the physical rate of erosion as well as the economic significance of the coastline at risk. Malaysia has 55.4 kilometres of shoreline in the most critical category.

What is coastal erosion?

Coastal erosion is the net loss of land from coastlines. It is caused by the removal of sand, rock and sediment from the coastline due to tides and waves.

Even stable beach experiences a natural process of erosion and accretion as sand is deposited and carried away by currents. But if something interrupts the supply of sand to the shore, such as a structure that extends towards the sea further along the coastline, this can result in a net depletion of sand to the beach, worsening erosion.

Adding to concerns are rising sea levels driven by climate change, which has led to Malaysia’s eastern coasts experiencing more severe effects from typhoons passing through the South China Sea.

“In the past, typhoons hardly had any effect (on Malaysia). But with climate change, we are seeing the storm frequencies go up,” Hisham told Eco-Business.

When a storm coincides with high tides, the results could be disastrous for coastal communities. Currently, local bunds or levees on the west coast of Malaysia are protecting the more densely populated coastal areas of Selangor and Perak, said Hisham.

“We are seeing more storms and more cases of our bunds being overtopped. What the country has to do in the long run is raise the level of these coastal embankments to prevent overtopping by these waves.”

“We have coastal protection structures that are functioning well now, but over time, this will be inadequate to withstand the higher waves,” Hisham said, adding that NAHRIM is studying the impacts of climate change and sea level rises, including its effects on jetties, ports, coastal protection infrastructure and more. As the institute’s forecasts closely match global figures, Hisham said they are confident that they are on the right track.

“We have coastal protection structures that are functioning well now, but over time, these will be inadequate to withstand the higher waves.”

Although it was published seven years ago, Hisham said that the 2015 data is largely still valid, with more critical areas having been protected since its publication.

“There is no hard and fast rule for reviewing shoreline erosion. I would recommend a full study documenting the situation for the whole country be done every 20 to 25 years,” he said, adding that the first national coastal erosion study was done in 1985, resulting in a 30-year interval before the second study was completed. “Integrated shoreline management plans were done in the interim to update the shoreline conditions only in some states.”

Data from the 2015 National Coastal Erosion Study was used as a baseline for Malaysia’s Second National Coastal Zone Physical Plan, published in October 2021. However, the plan does not include stategies for the East Malaysian states of Sabah and Sarawak, since these two states “have not adopted the Town and Country Planning Act 1976 and have their respective State Structure Plans to guide the physical development of the states”, according to the Federal Department of Town and Country Planning’s website.

“Sabah and Sarawak are considered in all national studies although they are administratively autonomous,” said Hisham.

No permanent solution in the face of climate change

Another location that the 2015 National Coastal Erosion Study identified as being prone to critical erosion is Santubong, an area near Sarawak’s capital city of Kuching popular for its beaches and the Sarawak Cultural Village. Hazel Rimbar, 36, who lives a short walk away from Damai Beach says that the beach is not the same as it was in previous decades.

“I frequented Damai as a child and comparing then and now, the beaches have definitely changed,” Rimbar told Eco-Business. “(The beaches) are less sandy than before and the sand is more coarse or stony.”

“I honestly feel that it has shrunk and the quality of the sand is different,” she said, adding that some locals believe that the beaches in Santubong might have been “topped up” with sand brought in from elsewhere. Emails from Eco-Business to local authorities to confirm this were unanswered.

Adding more sand to beaches is among the “soft measures” that the government employs to protect Malaysia’s shorelines from coastal erosion, Hisham said.

“We call them soft measures because they are not permanent solutions. The sand will continue to move around and in certain ways, the beach will undergo erosion,” he explained.

In 2002, for instance, the coastal town of Port Dickson experienced severe erosion, following which about 500,000 cubic metres of sand were brought in and placed in front of the eroding shoreline, Hisham said.

According to Hisham, the Malaysian government starts to look at implementing strategies to prevent shoreline erosion from worsening when the problem affects livelihoods and infrastructure. “They look at whether there is something worth protecting in the area,” said Hisham. Otherwise the problem might be left on its own. 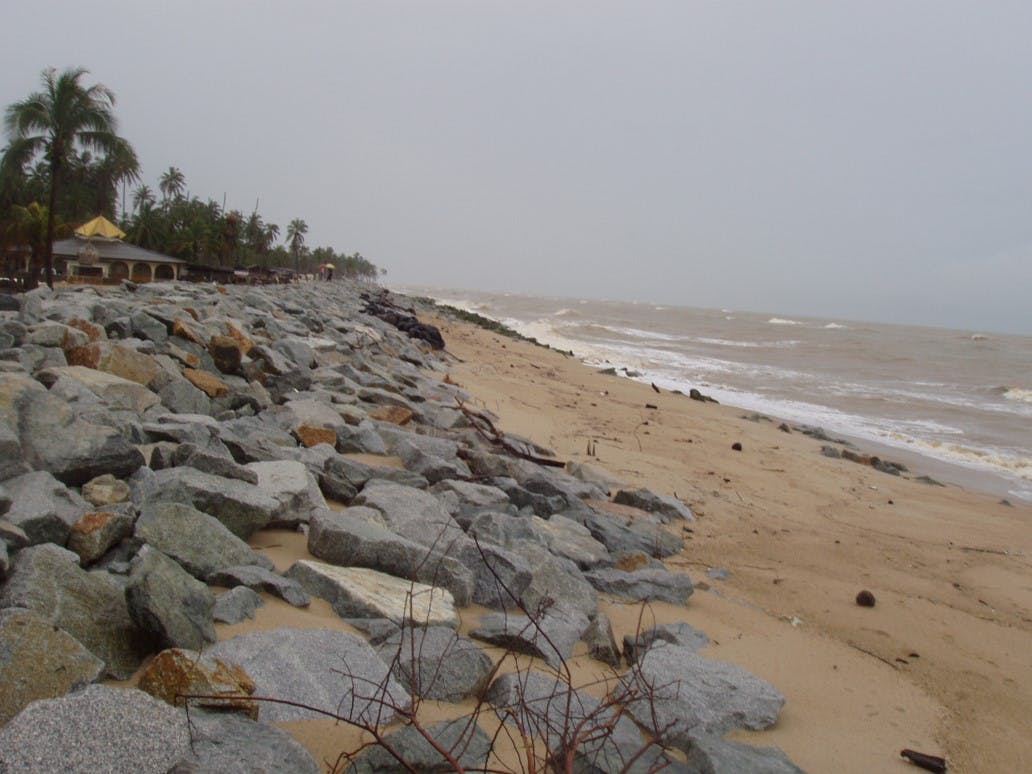 Revetments are constructed along shorelines to protect them from coastal erosion. Image: National Water Institute of Malaysia

Where necessary or appropriate, “hard” protection measures are implemented, such as by building sea walls or revetments, usually a layer of rock or concrete units used to protect the shore. At Lutong, gabions, or walls created by filling large metal cages or baskets with gravel or rocks, were installed in 2021 as a temporary measure to prevent further erosion of the beach, while a long-term solution would involve building a rock revetment, authorities said.

Mangrove planting has also been touted as a bulwark against coastal erosion, but the task is not straightforward as mangroves only thrive under specific conditions, Hisham said. Research indicates that mangroves themselves face negative impacts from rising global temperatures and sea levels.

“Mangrove replanting…depends on the wave climate of the area, whether the sediments have enough time to consolidate and be strong enough for the plants to take root; and the mortality rate of seedlings is very high,” Hisham said, adding that sometimes, not even 10 per cent of planted seedlings survive.

“If nature decides that this is a place where (mangroves) can grow, they will grow,” he said. In the meantime, human intervention is still necessary in the form of temporary barriers built to protect young seedlings and provide a calm environment for mangroves to take root.