While climate change may bring some benefits to mangrove forests, the net effect will be strongly negative, researchers say. Mangroves are particularly vulnerable to stressors like sea level rise and cyclonic activity.

Coastal mangrove forests are some of the world’s most important carbon sinks, but the specifics of how they will be impacted by climate change have been fairly uncertain up to this point. A new study provides more insight as to how mangroves will respond to global warming.

The net impact of climate change on mangroves will be strongly negative in a world with 2°C warming, wrote the four co-authors of the study, published this month in a scientific journal. Sea-level rise and tropical cyclones were identified as some of the key climate stressors affecting the long-term survivability of mangroves.

The findings of the study are particularly concerning given that 42 per cent of mangrove forests in the world can be found in Southeast Asia, according to the ASEAN Centre for Biodiversity (ACB). The region is also expected to face some of the worst impacts of climate change.

“Southeast Asia’s mangroves are crucial because we have large coastal populations — millions of people — that rely on mangroves,” said Dan Friess, lead author of the study and head of The Mangrove Lab at the National University of Singapore.

Mangroves provide a nursery for local and commercial fisheries, fuel and construction materials, and traditional medicinal products, he added.

However, Southeast Asia also sees the highest rates of mangrove loss globally, often due to direct human threats like agricultural expansion in countries like Myanmar and Indonesia. More recently, extreme climate events have become the largest cause of mangrove loss in some regions.

According to Friess, it has been hard to disentangle the often subtle and gradual impacts of climate change from some of the more immediate threats to mangroves. The study therefore synthesises existing research to isolate climate change impacts. The findings can be used to improve mangrove management based on the projected impacts.

Mangroves tend to be located in intertidal zones, which are areas above water level at low tide and submerged at high tide. This puts them on the front lines of climate impacts such as sea-level rise and tropical cyclones.

While mangroves forests have largely been able to adapt to sea-level rise, a 2°C warming scenario would lead to much higher rise — as much as 87cm by 2100 — threatening to inundate entire ecosystems. With hard infrastructure along the coast such as homes and roads, mangroves may not be able to migrate inland to ‘escape’ rising waters. 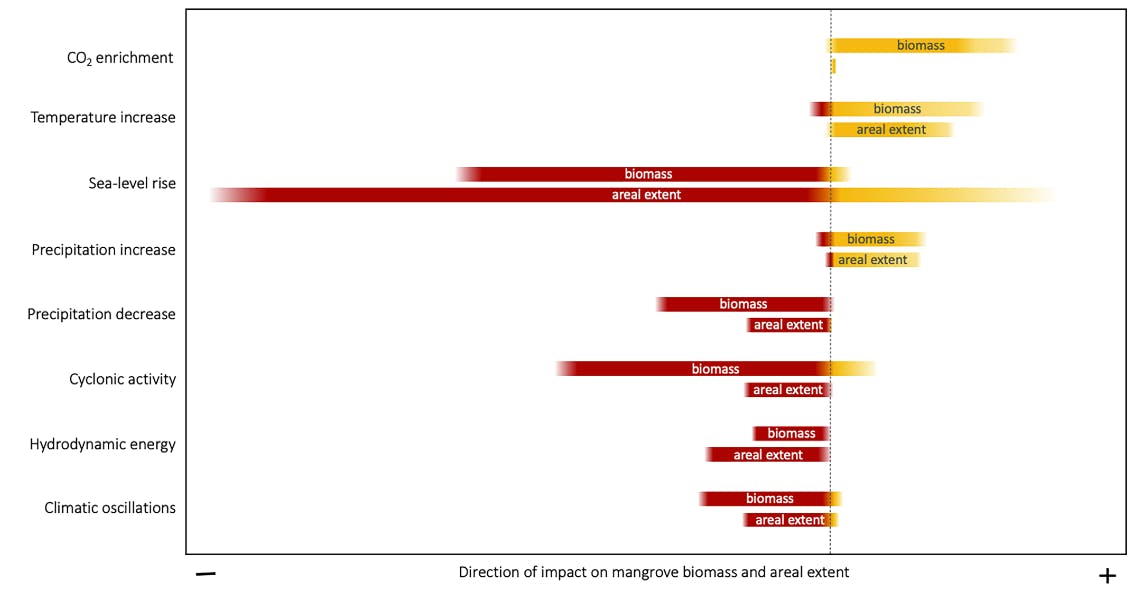 To ensure the long-term protection of mangroves, the study suggests identifying and prioritising the most resilient mangrove ecosystems for conservation, some of which can be found in Singapore.

Restoration — returning a habitat to the most natural condition — is also highlighted as a key strategy. Projects should be designed “with a range of climate change impacts in mind”, said the study. For example, more tolerant mangrove species can be selected for cyclone-prone areas.

Mangroves may also expand towards the poles where temperatures tend to be cooler, therefore escaping the worse effects of global warming.

However, these are contingent on the specific geographical location, physical settings, and mangrove species in each ecoystem.

“It is important to communicate that the exact impacts can be nuanced,” the study said. “The potential impacts of climate change on mangroves will be both positive and negative.”

The researchers hope that the study raises the profile of mangroves within climate change policy discussions.

“We also hope that it shows a path forward in how we can manage these dynamic ecosystems in a changing climate,” Friess said.