The Global Footprint Network has declared August 19 as 'Earth Overshoot Day' - the point in 2014 where humanity has consumed more resources than the planet can regenerate in a year.

While there is still a quarter of the year left to go, the world has already spent nature’s budget for 2014, international sustainability think tank Global Footprint Network (GFN) declared on Tuesday.

The group said in a statement that August 19 marks ‘Earth Overshoot Day’, the point in the year when humanity’s annual ecological footprint – that is, the total area that is needed to meet humanity’s demand for resources and absorb its waste – has exceeded the planet’s biocapacity, or ability to supply these resources and waste processing functions.

Furthermore, only 14 per cent of the world lives in countries whose ecological footprint was less than what the national ecosystem could renew within the year; the remaining 86 per cent lived in ecological debt, said GFN.

Earth Overshoot Day is an annual effort launched in 2006 by the GFN to calculate how long the earth’s annual biocapacity can sustain human life. The proportion of human demand to planetary supply is calculated by dividing the earth’s biocapacity by its ecological footprint, using figures obtained from the United Nations and other scientific literature.

This percentage is then multiplied by the number of days in a year to arrive at an estimated date for Earth Overshoot Day.

Mathis Wackernagel, president of GFN, said: “Global overshoot is becoming a defining challenge of the twenty first century. It is both an ecological and economic problem.”

GFN said that the problem of ‘ecological overshoot’ began in the 1970s and was fuelled by global and economic growth. Prior to that, it said that “humanity used just about three-quarters of the capacity Earth had available for generating food, fibre, fish stock and absorbing greenhouse gases.”

It went on to cite climate change, food and water scarcity, deforestation, and soil erosion as examples of ‘interest’ that humanity was paying on this mounting ecological debt.

Founded in 2003, the Global Footprint Network is headquartered in Oakland, California, with offices in Geneva and Brussels. With a team of almost 40 staff, their work focuses on the concept of the Ecological Footprint and encouraging rigorous monitoring and accounting to ensure that the planet is operating within its ecological budget.

This milestone is likely to be reached even more quickly in coming years, according to GFN’s population, energy and food projections. These suggested that humanity currently required 1.5 planets to meet present day resource needs, but that three planets worth of resources would be required to support humanity by 2050. GFN said this was a figure that “may be physically unfeasible.”

GFN added that vulnerability to the resource scarcity resulting from ecological debt was enhanced by low incomes, and that 2 billion people in ecological debtor countries such as China, Philippines and South Africa still did not have access to basic needs such as water, food and sanitation. 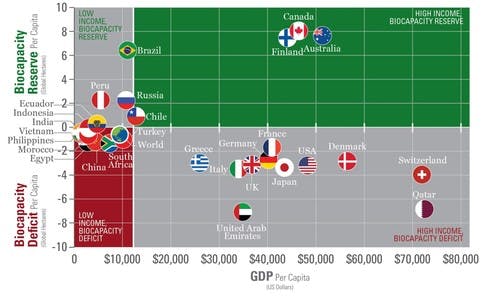 Ecological footprints of countries versus GDP per capita. UAE and Qatar have the highest ecological deficit, while Brazil, Canada, Finland and Australia have the highest biocapacity reserves. Image: Global Footprint Network.

Amongst the ecological debtor countries, the United Arab Emirates (UAE) had one of the largest footprints; it would take an astonishing 12 UAEs to support the country if all required resources had to be produced within the country’s borders.

China, the world’s largest economy, would require 2.2 times its land area to support its populace, while it would take seven Japans to meet the nation’s resource demand. 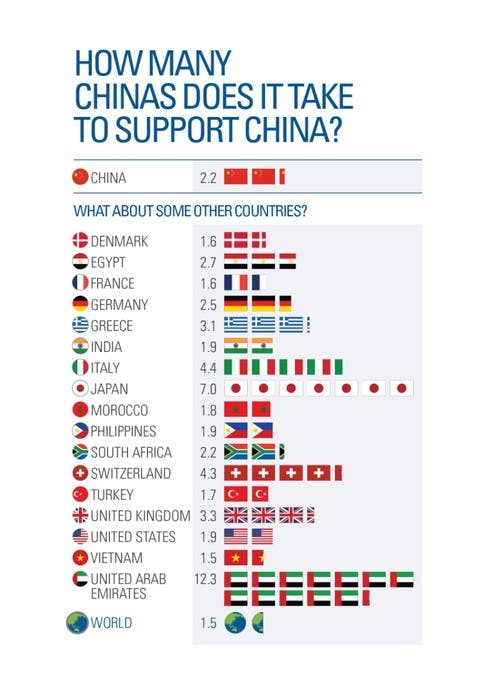 Global overshoot is becoming a defining challenge of the twenty first century. It is both an ecological and economic problem.

They noted: “Countries running biocapacity deficits find that reducing their resource dependence is aligned with their self-interest. Conversely, countries that are endowed with biocapacity reserves have an incentive to preserve these ecological assets.”

Wackernagel added while there were benefits to be reaped from resource conservation, the consequences of failing to do so were dire, especially for countries which had resource deficits and low incomes.

However, even rich countries who could “shield themselves from the most direct impacts of resource dependence need to realise that a long-term solution requires addressing such dependencies before they turn into a significant economic stress,” said Wackernagel.

Some countries have already begun to take action to reduce their ecological deficit. For example, the UAE, whose ecological footprint and GDP per capita are both among the world’s highest, is implementing legislation which will only allow the sale of energy efficient indoor lighting products in its territory by year end, a move that aims to tackle the country’s staggering carbon emissions.

Meanwhile, the Philippines, who became the first country in Southeast Asia to adopt the ecological footprint concept at the national level in 2012, is working to integrate the concept into its national policy. For example, the Philippines government worked with the French Agency for Development to complete a study to account for the ecological capacity of Laguna Lake Basin, the country’s largest inland body of water last year. This knowledge of resource limits will then be used to guide decision making on land use change and economic development.

GFN welcomed these efforts to shrink national ecological footprints, adding that “regardless of a country’s specific circumstances, incorporating ecological risk into economic planning and development strategy is not just about foresight – it has become an urgent necessity.”