The neighbourhood rag-and-bone man, known as karung guni, collects more waste than the blue recycling bins dotted around Singapore. Are they the secret weapon to dealing with the city-state’s huge waste problem?

For Singaporeans who have grown up in the country’s public housing estates, the rag-and-bone men who come around to collect unwanted household items are a familiar sight.

Known as the karung guni, they collect almost nine times more recyclables than national recycling efforts, it was revealed at this year’s Eco Action Day, where industry leaders and government representatives discussed how these informal waste collectors could drive the future of recycling.

As Singapore seeks to reduce its waste and promote a circular economy in the Year Towards Zero Waste, karung guni men have a role to play in closing the waste loop, said Tan Meng Dui, chief executive of the National Environment Agency (NEA), at the 13th annual Eco Action Day Roundtable, hosted by imaging and electronics company Ricoh and co-organised by Eco-Business.

During a panel discussion that capped off the event, Tan revealed that a whopping 90 per cent of domestic recyclables are collected by karung guni and carnival collection drives, while blue recycling bins account for the other 10 per cent.

“I think there’s scope for us to try to improve this sector. If they are doing good work you want to organise them better. Start-ups could have a role here to connect consumers and collectors,” he added.

An NEA spokesperson elaborated: “We are open to new initiatives, especially privately funded ones, that can better leverage on technology, as well as optimise the flexibility and business networks of the informal recycling sector.”

As the early pioneers of recycling culture in Singapore, karung guni men typically go door-to-door to collect newspapers, electronics and other unwanted items once a week. Unlike the commingled recycling bins in residential estates, karung guni are already familiar with what types of trash can be recycled and the need to prevent cross-contamination of waste.

Another panellist, Mohit Grover, executive director of Deloitte Singapore, acknowledged the benefits of informal collection and highlighted the need to revitalise this sunset industry. “We need to plan how to integrate the know-how, passion and experience on the ground into something that’s more modern,” he said. 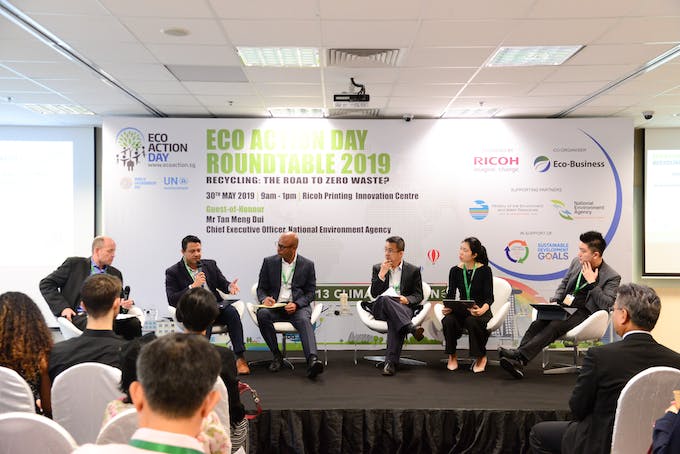 Representing the non-profit perspective, Pek Hai Lin, manager of non-government organisation Zero Waste Singapore, welcomed ideas to advance the karung guni concept but said the first step should be to consolidate and empower the sector.

“By formalising the sector, karung guni can be provided with better working conditions and a more stable income. Things like taking apart electronics can be hazardous to their health so proper training and a focus on welfare are essential if the private sector wants to engage them,” she elaborated.

Strategies like these divert solid waste from landfills, generate jobs and bolster circularity in the waste economy.

The role of the informal waste sector was just one of the many topics discussed by more than 60 government, senior business and academic leaders, who were asked to reimagine the future of recycling in Singapore, with a focus on Goal 13 of the United Nations Sustainable Development Goals (SDGs) — climate action.

Cultivating a culture of recycling

Another hot topic at the roundtable discussion was how to create a culture of recycling in Singapore.

Panellists suggested that plugging knowledge gaps was key to achieving this. Anirban Mukherjee, director global packaging of Asia Pacific, Johnson & Johnson Consumer, said producers ought to be aware of the recyclability of their materials. He brought up the example of PETG plastics, which are used to manufacture containers for food and beverages, but act as a contaminant during the recycling process.

“Choosing the right materials for construction is uniquely in the control of manufacturers and that’s where [companies like ours] can have a big impact,” he said.

For instance, Ricoh operates a global refurbishment service, where its old copiers and printers are collected and restored for reuse or resale rather than being thrown away. This is an example of how companies can “enhance the circular economy process to reduce the environmental impacts of a product’s lifecycle”, said Kasamoto.

NEA’s Tan added that the Extended Producer Responsibility (EPR) law—to be introduced for electronic waste by 2021 and packaging waste by 2025—will force companies to be responsible for the collection, treatment and disposal of their products after they have been used.

On the consumer front, speakers agreed that education was key. According to a 2018 report by the Singapore Environment Council, 70 per cent of people in Singapore do not fully understand what kind of plastics can be recycled.

In the same vein, Zero Waste Singapore’s Pek emphasised that the key is to build habits and actively practice environmentally conscious behaviour. Once more people actively participate in recycling right then “social accountability through peer pressure can come in”, she added.

Singapore’s domestic recycling rate currently stands at a dismal 22 per cent as of 2018. However, Jessica Cheam, founder and managing editor at Eco-Business, reminded attendees to see the silver lining.

“I see this as a huge opportunity for the first movers and the pioneers in this industry as we are not just here to tackle the existential threat of waste, but also to look for business opportunities. Imagine if Singapore could come up with all the technologies and solutions to recycle every stream of waste. This is something I hope we can take on in our conversations and in our work,” she said.

Eco Action Day Roundtable concluded Ricoh’s annual Eco Action Day campaign, held in conjunction with World Environment Day every 5 June. As an extension of the campaign, Ricoh will be organising a tree-planting event at Republic Polytechnic in July to kick start its inaugural seed distribution initiative to local communities in Singapore.