What will Singapore’s producer responsibility laws mean for business?

In the next few years, companies in Singapore will have to take responsibility for the packaging and electronic waste they produce. But what will this mean for businesses in a city that incinerates most of its waste and is low on recycling infrastructure?

By 2025, Singapore will have extended producer responsibility (EPR) laws in place for both packaging and electronic waste (e-waste), as the tropical city-state grapples with the reality that its only landfill site will be completely full within the lifespan of a cat.

EPR laws make the companies responsible for the collection, treatment and disposal of their products after they’ve been used, helping to reduce waste and create a market for discarded plastic, paper and metal that would otherwise be destined for landfill.

But what will EPR laws mean for businesses in Singapore, a country that incinerates most of its waste—2.8 million tonnes every year—and is low on recycling infrastructure?

Sumangali Krishnan, head of research and strategy for GA Circular, a consultancy devoted to finding business opportunities in post-consumer waste in Asia, says that for Singapore’s EPR laws to work, those designing them first need to work out where the value lies in waste, and how companies can extract that value.

If everyone consumed resources at the same rate as people who live in Singapore, we’d need four planets to sustain humanity. Singaporeans generate more than 19 times more e-waste than Vietnamese, Filipinos or Cambodians, throwing away the equivalent of 147 iPhones every 10 seconds. The country also produces more than three times more plastic waste per person than Indonesia, the world’s second largest plastic polluting country. Each resident uses an estimated 13 plastic bags every day.

As a resource-poor nation that imports most of its food, Singaporeans are big consumers of packaged goods. But at the moment, the value of packaging waste—which makes up a third of Singapore’s domestic waste stream—doesn’t go much further than the energy it generates in the country’s four waste-to-energy plants.

But companies have invested in making plastic, so why not put it to better use than burning it, suggests Krishnan. ”It’s more expensive to turn oil into plastic than to turn plastic into plastic,” she says, adding that there’s a big opportunity for businesses to tap into the 94 per cent of plastic waste that is not being reused or recycled.

After recyclable material has been collected and processed, companies could then feed that content back into their packaging, she says. But two important obstacles make this tricky. 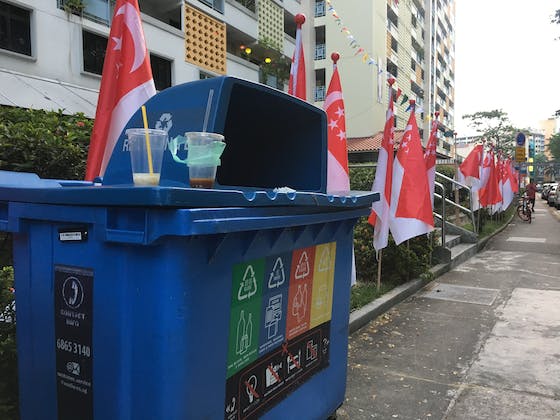 One is that Singaporeans are reluctant recyclers. Low recycling rates, food and liquid contamination in recycling bins, and the fact that residents are not obliged to separate items are preventing the creation of a market for post-consumer waste.

Contamination is a concern for producers. “As a consumer healthcare company, we take consumer safety very seriously and don’t want to introduce a risk of contamination in our products via contaminated recycled plastic,” says Anirban Mukherjee, Asia Pacific director of global packaging for Johnson & Johnson, a global healthcare company with regional headquarters in Singapore.

Mukherjee says that, compared to the United States and Europe, good quality post-consumer recycled plastic (PCR) is hard to source in Southeast Asia.

Another concern is that Singapore is short on recycling infrastructure, though according to Krishnan setting up facilities on a space-stressed island is less of an issue than finding someone to fund them.

If consumers start to demand sustainable packaging they will get it, and then this becomes the cost of doing business.

But producer responsibility is not just about recycling. Reduction is the first step in Singapore’s journey towards an EPR system for packaging, which begins with a mandate for companies to report the amount and type of packaging they use by 2021. That data will lay the foundation for an EPR system to come into play four years later.

This data will help authorities and industry work out where the responsibility lies and who should pay for what, such as the collection of waste packaging. It’s also an opportunity for businesses to think about where they can make a difference and influence the process, says Krishan.

Mukherjee acknowledges that EPR laws come with a cost. “In many cases there’s an immediate cost impact of producing sustainable packaging, but the overall impact of it can only be calculated when there’s critical mass in the circular industry. If consumers start to demand sustainable packaging they will get it, and then this becomes the cost of doing business,” he says.

E-waste was singled out by Masagos Zulkifli, Singapore’s Minister for the Environment and Water Resources, as a bigger problem than plastic last year, because of its high toxicity. And it is e-waste that will be the first waste stream to be tackled by an EPR law, to be introduced by 2021. 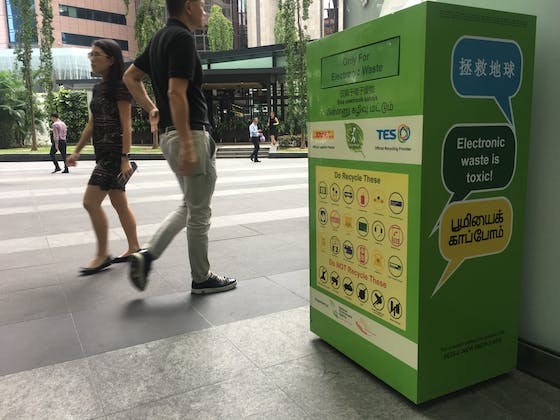 This is because managing used mobile phones, computers and printers is more straightforward, says Krishnan. There are already a number of e-waste collection points dotted around the city, including in electronics stores and in busy shopping areas, and e-waste is produced less frequently than packaging, so is easier to control.

Some companies already have a system in place to manage used electronics, such as Japanese printing and imaging firm Ricoh that works with its business customers to retrieve their e-waste and refurbish, remanufacturer, or recycle it.

The difficulty comes when EPR interferes with that process, says Adrian Lim, Singapore head of managing director’s offfice, for Ricoh Asia Pacific. The new system is to be officiated by a middle man who will report companies’ waste statistics.

“We already have someone who does that. Bringing in someone else does not add value, and there’s a question mark over how efficient the process will now be,” says Lim. For instance, an online portal managed by the National Environment Agency and used for companies to report their waste data, would be all that’s needed, he adds.

EPR will be harder for consumer electronics firms, particularly those selling through home furnishing stores such as Harvey Norman and Courts. How can they ensure that their products are collected, and contamination is avoided at collection points? “Collection centres are great. The question is, will Singaporeans bring their e-waste to the collection points?” says Lim.

That will require an important piece of the EPR puzzle to succeed where Singapore has long struggled on its waste management journey—communication. Lim says a massive public education campaign is needed of the scale and longevity of campaigns that have successfully fought dengue and conserved water in the tropical city-state.

“In Japan, Taiwan and Australia, people separate their trash and recycle. It’s bred into them from a young age and is part of the culture,” says Lim. “It’s not the norm in singapore. And it will take a while for us to get to that stage.”

As a company, Lim says Ricoh is committed to zero waste, and EPR supports that mission. “It would be great if one day we could collect every machine we sell, and create a truly circular economy,” he says.

The future of recycling in Singapore was discussed at the Eco Action Day Roundtable at the regional headquarters of Ricoh Asia Pacific on Thursday 30 May.