The lives of coastal dwellers and the ocean are intricately linked. New conservation initiatives build on this relationship, encouraging communities to take ownership of marine reserves and look after the resources that sustain them.

When Imanuel Mofu dove down to the reef fringing Boo Island in early March last year, he knew immediately that something was amiss. The 32-year-old patrolman and his fellow crewmembers had inspected the colourful corals many times before. Now, they lay in pieces, bombed by fishermen to kill fish for easy collection.

“I was very sad to see this. A large part of the reef was gone,” recalls Mofu. Only one month before, another crew had been arrested for dropping explosives on a reef nearby that is also part of the Kofiau-Boo Islands Marine Protected Area (MPA), which is located in Raja Ampat, an archipelago in the province of West Papua in Indonesia’s far east.

It is rare that perpetrators get caught, Mofu says. Monitoring the park, which covers ​​148,979 hectares, an area about twice the size of Singapore, and contains a staggering 44 small islands, is no easy feat. Mofu heads out on patrols up to 10 times a month, yet no one can be everywhere at once, and the reserve lacks the resources to send out staff around the clock.

Most of the time, only traces of illegal fishing practices are found. That can be corals blasted to shreds. It can be unexploded, homemade fish bombs, sunk to the ocean floor. Sometimes, it is dead sharks, thrown back into sea after their fins are cut. Every violation is meticulously documented by patrolmen to eventually get ahead of the offenders, increasingly through mobile applications.

Mofu hails from Arborek, an indigenous village that is part of an Indonesian government programme to boost tourism in the area. With about a quarter of the ocean’s fish dependant on healthy corals, his community relies on the reefs, not just for food but also because they attract visitors. And so, several years ago, he decided to join the patrol teams that scout the park to help keep it safe.

Commitment from communities and the local government has been a key ingredient to West Papua’s success in safeguarding its rich marine ecosystems, says Syafri Tuharea, a local manager for Indonesia’s MPA management authority (UTPD) in West Papua.

When a consortium of nature groups including Conservation International, the Nature Conservancy and the World Wide Fund for Nature discovered the area’s incredible biodiversity in 2003, authorities promptly invited all customary leaders and other stakeholders to Tomolol village in the south of Raja Ampat to officially declare that the region needed protection, and that no more destructive fishing would be carried out. In 2006, the first two MPAs were introduced. Four more were added two years later. Today, more than a dozen parks are scattered across the region.

More and more, villagers are recognised as critical stakeholders in conservation planning and management, says Tuharea. Since its founding in 2014, UTPD has evolved into a collaborative institution to allow authorities and communities to look after marine parks and govern financial resources together, marking a major shift away from past top-down approaches that saw officials in faraway skyscrapers draw up new MPAs without any consideration for local communities’ customs and concerns.

It is a trend that has emerged across the Asia Pacific, says Hans Wendt, a Fiji-based marine programme coordinator at the International Union for Conservation of Nature (IUCN), an international organisation that gathers data on the status of the natural world and advocates for its protection. Involving communities in marine conservation, he explains, strengthens compliance and ensures that MPAs respect and build on existing indigenous traditions that villagers have upheld for generations to safeguard their resources. Among coastal dwellers in West Papua, for instance, it is common to only permit three species—trochus, lobster, and sea cucumber—to be caught and close certain areas for longer periods to allow them to recover.

“Many coastal communities have long had local systems for marine protection in place, and top-down processes can create a lot of confusion if they disregard these traditions,” Wendt tells Eco-Business. “It’s far more effective to bring communities on board to give them a sense of ownership and raise awareness of the benefits of MPAs through education and outreach efforts.” 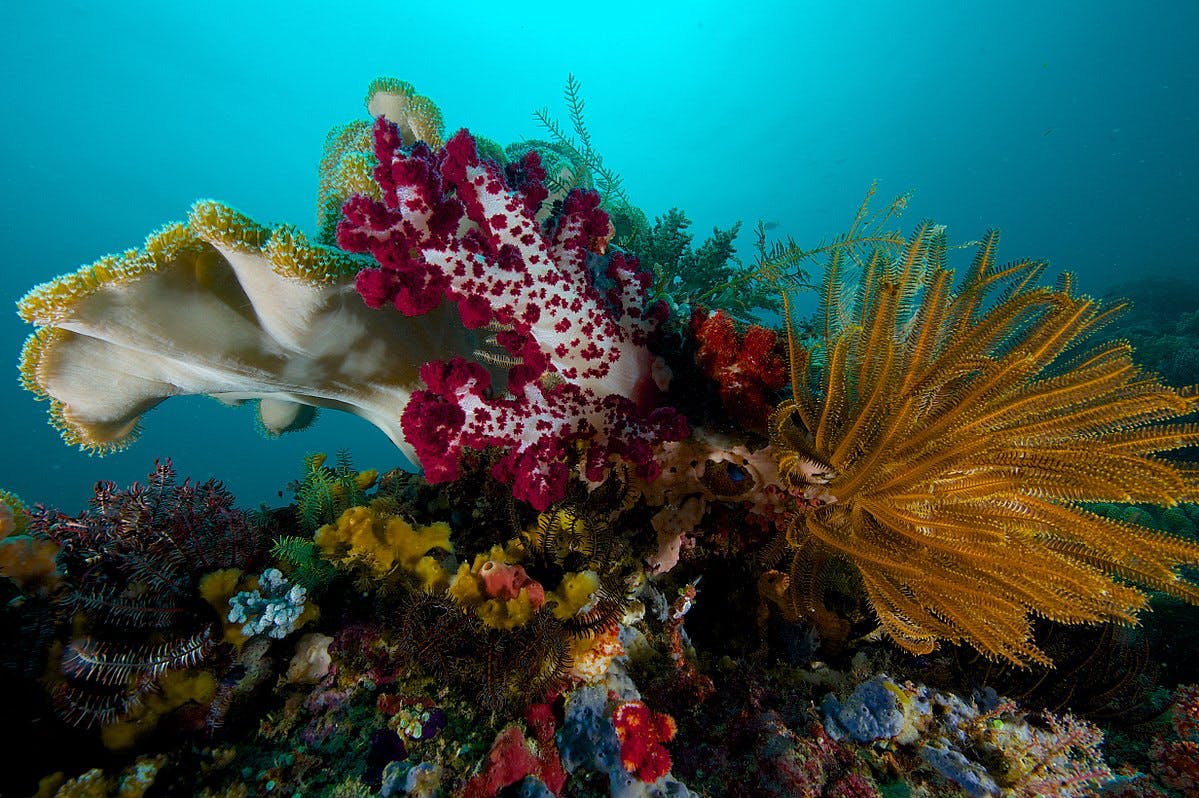 A coral reef in Raja Ampat. The archipelago is the world’s most important coral diversity hotspot with 553 species recorded. Image: Buena Ventura, CC BY 3.0 via Wikipedia Commons

West Papua is part of the Coral Triangle, an area that encompasses almost 4 million square miles of ocean and coastal waters in Southeast Asia and the Pacific, and is considered the global epicentre of marine biodiversity. The Triangle hosts 76 per cent of the world’s coral species and the highest diversity of reef fish globally, with 6,000 different fish species documented. Its biological resources directly sustain the lives of more than 120 million people that call it their home, and benefit millions more worldwide.

This means that the region’s protection has global implications, says William Cheung, professor at the Institute for the Oceans and Fisheries of the University British Columbia in Canada. In a recent study published in the scientific journal Nature, he and a team of researchers showed that placing key marine ecosystems in the Asia Pacific and other highly biodiverse areas under protection could safeguard 80 per cent of the habitats of endangered marine species while boosting food security.

In recent decades, governments have increasingly recognised the need to establish marine reserves. Across the Coral Triangle, almost 1,300 MPAs have been set up, spanning an area of 207,339 square kilometres, nearly 300 times the size of Singapore. With 188 MPAs covering 187,221 km2 of ocean, Indonesia is leading the charge in Southeast Asia, followed by the Philippines, Papua New Guinea, and Malaysia. In 2004, the country decided to set aside 20 million ha of coastal areas for MPAs by 2020, a target it recently updated to 30 million ha by 2030 to do its part in achieving the United Nations’ ambition to protect 30 per cent of the planet’s land and ocean by 2030.

Communities in Raja Ampat like to call the archipelago a piece of heaven that fell from the sky. If we use our marine resources wisely, they will sustain communities for generations to come.

But it’s not just the number of MPAs that is growing—they’re also getting bigger. Indonesia has been opening more MPAs larger than 100,000 ha, but the Philippines and many other parts of the Asia Pacific are moving in the same direction. Pacific island nations such as Tonga, Fiji and the Solomon Islands have ambitions to set up MPAs in deeper waters that are several hundred ha in size, Wendt tells Eco-Business.

Countries across the region also increasingly aim to link several MPAs in networks to better protect sharks, tuna and other species that travel across vast expanses of water. Previously, they tended to create tiny marine reserves of one to 10 ha, which are too small to have a significant positive biological impact because most fish populations don’t stay within such small areas.

That said, there is a limit to how big MPAs can get before they become too unwieldy to manage. “The bigger the MPA, the more difficult is enforcement. Governments and communities have to think carefully about how to use the available budget efficiently,” says Wendt.

Conservation efforts don’t come cheap. To patrol a marine reserve, fuel needs to be sourced and crews need to be paid. Boats require regular maintenance. Tuharea says that UTPD, like many other Southeast Asian conservation bodies, receives most of its funding from tourists who pay a conservation fee to explore Raja Ampat’s iridescent underwater world.

This meant that when the Covid-19 crisis abruptly shut down tourism across Southeast Asia last year, it cut off a vital source of income for many MPAs and the patrolmen that guard them. UTPD’s revenues fell drastically, from IDR18 billion (US$1.2 million) in 2018 to IDR5 billion (US$350,000) in 2020. Emergency grants helped keep marine protection in West Papua afloat, but many other MPAs across the Asia Pacific didn’t have anything to fall back upon. Many fishermen quickly took advantage of the situation, leading to a spike in illegal fishing practices.

Covid-19 has put a lot of pressure on coastal ecosystems.

“Covid-19 has put a lot of pressure on coastal ecosystems,” says Wendt. “When people lose their jobs, there is always a risk they will exploit marine resources for food, or to make up for a decline in business revenue.”

The pandemic has driven home the fact that governments and conservation groups cannot rest on their laurels. Ever at risk of being undone by economic slowdowns or shifting political tides, marine conservation programmes need to build resilience for tough times. To do so, authorities could implement several layers of protection at different levels of government and involve civil society organisations to ensure environmental regulations and curbs on tourism cannot be easily rolled back, says Wendt.

Conservation projects could also leverage novel financing solutions. They could, for instance, generate blue carbon credits for the carbon that coastal ecosystems like mangroves, seagrasses and salt marshes sequester to monetise their protection efforts. The demand for carbon credits is expected to rise by a factor of 15 by 2030, making the market worth US$50 billion. MPAs could claim a piece of that pie. In addition, MPA managers could explore other modes of tourism, such as holiday homes, as a source of funding.

“Communities in Raja Ampat like to call the archipelago a piece of heaven that fell from the sky,” says Tuharea. “If we use our marine resources wisely, they will sustain communities for generations to come.”

This story was updated on 21 July. It has been updated with new comments in paragraphs 6, 9, 10, 14, 16, 19, and 21. Comments provided by Conservation International in the original content published on 23 June have since been removed.