When the ocean is protected, the impacts are felt by people on land. Since ocean conservation laws were enacted in both the Philippines and Timor Leste, the livelihoods of coastal communities have changed for the better.

In the province of Batangas in the Philippines, marine protected areas (MPAs) and seasonal fishery closures have been implemented since 2014 to combat indiscriminate and illegal fishing, which took a heavy toll on fish stocks.

While the coastal communities are now on board after witnessing the abundance of fish that came with these new rules, the road to implementation wasn’t easy in the early years.

“Many of the community members are fisherfolk, so naturally people objected to MPAs at first. They felt like their livelihoods and rights were taken away from them,” Augustus Montebon, marine programme director at Conservation International Philippines, told Eco-Business.

“It took a long time to educate and advise the community about the benefits of MPAs because it would be a sacrifice on their part for the medium-term. But we told them that protecting marine areas will pay them back over the long-term,” he added.

While the MPAs and seasonal fishery closure started out as just bay-wide initiatives, they have now been expanded across the entire Verde Island Passage (VIP). The VIP now has 36 MPAS and is regarded as home to some of the most biodiverse coral and fish species in the world, with more than 300 species of corals, underwater reef formations and rock canyons that host around 60 per cent of the world’s shorefish species.

In 2013, a pilot study was conducted in Balayan Bay which found that the two primary species of fish—round scad and mackerel—were initially abundant in the area, but were then significantly reduced. With no regulations on fishing, fishers resorted to catching juvenile fishes and so prevented the population from replenishing itself.

Worried about the decline in fish stocks, fishers gathered and agreed to implement the first seasonal fishing closure in 2014. After the two-month closure of the fisheries, fisherfolk saw the immediate benefits of a higher fish catch than before the closure, and agreed to yearly seasonal closures.

“The best thing that has happened for the local community is that they now understand and they want to implement these fishing disclosures and other related laws,” said Rodrigo De Jesus, chairperson of the Bantay Dagat (sea wardens) of Catalagan.

The Bantay Dagat is a volunteer-based law enforcement group tasked to detect and prevent illegal fishing in coastal waters to support the management and protection of coastal and marine ecosystems.

As the direct representative of fishers, De Jesus shared that conservation laws, coupled with active support from the community, have benefited them as it has eradicated the practice of dynamite fishing—a destructive fishing practice that uses explosives to stun or kill schools of fish for easy collection. The last case of dynamite fishing in the area was in 2015, De Jesus said with pride. Under the seasonal fishing closures, commercial fishers that land around 70-80 per cent of the fish catch are prohibited from fishing, but small-scale fishers can still fish using non-prohibited fishing gear such as hook and line or small nets.

The biggest difficulty from the two-month fishing closure is that fisherfolk are out of a job during the non-fishing period. To support their livelihoods in the off-season, a mixture of private, public and civic society sector partners have stepped in, such as Conservation International, renewable energy company First Gen and the national government, with various programmes.

In recent years, the government has also coordinated with technical and vocational training to provide programmes for skills development, so that fisherfolk are able to learn other skills such as construction, a beneficial skill in an increasingly industrialised Batangas province. Some fishers have also learned to look for employment in the tourism sector during these fishing closures, diversifying and increasing their sources of income.

“People are also beginning to appreciate conservation management and are realising that it’s doable. They’re more willing to sacrifice short-term gains before experiencing the positive effects of fishing closures. This is a big win for us, because it’s hard to influence people when they are struggling to sustain themselves,” shared Montebon.

Fishers have also learned to diversify their income and rent out their floating houses and boats to tourists that come from Manila. With better management of municipal waters, there has been an increase in tourism, shared De Jesus.

Along the VIP, southeast of Catalagan, sits another coastal village, Silonay in Calapan City, Oriental Mindoro. The village’s mangroves forest were put to the test during Typhoon Haiyan in 2013, which was one of the strongest typhoons that ever made landfall in the Philippines.

Fortunately for the coastal community, the mangrove forest acted as a protective barrier and shielded the community of more than 450 families from the worst effects of the typhoon and other various storm surges in the years that followed.

Since 2011, around 42 hectares of the total mangrove area surrounding the community have been designated as an MPA and called the Silonay Mangrove Conservation and Eco-tourism park, which is managed by the Sama-samang Nagkakaisang Pamayanan ng Silonay (SNPS), or the people’s organisation. The people’s organisation is led by village officials and community volunteers who dedicate their time and effort to conservation. 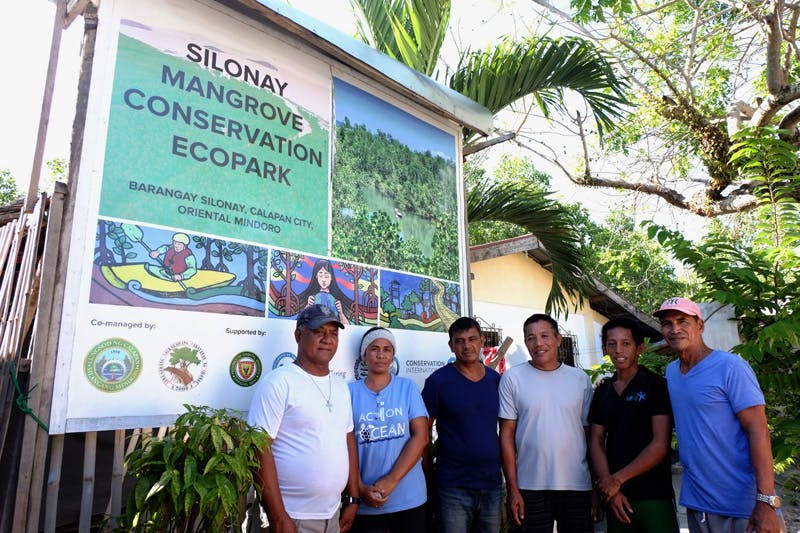 “When we say it’s protected, we mean that there are no illegal activities and villagers are prohibited to enter some of the protected zones. Conserving the mangroves has changed our lives for the better because we have protection against strong winds and storm surges, and it also provides additional income for the members of SNPS,” said Alma Bool, a full-time volunteer for SNPS.

Beyond protection from climate change, Silonay’s mangroves have also been providing a livelihood to the community through eco-tourism and improving fish stocks. Mangroves serve as the laying grounds for fish, as well as nurseries for juvenile fish.

“The first challenge was educating the community, because they didn’t understand the importance of mangroves before this. We used to cut mangroves for firewood or plywoods for building houses. We also used to dump garbage into the rivers. With Conservation International Philippines’ help to educate the locals, we limited most of these behaviours,” Bool said.

But the true turning point was Typhoon Haiyan, she added. “The community saw first-hand what mangroves are able to do during the typhoon. I can safely say that nobody here cuts the mangroves anymore. We also involved the community in planting mangrove trees, so that they will take charge of the area and take good care of it,” she said.

With the support of the local governments of Calapan City and Oriental Mindoro, CI Philippines granted Barangay Silonay a mangrove rehabilitation and income diversification project. In return, the community committed to plant 100,000 mangrove trees every year.

“I would like to see more youth involvement in the mangroves project because we’re not young anymore. Most members of the organisation taking care of the eco-park are over 30. There are so many youths here that are capable of being members of the eco park and could serve as tour guides to help with conservation,” Bool said.

Travelling further south, to Timor Leste, is Atauro Island, which scientists believe sits on the most biodiverse waters in the world. The island is just 23 km long and is home to 8,000 people.

In 2019, the communities of Atauro Island came together to unify 12 MPAs into a single network, with the goal of strengthening conservation efforts—and getting paid for it. As a result of the new protected area network, dive tourism businesses in the area have agreed to pay Atauro’s community conservation groups for access to the network’s pristine dive sites.

Conservation International began working in Atauro in 2015 to set up a system of MPAs, and in the last 6 years they have worked closely with communities to implement traditional laws and to establish the protected areas. Fish have quickly returned around these areas demonstrating the benefits of protection locally. 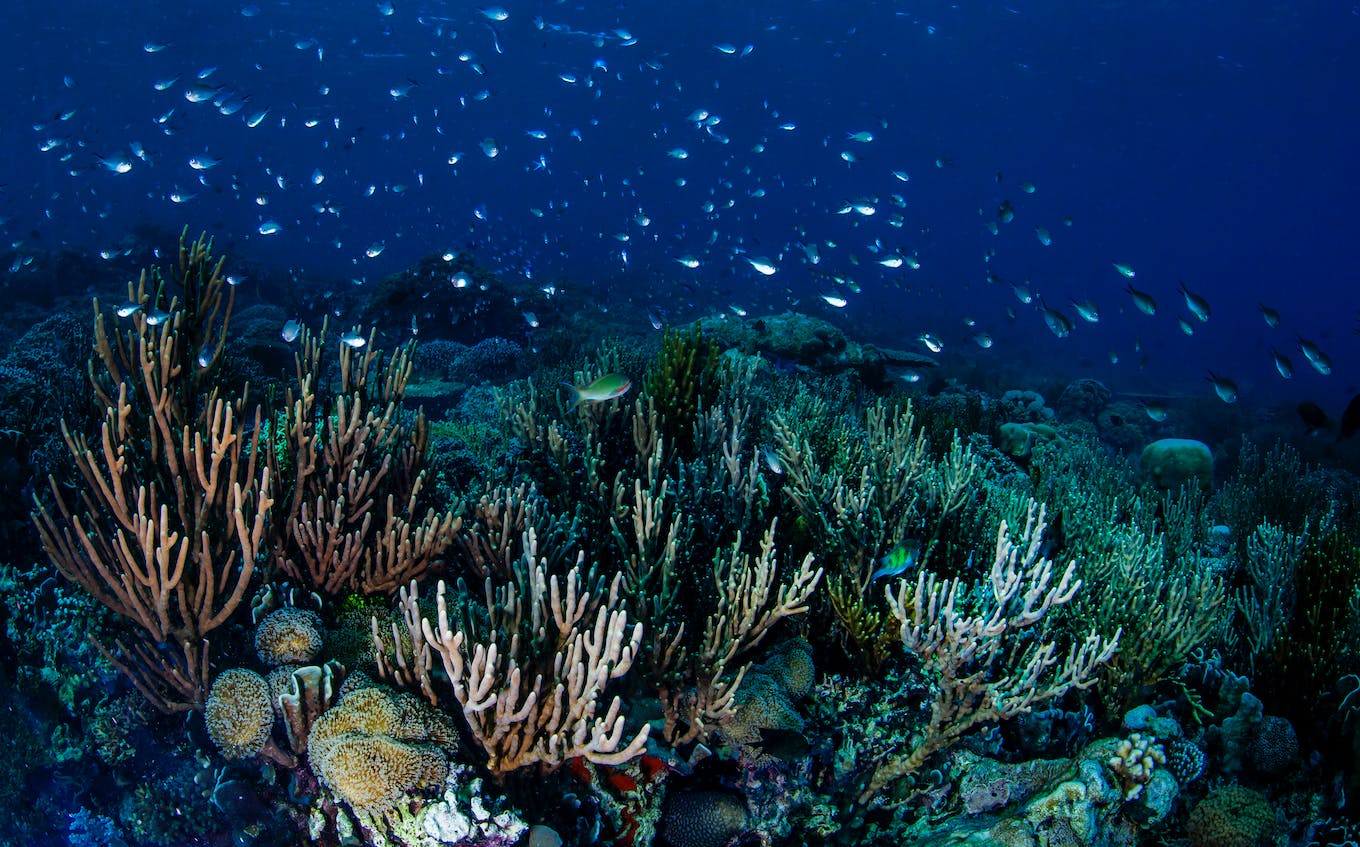 “Now there is an abundance of fish inside the MPAs and even spilling out, so we don’t need to go far to fish. We can fish on the edge of the MPA. To maintain this, we need capacity building activities for other livelihoods to prevent illegal fishing,” said Moises Exposto, member of the Community Control Group at MPA Duro (CCG) which functions similarly to the sea wardens in the Philippines.

The MPAs have also increased tourism and revenue as tourists from all over the world are keen to dive and snorkel in the pristine and remote waters. “The income we earned in 2019 was US$10,000, but this decreased by more than half in 2020 due to the pandemic. The money is saved in the community’s group account and some is used to buy rice, noodles, and oil to distribute to the 200 households in Beloi village,” shared Joas Martins, CCG member of MPA Beloi.

“This MPA really changed my life for the better because tourists now rent my boat to go to the MPA area to dive and also stay at my house either daily or weekly. All the money earned from this belongs to me and I use it for my family, and to fix up my house,” Martins added.

To ensure that everyone abides by the rules of the MPAs, the community is involved directly in the process of establishing these protected areas—rules and regulations are made by the community and local government themselves. There are also regular activities within the schools and larger communities to raise awareness about taking care of the marine resources in a sustainable manner.

Currently, the MPA network, with the support of Conservation International and local government, is preparing to submit a resolution to the government of Timor-Leste for Atauro Island and its waters to become a national park due to its significant biodiversity and extensive cultural and historical sites.

Eco-Business talks to 'Aulani Wilhelm of Conservation International about why a plan to protect the ocean is critical, and why it might just work.
Protecting 30 per cent of the ocean by 2030: Mission impossible?