In 2020, 227 land and environmental defenders were killed in 2020—an average of more than four a week. In Asia, the Philippines is the most dangerous country for environmental activists.

With worsening climate change effects being felt across the globe the situation for frontline communities and environmental activists is increasingly dire. 227 land and environmental activists were murdered in 2020 for defending their land and the planet, hitting record numbers for the second year in a row, a new report by international non-profit Global Witness, published on Monday.

Titled Last line of defence: The industries causing the climate crisis and attacks against land and environmental defenders,  the report mentioned that lethal attacks are taking place in the context of a wider range of threats including arrests, smear campaigns, and for women, gender-specific threats such as sexual violence.

On average, the data shows that four defenders have been killed every week since the signing of the Paris Climate agreement—but this shocking figure is likely to be an underestimate as there are growing restrictions on journalism and other civic freedoms—which means that cases are likely being underreported.

Once again, the Philippines surfaced as the most unsafe country in Asia for environmental activists. According to the report, the deteriorating human rights situation in the Philippines has received increasing condemnation from international actors – including the United Nations, European Union and the US government.

A UN report released in June detailed systematic human rights violations in the country—highlighting the dangerous rhetoric from the government, including calls for the bombing of indigenous peoples. 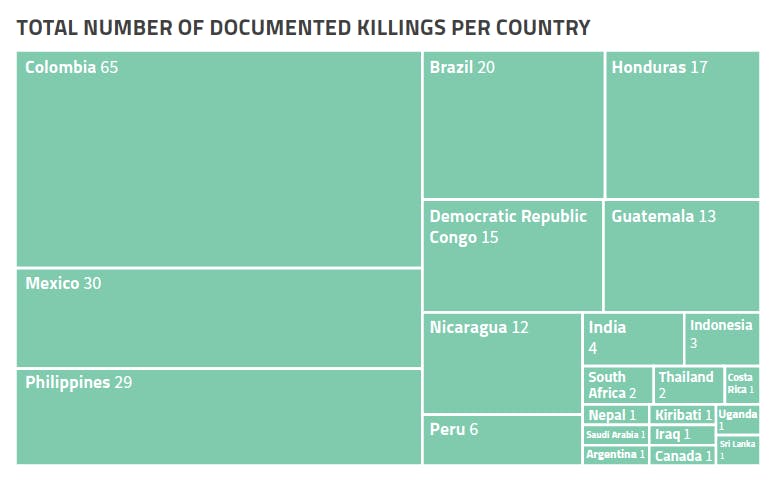 Total number of documented killings per country, with Philippines documenting the highest number of killings in Asia. Image: Global Witness

In the Philippines, opposition to damaging industries is often met with violent crackdowns from the police and military. Data from Global Witness found that over half of the lethal attacks were directly linked to defenders’ opposition to mining, logging, and dam projects.

President Duterte used the Covid-19 pandemic to further crackdown on dissent—implementing one of the strictest lockdowns enforced by the police and the military. The government also took advantage of the pandemic to rush through the Anti-Terrorism law, which came into effect in June.

Critics argue that this will accelerate ‘red-tagging’—labelling activists and social leaders as communist rebels—and will lead to an increase in violence against environmental and indigenous defenders. Duterte has prioritised mining for economic recovery from the pandemic, allowing the industry to operate throughout 2020, as well as recently reversing a ban on open pit mining. 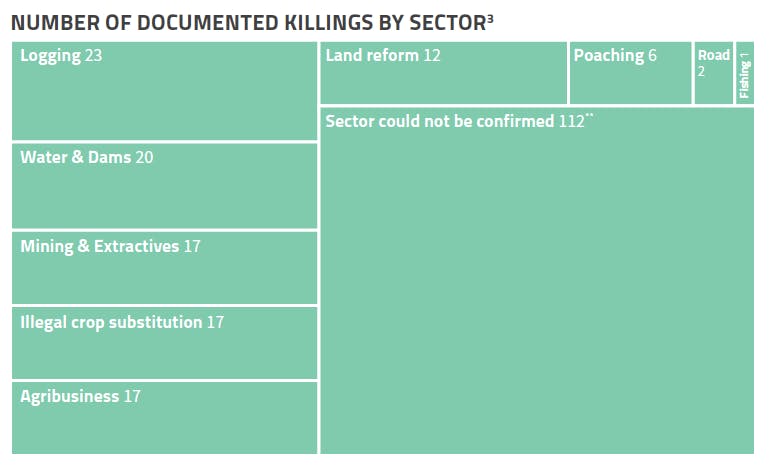 Number of documented killings per sector. Logging was the sector linked to the most murders with 23 cases - with attacks in the Philippines, Brazil, Nicaragua, and Peru. Image: Global Witness

The figures show the human cost of the destruction wrought by exploitative industries and corporations. At least 30 per cent of recorded attacks were reportedly linked to resource exploitation—across logging, hydroelectric dams and other infrastructure, mining, and large-scale agribusiness.

Logging was the industry linked to the most murders with reported 23 cases—attacks were in the Philippines, Brazil, Nicaragua, and Peru. This figure is likely to be higher as the reasons behind these attacks are often not properly investigated nor reported on, the report documented.

“One day, we hope to report an end to the violence against those defending our planet and their land, but until governments get serious about protecting defenders, and companies start putting people and planet before profit, both climate breakdown and the killings will continue,” said Chris Madden, senior campaigner with Global Witness.

“This dataset is another stark reminder that fighting the climate crisis carries an unbearably heavy burden for some, who risk their lives to save the forests, rivers and biospheres that are essential to counteract unsustainable global warming. This must stop,” he added.

Indigenous peoples were the target of 5 of the 7 mass killings recorded in 2020. In the most shocking of these, 9 Tumandok indigenous people were killed and a further 17 arrested in raids by the military and police on the 30 December on the island of Panay in the Philippines. Numerous reports state that these communities were targeted for their opposition to a mega-dam project on the Jalaur river.

Businesses and governments are to blame

The report found that many threats and attacks against environmental defenders occur after communities voice their concerns about companies and the projects which affect their rights. In countries rich in natural resources and biodiversity, corporations are operating with almost “complete impunity”, the report noted.

Businesses—often enabled or encouraged by negligent governments—are commonly responsible for toxic waste, air pollution and mass deforestation. But since the balance of power is tipped in the favour of the corporations, and against communities and individuals, these companies are seldom held to account for the consequences of their commercial activities.

In the occasional case that they are brought to court, it’s usually the trigger-men—the ones holding the guns—not the decision-makers, who take the fall. In addition, corruption on the local level often prevents any effective investigation by state law enforcement.

Companies with complex and opaque global supply and value chains are able to operate in countries with weaker governance and benefit from the accountability gap that exists between countries. “Globalisation has produced a disjuncture between business-related activities and the development of capabilities to govern those activities. These ‘governance gaps’ create an environment in which business-related human rights abuses can occur with relative impunity,” said Christiana Ochoa.

The report found that governments have failed to protect the environmental defenders, and in many cases, have even perpetuated violence against them or have been complicit with business. Countries like Sri Lanka and the Philippines have used the pandemic to strengthen draconian measures to control citizens and close civic space.

But governments also have the power to turn the tide on both human rights abuses and the climate crisis. The report recommends that governments ensure that national policies protect land and environmental defenders and eliminate legislation used to criminalise them. It also calls on companies and financial institutions to carry out mandatory due diligence that provides accountability for violence and other harm to environmental activists through their global operations and supply chains.

Lastly, governments should ensure access to justice by investigating and pursuing prosecutions of all relevant actors, including implicated corporate actors, for violence committed against environmental activists.