Why was there single-use plastic at this zero waste event in the Philippines?

To mark the fifth year of Zero Waste Month, Parañaque City held week-long activities to highlight the Philippines' waste reduction ambitions. But plastics used at the event were inconsistent with a ceremony that should have walked the talk.

I attended the launch of Zero Waste Month in Parañaque, a highly urbanised city found in Metro Manila, in its local sports complex.

The month of January is known as National Zero Waste Month in the Philippines, as mandated by then President Benigno Aquino III in 2014. It promotes the designing and managing of products and processes to eliminate waste.

While it was commendable for the city to highlight waste management among its priorities, some details in the event were inconsistent with the intended message. 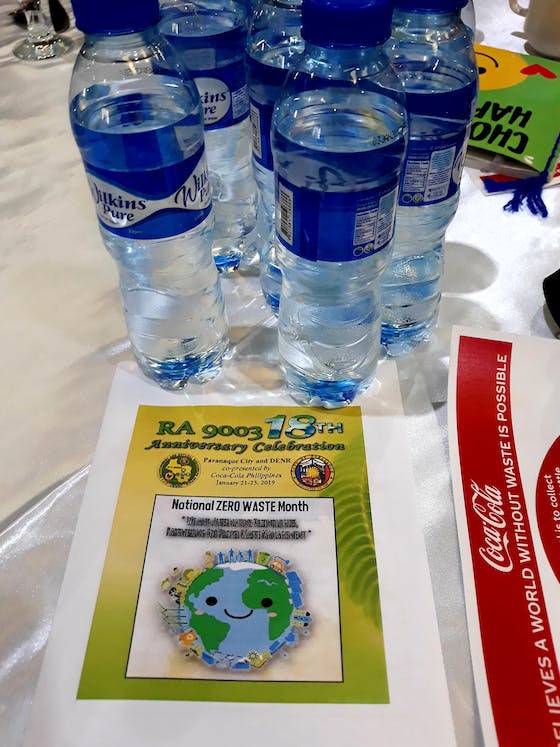 Water bottles made of PET at the event. Image: Eco-Business

Plastic water bottles sponsored by Coca-Cola were found on each table and snacks in single-use plastic were sold on the sidelines.

Single-use is a big problem for the Philippines, the world’s third largest plastic polluter. It wreaks havoc on the environment, affecting ecosystems on land and water.

Coca-Cola Philippines public affairs and communications manager Joy Munsayac clarified that the water bottles and their labels were made of polyethylene terephthalate (PET) while the bottle caps were made of HDPE plastic, which she said are all 100 per cent recyclable.

But a study last year by food and beverage trade body Food Industry Asia showed that the Philippines focused too much on designing recyclable products when this was the least effective solution to plastic leakage.

This finding matches the environmental bureau’s mandate to set up an MRF in every barangay—the country’s smallest administrative divisions. The establishment of MRFs falls under the Solid Waste Management Act (RA 9003), a law whose 18th year anniversary was also observed at the event.

Among its four registered MRFs, Parañaque only has one that is operational. The rest are yet to be established or stopped operations due to the rehabilitation of water lines in the area. A single operational MRF is considered a good state of affairs, as the others in Metro Manila have either been dismantled or are not working due to a lack of funds.

Knowing the limitations of recycling plants in the city, organisers of the event could just have been more mindful of the zero waste approach they were promoting and arranged for water to be served in refillable glasses.

There was also the irony of selling food in single-use plastics at a zero waste event. In the row of electronic bikes and solar lamps exhibited inside the sports complex, a stall that sold chocolate bars, junk food, and biscuits covered in plastic stuck out like a sore thumb.

The Department of Environment and Natural Resources (DENR), one of the event’s organisers, said that although its aim as a department was to be plastic-free, it “did not have enough time” to coordinate closely with the Parañaque mayor’s office.

“Arrangements were only finalised the week before the event. (In the first place) the exhibitors and participants were not under our control as they were invited by the local government unit,” DENR senior environmental management specialist Alma Ferareza told Eco-Business.

Meanwhile, the city’s environmental office acknowledged its mistake of using plastics in an event that was trying to promote waste reduction.

“Be rest assured that your observations were noted and our city will continue improving our implementation of RA 9003 on our waste management programs,” said Boi Mojica, assistant head of the city’s environment and natural resources office.

A solid waste management expert who was a guest speaker at the event told Eco-Business that it was “unavoidable” to have single-use plastic at the event as the industry has no viable packaging alternative.

Crispian Lao, a commissioner of the National Solid Waste Management, said that if food is not contained in safe packaging like plastic, it will pose a health risk to consumers.

“What we are saying is that we need to manage what we have for now. We want to see these plastic products not in landfill but converted into products that would be of value,” said Lao. 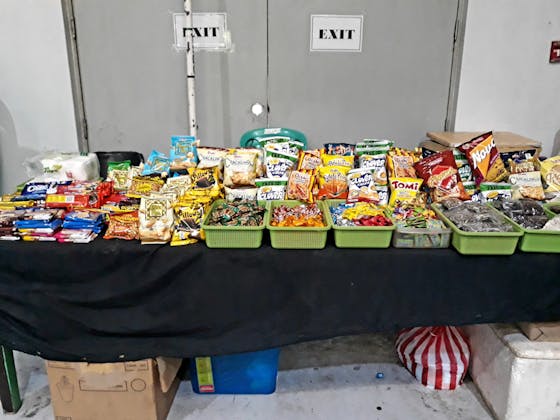 Lao gave examples of how single-use plastics could be “recycled” into new products. He is also president of Philippine Alliance for Recycled Materials (PARMS), a multi-sectoral industry organisation that aims to develop zero waste programmes for schools and communities.

Lao said PARMS has been working with seven public schools in Parañaque for a programme where students are asked to bring non-recyclable materials to be donated to their schools then collected and given to PARMS, which recycles these plastics into reusable products that the schools need. These range from school chairs and tables to building material like eco-bricks and extruded plastic lumber. This lumber is a precursor material which can be turned into building pallets and tire bumpers. 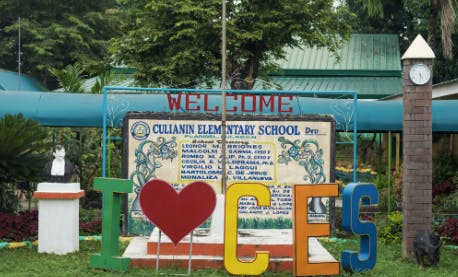 Eco-bricks make up this structure in a Parañaque public school. Image: Eco-Business

Through a partnership with the Parañaque city government, some space in an MRF is allotted to PARMS to serve as a centre for recycling plastic waste.

Lao added that the city government has also committed to issue an ordinance for all of its buildings to contain 1 per cent recycled material.

Eco-bricks are cheaper than concrete blocks and can withstant five times the load-bearing capacity.

“It is not yet our culture for people to pay more for recycled materials because the cost of recycling is sometimes too high,” said Lao.

“The whole idea is that if we can create value out of plastic material and integrate it into the economic system then the market is there, and the whole project becomes sustainable.”

As the Philippines grapples with 35,000 tonnes of garbage daily and more than 8,600 tonnes per day in Metro Manila alone, it will be interesting to see if more PARMS projects get the scale they need to have impact. The country is in dire need of them. 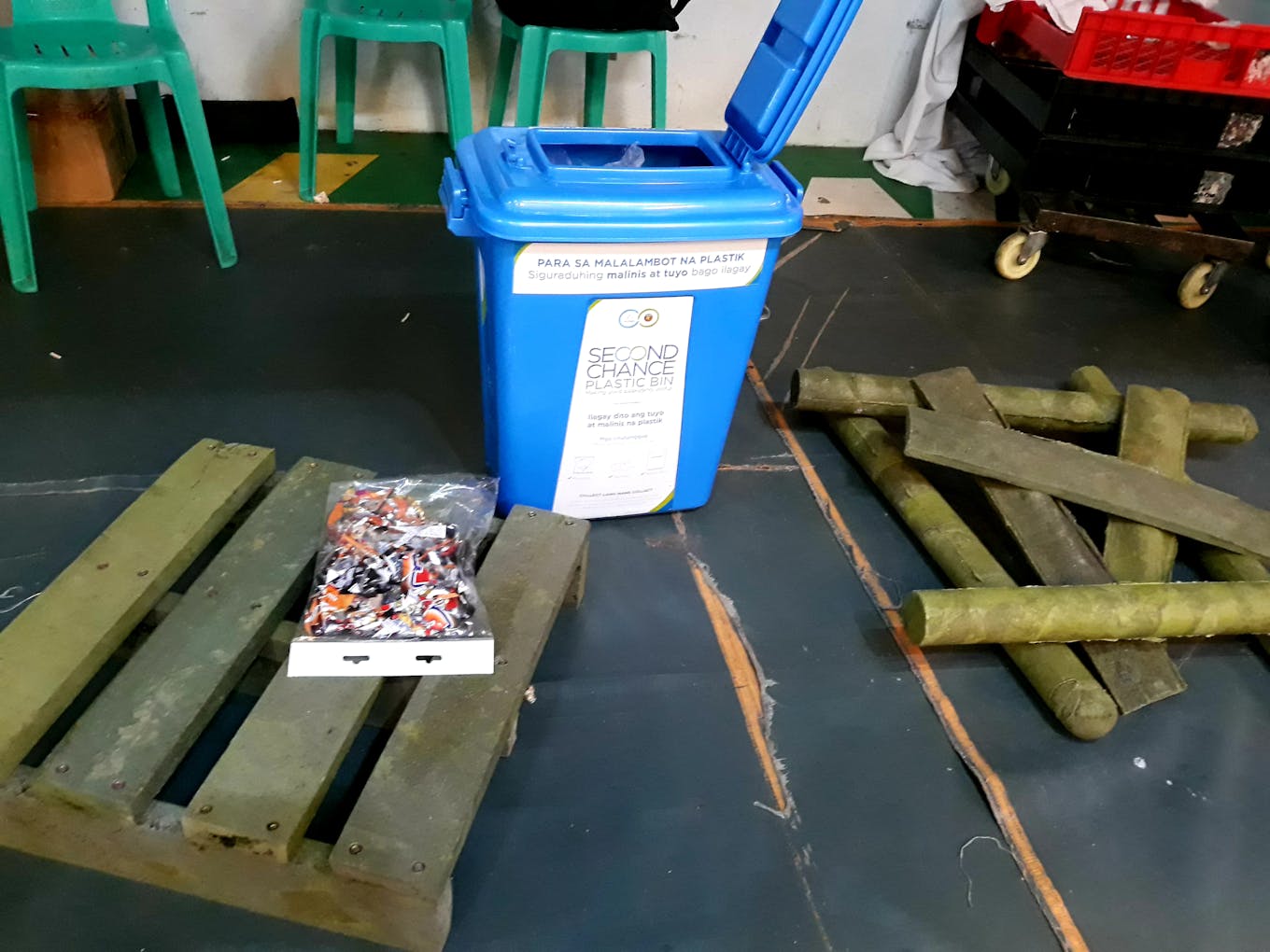 Used plastic wrappers and sachets can be recycled into new products like paletts (at the left) and plastic lumber (at the right) to be used as building materials. PARMS says it is improving on the strength of the material but at least more environmentally-friendly substitutes to concrete hollow blocks are emerging. Image: Eco-Business