Instant coffee, milk powder, food seasoning, shampoo and toothpaste sachets formed the majority of plastic waste collected in a week-long coastal cleanup in a reclamation area in the Philippines.

Nestlé, Unilever, and Procter & Gamble are among the biggest contributors to plastic pollution in the Philippines, a plastic waste study led by environmental group Greenpeace has found.

Volunteers sifted through plastic waste along a 200-hectare length of land on Freedom Island, off the coast of Parañaque in Metro Manila, from 13 to 20 September, and found that multinational companies were three of the top five contributers to the waste.

“It’s time these companies stop business-as-usual practices and used their resources to innovate and redesign their packaging and delivery solutions,” Greenpeace Philippines campaigner Abigail Aguilar said in a press conference on September 22.

Aguilar said she opposed the use of single-use plastic packaging and called for more sustainable solutions like the Extended Producer Responsibility policy, where companies take responsibility for their products after they’ve been used, and substitute non-reusable and non-recyclable products with greener alternatives, such as refillable containers.

It’s time these companies stop business-as-usual practices and use their resources to innovate and redesign their packaging and delivery solutions.

These thin films of plastic and aluminium made up 32.82 per cent of the plastic waste collected by the volunteers.

Nestlé did not respond directly to Eco-Business’ questions about the survey, but said that the company complied with Philippine laws on solid waste management.

The company added that it is working on a range of initiatives to address the lifecycle of its products and packaging.

Greenpeace media campaigner Angelica Pago commented: “They (Nestlé) are still promoting incineration and end-of-pipe solutions while Greenpeace advocates for waste reduction and banning of single-use plastics all together.”

In a statement, Nestlé responded: “We would like to clarify that we do not believe that incineration is an acceptable long-term end-of-life solution for used plastic packaging. However, we recognise that in specific situations where there is a current absence of available and scalable technology, energy recovery may be the only viable recovery option available in the short-term.”

Meanwhile, Unilever Philippines vice president for sustainable business and communications Ed Sunico told Eco-Business that the company welcomed the findings of the audit as it recognised the environmental impact of its products’ packaging.

“Unilever has been working to continually reduce its environmental impact. We’re reducing the amount of plastic in our packaging and we’re working with stakeholders to prevent plastic from ending up in landfill or in waterways and oceans. Globally, we are investing in ground-breaking new technology to recycle multi-layered sachets,” Sunico said.

He pointed to the CreaSolv Process, where plastic is recovered from sachets and used to create new ones.

The commercial viability of this process was slated to be tested by the end of this year, but Sunico said the company is still waiting for the results of the pilot.

A 2015 study identified the Philippines as the third worst plastic polluter in the world, with 1.88 million metric tonnes of plastic waste produced each year.

Waste plastic is hugely damaging to marine ecosystems. It degrades into small pieces called microplastics, which are mistaken for food by fish, shellfish and other marine organisms, and ultimately ingested by people. 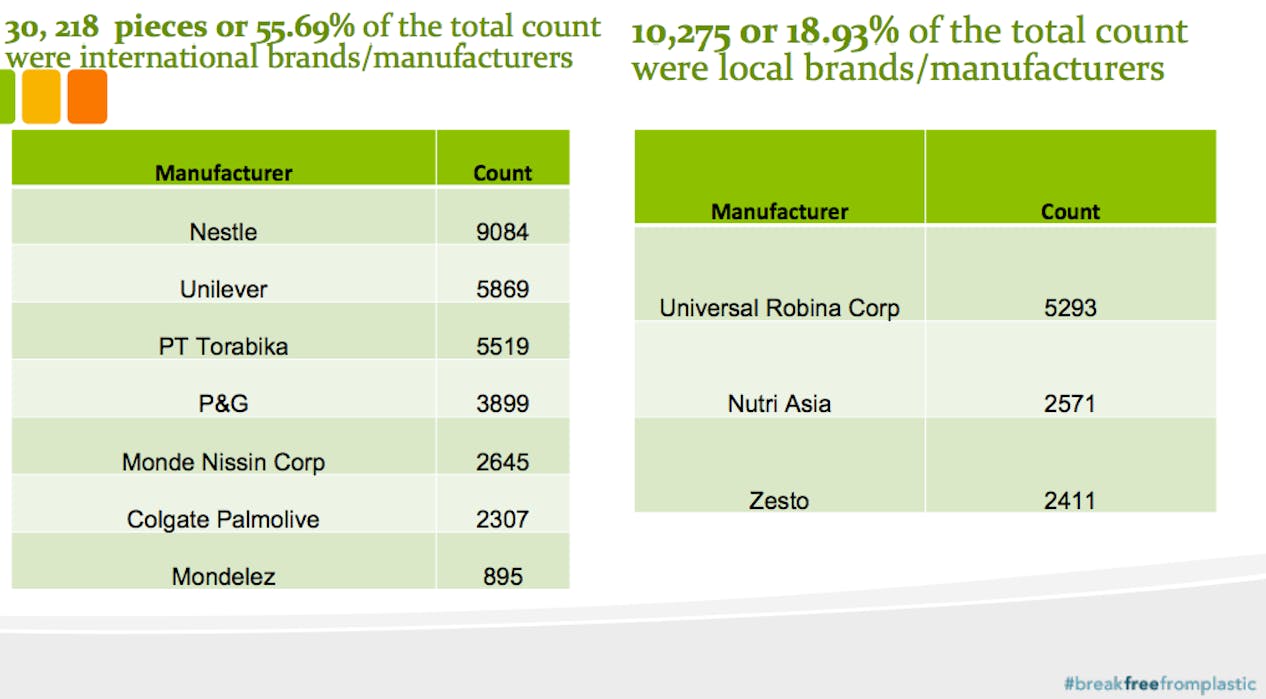 Out of the 54,260 collected waste recovered from Freedom Island, Nestlé, Unilever and Procter & Gamble were among the most frequently-seen contributors. Image: Break Free From Plastic