Time to step up climate action

The alignment between sustainable finance and responsible business could become an unprecedented, transformative force for decarbonisation, but the time to move is now, writes the founding director of the UN Global Compact, Georg Kell.

Our collective efforts to decarbonise markets are not happening fast enough—at this point in time it seems almost impossible that we’ll meet the goal to limit global temperature increases to well below 2 degrees Celsius, as pledged by 195 policy leaders at the 2015 United Nations Climate Change Conference. Despite technological progress and many good efforts by governments, corporations and consumers, we continue to dump more, rather than less, gases that cause global warming into the atmosphere, largely due to the burning of fossil fuels and the industrial use of animal stock (see the International Energy Agency’s World Energy Outlook 2018).

Despite the modest progress made so far, several recent developments indicate that we might be entering a new era of decarbonisation and a new way of doing business that may ultimately lead to dramatic emission reductions.

First, climate change is no longer a distant problem on the horizon that is discussed by scientists and activists only. The recent waves of natural disasters, wildfires, droughts and extreme weather have been urgent reminders of the effects man-made global warming has on our lives. The Intergovernmental Panel on Climate Change (IPCC)’s recent report has been a wake-up call for many decision makers. The report shows how a temperature increase of 1.5 degrees Celsius will cause significant health problems and social and economic dislocations. And a recent report by the US government, the 4th National Climate Assessment, spells out the dire consequences for the United States.

As evidence of the impact of climate change will undoubtedly intensify, our willingness to react will increase ever more over time. And as we are learning that markets do not function in isolation but depend on a healthy natural environment, ideas and technologies that enable low carbon and environmentally friendly economic growth are bound to become dominant forces. Value systems will change and so will valuation of well-being and market success. The speed at which this will unfold will depend on the degree of harmony between the different market actors. 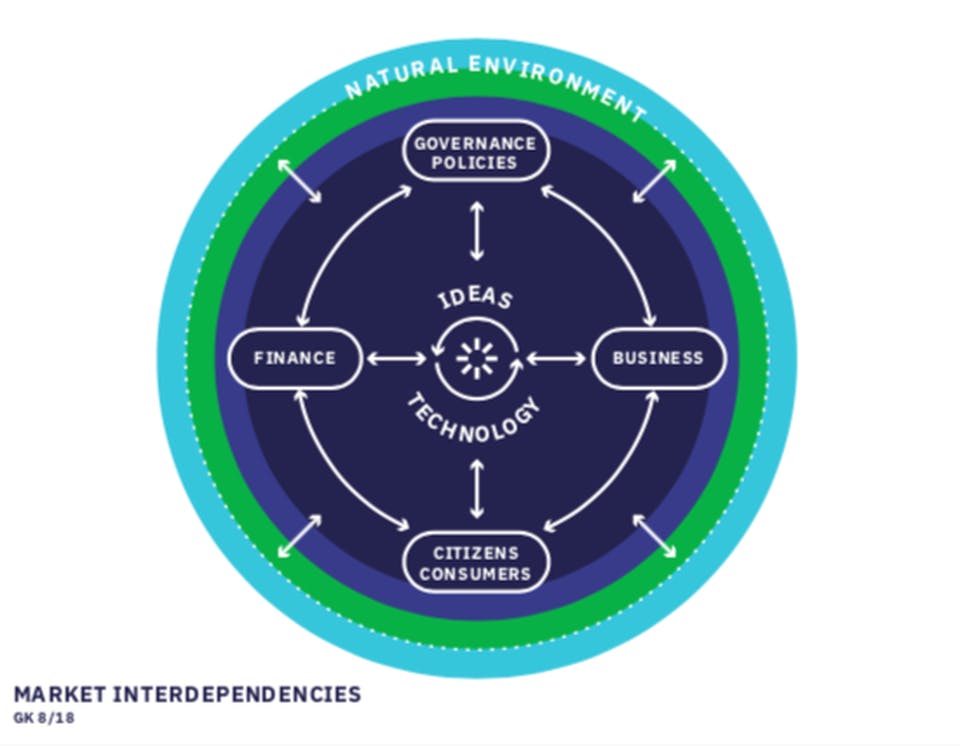 Second, the solutions required to tackle global warming are well known and available. What is missing is the political will to phase out old policies and to replace them with smart ones that encourage the protection rather than the destruction of our natural environment, and that put a price on carbon high enough to stimulate the growth of clean energy systems. The political track record so far has been mixed at best. Old dogmas are still shaping market systems. The myth that green growth comes at the expense of the economy is still cultivated in some circles which have a short-term interest to maintain the status quo. After all, there is still money to be made by burning the globe. Worse, geopolitics is back and trumps markets again. This raises the worrisome spectre of turning back the clock to the dark ages.

But there are also encouraging developments that point the way forward. Small economies such as Sweden and Costa Rica show that with the right policy alignments and the collaboration of the corporate and finance community, and with the support of the people, rapid decarbonisation is not only possible, it is also highly profitable and an engine of long-term growth, technological excellence and social well-being.

These examples are inspiring, but of course over time the big powers will need to change as well and a new level of global cooperation is required. Irrespective of how big power rivalry will unfold, it is fair to assume that ultimately nature will force our hands, one way or the other. And maybe climate change will, out of necessity, become the unifying force of humanity and give the arms race a common enemy at last. Historians and philosophers have long known it: The Enemy is Us.

Third, even in the absence of strong political leadership, there are promising market-led developments that suggest that systemic change is in the making. For many years, numerous organisations around the world, such as the United Nations Global Compact, the Global Reporting Initiative (GRI), the We Mean Business Coalition, and the Climate Disclosure Project (CDP) have worked with corporations to reduce emissions by setting targets and disclosing relevant information—albeit with only incremental success. They recently pooled efforts around the Science Based Targets Initiative in order to ensure a better level playing field and the Task Force on Climate-related Financial Disclosure (TCFD) has given much impetus for the disclosure of relevant information.

We can also now witness bold actions by corporations around the world indicating that the time for major transformation has come at last. For example, the German company Volkswagen recently announced ambitious plans to spend over €40 billion through 2023 in the critical areas of electrification and e-mobility. This in turn will have a signal effect on suppliers and consumers and will expedite the use of renewable energy and smart power systems. The Chinese GEIDCO initiative is busy supporting the building of high voltage transmission lines that enable the transport of renewable energy in many countries over long distances and with minimal losses. In Norway and Sweden, numerous innovative partnerships are developing clean energy and digitalisation solutions, covering areas such as shipping, heavy road transportation and “green battery concepts”.

As we are learn that markets do not function in isolation but depend on a healthy natural environment, ideas and technologies that enable low carbon and environmentally friendly economic growth are bound to become dominant forces.

True, corporate actions have so far only had little impact on the overall picture. The 2017 Yale University study Who’s Acting On Climate Change, for example, shows that if the commitments made by the 2,100 companies and 6,900 cities covered in the study were fully implemented, this would amount to a reduction of only 1.5 to 2.0 billion tons of CO2 emissions, less than 4 per cent of the current 52 billion tons we collectively emit into the atmosphere every year. To reach greater scale and impact, many more companies and other non-state actors need to take bold climate actions. In the absence of policy incentives, it is hard to see how this will happen.

However, not only corporations are on the move. Investors have increasingly been picking up the signal that climate change is affecting their portfolios. Since the launch of the United Nations-supported Principles for Responsible Investment (PRI) in 2005, the finance community has increasingly been integrating environmental, social and governance (ESG) factors into their analysis and decision making. Today, over US$ 20 trillion assets under management globally are now invested according to ESG factors (see The Remarkable Rise of ESG). Some investors are opting for divestment of fossil fuel options which have reached over US$ 6 trillion.

Many mainstream investors, however, are adopting “soft transition” strategies that allow for proactive engagement and provide incentives for corporations to improve their emission footprint. As perceptions about risks and opportunities are changing fast, so do concepts of valuation. New tools such as Arabesque S-Ray and the forthcoming “Celsius Score”—which evaluates companies based on their climate performance—enable investors to relocate capital away from polluting companies or from companies that are unwilling to improve their climate footprint towards future-fit companies for whom decarbonisation is a winning strategy.

There is still much work to be done to improve disclosure and data availability. But thanks to digitalisation and artificial intelligence, even fragmented data already enables investors to establish robust relationships between material corporate performance and financial valuation, and thus drive decarbonisation.

The alignment between sustainable finance and responsible business has all the ingredients to become a transformative force on an unprecedented scale. By showing that there is more money to be made by funding clean and green practices than by burning the globe, market-led changes not only accelerate decarbonisation on a massive scale. They also show governments the way forward, and encourage them to take bold actions to replace outdated industrial-era policies with climate-smart policies which we ultimately need to defeat the climate change threat.

Georg Kell is Chairman of Arabesque & Founding Director of the United Nations Global Compact. This article was first published on Forbes and has been reproduced with permission.