How technology can help address challenges in agriculture

With the world's population expected to hit 9.7 billion by 2050, agriculture needs to become more productive and sustainable.

When agriculture first took root around 12,000 years ago, it triggered a change in how people lived. Dubbed the “Neolithic Revolution”, the promise of a reliable food supply enabled humans to give up their nomadic hunter-gatherer lifestyles. Out of these first settlements grew cities and complex civilisations, shaping the world as we know it.

Agriculture has allowed the human population to grow explosively, and its industrialisation over the past two centuries fuelled the jump from 1 billion to nearly 7.7 billion people. As a result, agriculture in its modern form has tested the limits of our environmental resources.

With a projected 2 billion more mouths to feed across the world by 2050, agriculture needs to simultaneously become both more productive and sustainable. That requires increased investment and adoption of productivity-boosting technology and participation from young people and smallholder farmers.

Human ingenuity, scientific breakthroughs and technological advances have given the world an unprecedented array of tools to transform the food system and mitigate its impact on nature and climate.

In precision agriculture, real-time weather forecasting helps farmers with day-to-day decisions on when and how much to irrigate, fertilise and apply pesticides to their crops.

Ultra-high resolution imaging can spot early symptoms of disease, water stress and soil degradation, while drones spray fertiliser, pesticides, and water with pinpoint accuracy. By reducing the guesswork in farming, smart agriculture enables crops to reach their full genetic potential without the excessive use of chemical inputs.

Biotechnology is another field that continues to make breakthroughs. Advances in seed science are making crops more resistant to drought, pests and infestation, boosting agricultural productivity and increasing the resilience of food producers to environmental shocks.

But increasing the ability to produce more food using fewer resources will have a limited impact, if the world does not also tackle the problem of food waste and loss.

Food is lost and wasted at each stage of the food supply chain, from harvest to storage to transportation, and then at the retailer and consumer end. Here, again, technology can play an important role.

Increasing the digitalisation of agriculture improves the overall efficiency of the entire agri-food system. Online marketplaces connect farmers directly with consumers, reducing the number of intermediaries and transit nodes that food must pass through. This not only boosts the income of farmers by cutting out the middlemen, but it also leads to less time spent in transit, reducing the amount of loss and waste. 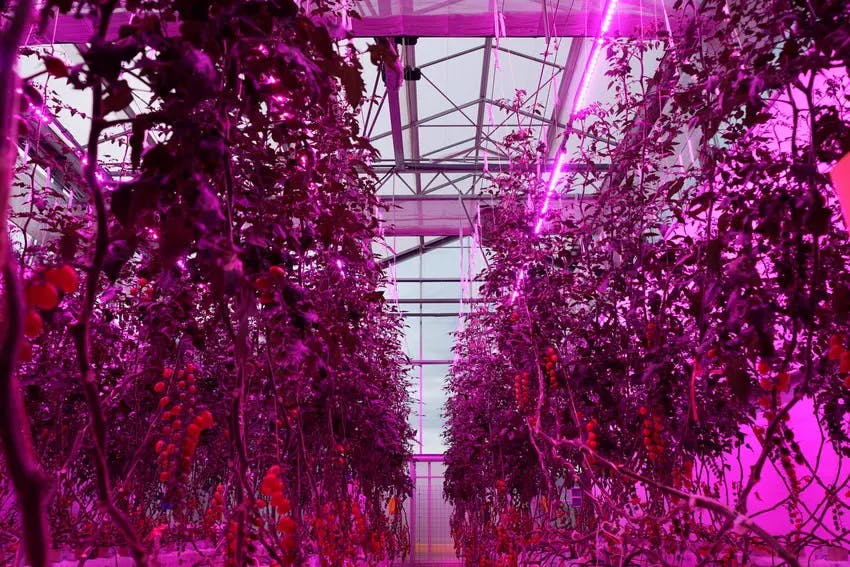 Tomato vines at the Pinduoduo Smart Agriculture Competition greenhouse are bathed in artificial lighting to aid in their growth. Image: Pinduoduo

Reducing this waste requires a reengineering of the logistics system that moves food from farm to fork. For example, Pinduoduo is developing a new agri-focused logistics infosystem that plans out new cold-chain transportation routes to eliminate unnecessary transits.

Garlic sold by farmers in Henan to consumers in Shanghai on our platform travelled 16.1 per cent less distance and expended 38.1 per cent less fuel per tonne. It also helped to cut food loss and waste to 25 per cent of production, instead of the global average of around 40 per cent.

China is also taking steps to curb food waste at the national level. Last year, Chinese lawmakers voted to adopt an anti-food-waste law in April. According to the law, catering service providers can impose a levy on customers who leave excessive amounts of food waste.

The success of any agricultural technology ultimately rests on the rate of adoption among farmers, in particular, smallholder growers.

Five of every six farms in the world are smaller than two hectares (the size of about three soccer fields) and collectively they produce a third of the world’s food. In the case of China, smallholder farmers account for as high as 80 per cent of food production.

Many of these smallholder farmers are older and received less formal education, making it more difficult for them to adopt technology without support. The availability and accessibility of internet infrastructure is also a potential barrier in some countries.

An annual Smart Agriculture Competition, organised by Pinduoduo, with support from the United Nations Food and Agriculture Organization, attracts participating teams from top universities and research institutes from around the world to devise technology solutions that can help smallholder farmers increase their productivity and environmental sustainability.

In this year’s contest, 80 per cent of the participants are in their 20s, which bodes well for the future of agriculture. Technology developed during the competition is now applied in several major agricultural regions in China.

As a primary sector that employs millions of people directly and throughout the supply chain, agriculture has lagged behind many other sectors in digitalization and application of digital technology. Luckily, however, it is not too late to catch up, but the sector needs more investment, more new ideas and greater participation.

With the task of feeding a growing global population, agriculture stands at yet another important juncture. It is in our collective interest to help agriculture and the global food production system transform so that they can nourish us in a sustainable manner.

Xinyi Lim is the executive director of sustainability and agricultural impact at Pinduoduo.

The article was first published in World Economic Forum.