Investments in sustainable infrastructure and initiatives in a city can exacerbate inequality by further marginalising local communities. How can cities design for sustainability while putting people at the centre of their plans to green?

When Hurricane Katrina hit New Orleans 14 years ago, hundreds of thousands of people lost their jobs, homes and possessions. But some people were hit harder than others. Nearly two-thirds of jobs lost after the hurricane were lost by women, and nearly 80 percent of the population of flooded neighborhoods were people of color.

Cities account for nearly 70 percent of greenhouse gas emissions and many of them, like New Orleans, are experiencing more instances of extreme weather, heat, droughts and flooding due to climate change. Climate change negatively affects poor communities, women, people with disabilities, indigenous groups and other marginalised populations the most.

That’s why it’s so important for cities tackling climate change to engage with these frontline communities in the designing of actions to reduce greenhouse gas emissions and adapt to climate change.

Green gentrification and the unintended consequences of climate action

The Yellow Vests movement in France and protests in Chile against metro fare increases showed that national climate actions, when designed without a consideration for equity, can have unintended consequences. This can happen in cities, too.

Medellín’s transformation from one of the Colombia’s most violent cities to a vibrant and more sustainable metropolis — with more green spaces, cleaner transit and easier access to jobs — has not come without social costs. The city’s El Cinturon Verde Metropolitano initiative was designed to increase the city’s open space for recreation, and involved creating an extensive urban park or ‘greenbelt’ around the city boundaries and upgrading nearby housing.

While the initiative has generally improved public safety, health and food security in the city, it created trade-offs for local communities. When the city’s primary trash dump was converted into gardens, more than 14,000 families were displaced from the area, many of whom were relocated to the outskirts of the city away from core services like health clinics and grocery stores. Local waste pickers lost their jobs, with little recourse.

And many low-income residents remaining in the area around the greenbelt still worry about being displaced and losing access to the land that they cultivate and rely on for their livelihoods.

This has also happened in Brooklyn, New York. Various sustainability projects, including park cleanups, riverbank restorations, and the transformation of a toxic industrial canal into the “Venice of Brooklyn,” have all sought to improve the quality of life and environmental health of communities in the densely populated borough.

But these environmental improvements have helped fuel affordability challenges. Rental prices have increased disproportionately around Prospect Park, which underwent a $10 million restoration beginning in the 1980s. A recent geospatial analysis found that housing around community gardens in Brooklyn catered primarily to higher-income residents.

These kinds of unintended consequences are called “green gentrification“—when investments in sustainable infrastructure and initiatives in a city push out and price out lower-income residents. Unaddressed, these barriers can limit climate action and policies from reaching their full potential. 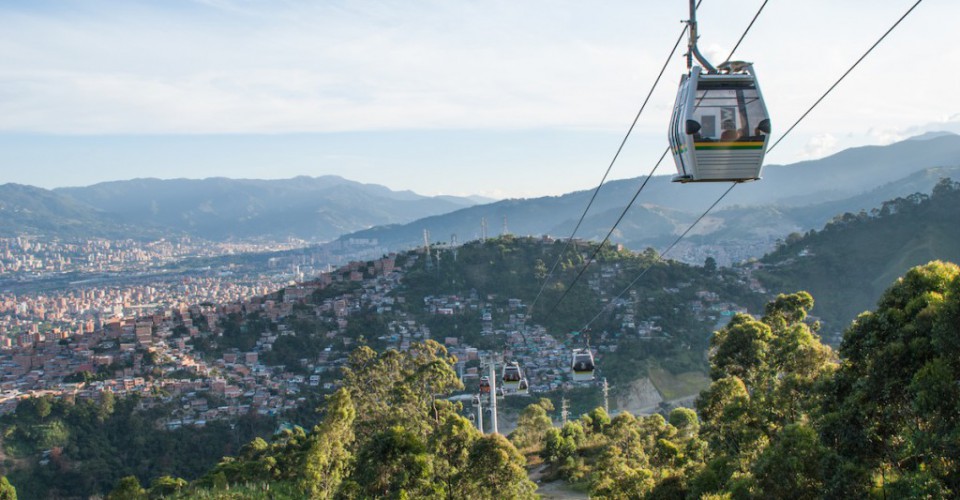 If designed well and with citizens and communities in mind, climate action can avoid green gentrification and can help address some of the pre-existing social and economic inequalities in cities. Despite facing some displacement challenges with its greenbelt project, Medellín used community engagement to identify and develop a more inclusive new transit service: the Metrocable.

In 2004, Medellín opened an aerial tram system known as Metrocable, which was the first in the world to be fully integrated into the city’s broader urban transit system. This project grew from a new commitment by the city to invest in public services and community outreach, which was part of an overarching effort to improve the social, environmental and economic wellbeing of the city and its residents.

This new cable car line connected remote hillside neighborhoods to the center of the city, improving access to jobs, schools, cultural events and other opportunities for lower-income residents who might have otherwise been excluded from these opportunities and taken higher polluting cars and buses. The city now must ensure that areas around the Metrocable don’t gentrify too fast, pushing out residents.

The Yellow Vests movement in France and protests in Chile against metro fare increases showed that national climate actions, when designed without a consideration for equity, can have unintended consequences.

For a city beginning to think about climate action, the first step is to consider local context and priorities. For instance, if a city has a large portion of its residents living in informal housing in low-lying coastal areas, urban practitioners should consider how climate change will particularly impact these groups. Stronger storms could cause increased flooding and damage to already weak structures.

The key is to put people at the heart of planning and ask: Which groups or frontline communities in my city are impacted by climate change? When it comes to climate action, who has access and who does not? City planners must understand how access to services and policies differs amongst parts of the urban population in order to design policies to reach the maximum amount of people, and particularly those most in need.

When designed for all, climate actions can contribute many other benefits besides reducing greenhouse gas emissions, such as improving health and well-being, increasing economic prosperity, and strengthening institutions and governance. By diagnosing the broad areas where the city is doing well — and not so well — city decision-makers can prioritise climate policies that target specific needs.

Cities like Cape Town and Los Angeles are already analysing existing climate policies and implementing climate actions through an equity lens. Through this lens, urban decision-makers look at the benefits and challenges of potential climate actions for access and availability, prosperity, affordability and spatial inclusion. This lens can ultimately help city officials develop policy recommendations that have wider benefits for all.

For example, when London introduced a congestion charging zone in the city center, it provided exemptions for people with disabilities, drivers of electric vehicles, and emergency services.

Lastly, all cities need to measure and track inclusion and equity impacts of climate actions. Disaggregated data by neighborhood, income, gender and other key indicators will inform city decision-makers whether policies are well-designed and if their impacts are equitably distributed. The indicators module provides guidance on this, and comes with a database based on existing practices from cities around the world.

For example, Pittsburgh is already identifying key indicators (e.g. access to green space) and data it will need to collect to measure improvements in equity (e.g. ratio of access between black and white residents over time) to ensure that the city is creating the most impact with its climate actions.

The roadmap to Inclusive climate action

The roadmap for inclusive climate action planning can help cities to identify communities that may be particularly impacted, both positively or negatively, by climate actions, and then design policies that reduce barriers groups face in participating in and benefiting from proposed climate actions.

While each city must respond to local context, geography and culture, there are also significant opportunities to share learnings between cities on how to deliver inclusive and equitable climate action globally.

A step-by-step guide for cities to put people and local considerations at the heart of climate action is available here.

Maria Hart and Jillian Du are from the WRI Ross Center for Sustainable Cities. This article was originally published on the WRI blog.