Carbon emissions from agriculture can be significantly cut while still meeting the food demands of the world’s growing population, a new study says.

Agriculture and food production is responsible for around 30 per cent of global greenhouse gas emissions. Slashing the sector’s emissions is considered to be key to limiting global warming to 1.5C above pre-industrial levels, which is the aspirational target of the Paris Accord.

However, adopting negative emissions strategies, such as soil carbon management, will be essential to help the farming industry reduce its carbon footprint without threatening the global food supply, the lead author tells Carbon Brief.

The new study marks an important step in our understanding of how to tackle the “wicked problem” of food insecurity in a changing climate, another scientist tells Carbon Brief.

Making a meal of the planet

Food production contributes to global warming in a number of ways. Agricultural machinery and the transportation of crops and animals cause the release of CO2, crop fertilisers release nitrous oxide, and methane is released by rice paddy fields and livestock.

Growing demand for food has also led to the global expansion of farmland at a rate close to 10m hectares per year during the past decade. Some of this land once supported rainforests, which stored huge stocks of carbon.

Overall, the production of food is thought to account for around 30 per cent of all greenhouse gas emissions.

Cutting emissions from agriculture is, therefore, considered to be vital to limiting warming to 1.5C above pre-industrial levels. To slash agricultural emissions, it is likely farmland expansion into forests will need to scaled back, fertilisers used more efficiently and lost trees replanted.

There are of course uncertainties related to the mitigation potential from soil carbon sequestration, but if these potentials were to be achieved, the impacts on food security could be significantly eased.

However, these mitigation techniques will take up precious farmland and could have an impact on global food production, explains Dr Stefan Frank, a researcher at the International Institute for Applied Systems Analysis (IIASA) in Vienna and lead author of the new study published in Environmental Research Letters. He tells Carbon Brief:

“Reducing global emissions may affect food availability as agricultural land could be diverted from food production to energy use for fossil fuel substitution, such as biofuels. Mitigation efforts may also limit land available for agricultural expansion due to the need for protection of high carbon landscapes, such as forests.”

His research investigates how strategies to cut emissions from the agriculture, forestry and other land use (AFOLU) sector could affect both global warming and food availability by 2050.

The research uses mathematical models to simulate the expected fall in emissions if the agricultural and land use sector employed mitigation strategies with the aim of limiting warming to 1.5C above pre-industrial levels by 2050.

One way to meet this goal would be to introduce a “carbon tax” on food, the study finds, whereby foods that cause high carbon emissions during their production, such as beef and rice, are taxed the most.

This tax could encourage agricultural businesses to find ways to reduce their carbon emissions, Frank says. He adds: 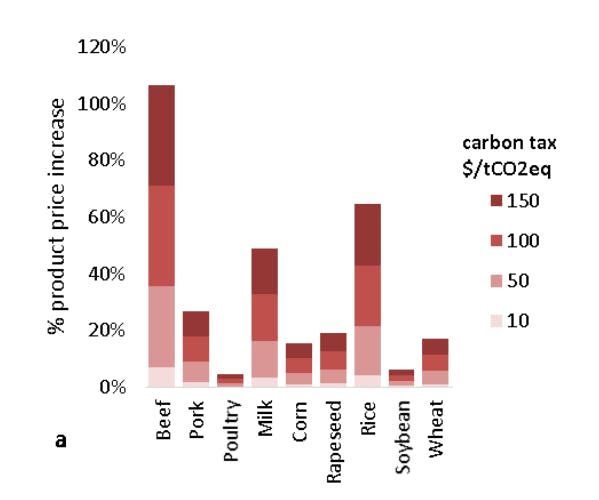 However, although the introduction of a carbon tax could help to cut farming emissions, it could also threaten the food security of the world’s most vulnerable people, the research suggests.

This is because a tax on food could restrict the calorie intake of low-earners who are vulnerable to food price hikes. In many parts of the developing world, poor people spend as much as 60-80 per cent of their income on food, according to the World Food Programme.

Using models that consider these caveats, the researchers simulated how a range of carbon taxes on food production could affect the average calorie intake across the globe by 2050, if efforts are made to limit warming to 1.5C above pre-industrial levels.

They found that carbon taxes on food production could result in global food calorie losses ranging from 110 to 285 kcal per person, per day, by 2050, depending on the level of tax that is introduced and the market conditions. This could translate into a rise in undernourishment of 80-300 million people in 2050, the researchers say.

However, the assumption that a fall in calorie intake will lead to a rise in undernourishment and lower food security could be too simplistic, says Tim Benton, a professor in population ecology at food security at the University of Leeds, who was not involved in the study. He tells Carbon Brief:

“[The analysis] tackles only a part of the whole issue. Globally, poor diets are driving ill-health through providing too many calories and not enough nutrition, so what we produce and how we produce it needs to change to provide healthier diets: calories are not a good proxy for food security.”

However, the potential rise in undernourished people as a result of a carbon tax on food could be stemmed if “win-win” emissions mitigation strategies are also implemented, the research suggests.

One “win-win” strategy outlined by the research is soil carbon sequestration, or the introduction of farming methods that encourage soil to absorb more carbon from the atmosphere. It is considered to be a “win-win” mitigation strategy because it can help to boost crop productivity as well as lower agricultural emissions. Frank says:

“There are of course uncertainties related to the mitigation potential from soil carbon sequestration, but if these potentials were to be achieved, the impacts on food security could be significantly eased.”

The research finds that introducing soil carbon management on a global scale could enable us to achieve the target of limiting warming to 1.5C at a “considerably lower calorie cost”, says Frank.

The models find that introducing good soil management could reduce the fall in daily calorie  intake by 65 per cent, when compared with scenarios that do not consider carbon sequestration.

“There are several other “win-win” options such as reducing food waste and harvest losses, or societal dietary change that were not explicitly assessed in this study but if realised together, they could even enable us to achieve this goal [of limiting warming to 1.5C above pre-industrial levels] without compromising food security at all.”

The study offers us insight into how the causes of food insecurity as a result of climate change are often complex and indirect, says Prof Benton:

“Rising food insecurity is painful to contemplate, but it is a wicked problem. Without mitigating climate change, its impacts on food security are also likely to increase the number of food insecure, either directly or indirectly (through promoting conflict).

“This is an important study which shows that carbon pricing can drive positive effects, but can also drive negative effects. It sets an agenda about how to avoid the negatives, whilst embracing the positives.”