News The people behind palm oil

Mounting attention on women’s rights violations in the palm oil industry have pushed women workers out of the shadows, forcing companies to step up and improve the welfare of their female workforce.

In Indonesia, where close to 6 million people work in the palm oil industry, women toil alongside men in remote plantations across the country.

However, female plantation workers are unlikely to be included in that number, as investigations on labour issues in the palm oil industry suggest. Many rural women living in villages surrounding the palm oil estate constitute the informal workforce and are referred to as kernet workers, who help harvesters meet high quotas by picking up loose fruit.

Kernet workers are typically not employed directly by palm oil companies and are paid by plantation workers themselves.

“Women workers are some of the most vulnerable and at-risk in the workforce,” said Fitri Arianti Sukardi, Indonesia relations officer at the California-based environmental organisation Rainforest Action Network (RAN). RAN, together with local non-profit OPPUK and the International Labour Rights Forum (ILRF), released an updated report last year on the “The human cost of conflict palm oil” that documented worker exploitation on plantations certified by the Roundtable on Sustainable Palm Oil (RSPO) in Indonesia.

Many of the issues highlighted in the report, such as casual employment, exposure to hazardous pesticides and lack of social security, are problems largely faced by women.

According to Sukardi, working under kernet, casual or part-time status are all precarious forms of employment which translate to fewer rights for women. This is because the roles dominated by women, such as palm fruit collection or upkeep of the plantations, are not recognised as permanent jobs in the industry, leaving them with little access to healthcare, insurance or fair wages.

Sukardi told Eco-Business: “There is a misconception that maintenance work is seasonal but a lot of women workers who do this casual labour have been doing it for 20 years without the benefits of job security.”

A cycle of precarious employment for women

Bimbika Sijapati from the Center for International Forestry Research (CIFOR), a non-profit research organisation headquartered in Indonesia, refers to the denial of women’s rights in the palm oil industry as part of a “structural problem that restricts women’s access and mobility,” especially because women are specialised into certain jobs such as palm fruit collectors and maintenance workers. 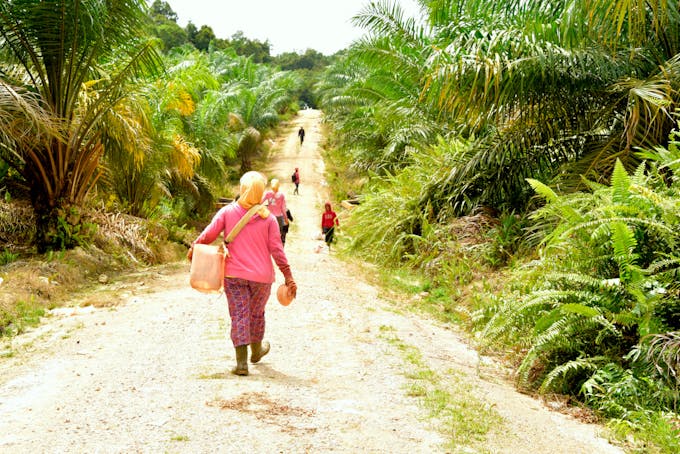 According to Lim Shu Ling, head of sustainability communications at Singapore-based palm oil company Golden-Agri Resources (GAR), the issue of women’s work status is more complex and that division of labour in the palm oil industry does not necessarily reflect discrimination against women. Some jobs, such as harvesting heavy palm oil bunches, are physically demanding and are thus assigned to men.

“I suppose one might look at agribusiness and think that the women may not be treated equally as men, because of the perception that more women are doing part-time jobs,” she said. “But there’s a danger of not looking closely enough at the specific conditions in the agricultural sector and how women’s roles play out in more rural settings in an agricultural community.”

She added that many women prefer flexibility in their working hours and are usually juggling a variety of household jobs, which is why most of them are hired as part-time workers. GAR offers women workers who choose to work part-time fixed-term positions so that they are able to attend to other responsibilities such as tending to the household, maintaining family gardens and running side businesses.

The majority of plantations are provided with facilities that benefit women, such as daycare centres for their children, clinics and community centres that offer skills upgrading and health education classes. One of the areas where women are participating quite actively compared to men is fire prevention on palm oil estates, where “women are at the forefront” of such programmes, says Lim.

“One might look at agribusiness and think that the women may not be treated equally as men, but there’s a danger of not looking closely enough at the specific conditions in the agricultural sector and how women’s roles play out in more rural settings.”

Where are the women leaders in palm oil?

According to a report conducted by the Food and Agricultural Organisation, 61 per cent of women in rural Indonesia work in the agricultural labour force. However, a much lower proportion of women are known to head plantations or occupy other management positions in the industry.

At Indonesian palm oil company IndoAgri for instance, only 1.3 per cent of female employees are in managerial positions even though more of them have achieved the highest levels of education. There are also no women supervisors or managers in the company, signalling that there is “little to no career path for women who work in the field,” according to RAN.

At GAR, 62-year-old Biao Ling is the only female manager in charge of the company’s palm oil concessions in Sumatra and the Bangka Belitung islands. Hailing from Padang in West Sumatra, Biao Ling has been in the industry for almost 30 years, overseeing operations from the plantations all the way to the mills, where crude palm oil is processed.

“As women, we have to be brave when facing businessmen, local officials and our superiors in the industry,” Biao Ling told Eco-Business on how she navigates working in an industry dominated by men. As head of operations, she spent most of her years traveling from one plantation to the next, solving problems between workers and monitoring every aspect of palm oil production within her concessions.

Lim says companies such as GAR have some way to go in achieving equal gender representation on their boards and on the plantations. However, she noted that more women are working on sustainability issues in the industry, such as Novianti Mandasari, an environmental engineer at GAR, who ensures waste from palm oil production is reused, reduced and recycled responsibly.

Mandasari is part of a growing number of women taking up technical positions at GAR, joining other female employees working on water issues, conducting site assessments and going into the field to check on supply chains, says Lim.

Isti Christianti, 50, heads the health category at GAR’s research and development centre in Jakarta. Having graduated with a degree in food technology, she now leads and trains new employees in the development and production of the company’s food products. According to Christianti, most of the young people entering GAR as food technologists are women.

“Honestly, it’s hard for me to find men working in food research and development,” said Christianti in an interview with Eco-Business. “We find this work attracts a lot of female talent, who I think are drawn to its detailed nature.”

Sukardi believes that companies can improve the plight of women in palm oil by introducing policies that speak of stronger commitment to women’s rights. But first, those from the highest levels of management have to understand the risks that women face in the industry before rolling out women’s empowerment programmes and female support mechanisms.

She said: “First you have to get the basics right.”

What do Indonesians really think about palm oil?

It threatens forests but builds livelihoods—the views of people in government, business and civic society on palm oil are polarised in the world's largest producing country.
What do Indonesians really think about palm oil?

[The EB Podcast] Palm oil is blamed for many environmental and social ills, from deforestation to child labour. How true are these assertions?
5 myths about palm oil

Have we overlooked the human side of palm oil production?

Recognising that environmental issues in the palm oil industry have their roots in social problems is a big step towards resolving them, say experts. Why, then, have environmental concerns overshadowed social issues in media reports and activist campaigns?
Have we overlooked the human side of palm oil production?