News The people behind palm oil

Have we overlooked the human side of palm oil production?

Recognising that environmental issues in the palm oil industry have their roots in social problems is a big step towards resolving them, say experts. Why, then, have environmental concerns overshadowed social issues in media reports and activist campaigns?

When Southeast Asia was hit by the worst haze crisis on record in 2015, Singapore’s gleaming skyscrapers were blanketed in a murky smog, schools were shut and exposure to the acrid smoke from Indonesia led to an increase in respiratory illnesses.

This was despite the fact that Singapore is separated from its neighbour by the Straits of Singapore and the South China Sea, putting a fair distance between the city-state and the lands being deforested and cleared with fire for agriculture in Sumatra and Kalimantan.

“Imagine the impact on communities living on the actual palm oil plantations, with the fires raging around them. People were blocking their doors and windows with anything that they could find,” says Anita Neville, vice president of corporate communications and sustainability relations at Singapore-headquartered palm oil company Golden Agri-Resources.

Palm oil, an ingredient commonly found in about half of supermarket products worldwide, is regularly represented by the media and campaign groups as the cause of large-scale deforestation, and depicted by images of cities enveloped in haze, forests on fire, and starving orangutans that have lost their homes.

It is generally overlooked that there are people behind this industry, and that it is their behaviour and their everyday actions that are going to help us make the industry more sustainable.

But little airtime has been given to the people working in the industry and the difficulties they face, including long working hours and the low productivity of smallholder plantations that leads to financial struggle, notes Neville.

However, this is changing. Carolyn Lim, corporate communications manager at Singapore-based palm oil company Musim Mas Group, observes that while in the past concerns about palm oil have been largely environmental, human rights organisations like Amnesty International have brought social issues to the forefront of public attention in recent years.

“The industry has now realised that solving some of these social issues is one of the keys to dealing with its environmental problems,” she shares.

Explaining the connection, Benjamin Tay, president at Singaporean green group People’s Movement to Stop Haze (PM Haze) tells Eco-Business that a lack of education and knowledge of the impacts of agricultural practices are at the heart of the environmental problems prevalent in the palm oil sector.

Communities often do not understand that environmental issues like deforestation and climate change are not only the result of their farming practices but that these issues, in turn, affect crop yields and ultimately their income and working conditions over the long term, he says.

Neville shares: “It is generally overlooked that there are people behind this industry, and that it is their behaviour and everyday actions that are going to help us make the industry more sustainable.”

One reason that social issues have flown under the radar for so long is that human rights abuses and poverty are much harder to detect and verify, observes Neville.

“It’s really easy to identify deforestation and other environmental impacts through satellite imagery or radar. Social issues, unfortunately, do not show up on satellite imagery and you cannot send a drone in to check on human conditions particularly,” she shares, adding that most social issues on plantations are underdefined and tend not to surface easily. 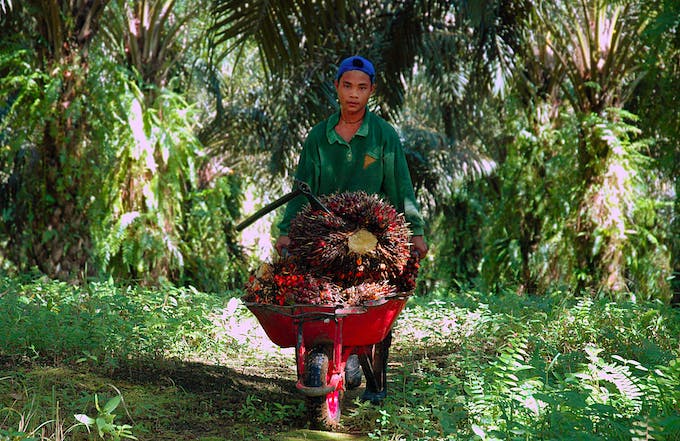 A boy collects palm fruit bunches in Indonesia. Child labour in the palm oil industry is a complex issue because it is underdefined and hard to detect and identify, and therefore difficult to address, says Anita Neville of Golden Agri-Resources. Image: ILO in Asia and the Pacific, CC BY-NC-ND 2.0 via Flickr

One example of this is child labour, which has been a persistent problem on palm oil plantations because even on the ground, it is difficult to identify.

“There is a mindset that if a child is seen on a plantation, it is automatically an indicator of exploitation but the most fundamental indicator of child labour is actually the child’s ability to attend school,” says Neville.

“When I was a kid, I helped out on my grandmother’s farm during the school holidays. Was that child labour? No one in Australia would think so; I was doing chores,” she shares.

It is because of the difficulty of identifying and measuring social issues that political leaders and institutions in Europe—where palm oil is widely criticised—are reluctant to address them, Marianne Klute, expert for Indonesia at German environmental NGO Rainforest Rescue, tells Eco-Business.

“Non-governmental organisations in Europe have highlighted that social issues and environmental impacts are related, but they are told by politicians that Europe is not in a position to interfere in Indonesia’s or Malaysia’s domestic politics,” she says.

She notes that the European Union’s proposed palm oil ban for biofuels was largely justified on environmental grounds. This is because Europe’s focus on low-carbon solutions in its energy and transportation sectors, and global issues like deforestation and climate change took precedence over social issues in Indonesia and Malaysia.

The European ban on palm oil has been under fire as critics have pointed out that the move ignored the fact that many people in Indonesia rely on palm oil for their livelihoods. In Indonesia alone, the industry provides an estimated 5.9 million jobs via direct employment and another 50 million through non-direct employment.

“Sustainability is really about changing human behaviour and practices, whether that is in the context of foreign haze, teaching people not to use fire to open up land or flick their cigarette butt out of the truck window, or in the context of work practices, understanding that children must be able to go to school,” she says.

Neville points to GAR’s efforts to address some of the social issues on plantations in recent years.

The company fortifies some of its products to help combat malnutrition and stunting among children, employs about 330 medical professionals and over 2,000 teachers that educate more than 35,000 students in schools built by the company, which is the world’s second largest palm oil firm.

“We want to make sure that communities on plantations have the best opportunities to do well. When people thrive, businesses thrive, and then we can encourage people to ensure that the planet is protected,” she says.

“As a result of the unregulated expansion of plantations, palm oil production has in some cases resulted in deforestation as well as the infringement of the rights of independent farmers and indigenous people. We are supporting endeavours to change that,” he shares.

But Klute of Rainforest Rescue says companies are not yet doing enough to tackle the myriad of social problems prevalent in the sector, particularly the large-scale acquisition of land for oil palm plantations by companies or individuals.

“I do not think that palm oil works as a poverty reduction tool,” she tells Eco-Business. “What I see is that the people in forested areas are becoming impoverished, losing their land and livelihoods.”

Klute adds: “While the largest plantation companies make good profits, wages in the sector are minimal and often do not cover living expenses.”

To push back against land grabbing and other social issues, there must be support for independent smallholders, who produce about 40 per cent of the world’s palm oil but often do not have access to good quality seeds, fertiliser and knowledge about better agricultural practices, shares Neville.

She adds that many industry players are now also coming together to look at implementing living wage standards as part of ongoing efforts to improve sustainability and living conditions in communities.

Another way to support smallholder farmers and communities is to expand their access to financing so they can farm better, says Lim of Musim Mas. And better farming means more productive farming.

If you increase the productivity per unit of land, you can also tackle the issue of deforestation, she shares.

What do Indonesians really think about palm oil?

It threatens forests but builds livelihoods—the views of people in government, business and civic society on palm oil are polarised in the world's largest producing country.
What do Indonesians really think about palm oil?

Mounting attention on women’s rights violations in the palm oil industry have pushed women workers out of the shadows, forcing companies to step up and improve the welfare of their female workforce.
Women in palm oil: invisible no more?

[The EB Podcast] Palm oil is blamed for many environmental and social ills, from deforestation to child labour. How true are these assertions?
5 myths about palm oil