Wins and losses of COP26

Negotiators in Glasgow found some common ground and managed to strike a climate deal after two weeks of intense talks, but the world remains far from limiting warming. Here is a snapshot of the wins and losses at COP26.

The goal of preventing a harrowing rise in global temperatures and limiting warming to 1.5 degrees Celsius is still within reach but “its pulse is weak”, said COP26 president Alok Sharma in the closing plenary session on Saturday.

Speaking at the end of 14 days of negotiations that went deep into overtime in Glasgow on Saturday, Sharma, looking visibly emotional, described the latest climate pact that the world has struck as a “fragile win” and called on all nations to keep at updating their climate plans.

“We will only survive if we keep our promises,” said Sharma, fighting back tears. As he addressed the delegates at the final conference of the landmark summit, Sharma apologised for how the gathering had concluded with frustration over last-minute changes in the wording of the deal. “I am deeply sorry,” he said.

Compromises and last-minute interventions have always been unavoidable characteristics of important multilateral deals, but when it comes to the existential problem of climate change, leaders know that more urgency is needed and that time is of the essence. The COP26 deal, though imperfect, has scored a few wins and established a consensus to hold countries accountable for the progress they make in advancing their climate goals, said Sharma.

“If it’s been a good negotiation, all the parties are uncomfortable. And this has been, I think, a good negotiation,” United States climate envoy John Kerry told journalists, summing up the mood among the diplomats and leaders post-COP26.

Here is a rundown of the Glasgow climate pact’s wins and losses.

The decision text of COP26 was supposed to deliver a breakthrough agreement among world leaders on fossil fuels, and called on parties to “accelerate the phasing-out of coal and subsidies for fossil fuels”. But last-minute haggling by India, backed by China, resulted in a resolute pledge of a complete coal phase-out being watered down to a gauzy promise to “phasing down” coal power.

Observers at the climate summit said that the inclusion is still significant as the final text contains the first ever reference to fossil fuels in a quarter century of COP summits. Nevertheless, fossil fuel lobbyists were successful in ensuring the inclusion of the word “inefficient” before “subsidies for fossil fuels”. Fossil fuel support currently runs into hundreds of billions of dollars a year, from electricity cost relief to tax breaks for oil and gas firms. The new pledge goes further than the G20 has to date and sends a clear signal that the world will move faster to consign coal to history.

“They changed a word but they can’t change the signal coming out of this COP, that the era of coal is ending. If you’re a coal company executive, this COP saw a bad outcome,” said Jennifer Morgan, executive director of Greenpeace International, despite describing the final text as “meek and weak”.

At the summit, more than 100 countries also agreed to slash methane emissions by 30 per cent by 2030. For the first time, the climate pact now features a reference to methane which is a potent greenhouse gas.

The Glasgow talks sealed six years of negotiations on global carbon markets, after diplomats came to a resolution on Article 6 of the Paris Agreement, to establish an accounting framework for the trading of emissions credits that will help countries hit their decarbonisation targets. Moving forward, a country that has surpassed its climate target can tally up the emissions it has prevented, for example, and sell them to a country that’s falling behind.

This was previously the only outstanding issue that parties had yet to form a consensus on from the Paris Agreement. There is now increasing pressure to pin down clearer rules, in a bid to better regulate voluntary markets for offsets before they turn into a messy and fragmented sprawl.

Singapore, facilitating the negotiations alongside Norway, described the result as a “big win for the multilateral approach to addressing climate change”.

“Going into COP26, all of us knew that coming to a resolution on Article 6 was one of the main goals. As the last outstanding item under the Paris Rulebook, it would have laid out common rules for carbon markets, and set us on the way to global climate action,” said Grace Fu, who leads Singapore’s Ministry for Sustainability and the Environment.

Singapore is driving forward plans to become a global carbon services and trading hub. It has announced that it is scaling up efforts to develop an international carbon trading marketplace and a services ecosystem to support decarbonisation.

By some estimates, the carbon trading market could be worth US$100 billion. The COP26 decision creates unified and internationally controlled standards, and includes provisions to avoid a situation where the same emissions reductions are claimed by multiple companies or countries.

Environmental groups said that the proposed framework for a global carbon market is markedly better than previous versions, though there remain loopholes. Many vulnerable countries argue that such mechanisms end up being a way for big polluters to stall and greenwash instead of making emission cuts.

There are also concerns that a compromise in the rules will allow millions of old, poorer quality credits created under the Kyoto protocol to be brought into the new system.

One of the biggest fights at the summit in Glasgow revolved around whether the world’s wealthiest nations, which are disproportionately responsible for global warming to date, should funnel money to poorer island nations for the damages caused by rising temperatures.

The Glasgow agreement urges developed countries “to provide enhanced and additional support for activities addressing loss and damage associated with the adverse effects of climate change”, though it stops short of providing a clear solution. There is no funding mechanism in place and contributions to loss and damage are voluntary for now. 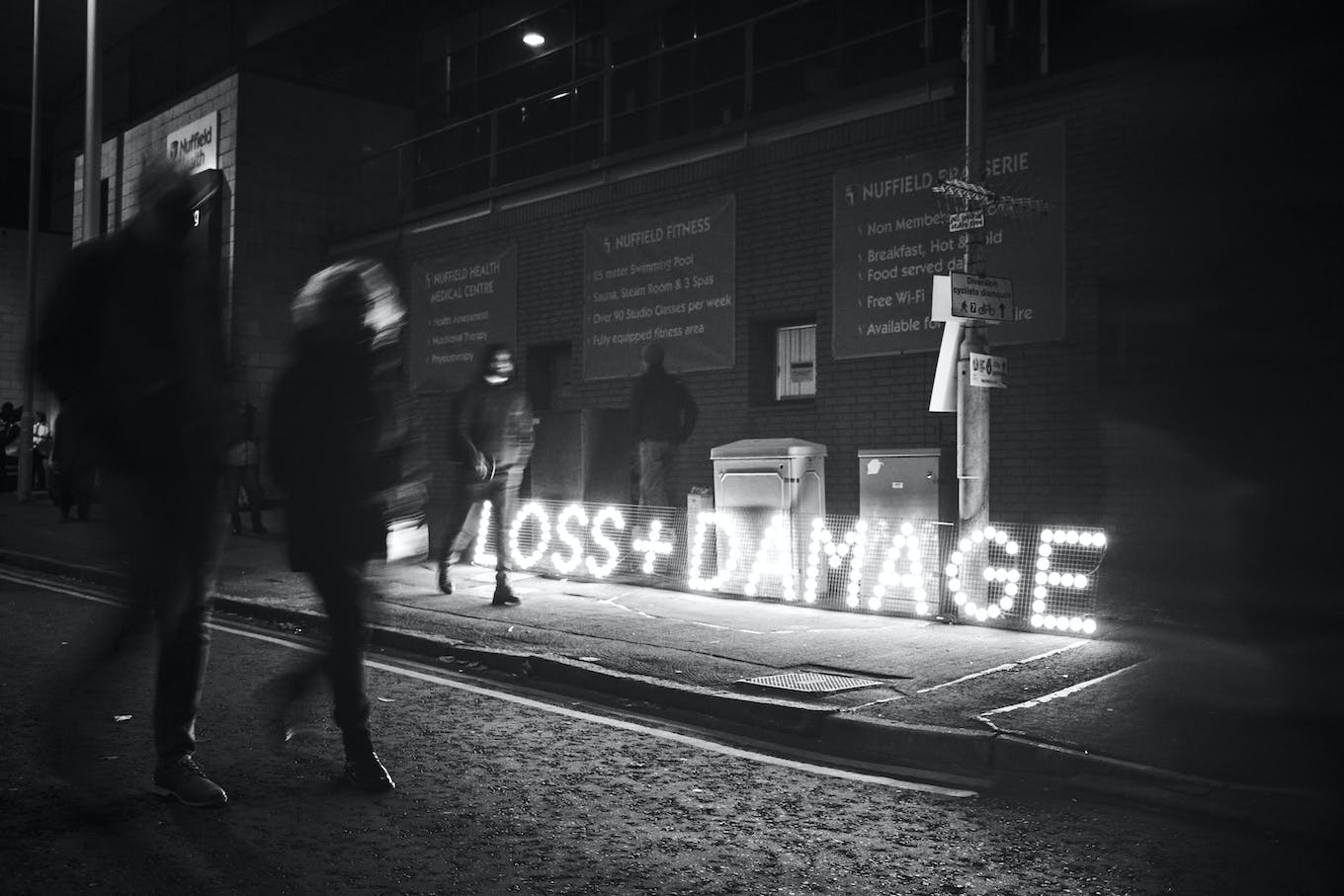 Climate campaigners held a “vigil” outside the main COP26 conference venue for those experiencing the most severe impacts of climate change. Image: Fraser Morton / Eco-Business

At the same time, vulnerable countries are asking for developed countries to significantly scale up provision of adaptation finance. The Glasgow pact includes an urgent call to do so, and states that the sum should minimally be doubled from 2019 levels by 2025.

According to the United Nations (UN), the amounts pledged remain far below the annual US$70 billion developing countries are estimated to need; this amount could rise to US$300 billion by 2030.

Much has been said about Chinese president Xi Jinping’s absence from the COP26 summit, but that didn’t stop the world’s largest greenhouse gas emitter from making an impact on the climate negotiation process.

Many think that a surprise deal between China and the United States was what helped avert a total COP26 collapse. An old friendship between veteran climate negotiator Xie Zhenhua, who was representing China in the COP26 talks, and America’s climate envoy John Kerry, was said to have helped drive the deal.

In a joint statement, the two countries expressed alarm that efforts to reduce emissions are falling short of what is required to stop warming from exceeding 2°C and stressed the vital importance of closing the gap as soon as possible, particularly through stepped-up efforts.

“The joint statement helped to calm down the temperature in the rooms of COP26,” said Li Shuo, senior global policy advisor at Greenpeace East Asia. Li said that the US and China cannot afford to decouple or disengage on the issue of climate change and the deal helps to move things forward, though it is “far from saving the planet”.

A huge gap remains to keep alive the Paris Agreement’s goal of limiting global warming to 1.5°C from pre-industrial levels.

According to the think tank, International Energy Agency (IEA), if all the pledges made at COP26 come to pass, it will leave the world on course to warm by 1.8°C by the end of the century. It is a big “if”, especially when some of the pledges have not been backed up by concrete plans.

A study by Climate Action Tracker predicts a more dire rise of 2.4°C by the end of the century, using a climate prediction model based on current national pledges to rein in greenhouse gas emissions.

UN chief Antonio Guterres said on Saturday that the world was still “knocking on the door of climate catastrophe” and that the package from COP26 is far from solid. As part of the climate pact, nations are now requested to revisit and strengthen their 2030 climate targets to align with the Paris Agreement temperature goal by the end of next year.