Bongbong Marcos, son of the country’s late dictator, is on the cusp of reclaiming power for his disgraced family. Eco-Business speaks with experts about how this impacts clean energy, climate justice, and corporate responsibility.

By Hannah Alcoseba Fernandez and Ping Manongdo
6 minute read May 11, 2022

With nearly all of the votes already accounted for, Ferdinand “Bongbong” Marcos Jr., only son of the late Philippine dictator, is the presumptive winner of the 2022 presidential elections.

Marcos has kept his lead with over 30 million votes, while his closest rival, incumbent vice president Leni Robredo trailing with only about half his tally, as of noon today, bringing the Marcos family inches away from the Malacañang Palace, 36 years after they were thrown out of it by a mass uprising.

His father and namesake ruled with an iron fist for nearly two decades until 1986, an era noted for widespread poverty, unemployment and a debt crisis. Unrestrained arrests, disappearances and alleged torture during his term provoked a revolution, which forced him and his family to flee to Hawaii, where the strongman died in 1989.

Today, the younger Marcos is on the verge of replacing outgoing President Rodrigo Duterte and reclaim the presidency for the Marcos dynasty.

But there is very little the public knows about his platform, much less on his stand on sustainable development issues, as he has shunned mainstream media, including public debates and forums—believed by analysts to be a ploy to avoid answering long-standing issues like plunder, feared to jeopardise his comfortable lead in pre-election polls.

With insights from experts in the field, Eco-Business shines a light on what a Marcos regime could mean for sustainable development in the archipelagic country of 110 million people.

The recent declaration of the Philippine Commission on Human Rights, that there are legal grounds to hold the world’s biggest fossil fuel companies liable for climate disasters, is one issue that environmentalists have been hoping the next president would use as basis for seeking climate justice.

Early in his campaign, Marcos turned to social media to call for collective action on climate change, as well proclamations to protect the environment to safeguard the most vulnerable from calamities, but it comes with scant detail and an unclear platform.

Casting doubts aside, if there is one sustainable development issue that Marcos is likely to address it will be climate justice, said Tony La Viña, former climate change lead negotiator and environmental lawyer.

To be honest, all presidents have had problems with development aggression. I don’t think Marcos will be worse than any of them.

“One positive thing about Marcos is that he seems to understand the need to prioritise the climate change agenda,” La Viña told Eco-Business, citing how the province of Ilocos, Marcos’ bailiwick, is home to the largest wind power project in Southeast Asia and a planned 100 megawatt solar plant.

But before Marcos can address climate justice from big polluters, La Viña said he will first be facing issues of “development agression” on the homefront, referring to development projects that violate the human rights of affected communities.

The veteran environmental professor cited the Kaliwa Dam to be Marcos’ “biggest problem”, as the project has been criticised for boosting Manila’s dwindling water supply at the expense of the ecosystem and home for indigenous people living in the surrounding area.

“To be honest, all presidents have had problems with development aggression. I don’t think Marcos will be worse than any of them,” he said. 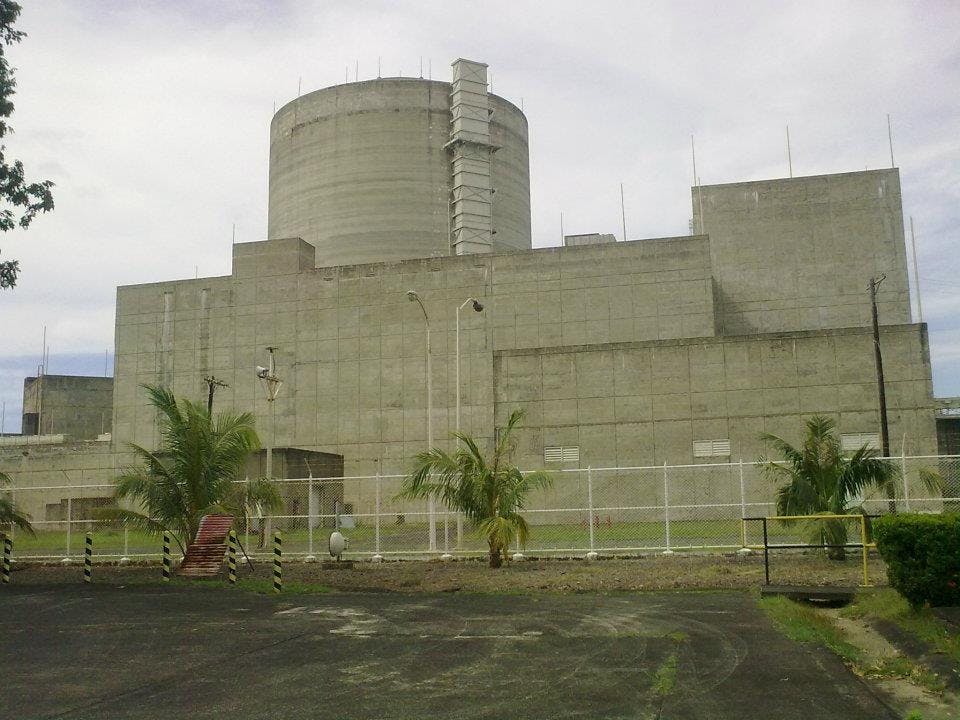 The Bataan Nuclear Power Plant in the Philippines. The power plant cost over US$2.3 billion but never went into operation. Image: Jiru27, CC BY-SA 3.0 via Wikipedia Commons

Marcos has said that he will support renewable energy if elected, but he also has plans to revisit the shelved Bataan Nuclear Power Plant (BNPP), which was built during the presidency of his father.

Critics have protested that tapping nuclear energy is “dangerous and unnecessary”.

“This is alarming because the climate crisis and the pitiable plight of power consumers require concrete plans and decisive action to transform energy and all carbon-intensive sectors.”

Nuclear power is touted as a possible solution to the country’s energy supply, which is vulnerable to seasonal outages. The country’s electricity prices are among the highest in Southeast Asia.

Constructed in 1976 in response to an energy crisis, and completed in 1984, the government suspended it two years later following Marcos’ ousting and the deadly Chernobyl nuclear disaster in Ukraine.

With the shadow of the plunder and corruption of his late father’s rule cast over him, observers fear that a Marcos presidency will hinder the growth of corporate responsibility in the Philippines. This holds true especially for companies which deal with government procurement, doing so without transparency and due diligence checks as in the case of the notorious Pharmally Pharmaceutical Corporation, a corruption scandal that involved funds needed to fight the pandemic.

Dr Dynah Avigal Basuil, executive director and professor at Asian Institute of Management Ramon V. Del Rosario, Sr Centre for Corporate Responsibility, said that while there is no clear information about what Marcos wants to do in this space, more consumers, employees, and investors, and both local and international buyers of Philippine products and services, are casting a critical eye on corporate behavior.

I think if the election went the other way, with [political opponent, Leni] Robredo winning, we could have had such massive upside potential. But are we going to rely on the new administration to stop us from also improving corporate governance? I don’t think so.

“The experience from Bongbong’s father was different. People were less informed, they had less avenues to raise their voices. Before, the government had more leverage compared to businesses. The conditions have changed a lot. I hope that the behaviour of Bongbong and his administration will be responsive to these changes,” Basuil told Eco-Business.

Buyers of Filipino products and services abroad have expectations, such as refusing to accept child or forced labour and engaging with companies throwing waste into the environment, Basuil noted.

“It’s not just about the government anymore, it’s about the buyers, the employees, the investors. When they bring that kind of leverage to companies, it makes a difference,” she said.

“I think if the election went the other way, with [political opponent, Leni] Robredo winning, we could have had such massive upside potential. But are we going to rely on the new administration to stop us from also improving corporate governance? I don’t think so. We’ve realised that we do have some power in this, we do have a choice to make.”

Marcos has been vocal about his intention to create more post-pandemic jobs through his predecessor’s infrastructure programme called “Build Build Build”, which is funded mostly by loans and investment pledges from China as it complements the super power’s monster infrastructure plan, the Belt and Road Initiative (BRI).

Amid criticism over the administration favouring Chinese policy over his own country’s, activists are questioning the environmental impacts of the BRI’s network of roads, railways and pipelines, which have been found to displace communities.

“There will be a lot of pushback against that. He cannot sacrifice the environment for economic progress. Jobs might be there but only for a while, but if a project does not destroy biodiversity, jobs to maintain the ecosystem will be there for a long time,” La Viña said.