Days before the national elections, activists urge the incoming government to use the decision on the world’s first national enquiry framing climate change as a human rights issue, as basis for seeking climate justice from big polluters.

The Philippines’ Commission on Human Rights (CHR) released on Friday its report on the world’s first national enquiry on climate change, revealing that there are legal grounds to hold climate-destroying corporations, known as carbon majors, liable for climate disasters.

The carbon majors knowingly contributed to the root causes of climate change and violated the human rights of Filipinos, said the report presented to the media by former CHR commissioner Roberto Cadiz, who led the enquiry that started in 2018.

The report concluded a four-year investigation by the CHR with a landmark resolution that 47 fossil fuel companies, including energy giants Shell, Chevron, ExxonMobil, Total, and BP, contributed to 21.4 per cent of global emissions.

The enquiry was propelled by a petition filed in 2015 by Filipino typhoon survivors for the Commission to investigate the role that the fossil fuel firms played in contributing to natural disasters such as syper-typhoon Haiyan, which devastated the Philippines in 2013 and left more than 6,300 dead. 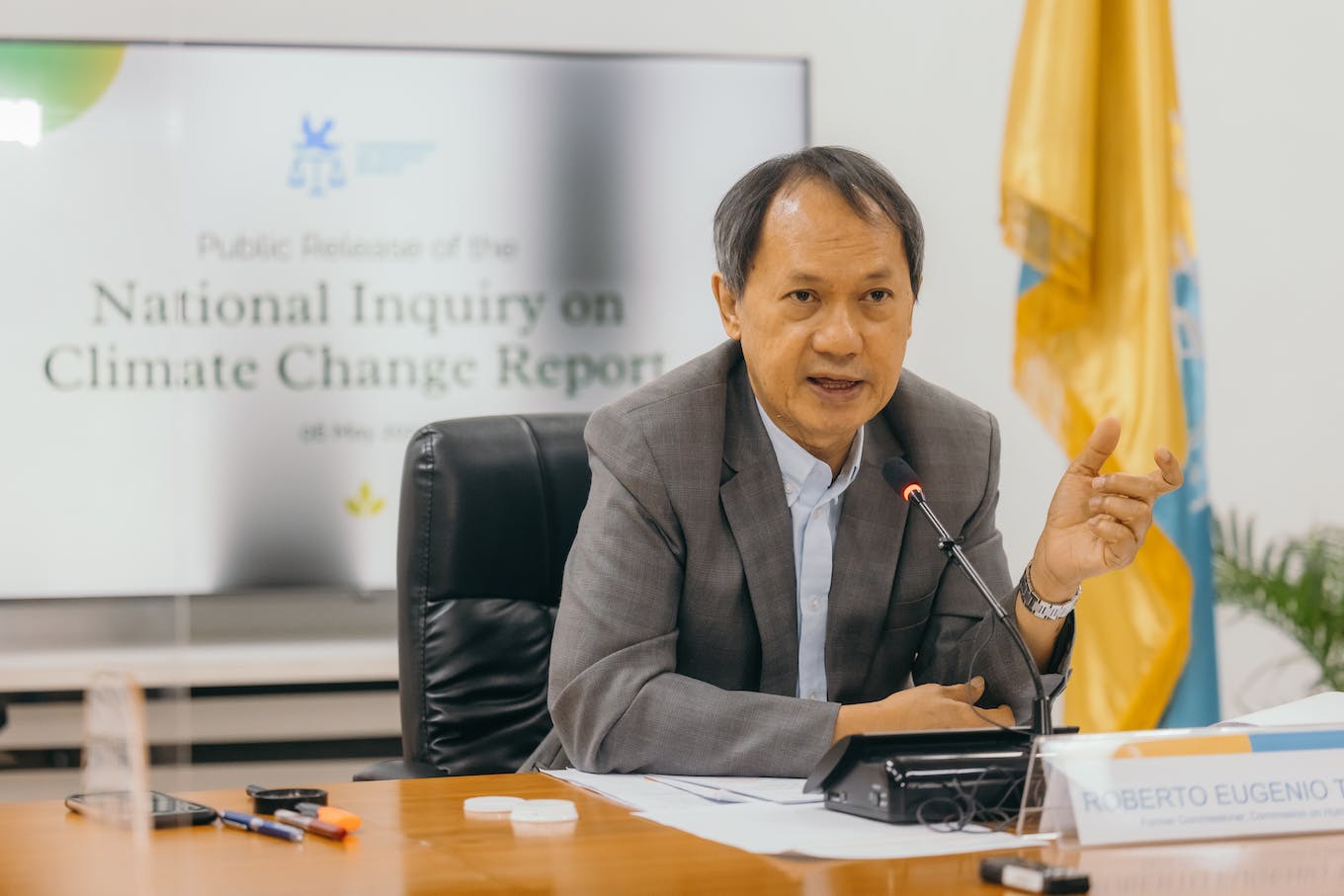 Former CHR commisioner Roberto Cadiz presenting the commission’s report to the media. Cadiz
leaves the agency with this landmark case as his term expired on 5 May. Image: Greenpeace

The decision comes three days before Filipinos elect a new president, as well as more than 18,000 national and local positions, prompting environmentalists to urge the incoming government to prioritise climate and environmental justice.

“We are calling on the incoming Philippine government leaders and world leaders to adopt the Commission’s findings and hold big polluters responsible for the climate-damaging impacts of their business activities,” said Virginia Llorin, a campaigner for environmental group Greenpeace. “Act on these findings and issue policies that will not only hold climate-polluting businesses accountable and prevent further harm, but will also ensure a just future for the people.”

Llorin also called for the next government to push rich countries to pursue more ambitious emissions reductions targets, more money for climate finance, and compensation for loss and damage.

“This report will not resolve climate change, but this is one step towards holding corporations responsible for the worsening [climate] crisis, which leads to human rights violations. It’s now or never,” she said.

This report will not resolve climate change, but this is one step towards holding corporations responsible for the worsening [climate] crisis, which leads to human rights violations. It’s now or never.

Even before the resolution, the CHR’s jurisdiction on the case has already been questioned by the accused firms, citing that the issues raised by the organisation are outside its mandate.

The CHR cannot prosecute or file cases itself as it is an investigatory body under the Philippine Constitution.

Environmental lawyer and former department of environment and natural resources undersecretary Tony La Viña said that although the commission’s decision is “not legally binding and at best has only moral and political significance”, it could lead to next steps that could have legal implications.

“The findings in the investigation could be used to determine civil liability in a civil action for loss and damage arising from climate change—whether that action is filed here [in the Philippines] or in another jurisdiction or even with an international tribunal,” Lavina told Eco-Business.

“On being a precedent, it’s a good template for other developing counties to follow and could have moral, political and potentially legal value to hold polluters to account.”

The real challenge will be bringing these cases to the courts and proving liability based on proof beyond reasonable doubt that these fossil fuel companies are legally and morally liable for climate impacts on Filipinos.

The 47 companies are not headquartered in the Philippines, although there are some like Shell, Chevron, and Total that have legal presence in the country.

As such, the most that can be done would be for Philippine legal authorities like the department of justice and the solicitor general to file any case against them, said environmental lawyer Gregorio Bueta.

“The real challenge will be bringing these cases to the courts and proving liability based on proof beyond reasonable doubt that these fossil fuel companies are legally and morally liable for climate impacts on Filipinos,” said Bueta, professor of environment and natural resources at the Ateneo de Manila University School of Law.

“But this is a significant decision, one that strengthens the human rights and environmental and climate justice nexus. Hopefully it inspires other human rights institutions to take action.”