Waste solutions can curb 84% of global trash emissions, but nations are neglecting waste in climate plans

Based on eight cities worldwide, an air quality watchdog found that composting and segregation may cut harmful gases from the waste sector equivalent to taking all cars off the road in the United States for one year.

Waste reduction solutions like segregation, composting and recycling could cut waste sector emissions by an average of 84 per cent, or more than 1.4 billion tonnes of carbon dioxide, which is equivalent to taking all motor vehicles off the road in the United States for one year, a report by an anti-waste burning advocacy group finds.

Methane, the second most potent climate agitant after carbon dioxide, is estimated to be responsible for 23 per cent of all heating caused by greenhouse gases. Reforming the waste sector could cut global methane emissions by 13 per cent globally, it read. 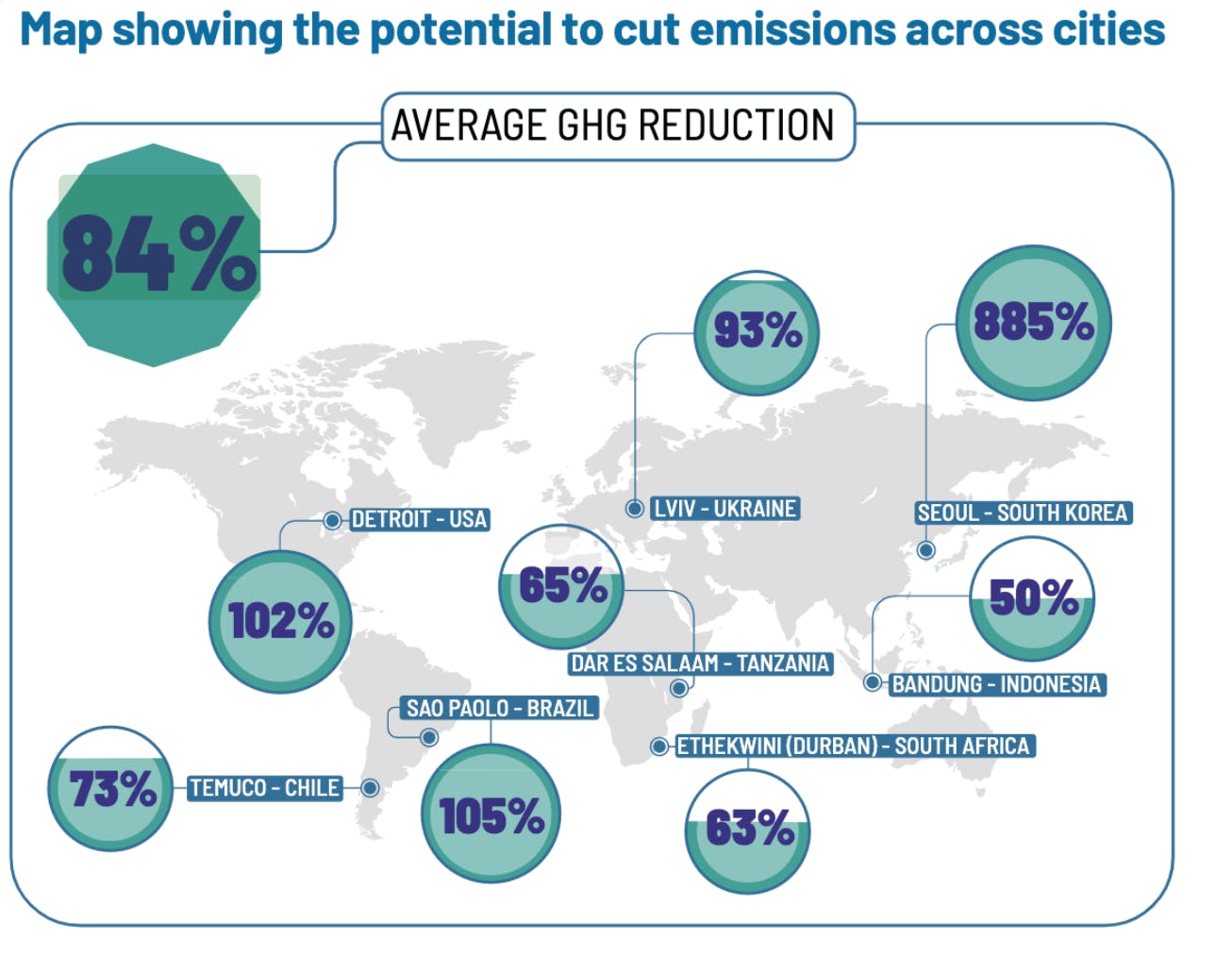 Seoul already diverts 96 per cent of its organic waste by source separation where each type of trash is disposed using separate bins or through direct delivery of specific waste types to drop-off facilities. South Korea’s most populous city has “aggressive” methods of separate collection and treatment of organic waste and recycling programmes which can reduce harmful gases, setting it on course to achieve net negative emissions by the end of the decade.

In the past thirty years, its government has mandated households and shops to purchase only designated trash bags. The public is given more incentive to generate less waste because they are asked to pay for waste treatment according to how much they generate.

There is also a free collection mechanism for recyclable waste, encouraging locals to be more active in waste separation and recycling.

However, South Korea’s waste programme is marred by its reliance on incineration, which produces double the volume of greenhouse gases as replacement sources of energy, according to the report.

The east Asian country has also been called out for dumping its garbage on its neighbours. In 2019, the Philippines shipped back 6,500 tonnes of mixed waste to Korea which had been misdeclared as plastic flakes and did not have proper importation permits.

If incineration and illegal waste exportation are phased out, the city could save over 885 per cent of annual emissions by 2030, which is equivalent to the annual emissions from 1.4 natural gas-fired power plants, Arkin added.

Bandung, Indonesia was cited for being the only city analysed which had an action plan to reduce food waste as part of its zero waste model, allowing it to potentially cut its waste emissions by half in seven years.

Its food waste prevention programme collects bruised, unpalatable but still edible food and processes it into pickles and sauces for human consumption. This scheme is critical given that the majority of Bandung’s emissions from the waste sector come from landfilled organic waste, said Arkin.

Most of these emissions reductions occur in the production and transportation of food even before it reaches consumers, which points to gross inefficiencies in food systems.

Elsewhere, GAIA analysis showed that the city of Detroit in United States and the Ukrainian city of Lviv could lower their waste sector emissions by as much as 102 per cent and 93 per cent, respectively, if they are able to divert organic waste from landfills—their biggest source of methane.

The Russian war in Ukraine made the city of Lviv a major shelter for refugees and hub for humanitarian aid, adding an enormous amount to its waste footprint. But if it continues measures instituted right before the war such as diverting the majority of its organic trash from landfills and pioneering an effort to replace sanitary products, such as diapers and menstrual products, with reusable equivalents, it could improve its emissions dramatically, said the report.

Dar Es Salaam (Tanzania) and Durban (South Africa), which already have efficient informal recycling sectors can each lower harmful gases by more than 60 per cent by introducing waste reduction solutions. Temuco, a remote Chilean city inhabited by mostly indigenous groups, does not have a separate collection system for its recyclables or organic materials, but it has the potential to slash its emissions by 73 per cent by taking the zero waste approach.

Including the waste issue in climate pledges

Despite these findings, more than a quarter of countries’ current climate plans neglect the waste sector, said the report.

Waste management will be a key topic of discussion at the 2022 United Nations Climate Change Conference (COP 27) in November, where host nation Egypt plans to put forward the Africa Waste 50 Initiative, aimed at treating and recycling half of the waste produced in Africa by 2050.

The UN Environmental Assembly (UNEA), also to be held next month, will reconvene in Uruguay to negotiate the world’s first ever treaty on plastic pollution.

“Previous climate talks have largely overlooked the potential of reforms to the waste sector, particularly for reducing methane, which over 100 countries have now pledged to do. Zero waste strategies are the easiest way to rapidly and cheaply bring down emissions, while building climate resilience, creating jobs, and promoting thriving local economies,” said Mariel Vilella, co-author of the report and director of GAIA’s global climate programme.

Vilella added: “As we prepare for another round of UN climate negotiations, we have a unique opportunity to put waste firmly on the agenda. Without concrete commitment from global leaders to zero waste, we will not be able to meet the 1.5° C climate target.”

The COP27 negotiations have already courted controversy by being sponsored by Coca-Cola, a fizzy drinks brand that is routinely ranked as the world’s biggest plastic polluter.