Youth should be involved in policy decisions that will dramatically impact their lives, says this 18-year-old climate activist. In this interview, she shares about the biggest environmental issues facing New Zealand, and what she’s doing to tackle them.

At just 18 years old, Rhiannon Mackie is a prominent climate champion in her country. Since 2019, she’s organised climate protests across New Zealand, campaigned for the government to divest from fossil fuels in schools, and most recently, took part in the United Nations Stockholm+50 meeting in Sweden as a youth delegate.

Born and raised in the city of Lower Hutt, in the Wellington region of New Zealand, Mackie says she grew up close to nature. She was never more than ten minutes away from a forest or beach, and regularly went on hikes and swam in the ocean. This proximity shaped her sense of identity and her relationship with the natural environment.

“Living in New Zealand, there’s an inherent connection to nature because of how close it is to our day-to-day lives,” Mackie said.

Her parents played a pivotal role in helping her to further that connection. They often encouraged her to take part in ad-hoc environmental events such as tree planting and wetland restoration projects.

But Mackie says her understanding of the environment remained at a very “basic” level for most of her life. It was only when she was 12-years-old that the scale of the climate crisis began to dawn on her.

“I don’t really remember what sparked that, but I remember reading articles about climate change and just being absolutely shocked at the fact that this was such a big problem, yet we weren’t hearing anything about it,” said Mackie. “It was a complete shift in my understanding of the world.”

She began to get more politically engaged to try and influence climate policy—first within Wellington, then nationally, and later in the international sphere with the United Nations Environment Programme’s official youth constituency. Now a senior at Hutt Valley High School, Mackie has over four years of activism experience under her belt.

In this interview with Eco-Business, Mackie shares about some of the biggest environmental issues facing New Zealand and what young people are doing to tackle them.

How did you get involved in climate work?

In 2019, the school strike for climate movement came to New Zealand for the first time, and I remember really wanting to be a part of it. Not just to show up as a participant, but to really put my energy into it and join and help out, more than just for a day. 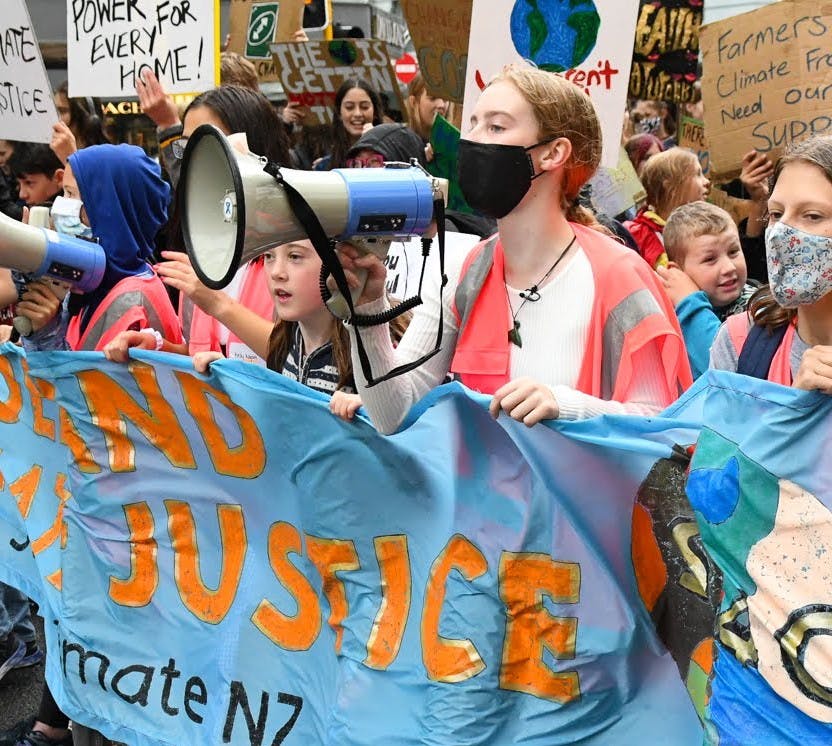 I got involved in the organising team of School Strike 4 Climate NZ, and later marched on the frontlines of the protest. The 2019 strikes were the first time in my memory that we had so many people from all across the country coming together to fight for the same thing. Climate change went from being a non-issue to being on the political agenda across the spectrum. I was fourteen then, and that experience taught me so much about the power of youth and how to use my voice.

A couple of years ago, I also helped to lead the Fossil Free Schools Campaign in New Zealand. Over a thousand schools are using fossil fuels to heat their classrooms. So many are using coal, particularly in lower-income areas. Coal isn’t just an issue in terms of carbon emissions; it’s also a major health issue.

For that campaign, I basically led the process to bring youth voices to the forefront. For example, doing media articles and setting up groups across the country for young people to engage in their own communities. Recently we’ve seen a commitment to phase out all coal boilers in schools by 2030, and I think young people being involved really gave the campaign the power it needed to go nationwide.

What are some of the biggest environmental challenges facing New Zealand?

One of the biggest issues is water pollution. We’re a big agricultural country and a lot of our agriculture is next to waterways, so all the runoff goes straight into rivers and lakes.

New Zealand also has a massive carbon footprint for a country of our size. We have one of the highest carbon footprints per capita in the world, and it’s going up rather than down, despite all the new climate legislation and despite the lockdowns in 2020.

Many of these issues were unlegislated for a long time and we’re only now starting to see policy changes. The fact that it’s taken so long to get to this point… it’s an indicator that there isn’t enough weight given to the climate crisis, right up to the highest levels of government. In fact, the latest plan about the carbon budget just contains general proposals. It’s lacking in any details about how, when, or what.

We also see some very tokenistic representation of young people in climate spaces—they consult with only three to four youths and then say they’ve consulted an entire generation. But this approach doesn’t take into account socioeconomic or regional differences. We need to see more meaningful engagement.

I would love to see some ambitious, concrete policy that actually takes steps to reduce emissions. And in a way that engages with the public, particularly with young people.

Activism sounds like a full-time job for you, but in reality you’re also still a high school student. How do you juggle so many commitments?

It’s really about focusing on what I’ve committed to. Sometimes I wake up at 2 or 3am and have a couple of Zoom calls for international campaigns, and then go back to sleep before school. In the day, I might leave classes halfway for meetings in Wellington with different politicians, or do more Zoom calls for meetings and interviews. After school, I head home to catch up on any school work I may have missed, then start preparing for the next day’s meetings.

Another key thing for me is being able to pass opportunities that I’ve been given on to others. This makes sure that not everything is on me, and also that other people are getting the same opportunities that I’ve been given. The environmental movement has a very real issue around the “celebrity activist” ideal, so I’m really careful because I don’t want to become someone who’s not giving spaces to others.

How has your school responded to your activism?

There was definitely a lot of uncertainty at the start. For the climate strike in 2019, the school was very against anyone showing up to it. Then a week before it happened, some newspapers in the Wellington region featured me in an interview about youth activism. The school later decided that students could go for the strike; it wasn’t going to be the end of the world.

Over time, as I got more involved in the environmental movement, the school started to see that it wasn’t a negative thing and that it was actually making an impact. A lot of the legislation passed in New Zealand’s parliament was due to public pressure from actions like the school strike. Those changes gave the work that I was doing much more legitimacy.

What would you say to those who feel that young people “don’t know enough” to drive change?

Experience is what matters over age. Our young people have experience. We have lived experience of growing up on this planet at a time where the climate crisis is already here. That is not an experience that previous generations have had, at least not to the scale of the crisis today.

We know the policy we need: keep fossil fuels in the ground. It’s that simple. From there, it’s about: how do we change the system such that we don’t need fossil fuels? That is not something that we as a society—regardless of age—have experience in. But young people are the future. We have the right to have a say in what the future will hold, the right to be involved in policy decisions that will dramatically impact our lives. Those decisions are happening right now — not in 10 years or 20 years when we have “experience” or are the “right age”.

Her study of a massive shellfish that can grow up to a metre long earned her the nickname ‘Giant Clam Girl’. On World Oceans Day, the Singapore researcher shares more about how she juggles fieldwork, mentorship, advocacy and family duties.
24 hours with... marine ecologist Neo Mei Lin