It is the first major bank in Asia to turn away from oil and gas, although loans to the sector make up less than 5 per cent of its total loans, and funding for existing projects will continue.

Southeast Asia’s third largest lender United Overseas Bank (UOB) laid out its interim and 2050 decarbonisation targets for six top polluting sectors on Monday. Among its wider commitments, it pledged to stop financing upstream oil and gas projects approved for development after 2022, the first bank in Asia to do so.

Net-zero targets for five other sectors, including power, automotive, real estate, construction and steel, were unveiled. The six sectors make up 60 per cent of the bank’s corporate lending portfolio, and are seen as critical to emissions reduction.

Speaking at a press conference held on the same day of the announcement, Eric Lim, UOB’s chief sustainability officer, said that its commitment with regards to the oil and gas sector is in line with calls from international bodies such as the United Nations-backed Intergovernmental Panel on Climate Change (IPCC) and the International Energy Agency, that the world cease development of new fossil fuel resources.

The bank, which said in 2019 that it had stopped funding coal-fired power plants, now also commits to extend this to the entire thermal coal sector by 2039 – the same year that rival DBS Bank pledged to be coal-free in a declaration made last year. It now already has in place prohibitions on new project financing of greenfield or expansion of coal-fired power plants and thermal coal mines.

Elaborating on the bank’s decision to cease immediate funding for new upstream oil and gas projects, a rare one in Asia as many financial institutions in the region continue to back gas development, Lim said that research conducted showed wide variance in net-zero aligned pathways for the sector. In Malaysia, for example, there are pathways suggesting a reduction of financing by 39 per cent, while other pathways indicate a need to increase oil and gas financing by as much as 59 per cent, and all these were globally-accepted pathways.

“What that told us was, within the region, we have not, as a collective community, figured out the most effective way towards transitioning out of oil and gas in a way that countries can execute,” he said.

UOB, hence, has decided that it would “make the strongest commitment it knows how to make, which is that of limiting new supply,” said Lim, adding that the bank will continue to work with regional and national stakeholders to figure out “the right oil and gas pathways” that can truly support decarbonisation.

UOB did not disclose additional statistics on the status of its portfolios for coal, oil and gas, as well as renewables, when probed, though Lim highlights a metric for avoided greenhouse gas emissions that the bank looks at, which reflects how its solar financing portfolio has contributed to emissions reductions.

“The pace at which sustainable financing is growing compared to financing of activities of the old economy is also growing, multiple times faster,” he said. 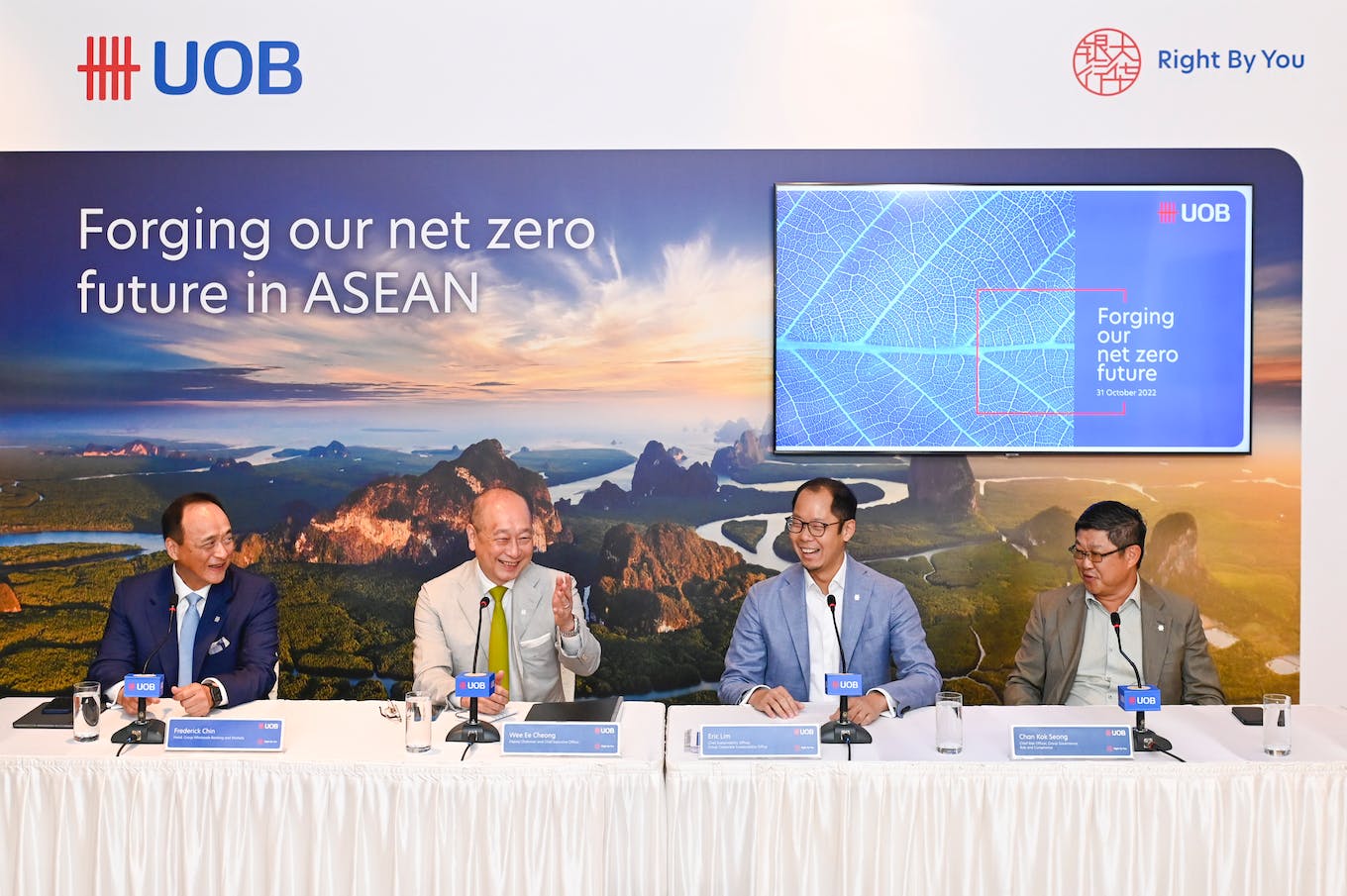 UOB is the second bank in the region to set out emission targets to meet its net-zero commitments by 2050 after DBS made a similar announcement last month. The pledges reflect how financial institutions in Southeast Asia are pushing ahead with decarbonisation goals, despite weakened resolve among the world’s biggest banks to commit to a net-zero future.

According to reports, major banks including JPMorgan Chase & Co. and Morgan Stanley are considering leaving the Glasgow Financial Alliance for Net Zero (GFANZ), a coalition of about 500 financial sector entities. The moves have been characterised by the media as banks “quiet quitting” on net zero, as misgivings towards strict legal requirements increase, and institutions worry that they may have jumped on the bandwagon too soon, especially as oil and gas are experiencing a market resurgence.

For UOB, it has laid out targets to reduce emissions intensity across the energy and built environment ecosystems by between 20 and 61 per cent by 2030, and 85 and 100 per cent by 2050, against a 2021 baseline. 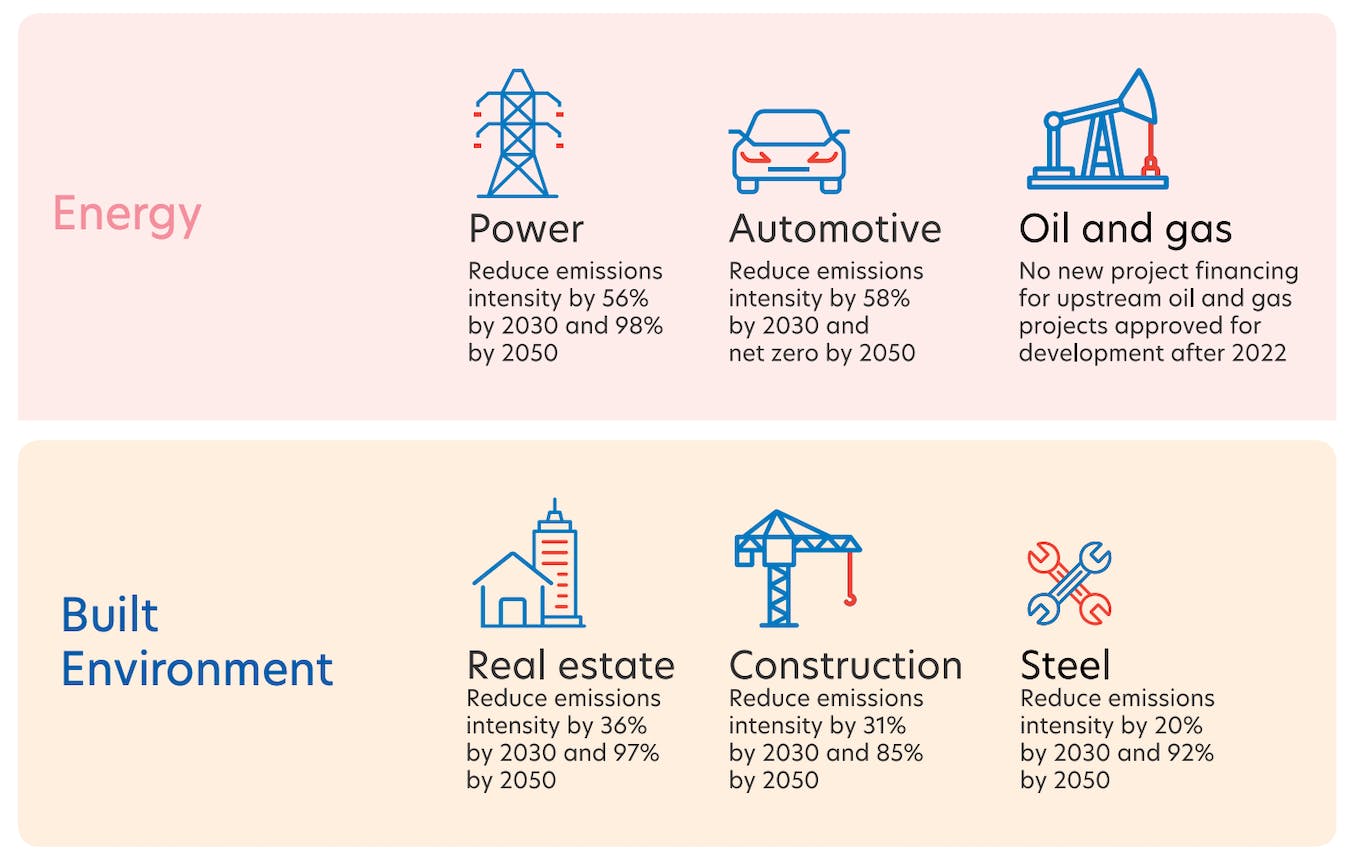 The six sectors identified are most material to emissions reduction, said UOB, and they make up 60 per cent of the bank’s corporate lending portfolio. Image: UOB

Emissions intensity is measured differently for each sector, and are measured against per unit of economic output or activity. UOB said that it wants to “support economic growth with the lowest carbon footprint possible”.

The bank pledged to conduct annual reporting to track progress against its commitments. It will expand the scope of its targets to include additional sectors, for example agriculture, as data and climate scenarios become available.

It also will join the Net-Zero Banking Alliance, a UN-supported coalition, as well as GFANZ Asia Pacific.

Commenting on global developments, particularly tough economic circumstances in Europe that have led to companies letting their environmental priorities slip, Lim said that in Asia, the situation is different, and central banks in the region, including in Thailand, Malaysia and Indonesia, are starting to become more aggressive in pursuing net-zero goals.

“There is recognition in the long run that we need to continue to support our decarbonisation efforts in this part of the world. We don’t see a pullback here. Even if you talk to hard-to-abate sectors, the writing on the wall is clear – we have to move towards net-zero,” he said.

In a briefing note published last week, financial analytics firm S&P Global said that Singapore’s biggest lenders are doubling down on sustainable finance transactions, as they seek to support the government’s bid to become a green finance hub for Southeast Asia. The nation state recently committed to reach net-zero emissions by 2050.

Wee Ee Cheong, deputy chairman and chief executive of UOB, who was present at the conference, emphasised the importance of an orderly and just transition within the regional context, and said that banks need to double down on transition financing to support their clients.

“It will be a challenging journey for businesses, especially small and medium-sized enterprises. For example, they lack resources to collect environmental, social and governance (ESG) data. It is even more complex if the companies operate in multiple markets.”