The mobile app from Sembcorp, called Ezi, aims to make recycling more convenient for residents in Singapore, where only 4 per cent of plastic waste is recycled. Users are paid for the materials they collect—but get nothing for plastic.

Singapore waste management and industrial firm Sembcorp has launched an app that aims to make recycling more convenient for the city-state’s residents, and bypass the government’s troubled recyclables collection system.

The ‘ezi’ mobile app enables residents to have their recyclables collected—at no cost—from their doorstep rather than deposit them beneath their housing blocks in recycling bins, which are blighted by contamination problems.

Some 40 per cent of recyclables placed in Singapore’s blue recycling bins cannot be recycled, because they are placed unseparated with other waste, and become contaminated with food and liquids.

Sembcorp’s materials recovery facility in the industrial west of the island receives up to 60 tonnes of waste a day, but is able to recycle just 50 to 60 per cent of the waste. The rest is incinerated.

The ezi app, which was launched in collaboration with DBS Bank and Republic Polytechnic, also offer rewards to users, and a website features education material on the principles and impact of recycling.

Users will get paid for the recyclables collected, with the price depending on the material. Paper, plastic, metal and clothing will be collected. But not glass.

It is hard to imagine how the value of the material collected can offset the costs of small-scale door-to-door collection, not to mention the carbon footprint of doing so. 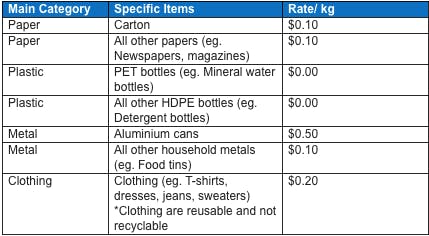 A chart showing how much residents will be paid for recyclables collected, based on current rates as of November 2019. Image: Sembcorp

A Sembcorp spokesperson told Eco-Business that recyclers will be rewarded based on the prevailing price of recyclables, which will be updated based on market conditions. Residents will know how much they will be paid after they key in what they will be recycling during the booking phase.

Commenting on Facebook group Journey to Zero Waste in Singapore, Robin Rheaume, an IT consultant for social enterprises and non-governmental organisations in Singapore, said the reason why glass will not be collected is that Sembcorb has to recycle glass under its contract with National Environment Agency. “However there is no market for glass, so they have to pay to have it taken away. This is a cost they don’t want to incure,” she said.

In response to Eco-Business’ question about glass collection, Semborp said: “While we are unable to collect all recyclable items at this stage, we hope to progressively expand more items over time to improve our collection services and serve residents better.”

To use the app, residents need to create an account with their mobile phone number, take a photo of their washed recyclables, then schedule a collection time. Users can also track or make changes to their collections.

The app is available for download on Apple’s App Store and Google Play, and will be available initially to residents living in the Woodlands area, and is slated to roll out in other parts of the country by the end of 2020.

One challenge for the ezi app will be how to make the economics of the system work, as a door to door collection service will be expensive, and recyclables in Singapore are of low value.

Doug Woodring, founder and managing director of Ocean Recovery Alliance, a civic society group that has been creating solutions to plastic pollution for the last decade, commented: “It’s hard for the recovery of recyclable materials to compete against a waste system which is driven by incineration.”

“It is hard to imagine how the value of the material collected can offset the costs of small-scale door-to-door collection, not to mention the carbon footprint of doing so. But time will tell,” said Woodring, whose organisation erected an 11-metres tall whale made of plastic collected from the Pacific Ocean outside Singapore’s iconic ArtScience Museum last week.

On the economics and carbon footprint of the project, Sembcorp told Eco-Business: “This is an investment on our part to improve the overall recycling rate in Singapore.”

“We see this project as a community effort and hope that residents will accumulate at least 5kg worth of recyclables before booking a collection service with us. This will allow us to effect a more efficient collection process and help us reduce our carbon footprint as we journey towards achieving a better recycling outcome for Singapore.”

In a statement sent to media on Sunday evening, Neo Hong Keat, senior vice president, waste management, Sembcorp, said the company wanted to raise public awareness “on how to recycle right and to bring these conversations to the forefront to drive a change in public behavior.”

He added: “We also want to provide a convenient way for the public to recycle their household items by providing doorstep collection services. We hope that this initiative will help reduce the amount of waste we generate as a nation.”

The ezi app launches three months after Singapore introduced a new waste masterplan to ease the burden on the city-state’s only landfill, which is expected to be full by 2035 or earlier. The plan included newly designed recycling bins with clearer labelling on what can and cannot be recycled to reduce contamination.

Among the targets of the waste masterplan was an increase of the country’s overall recycling rate—which has been largely flat since 2012—from 60 per cent in 2018 to 70 per cent by 2030.

The government also hopes to increase the domestic recycling rate from 22 per cent in 2018 to 30 per cent by 2030.

The new waste reduction targets were deemed unambitious by some.

Dr Martin Blake, strategic advisor to Singapore-based waste management firm Blue Planet Environmental Solutions, noted that with the targeted increase to Singapore’s domestic recycling target—of less than one percentage point a year—would mean barely any overall increase in recycling given the country’s projected population growth, to just under 7 million by 2030, over the next decade.