The rich, convenience-oriented city-state is the first in Southeast Asia to introduce producer responsibility laws to tackle a sobering waste problem. But as its only landfill fills up, does Singapore's Zero Waste Masterplan go far enough?

The Singapore government has launched an eagerly awaited masterplan to tackle the city-state’s acute waste problem, with new targets set to reduce the burden on the island’s only landfill site and create circular economy opportunities around packaging, electronic and food waste.

The Zero Waste Masterplan, launched on Friday, aims to reduce the amount of incinerated rubbish sent to Pulau Semakau by 30 per cent per person by 2030. At current rates, the purpose-built trash island is projected to be full by 2035.

Other targets include increasing the country’s overall recycling rate—which has been largely flat since 2012—from 60 per cent in 2018 to 70 per cent by 2030.

Speaking to Eco-Business on the sidelines of the event, Dr Amy Khor, Senior Minister of State for the Environment and Water Resources (MEWR), said the masterplan would “significantly” increase the lifespan of Semakau, but did not reveal a new date for when she expects the landfill to be full.

Commenting on Singapore’s new waste targets, Louis Ng, Member of Parliament and a prominent environmentalist, said he was pleased “we finally have reduction targets and not just recycling targets,” but stressed the need to tackle the root of the problem and ways to address the city-state’s “throw-away culture”.

He told Eco-Business: “I hope we can continue to focus on reducing our waste and also remember the other “R”s namely ‘refuse’ and ‘reuse’ and have even more ambitious reduction targets. Our future and survival will depend on our zero waste efforts and we need to increase our efforts urgently.”

We believe that closing the plastic loop domestically is an area where economic and environmental opportunities lie.

Dr Amy Khor, Senior Minister of State for the Environment and Water Resources

The S$40 million ‘splash from trash’

The driving force behind Singapore’s waste reduction plan is the Resource Sustainability Act, which makes companies more responsible for the waste created after consumers have used their products.

The first measure is mandatory reporting for companies that produce or use packaging by next year. Aside from reporting how much packaging they use, companies need to produce a plan for reducing their packaging footprint.

By 2021, firms that produce the most hazardous type of waste—e-waste—will be subject to Extended Producer Responsibility (EPR) regulations, which oblige firms to collect post-consumer waste, then recycle it. While common in developed Asian countries such as Japan and South Korea, Singapore’s EPR law is the first in Southeast Asia.

An EPR law for packaging is slated for 2025 or earlier, and companies will need to segregate food waste by 2024.

Khor said the masterplan presented Singapore with a potential S$40 million (US$29 million) economic opportunity to “make a splash from trash” and become a regional leader in circular economy solutions, with 30,000 “high-value” jobs to be created from the local recycling industry by 2025.

She pointed to a new recycling facility opened by e-waste recycling firm Tes-Amm to extract lithium from electric vehicle batteries as an example of how waste can be treated as a resource.

Khor added that China’s decision to ban waste imports, made at the start of 2018, had meant that countries like Singapore had to think harder about how to manage their own waste.

“We believe that closing the plastic loop domestically is an area where economic and environmental opps lie,” said Khor, who added that the National Environment Agency had studied how Singapore could develop its nascent plastic recycling industry.

Lee Wei Yang, deputy director, environmental policy division, MEWR, stressed the importance of extending the life of Semakau. “We don’t have the option of moving our city to another island,” he said, referring to neighbouring Indonesia’s plan to relocate its capital from Jakarta to East Kalimantan. “This is all the space we have.”

We have more than a decade [before Semakau landfill is full]. Why [are the targets] so tame?

The masterplan was welcomed by some business owners. Zhang DiSong, the managing director of recycling firm Anaergia, said the plan would create a waste value chain that has not existed before in Singapore. “In the past, we didn’t have [waste] feedstock. Now we can trade in it,” he told Eco-Business.

Others said the plan did not go far enough to address a waste crisis in the making.

Referring to the aim of reducing the amount of trash sent to landfill by 30 per cent per person by 2030, Dr Martin Blake, strategic advisor to Singapore-based waste management firm Blue Planet Environmental Solutions, said that for a country like Singapore—with a strong ability to regulate effectively—a 75 per cent reduction target would not be too ambitious.

“We have more than a decade [before Semakau is full]. Why [are the targets] so tame?” he said.

On Singapore’s domestic waste recycling target of 30 per cent by 2030, Blake noted that with the targeted increase of less than one percentage point a year, and with Singapore’s population projected to increase from 5.6 million now to 6.5 to 6.9 million by 2030, there would be barely any overall increase in recycling.

The absence of trash segregation in households is the major obstacle to budging Singapore’s poor domestic recycle rate, Blake said.

Singapore residents, 80 per cent of whom live in high-rise buildings, throw their trash down garbage chutes, and place recyclables, unseparated, into blue recycling bins on the groundfloor. 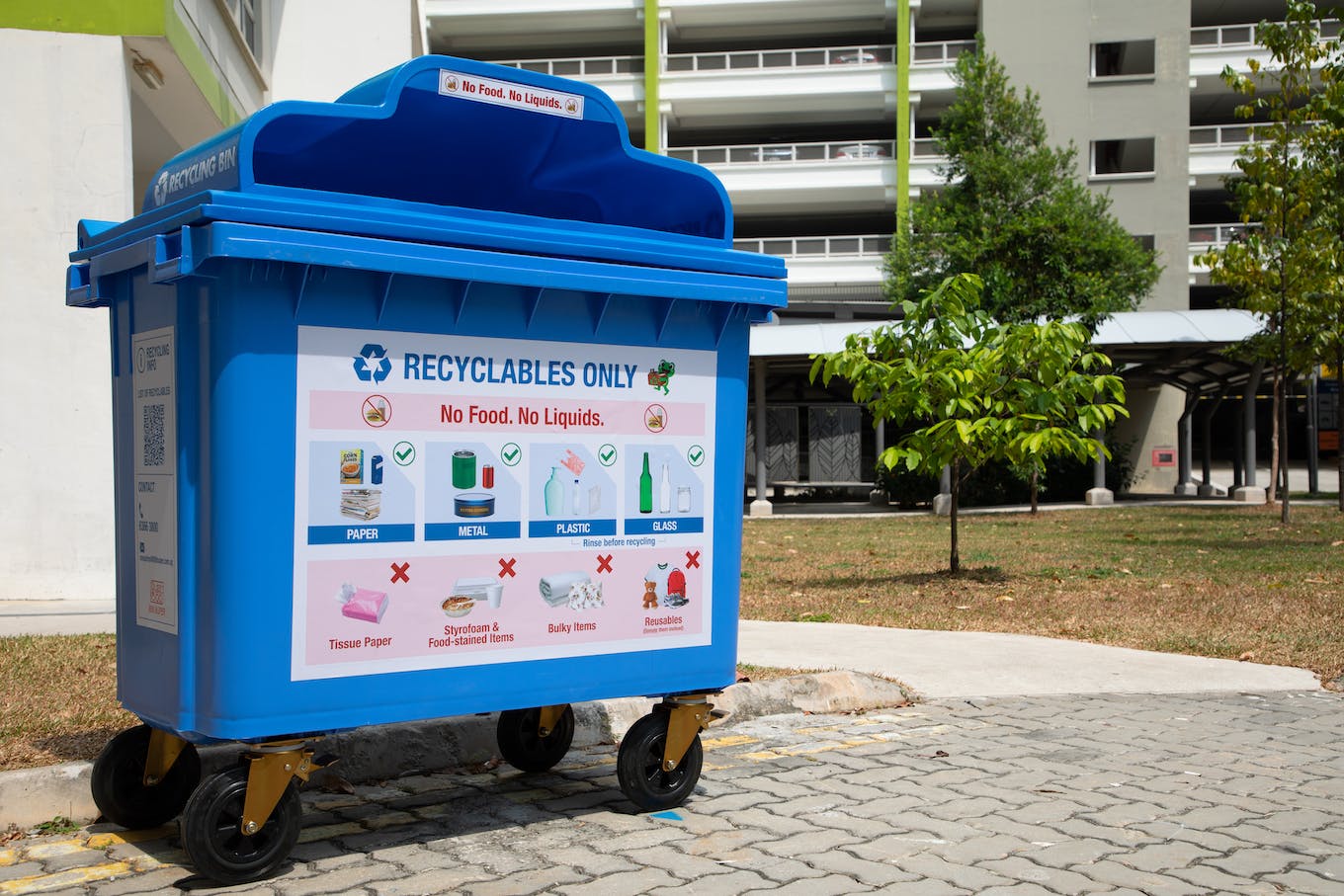 Singapore’s new blue recycling bins. The bins carry new labels explaining what should and should not be placed in them. Image: Ministry of Environment and Water Resources

Since recyclables are thrown in the blue bins together, many items are contaminated by food or liquid and can no longer by recycled. Newly designed bins will carry clearer instructions for how to recycle properly.

Stengert pointed to his country of birth, Germany, home to the world’s highest domestic recycling rate, where there are separate bins for different types of recyclables, and rules and fines in place to enforce proper recycling behaviour.

“In Germany, if your waste is contaminated, the garbage people won’t pick it up,” he said.

Singapore has launched a public awareness campaign called ‘Recycle Right‘ to encourage residents to use the blue bins properly. Some 40 per cent of recyclables placed in the blue bins are contaminated.