Globally, government expenditure needs to be reformed to redirect finance flows, said a new report by the environmental watchdog. Investments into nature-based solutions should more than double to US$384 billion per year by 2025 to be in line with warming limits, it says.

The world is still funding the destruction of nature at an amount that is disproportionately higher than what it has invested in protecting the environment and wildlife, according to newly published financing data.

A report by the United Nations Environment Programme (UNEP) states that governments around the world are spending about US$500 billion to US$1 trillion every year on subsidies for fossil fuels, fisheries and agriculture that hurt the environment. This is currently three to seven times larger than the total amount of investments into nature-based solutions.

In estimates given for the first time, the UN’s environmental authority said that climate, biodiversity and land degradation goals will be out of reach unless investments focused on sustainable agriculture and peatland restoration are quickly ramped up, and at least US$384 billion per year directed into nature-based solutions by 2025. 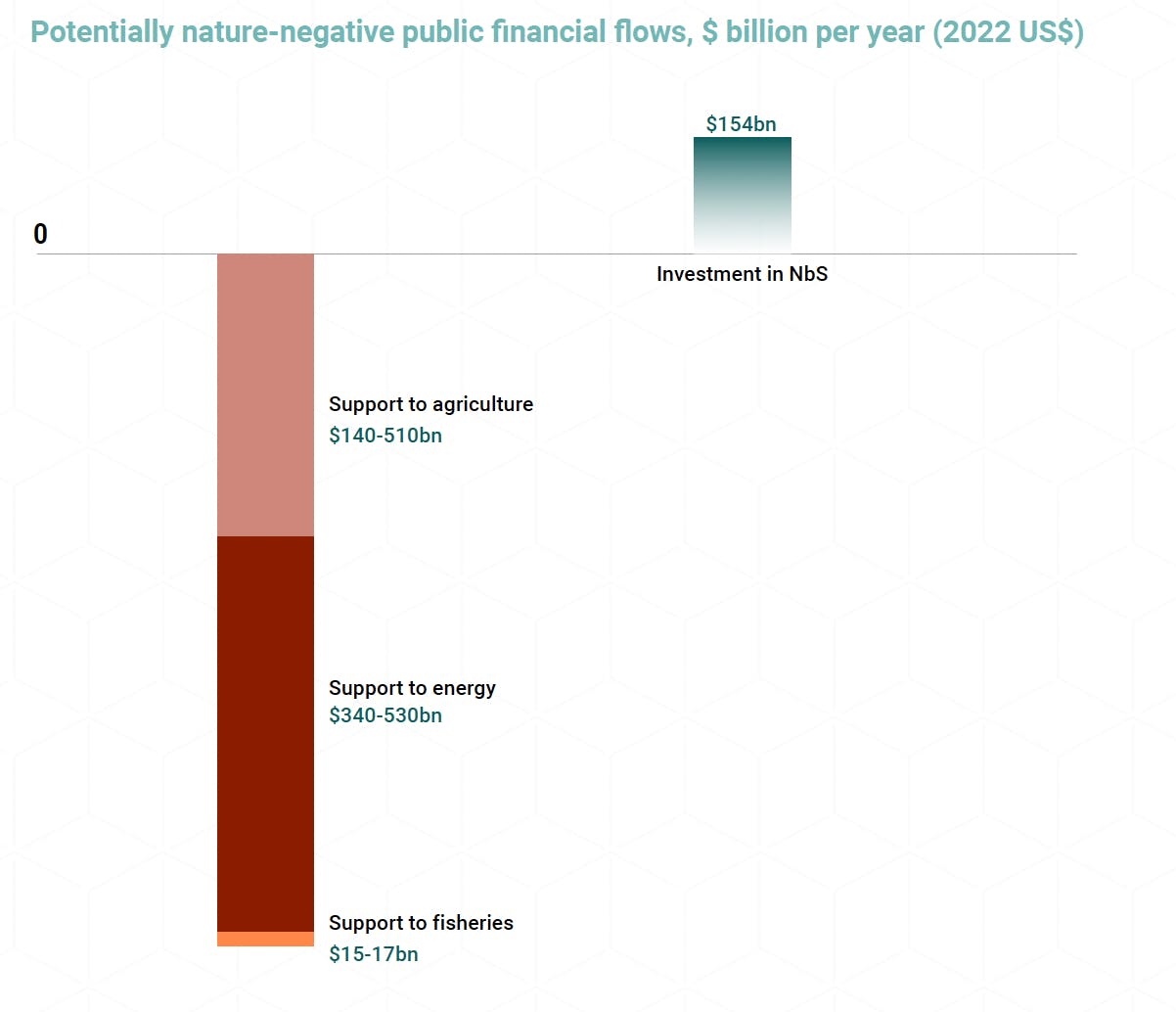 Finance flows towards these solutions are currently worth only US$154 billion per year, less than half of the desired amount to ensure that the world is within reach of the 1.5 degrees Celsius warming limit in line with the Paris Agreement, according to the State of Finance for Nature report, released on Thursday.

Nature-based solutions is a broad term used to describe actions that protect, sustainably manage, or restore ecosystems to address climate change, while also providing a host of additional benefits for people and the environment. At the COP27 climate talks held in Egypt last month, the term was included in negotiation texts for the first time.

“The inclusion is critical because there have been disputes around nature-based solutions – what they mean and whether they are restricted to mitigation,” said Mirey Atallah, head of UNEP’s Nature for Climate branch, in response to questions at a press briefing held before the report’s release.

“Now we have recognition for these solutions at COP27, and there are calls for world leaders at the upcoming COP15 biodiversity summit to reach a sister deal for nature,” she told Eco-Business. “It might mean that we will have a ‘Paris’ moment for nature in Montreal, Canada.”

The UN Biodiversity Conference, referred to as COP15, starts next week. As it comes hard on the heels of fractious COP27 talks in Egypt, observers are generally pessimistic about what could be achieved. More than 100 nations signed up last year in the Chinese city of Kunming to work towards biodiversity protection, but they failed to agree on issues including funding conservation in poorer countries.

This year’s meeting was due to take place in Kunming, but the venue was changed because of its zero-Covid curbs. China will continue to serve as COP15 president.

UNEP, in the report, said that it is putting an estimate on the finance gap for nature-based solutions to demonstrate to key decision makers that nature is a large part of the solution to global crises.

“Politicians, business, finance leaders and citizens globally must transform their relationship with nature to work with it rather than against it. This report provides hope [that it can be done].”

According to the report, in the energy sector, global fossil fuel subsidies across oil, electricity, gas and coal are estimated to be worth US$340-540 billion per year. Harmful support for fisheries, which refers to subsidies for the expansion of fishing capacity beyond a point deemed sustainable, is valued at US$15-17 billion every year globally.

“These flows severely undermine efforts to achieve critical environmental targets,” the report said. It suggested that governments “lock in” critical targets on biodiversity loss and land degradation by having them in national regulation or legislation.

Politicians, business, finance leaders and citizens globally must transform their relationship with nature to work with it rather than against it.

UNEP State of Finance for Nature 2022

UNEP also pointed to how there is an absence of data on private finance flows, though it added that it is “widely recognised” that the finance flows are predominantly negative for nature and “almost certainly exacerbate the situation”.

Currently, private capital represents 17 per cent of total investments into nature-based solutions. The sum – at about US$26 billion per year – needs to increase by “several orders of magnitude”, said UNEP. “Voluntary business commitments without a time-bound plan or roadmap for implementation are not acceptable.”

Even as philanthropic capital and carbon markets have grown significantly over the past year, UNEP noted that impact investment and investment in sustainable supply chains have increased very little.

“This is in stark contrast to the myriad of net-zero and deforestation-free commitments made by agrifood companies, banks and investors, which have seen too little action and too little capital deployed.”