Sustainability isn’t very funny very often. But we found a few stories from 2018 that helped us see the lighter side of drowning cities, burning forests, plastic-choked rivers, and starving polar bears.

Eco-Business tweets from the @OHSustainability account on the rare occasion that something funny happens in the—let’s face it—fairly depressing world of sustainability. Here are a few things that made us slightly less suicidal this year. Because if we didn’t laugh, we’d cry… 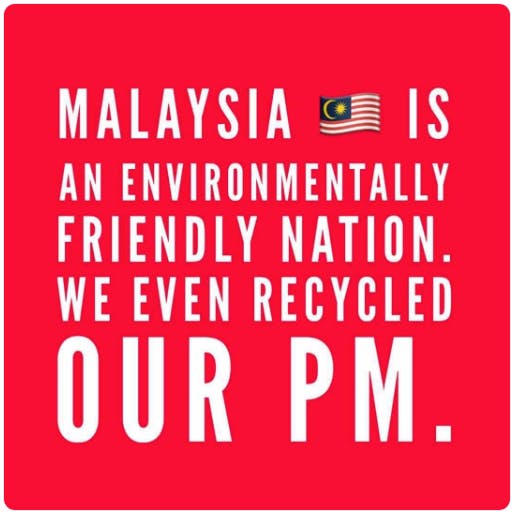 It’s been a fine year for Malaysia on the 2. waste management front. Image: Twitter

Malaysia’s wily prime minister Mahathir Mohamad probably had his tongue in his cheek when he proposed a new form of renewable energy during a panel discussion at the Conference of the Electric Power Supply Industry (CEPSI) in Kuala Lumpur in September. “Electricity comes from electric eels,” he told a bemused audience at the KL Convention Centre. “Maybe in the future we’ll be breeding farms of electric eels.” On the topic of Mahathir, this image (right) was circulated to congratulate the 93 year-old on his election victory in May, which gave him a second stint as prime minister. Who says the new dumping ground for the world’s trash isn’t good at recycling?

One Malaysian who apparently wasn’t joking when he came up with a far-out idea was Satim Diman, formerly the information chief for Selangor, who promised to give away free plastic bags if his party won the state elections. “Do you want this?” he asked at a rally.

Apparently not. One voter commented: “How about offering us government subsidies so we can get free white sugar, fast food and diesel-powered trucks to dump our trash in the river?” Opposition politician Lim Lip Eng called the idea “the height of idiocy” and mockingly suggested that cities in Selangor be marketed to the world as “cities of plastic” to attract shoppers who love free plastic bags. 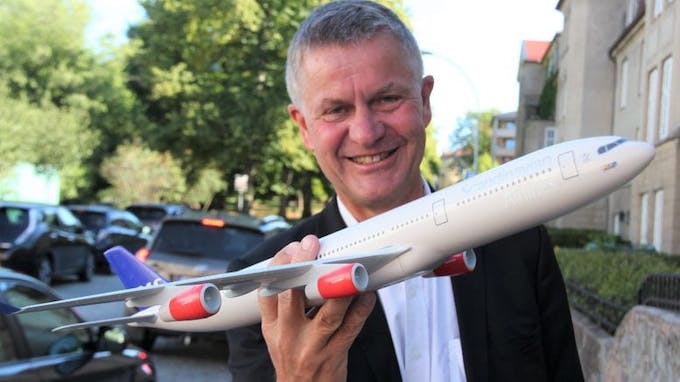 Solheim, who blew half a mill on travel in 22 months, tweeted that he would continue to “champion the environment” after he left the UN. Image: Bergensia.com

Erik Solheim, the former executive director of United Nations Environment, might not have received such a mauling on Twitter had he shown a fraction more humility when announcing his resignation from the UN in October. After all, he had been found by auditors to have blown almost $500,000 on air travel and hotels in 22 months, spent 529 out of 660 days as UN’s climate boss on climate-punishing trips, twice upgraded his travel arrangements to more lavish options, once taken an eight-hour flight from Washington DC for a weekend in Paris before hopping on another flight from Paris to New York, and generally abused rules on travel and expenses, dragging UN Environment’s reputation backwards through a carbon offsetting scheme in the process.

Solheim’s farewell tweet, which read like the adieu of a departing hero, received the responses it probably deserved. “Champion the environment? You mean chomp on the environment.” “Dude, you got Skype, yet you chose to be the Scott Pruitt of UN Environment. Go join a lobby or something.” “Maybe the environment will improve now you’re not flying so much.” “I could buy 4 houses in my country with the money you spent on travel.” “You made a dent in the sky.” “Download Airbnb next time?” “You should start a travel agency.” Solheim might not be seen on Twitter so much anymore. But you’ll probably find him in a business class departure lounge.

4. Of banks and penguins 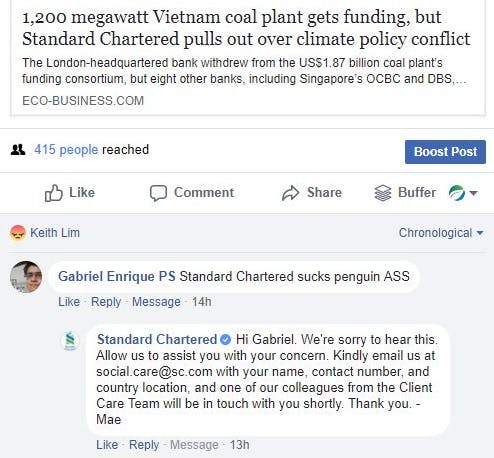 We’re sorry to hear this, Gabriel.

Standard Chartered Bank scored some brownie points among greenies in April when it pulled out of a deal to finance a massive coal-fired power plant in Vietnam in response to pressure from climate activists. But the bank has found that it’s quite a challenge when responding to social media trolls.

5. The vodka with nothing to hide

Asian companies wondering how to tell the world how transparent and sustainable they are, Swedish vodka brand Absolut provided a bit of creative inspiration this year. Because nothing says transparency quite like a bunch of nude dudes in a field. 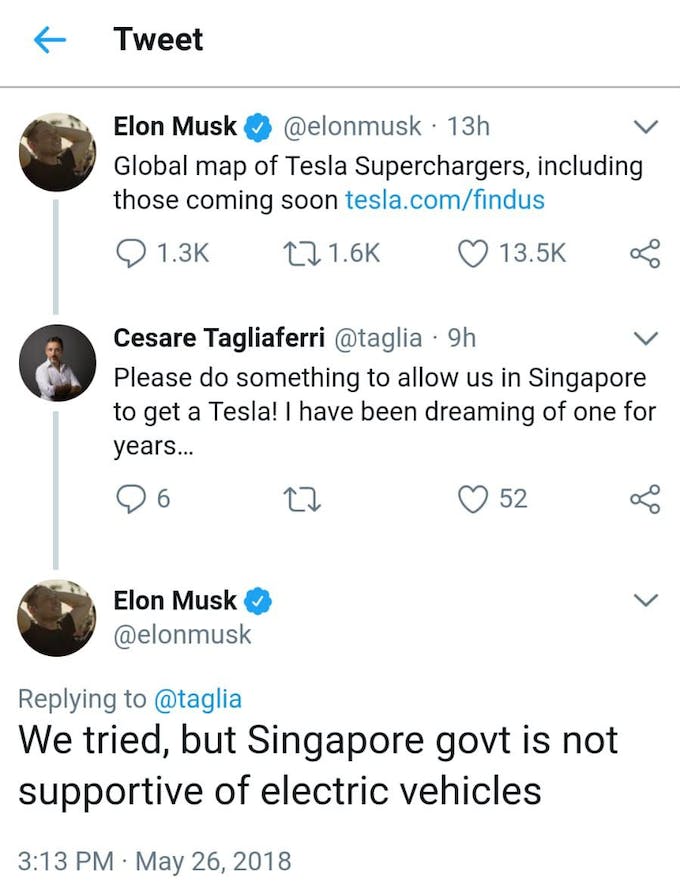 Your move, Ministry of Environment and Water Resources. Image: Eco-Business

Elon Musk delivered a blow to Singapore’s green credentials in May when a Tesla fan pleaded with the company’s enigmatic chief executive to bring the famous electric vehicles to the city-state. Musk dissed the Singapore government as “not supportive” of EVs, prompting a response from The Straits Times’ cheesed-off transport correspondent on why Tesla’s EVs suck (too expensive, restricted range, limited product choice, blah de blah).

For cringe-worthy communications in a time of crisis, one palm oil company really took the biscuit this year. When Bumitama Agri was hit with a probing investigation by Greenpeace in October, the Singapore-listed firm appeared to hit the panic button. Bumitama was accused of concession laundering, which is a complicated ploy that involves pretending to not own land that you actually own. In response to Greenpeace’s report, the company hurriedly told the world: “None of the acquisitions were not intended to create artificial value that would defraud our investors by skimming off something first and then selling to the listed company.” Freudian slip?

8. A book review by Donald Trump

In an interview with Eco-Business in October, Jeff Goodell, author of a book on rising sea levels, first of all explained the title of his book. “Due to the amount of heat that is already built up in the world’s oceans, a certain amount of sea level rise is inevitable. And it’s why my book is titled The Water Will Come, not The Water Will Come Unless We All Install Solar Panels on Our Roofs,” he said. He was later asked what sort of review he thought America’s climate-sceptic president would give his book. He replied: “I’m not convinced Donald Trump can read, so it’s probably a moot question.” 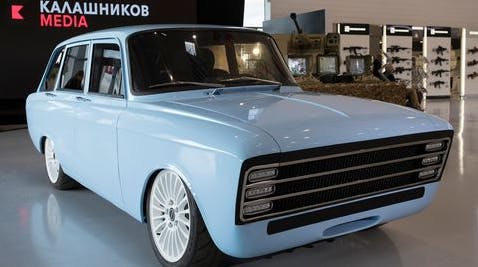 For unlikely product launches of the year, a company famous for making things that kill people came up with a product that could save the world. To be honest, we thought it was fake news at first, or an April fool story come early. Like Marlboro selling air purifiers or Shell going into renewables. But no. It turned out that Russian gunmaker Kalashnikov is taking on Tesla and making electric cars now. An EV with mounted AK47s, anyone? James Bond would approve.

There was always a chance that a story about sex might prompt fruity comment from readers. Eco-Business’ special report on eco sex introduced us to Mehmet, a 57 year-old divorced banker with very specific tastes in women. He was looking, via the Eco-Business comment thread, for an honest-hearted, feminine, widowed, Asian businesswoman. “Hello, dear Asian ladies,” he wrote, before sharing his vital statistics. “I want a new wife. I’m ready. I like mountains, forests, valleys, hills, the sea, lakes, trees, gardens, babies and baby animals. I can write poems and sing. I am calm and patient. I want to be your right arm.” Those interested leave a comment below and we’ll put you in touch. Who says true love can’t be found on a sustainability website?