Fast-growing economic powerhouses in the region such as India and China are staking their places on the ESG benchmark, though a few Japanese firms lost their spots on the Asia Pacific list.

More businesses from China, India, Taiwan and Thailand have been added to the Dow Jones Sustainability Indices, a major benchmark for firms that do good while making money.

The number of Asian firms in the emerging markets category of the index rose from 75 last year to 82 this year, out of about 110 companies in total which also includes entities from Europe, Africa and the Americas. 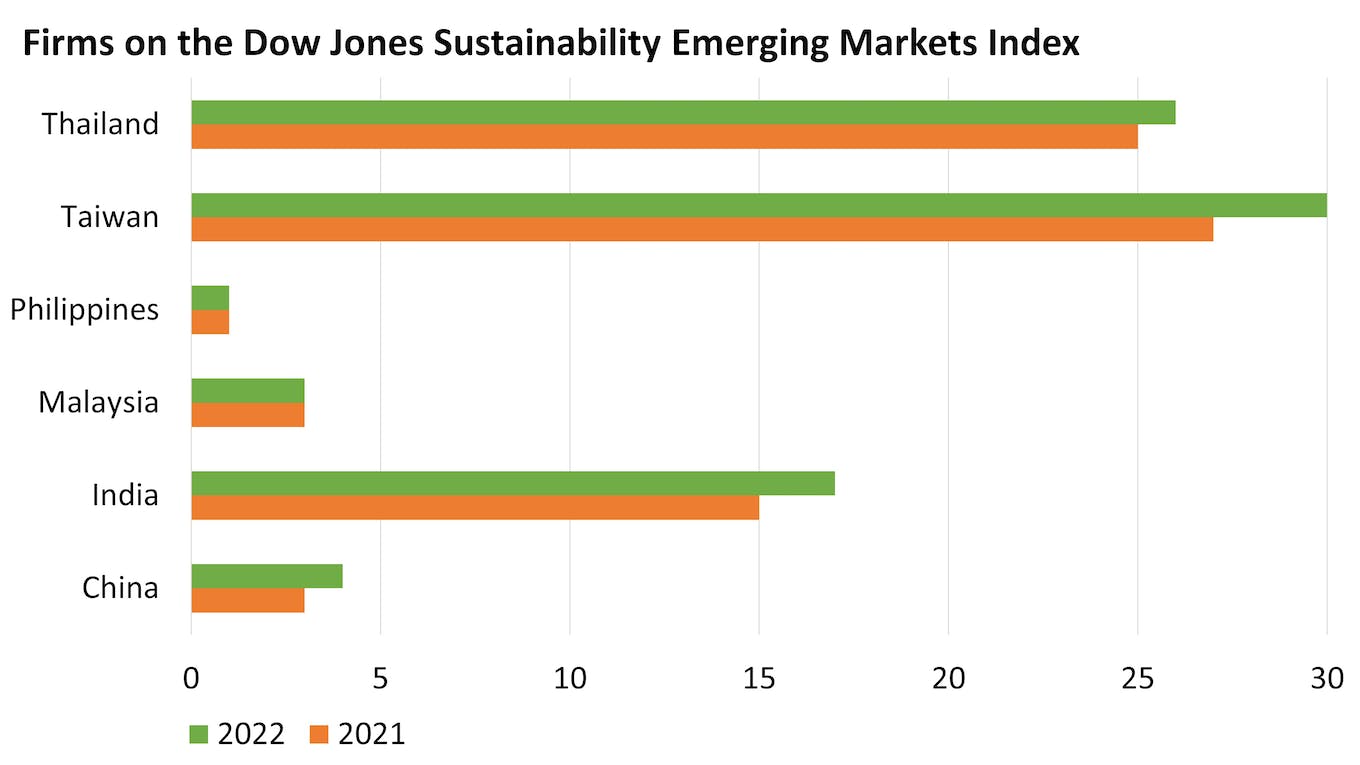 India’s Adani Enterprises has been added to the list, following a year-end review of the index by its publisher, S&P Dow Jones Indices. Adani Enterprises is helmed by Gautam Adani, one of the world’s richest persons.

The billionaire has pledged billions in renewables and wants to make the world’s cheapest renewable hydrogen fuel, though his conglomerate has been criticised for its growing coal portfolio. Adani Ports, another entity under the Adani group, was struck off the Dow Jones Sustainability Index last year due to its business ties with Myanmar’s military, which is involved in a bloody takeover of its civil government.

Adani Enterprises has not responded to Eco-Business’s queries by press time, on what its inclusion in the index means for the firm, and its sustainability plans moving ahead, including for its coal portfolio.

Thailand has one net addition to the index, with three additions and two boots – including the petroleum exploration arm of state-owned oil and gas firm PTT, though other branches of the group remain on the list.

“It is comforting that emerging Asian markets are making it into the [Dow Jones Sustainability Index] lists,” said Professor Lawrence Loh, director of the Centre for Governance and Sustainability at the National University of Singapore, adding that the trend “augurs well” given that there has always been a divide between the sustainability credentials of developed and emerging markets.

“It is sometimes said that [emerging] markets are [both] the problem and the solution in our global fight against climate change – perhaps we are seeing the trend of solution rather than problem now,” Loh said.

Japan, the leading market in the Asia Pacific index, lost three spots overall, with 74 firms represented after the review. Australia gained one spot with 24 firms, while South Korea stayed constant at 33.

Keppel has also been added to the global index, while City Developments Limited will be dropped from there.

Sustainability standards in Asia are generally regarded as lower than the West, with greater fossil fuel use and less rules for corporate disclosure. Many countries in the region have only started industrialising in recent decades – causing environmental protection to clash with poverty reduction and economic development.

Over 3,500 of the world’s largest companies were invited to take part in a survey for the sustainability index, which includes questions on human rights, climate strategy and corporate governance. The firms’ economic performance is also taken into account.

Firms can be disqualified if they have dealings in, for instance, adult entertainment and arms sales; 16 companies have been excluded in the latest review. Trade or use of fossil fuels is not an exclusion criteria.

American finance firm S&P Global, one of the entities organising the exercise, says more companies, representing a bigger slice of world capital, are in the running for the index this time round, in “another win for sustainability”.