India glacier disaster: In a warming world, is there no less lethal a way to power development?

On Sunday morning, 7 Feb, as most of the working class in India’s Himalayan state of Uttarakhand went about their chores, the glacier-fed Rishi Ganga river started rising.

Two hours later, swollen with rock debris and snowmelt, its waters rose 53 feet — the height equivalent of a five-storey building.

The Dehradun-based Indian Institute of Remote Sensing (IIRS), part of Indian Space Research Organisation (ISRO), estimates that approximately 2 to 3 million cubic metres of water was released in the surrounding rivers.

As the brown-grey, monstrous body of water crashed down the steep river path, hilltop residents first to see it lost no time. Mothers called their sons working on the construction of the 480 MW Tapovan-Vishnugad hydro-power project and dam and urged them to flee.

“Flee for your mother’s sake”, they pleaded. Several people on high ground recorded the disaster, posting it immediately as an alert on social media. Frantic shouts from brothers and friends to those in harm’s way to “climb up somewhere, anywhere,” echoed down into the valley and saved lives.

Even before the echoes of their calls had died down the water mass had smashed through the construction of the Tapovan-Vishnugad hydro-power project and the functional 13.2 MW Rishiganga project as if they were Legos.

It swept 30 workers into the dam’s 1,500-metre tunnel and carried others downstream.

The missing people include around 120 workers from the dam construction and villagers whose homes were washed away. Even those out in the grazing pastures and working on farms got caught up in what appeared to be a glacial lake outburst flood.

These floods are characterised by a sudden release of a huge amount of lake water that rushes along the channel downstream in the form of dangerous flood waves.

As of today, 16 Feb, 20 bodies and 12 human limbs have been cremated after DNA sampling; 58 bodies have been recovered and 164 are still missing.

What really triggered the flash-floods?

The day after the disaster the government’s IIRS put out a notice on its website stating, “it is observed from the satellite data of 7 Feb 2021 in the catchment of Rishi Ganga river at the terminus of the glacier at an altitude of 5,600m a landslide triggered a snow avalanche covering approximately 14 sq. km area and causing a flash flood in the downstream of Rishi Ganga river.”

“Satellite images do not show the presence of a lake,” Mauri Pelto, a glaciologist and Professor of Environmental Science at Nichols College in Massachusetts, told IPS via a Skype call.

It raised the question of why there had been such a large flood of water.

“The likely explanation is that the landslide blocked a glacial stream and subsequently the stream burst through after being dammed. This is what I would look for — a temporary blockage of maybe for an hour. Even a 15-minute blockage could pile up a lot of water (from large glaciers streams),” Pelto said.

An ISRO satellite image taken on Feb. 6 shows a crack developing on the Trishul rock glacier. On the morning of 7 Feb, the mountain face shows the block of rock, with some ice, had dropped from about 5,600 m to about 3,800 m, crashing almost two kilometres and fragmenting to generate a huge rock and ice avalanche.

It barrelled down the steep glacier with huge speed generating heat and gathering more ice, water and rocks into itself each every millisecond.

A study by the Divecha Centre for Climate Change (DCCC) of the Indian Institute of Science (IISc), Bengaluru, using modelling studies, said that when the stone and snow avalanche came crashing from 5,600m down the mountain side, the impact could have breached subglacial lakes.

Subglacial lakes are bodies of water that form beneath ice masses when meltwater is generated evading satellite capture.

This, they said, was the bulk water source of the flash floods. 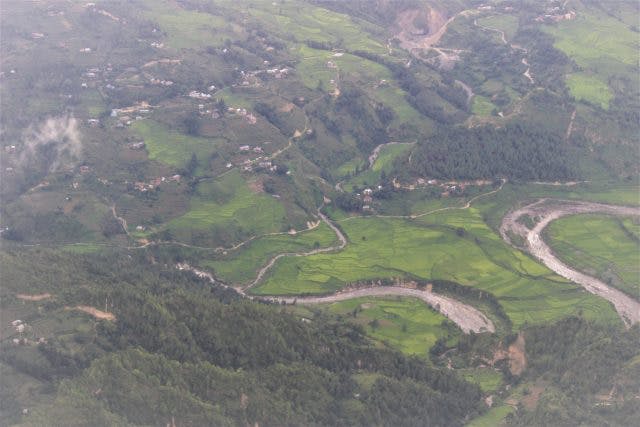 Scattered settlements at the foothills of the Himalayas with a glacier-fed river meandering close in Nepal. Image: Manipadma Jena/IPS

How much was climate change responsible?

“This event occurred after a post-monsoon season featuring high snowlines (Glacier snowlines are indicators for the elevation where melting predominates) on Trishul and adjacent glaciers and the warmest January in the last six decades in Uttarakhand,” said Pelto, who since 1984 has directed the North Cascade Glacier Climate Project that monitors the mass balance and behaviour of glaciers in North America.

“By mid-October 2020, the snowline had risen to 5,800 – 6,000 metres above sea level on Trishul and an adjacent seven glaciers as seen in Landsat and Sentinel satellite imagery. This rising snowline indicates warmer temperature and a height above which the freezing line rose frequently in 2020. This also indicates that the freezing line rose frequently above the Trishul landslip/ collapse point at 5,600m frequently enough in 2020. Here melting exceeded snowfall,” he explained.

“After the October 2020 warmth, by 11 Jan, snow blanketed the glaciers down to 4,400 m, but again a subsequent warm period led to widespread melting and snow cover loss climbed up to at least 5,000 m on the Trishul Glacier,” Pelto explained.

“Three coincidences are aligned here: Right at this very warm year, right at the elevation where unusual melting occurred, you have a landslide. Why would it happen now? There is an answer in the alignment,” he told IPS, explaining that the answer was climate change.

Supporting this explanation is research published in Science Direct in July 2020, which assessed the impact of climate change on glaciers in the same region – the upper Rishi Ganga catchment, Nanda Devi region in Central Himalaya from 1980 to 2017. It found 10 per cent of glaciated areas had been lost – from 243 square kilometres in 1980  down to 217 in 2017.

Another significant finding from this research is that glaciers here are permanently losing ice, not only owing to higher temperatures from global warming but also in response to “deprived precipitation conditions” since 1980. Deficient winter rains, which glaciers largely grow on, is in fact starving them.

Pelto said glaciers here are more thinning than retreating, particularly in the glacial area between the snowline and someplace below the top region, which is debris covered.

This would eventually lead to an increased number of glacial lakes spread over more area. The potential for a glacial lake outburst disaster thus spreads and endangers more places and more communities.

Worse could happen. According to a study published this January in The Cryosphere, meltwater from ice avalanches in the Himalayan western Tibetan Plateau have been filling downstream lakes in a way that may cause previously-separated lakes to merge within the next decade.

As the glacier retreats, it leaves a large void behind. Ponds occupy the depression earlier occupied by glacial ice.

The moraine walls composed of large rocks, sediment (glacier debris) that were in the glacier act as a dam but are structurally weak and unstable and undergo constant changes and there exists the danger of catastrophic failure, causing glacial lake outburst floods.

The propagation of these flood surges trigger landslides and bank erosion that temporarily block the surge waves and result in a series of surges as the landslide dam breach.

Earthquakes may also be one of the triggering factors depending upon its magnitude, location and other characteristics. Discharge rates of such floods are typically several thousand cubic meters per second.

“In the recent event we see snowlines lines rising higher and on the other hand, there was no retained snow on glaciers. If this happens the glaciers cannot survive,” Pelto said.

Of the Trishul rock face that cracked and collapsed, Pelto said, “All mountain faces are living with lot of cracks. Over time they may widen. Ordinarily the cracks are held together by the ice covering. Take the ice away and they are not held together anymore, vulnerable to rock slips.

“These are preconditions to the disaster. I expect to see more of such (Chamoli tragedy) events,” he told IPS.

Too many hydropower projects, too many lost lives

With steep slopes that make river electricity generation possible, government sources said Uttarakhand is being developed as an ‘energy state’ to tap an estimated hydropower electric potential of over 25,000 MW.

About 77 percent of the capacity owned by state utilities is based on hydropower. According to sources, while Uttarakhand’s hydropower installed capacity is 3,177 MW from about 40 operational projects, a total 87 more projects are being developed by the Uttarakhand government, government of India and private power producers.

But in a sensitive, somewhat unstable river bed region, even if it is clean energy production, the risk of avalanche, flash floods, loss of life and costly infrastructure is to be carefully weighed against development gains, activists have been saying.

After the massive 2013 floods in Uttarakhand caused by high-intensity rainfall over days and seen as the worst extreme climatic disaster in 100 years in the Himalayan region, India’s highest court banned further hydropower installation in the state.

The court had stated in its ruling that no proper disaster management plan was in place. But the Indian and state governments have found ways to circumvent the ban, aiming to export electricity beyond the state.

Over 2013 to 2015, Uttarakhand lost an astounding 268 sq. km of forest cover as documented by the bi-annual India State of Forest Report.

Much of the cleared land was for development projects, including roads, hydropower projects and distribution lines, hotels, and mining. In 2019 some forest cover was regained.

“When you need to produce a lot of electricity locally and hydropower is the easiest available method, run-of-the-river where pipes or weirs extract water at a height and drop it over a turbine would get sufficient output even while returning the water back to the river,” Pelto said. This echoes the majority voices advising small and micro-hydro projects that can power several villages clusters, instead of large or medium projects.

“When you invest in a structure all across a river’s width you spend a lot, what are the chances it will last 50 years?” Pelto cautioned.

Families of the 58 dead shudder to imagine their loved ones taken over by the ferocious sludge-waters, choking them deep inside the 1,500-metre Tapovan-Vishnugad dam tunnel, carrying others like straw dashed against rocks. And the families of the 164 missing wait with hope dimming.

They have every right to ask the governments “is there really no less-lethal way to generate electricity for development?”

This story was published with permission from IPS.