Indonesia's largest online food delivery service, Go-Food, has introduced a charge for disposable cutlery. It could be the first delivery service in Southeast Asia to do so, as the region searches for business solutions to the plastic pollution crisis.

In one of the boldest measures yet to reduce plastic waste in Southeast Asia’s fast-growing online food delivery sector, Go-Food, a hugely popular food delivery service from ride-hailing app Gojek, will slap a IDR 1,000 (7 US cents) charge on orders which request disposable plastic cutlery.

The company will also provide drivers with new delivery bags, so that merchant partners can pack food directly into the new bags without using plastic carriers.

The opt-in disposable cutlery idea has been implemented by other online food delivery services in the region in response to growing consumer concern over plastic pollution—albeit at no additional cost to the customer. This involves the companies setting “no cutlery” as the default option on their delivery menus.

The opt-in function was introduced by Berlin-headquartered Foodpanda and UK-based Deliveroo last year. Gojek’s Malaysia-headquartered rival Grab will be inviting its customers to avoid disposable cutlery from September this year. 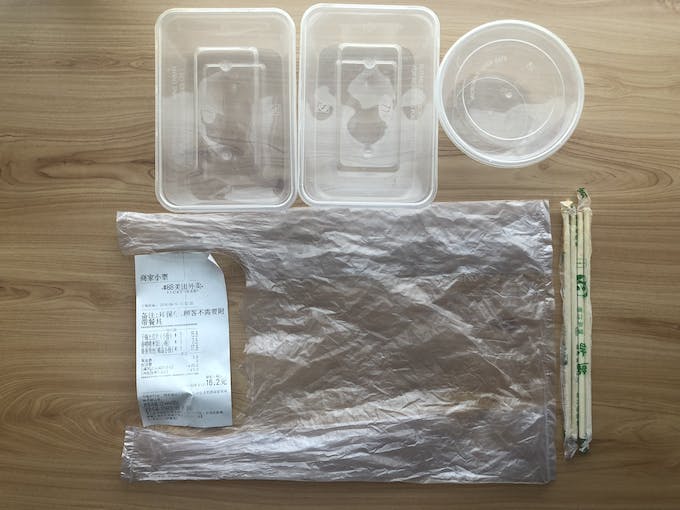 The plastic packaging and disposable cutlery that comes with a typical food delivery. Image: Wang Chen via chinadialogue

However, while efforts to reduce disposable cutlery are encouraging, cutlery is only a small portion of the total amount of waste generated from each online food delivery. For every 1 million sets of cutlery saved, at least 1 million more plastic boxes and plastic carriers are thrown away.

Gojek, which processed 529 million food and drink orders through Go-Food last year, is also working with the city government of Denpasar and local green group PlastikDetox to run workshops for hundreds of merchants in Bali on the importance of reducing plastic use in business operations and how they can go about doing so.

The initiative follows a series of government-level policies to address Indonesia’s sobering consumer plastic problem. Indonesia, the world’s second largest marine plastic polluter, generates 175,000 tonnes of waste a day, 15 per cent of which comes from single-use plastic used for food packaging, consumer goods, and shopping bags, according to data from Indonesia’s Ministry of Environment and Forestry.

Single-use plastics have been banned in 14 Indonesian cities including Banjarmasin City, Balikpapan City, Bogor City, and the entirety of Bali province.