Apple, Nike, Amazon, Uniqlo and Zara are among the 83 companies whose suppliers are linked to the forced labour of China's ethnic Muslim minority, according to a new report from an Australian thinktank.

Tens of thousands of ethnic Muslim Uyghurs are working under conditions of forced labour in factories across China that supply more than 80 global brands, a new report has found.

According to Uyghurs for Sale, a report by Canberra-based thinktank Australian Strategic Policy Institute, 83 major brands including Nike, Amazon, Uniqlo, Google, Huawei, Apple, H&M, BMW and Zara either work directly or source materials from at least 27 factories where scores of Uyghurs work under gruelling and discriminatory conditions far from home.

Goods found to have passed through the hands of Uyghur workers in these factories include Nike sneakers, iPhone selfie cameras, and electronic display screens widely used in smartphones, tablets and computers.

Citing government documents and local media reports as well as satellite imagery, the report says that 80,000 Uyghurs were transferred out of Xinjiang region in China between 2017 and 2019 and assigned to factories through a labour transfer programme under a central government policy known as ‘’Xinjiang Aid’’.

Under the state-sponsored initiative, Uyghur workers, some of which are said to come directly from China’s network of internment “re-education’’ camps, are transported in “special segregated trains” to factories where they “are subject to constant surveillance and forbidden from participating in religious observances.”

Uyghur workers are assigned government minders to monitor them, and that they have limited freedom of movement, states the report.

A Washington Post article described one of the factories, Qingdao Taekwang Shoes Co., which churns out trainers for sports giant Nike, as a prison with “watchtowers and barbed-wire fences atop the walls.”

In response to the recent findings, a Nike spokesperson told the Washington Post that the company is “committed to upholding international labour standards globally” and prohibits its suppliers from “using any type of prison, forced, bonded or indentured labour.”

H&M, another major fashion brand implicated in the report, is currently examining the findings and told Eco-Business that the company strictly prohibits forced labour in its supply chain.

“We are deeply concerned by reports from civil society organisations and media that include accusations of involuntary labour from ethno-religious minorities in Western China,” said Dominic Roter, press officer for H&M Group.

Japanese fashion brand Uniqlo told Eco-Business that the company does not have any production partners located in the Xinjjiang region.

“While we are aware of claims made in a recent report, we can confirm that we do not have any business with those two factories linked to Uniqlo. In addition, through the company’s factory monitoring program, which includes a hotline for workers to contact us directly, we have not learned of any of the issues raised in the report,” said a spokesperson.

Following an annual review of their global supply chain in 2019, American retailer Abercrombie & Fitch said that prior to the report, the company had instructed their vendor to stop sourcing from the factory implicated from this year onwards.

Other brands including Adidas, Bosch and Panasonic claim to have no direct contractual relationships with the factories.

Meanwhile, the Chinese government has denied any commercial use of forced labour from Xinjiang and have referred to Uyghur workers as “surplus” or “poverty-striken labour.” Officials have called the country’s ethnic Uyghur population “backwards” and claim that the labour transfers alleviate poverty and open up economic opportunities in Muslim-dominated regions.

In a press conference, spokesperson Zhao Lijian from the Ministry of Foreign Affairs responded to the report’s allegations, calling them “simply baseless” and part of an agenda to “smear China’s counter-terrorism and de-radicalisation measures in Xinjiang.”

While we are aware of claims made in a recent report, we can confirm that we do not have any business with those two factories linked to Uniqlo.

From detention camps to prison-like factories

China’s de-radicalisation efforts, symbolised by mass incarceration of Uyghurs in an extensive prison camp network, have drawn worldwide condemnation from human rights groups and international watchdogs that have called the campaign “cultural genocide.”

Widespread detention of Uyghurs and other Muslim minorities in China first came to light in 2018 after journalists exposed cases of people being detained for expressing their Muslim faith, or having connections to Muslim-majority countries like Turkey. In such camps, detainees are made to study Mandarin, comply with a strict ideological and physical regimen and pledge loyalty to the Chinese state.

The Chinese government has dismissed such reports as fake news and called the camps “vocational training and re-educational centres” that are used to fight religious extremism and terrorism in the Muslim-dominated region of Xinjiang. Inter-ethnic riots in 2008 and subsequent fatal attacks by Uyghurs in the region preceded China’s escalation of its anti-terrorism campaign. 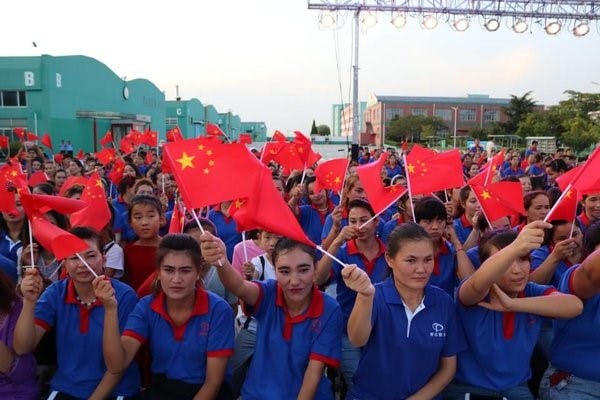 “The Chinese government is now exporting the punitive culture and ethos of Xinjiang’s ‘re-education camps’ to factories across China,” said Vicky Xiuzhong Xu, the report’s lead author, in an interview.

Considering how complex and fragmented global supply chains are, it will now be difficult to ensure that products manufactured in China are free from forced labour, states the report.

The report recommends that multinational companies be given “unfettered access to allow them to investigate any abusive or forced labour practices in factories in China” and to “conduct immediate human rights due diligence on its factory labour in the country.”

According to Sophie Richardson, China director for Human Rights Watch, companies have a basic obligation to conduct regular and rigorous due diligence to ensure their operations are not causing or complicit in human rights violations.

However, many companies have already acknowledged that such due diligence is difficult if not impossible in Xinjiang due to tight government control of the area, which in turn means they need to consider whether they should continue operating in that region, she said.