The latest draft of the overall decisions from the climate summit omits key climate asks of developing countries and civil society, such as the phase down of all fossil fuels.

The latest draft of what could be the overarching agreement from the COP27 climate summit in Egypt has come as a disappointment for parties who were expecting to see stronger language in the document. A clause raised by India to mention the “phasing down” of all fossil fuels, one that has received widespread support from developed states and small island countries alike, has been omitted.

The draft also does not call for stronger controls on methane, a greenhouse gas more potent than carbon dioxide, nor does it ask for countries to peak emissions by 2025 – a trajectory scientists say is key to limiting global warming to 1.5°C.

Observers are starting to pin blame on the Egyptian hosts of the COP27 summit, who are heading talks that have at times been tense and fiery, and that are all but certain to run into overtime this weekend. Whatever makes it into the final decision text requires the nod of all negotiating parties.

“It is quite notable that the expansion of the fossil fuel phase-down language for coal, oil and gas is not in the text yet again, despite the fact that many countries both developed and developing have asked for it to be in the text,” said Alden Meyer, a senior associate at London-based think-tank E3G.

“It is clearly a [COP27] presidency decision to make [countries] fight for adding it on the [negotiation] floor rather than putting in language into the text, like the United Kingdom did last year, and daring countries to try to strip it out,” Meyer said.

In the COP26 talks last year, a clause to “phase out” coal, the most pollutive form of fossil fuels, had been in early drafts of the summit’s concluding text, before the wording was softened to “phase down” after intervention from countries including India.

Nonetheless, Meyer said the new draft, released Friday (18 November) morning, is a better basis for negotiators to work on compared to an earlier draft on Thursday that officials had complained about being unbalanced and lacking substance.

Catherine Abreu, executive director of non-profit Destination Zero, said that the Egyptian presidency is ignoring calls made by several countries, including the United States and several European nations, which wants stronger langauge against all fossil fuels, not just coal. 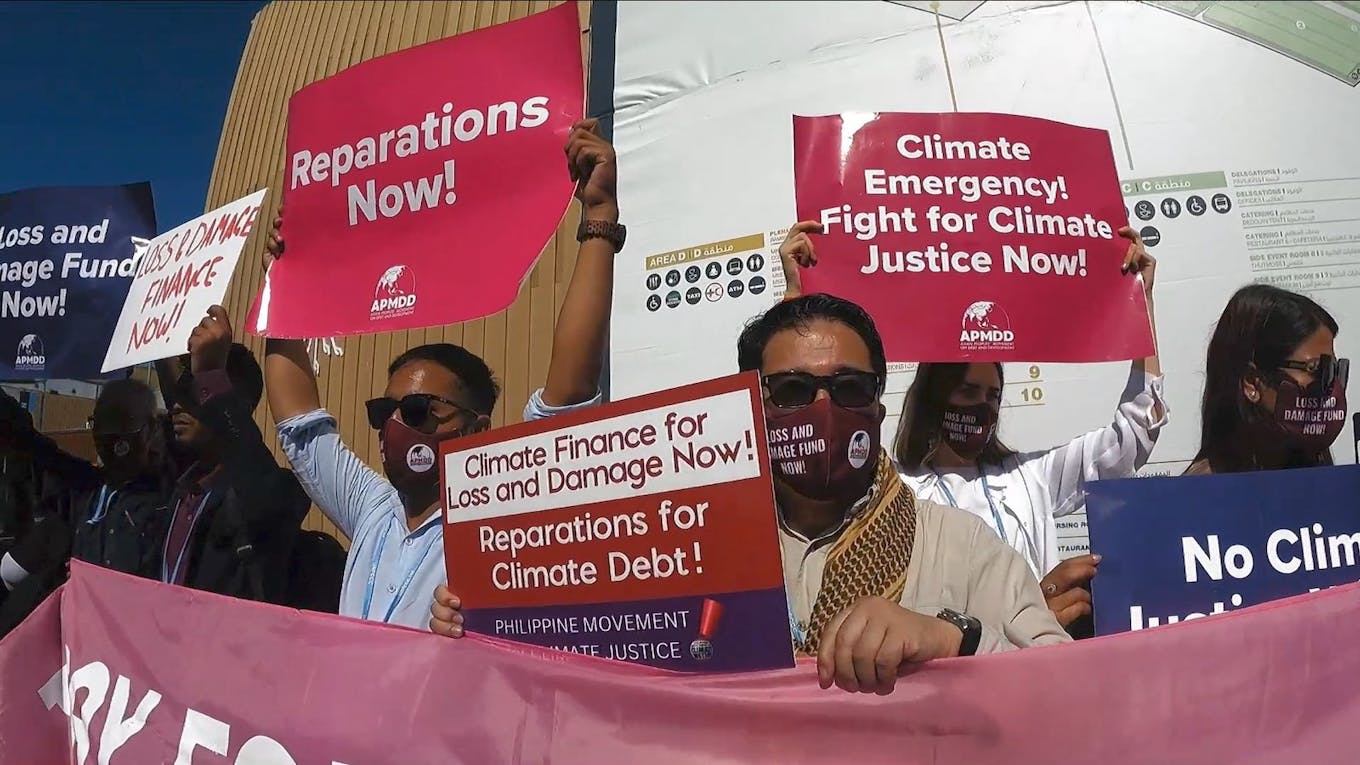 Civil society organisations have been staging daily protests for climate action at the COP27. Image: Asian Peoples Movement on Debt and Development

Dr Fernanda de Carvalho, an energy expert at environmental group WWF, said that it can be assumed that oil producing countries like Saudi Arabia will be “very strongly against” the call to phase down all fossil fuels. Saudi Arabia is the world’s second biggest oil producer after the United States.

In the latest COP27 draft, a further condition also appears to have been added to a clause in last year’s deal to end fossil fuel subsidies. It calls for countries to “rationalise” such subsidies, in line with their national circumstances and the need for a just energy transition.

“We call on the presidency to understand that the success of this COP in Egypt depends entirely on how they treat this issue of fossil fuels, and how they push forward the loss and damage agenda that so many low-lying states need right now,” said Jean Su, energy justice program director at US-based non-profit Center for Biological Diversity.

A civil society leader at the climate talks points to the presence of more than 600 fossil fuel lobbyists registered at COP27 as a source of influence on negotiation outcomes.

“Imagine, these energy lobbyist are talking to ministers, heads of delegations and negotiators to ensure that their agenda finds a place in the text. It is alarming,” said Aaron Pedrosa, secretary general of Sanlakas, a progressive coalition of different marginalised sectors in the Philippines.

The lobbyists are either directly affiliated with fossil fuel corporations, including Shell, Chevron and BP; or attending as members of delegations that act on behalf of the fossil fuel industry, found an analysis by Global Witness, a London-based organisation that investigates environmental and human rights abuses.

United States-based activist group Kick Big Polluters Out said in a statement, “The influence of fossil fuel lobbyists is greater than frontline countries and communities. Delegations from African countries and Indigenous communities are dwarfed by representatives of corporate interests directly at odds with the level of systemic change needed to slow the climate crisis.”

‘Loss and damage’ a likely kingmaker

COP27 president and Egypt foreign minister Sameh Shoukry told country representatives on Friday afternoon that he remains concerned at the number of outstanding issues, including climate finance and loss and damage.

“It is in your hands as heads of delegation and negotiators to push for ambitious outcomes on all elements under consideration. I assure you that as president, I am fully committed to provide all the support,” Shoukry said.

Stalled negotiations on loss and damage, or how to help climate-vulnerable countries recover from increasingly devastating climate disasters that they played little part in causing, received a boost in the early hours of Friday (18 November), when the European Union issued a proposal that received the support of some developing countries.

The EU plan comes with a dedicated loss and damage fund, a key ask of developing countries. The money would be for the most vulnerable countries, a group that could include small island states and the least developed countries in the world, but is ultimately not well-defined in existing global climate agreements.

The bloc also wants a larger donor base compared to an earlier loss and damage proposal by the G77 group of developing countries, which the EU has said wants money to come from a list of developed countries drawn up in 1992. The list excludes countries like Qatar and Singapore, which have some of the world’s highest GDP per capita, as well as China, which has higher emissions than any other country in the world today. China were among countries that pushed back on the EU’s plan.

Countries will also have to peak emissions before 2025 and phase down all fossil fuels in return, as part of the plan. These elements are not included in the latest COP27 decision text draft.

“This is our final offer,” Frans Timmermans, executive vice-president of the European Commission, said on Thursday evening, as Bloomberg news reported.

In a press briefing held on Friday afternoon, Wael Aboulmagd, Egypt’s top climate diplomat, said that the last he heard, the G77 is holding on to their coherent and collective position on loss and damage.

Shoukry said he intends to bring the COP27 to a close on Saturday in an orderly manner, though delegates have also been told that food and transport are guaranteed on Sunday. Talks on several issues like carbon markets and new plans on adapting to growing climate risks are still ongoing.

“Our sense is that most of the pieces are moving foward, and everything really depends on the resolution of the loss and damage issue,” E3G’s Meyer said.