Cloud technology in Asia Pacific is projected to grow dramatically in the next few years, and plays a crucial role in modernising and empowering communities across the region. But it is not without challenges to ensure its benefits are broadly felt.

Cloud technology plays a crucial role in modernising and empowering communities across Southeast Asia, from boosting financial inclusion to streamlining access to formal markets for smallholder farmers, according to a report by Eco-Business Research launched on Friday (19 March). But multiple stakeholders must collaborate to ensure that there is true democratisation of cloud technology across the region.

Cloud technology – the delivery of on-demand computing services through a network of remote servers – is projected to grow by 117 per cent in Asia Pacific between 2019 and 2024, according to GlobalData with more businesses allotting bigger budgets towards it.

Cloud needs minimal infrastructure and investment while it has the ability for companies to operate at scale quickly making it particularly appealing for emerging economies.

Nevertheless, the development and adoption of cloud technology vary considerably across the five focus countries studied in the Eco-Buisness report.

Singapore is a leader in cloud adoption and growth potential, which is underpinned by its robust infrastructure and enabling policies. It is ranked top in the Eco-Business Cloud Opportunity Matrix. Its ‘Smart City, Smart Nation’ initiative places heavy focus on cloud technology to enable a more efficient provision of services and to streamline government systems.

Parking, tax and government platforms allowing you to register births and businesses are powered by cloud technology. “We now have the ability to use data to manage transport systems like never before,” Jamie Leather, chief of Transport Sector Group, Asian Development Bank said in the report. 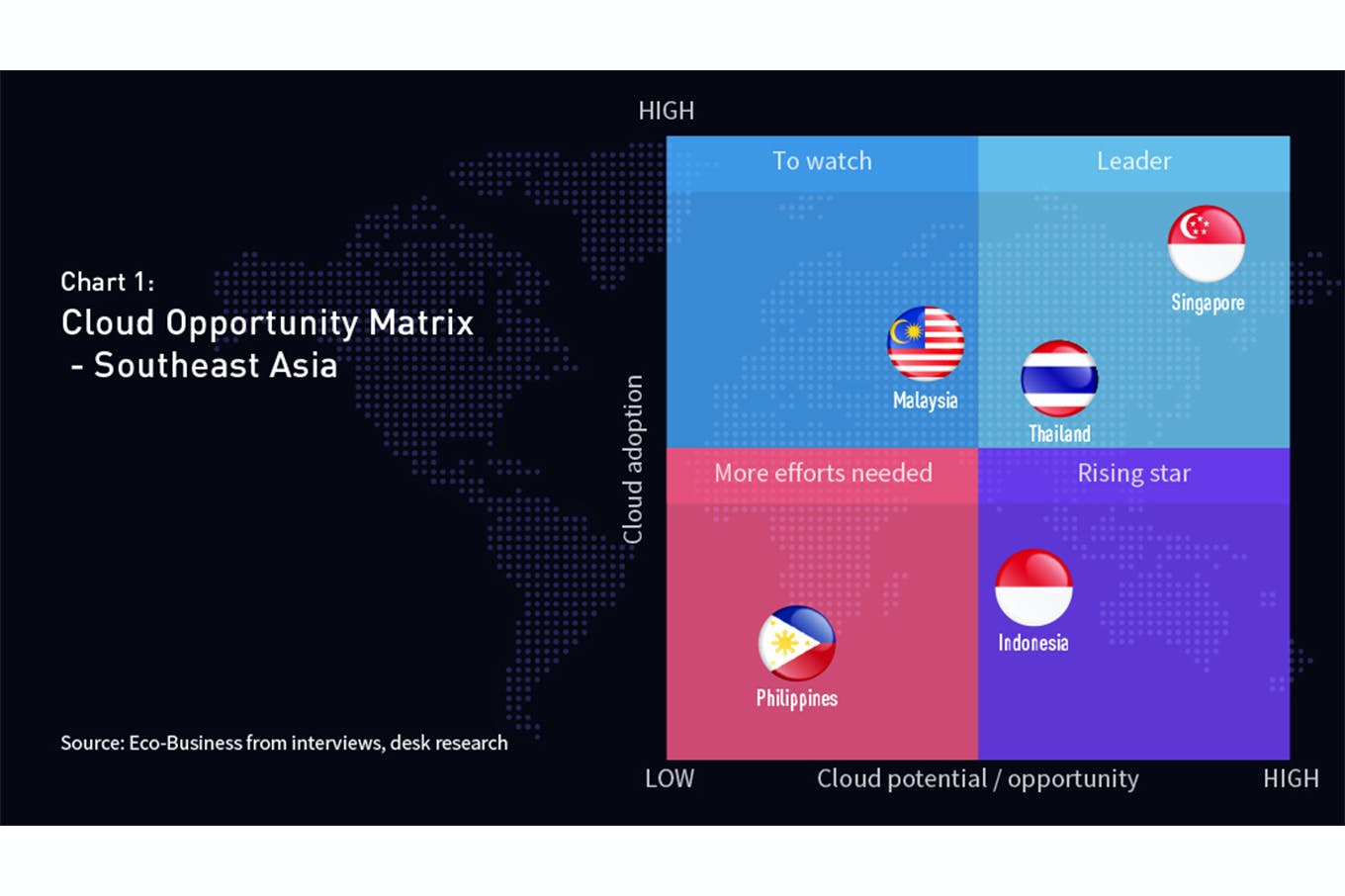 Thailand and Malaysia are ranked next in the matrix, with conducive regulatory environments and relatively high digital penetration at around 80 per cent of the populations in both countries.

Indonesia, the most populous country in Southeast Asia, and the Philippines still have some way to go, the report noted, with both countries lacking the bedrock digital infrastructure needed to propel cloud technology.

Nevertheless, Indonesia is one to watch as it is one of the fastest growing markets for cloud computing, with a thriving digital start-up industry boasting companies such as multi-service platform and digital payment group, Gojek and e-commerce company, Tokopedia.

Growing pains are to be expected as digital infrastructure, awareness and enabling policies develop alongside the uptake of cloud technology.

“Everyone is still on this journey, no-one has a solution for best practice,” said Calum Handforth during a panel discussion launching the paper, and who advises on smart cities and digitalisation for the United Nations Development Programme.

Breaches in data privacy are a headache for both public and private sector entities and could undermine the adoption of cloud technology, despite most providers having robust security systems in place, the report said. Singapore’s digital success story is marred by serious data breaches including one in 2018 when hackers accessed 1.5 million medical records, including those of Prime Minister Lee Hsien Loong.

“Governments are upskilling their ability to understand the discussions around privacy and security,” May Ann Lim, executive director of Asia Cloud Computing Association, said in the report.

Cloud technology is in a strong position to be a “force for good” the report said, enabling collaborative cross-border efforts to cohesively deal with cybercrime. However, borders must stay open to allow cloudtech to maximise on trade and economic opportunities. The report suggests the creation of a “common set of principles governing cross-border data flows” will boost economic competitiveness collectively as a region.

The report said that the digital divide is a major impediment to cloud technology. Some in Southeast Asia are being left behind in the race to digitise with stuttering power supply and unstable internet provision in developing markets including the Philippines and Indonesia.

Even in markets with high internet provision, “policymakers and digital service providers need to address the disparity between different segments of society,” the report charged. Meanwhile, improving computer literacy is instrumental in ensuring cloud technology is inclusive of all.

The report showcases several examples of best-practice in the region. Indonesia has rising potential in using cloud technology to help support and modernise agribusiness. “The farm-to-customer model has also helped the industry address the ongoing problem of multiple middlemen who typically take a 10 to 15 per cent margin each,” according to the report.

There is potential for smallholders to tap into the e-commerce market using cloud-powered apps as the country’s growing middle class opts for online shopping over the traditional open-air ‘wet’ market, Purnama Adil Marata, an expert in agribusiness in Indonesia told the panel. Meanwhile, cloud-powered innovations can “make modern farming more inclusive for the smallholder farmer,” Marata added.

Cloud has also played a part in facilitating access to finance for smallholder farmers in Southeast Asia, home to one of the world’s largest unbanked populations. By leapfrogging bricks-and-mortar banking, Indonesia’s farmers, one of the poorest groups in the region that would be ordinarily regarded as high-risk borrowers by traditional financers, can tap into micro-loans as well as agricultural cooperatives where farmers can pool their resources.

“These cloud-enabled lending platforms have also provided farmers with legitimate and safer alternatives to predatory loan sharks,” said the report.

More collaboration is needed in the region to maximise cloud potential. “For this to work, it requires more than just technology…you need to combine it with leadership,” Jane Treadwell from Amazon Web Services said during the panel discussion, whose backlog of experience also includes the digital transformation of governments for the World Bank.

Greater collaboration is needed between government, the private sector, academia and customers to ensure democratisation of the cloud, and that the benefits of this technology can help the most vulnerable people in the region. “Without partnerships, collaborations, we have nothing,” Akanksha Bilani, regional alliance head at Intel told panellists.