Surbana International Consultants's marine-themed urban design in the Chinese city of Rizhao shows that industrial cities can co-exist with nature through careful planning.

For decades, the Chinese port city of Rizhao in the Shandong province has been one of the country’s major gateway for grains, wood, cement, coal and iron ore trading across the Yellow sea. Today, as it develops, its leaders hope to avoid the mistakes of other cities whose breakneck speed of urban growth has put great pressure on air quality, forests, land and water resources.

Today, Rizhao is building a future around the concept of an ‘ecological city’. It has made massive investments in solar energy and has replaced coal with methane gas from agricultural and industrial wastewater to power more than 15,000 households.

Rizhao’s leaders are also taking the city’s growth in a new direction with Rizhao International Ocean City, an economic development zone which the government is promoting as an attractive, sustainable urban centre more attuned to the richness of its natural marine resources.

Singapore’s leading urban planning and design firm Surbana International Consultants has been involved in helping Rizhao achieve these goals and has crafted the masterplan for the new city. The firm’s expertise in planning and designing cities has been tested over time with its 50 years of involvement in developing public housing projects in Singapore.

Its objective in Rizhao is to create an architectural feat that is in line with the city’s vision of an industrial hub integrated with a sustainable marine economy, from producing food and cosmetics using marine products, to aquaculture, tourism, and marine engineering, to name a few.

“In an increasingly tight urban living environment, landscape is now important in any development. It not only enhances a development project’s visual landscape to attract potential homebuyers, but more importantly, it helps in reducing urban heat island effect,” he tells Eco-Business in a recent interview.

Urban studies have shown that introducing more green spaces such as parks in cities can help mitigate the urban heat island effect or the warming of cities caused by human activities.

Surbana’s urban design for Rizhao aims to build a “strong city brand” based on the firm’s successful models of liveable cities in many parts of the world, including Singapore, Brunei, Malaysia and Vietnam, among others.

The firm said its masterplan highlights Rizhao’s historical and natural landscape, incorporating the important role for its mountains, rivers, city, sea and people in the building of a new vibrant cityscape.

The Rizhao International Ocean City Masterplan is consistent with China’s plans to establish a Blue Economic Zone in the Shandong Peninsula. Oliver Ng, Surbana’s vice president for landscape architecture, says the project is a good example of urban planning that highlights a city’s distinctive natural and cultural heritage.

The design should allow nature to do its own work as much as possible…A well designed site should do more than just the 3Rs - recycle, reduce and reuse; it should also be able to rejuvenate the land, allow the groundwater to recharge as well as protect the area’s biodiversity.

By integrating the green garden and blue ocean themes, Surbana is creating a city that is in keeping with its natural environment, while also offering comfortable and liveable modern lifestyles for its residents, explains Ng.

A central attraction in the masterplan is the building of an iconic landmark called One Ocean World – a marine-themed urban space which humanises industrial production by integrating areas for human interaction with the ocean into the design - from surfing to sailing to diving and beach strolling, among other activities.

One Ocean World showcases four main landscape zones - One Ocean Boulevard, One Ocean Waterfront, One Ocean Ring, and the One Ocean Wetlands - each with their own distinctive sustainable features.

Nature takes care of itself, playing an active role in the maintenance of the features. For example, at One Ocean Boulevard, a bio swale or natural vegetation is placed along the driveway, instead of traditional concrete drains. “This is a natural way of treating and discharging water,” Ng says.

Water plants are also planted along the platform edges at One Ocean Waterfront to help cleanse shallow water and at the same time, extend the green spaces in the area.

Sustainable landscapes should be self-sufficient, Wee notes, adding that the design should incorporate minimum input in terms of potable water and energy.

“The design should allow nature to do its own work as much as possible, in terms of drainage, application of fertilisers, among others,” he emphasises. This is what Surbana is expecting to eventually see in Rizhao. 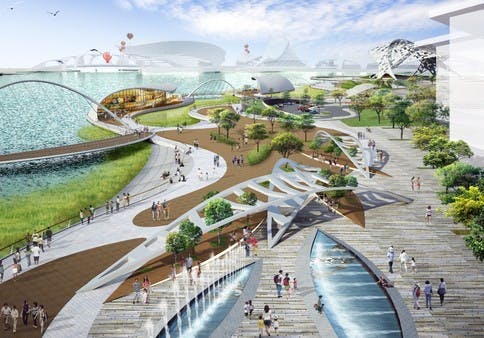 For One Ocean Ring, Surbana has designed the area to offer a series of parks and green open spaces acting as ‘green lungs’ surrounding One Ocean World.

Meanwhile, One Ocean Wetland is designed to bring back biodiversity into the city, while also providing the platform for environmental education and help build awareness on the environment issues in China to engage locals in improving it.

Wee comments: “A well designed site should do more than just the 3Rs - recycle, reduce and reuse; it should also be able to rejuvenate the land, allow the groundwater to recharge as well as protect the area’s biodiversity.”

Surbana has completed projects in more than 30 countries and 90 cities worldwide. In its early days, the firm’s designs focused on better ventilation, reducing glare in window panes to reduce heat and more spaces for community engagement, recalls Wee.

Now, the firm is going further by emphasising the use of recycled construction materials, being more mindful of a building’s energy usage and making sure landscapes work well for the environment, explains Wee, who has led the drive for sustainable design in Surbana since 2008.

Using two of their green-certified projects, Surbana International Consultants seeks to prove that building sustainably does not necessarily require high upfront costs and can lead to greater benefits in the long run
Busting the myth of costly green buildings

Surbana International Consultants launches three books that showcase the best of its sustainable design projects across the globe. It draws its experience from decades of designing and building public homes for Singapore, also known as 'the little red dot'.
Surbana's design footprints - red-dotting the world