Manila Electric Co and San Miguel Corp lead the country’s energy giants in increasing their coal portfolios, locking in consumers to rely on the fossil fuel over the next few decades, a Greenpeace report has revealed.

Coal expansion by the Philippines’ biggest energy companies could lead to the fossil fuel’s share of the energy mix growing from 52 per cent today to a whopping 75 per cent by 2025.

Using government data, environmental advocacy group Greenpeace identified how four of the country’s biggest conglomerates are set to substantially increase their coal portfolios. Should all their proposed coal projects in the next two to six years be pushed through, the Philippines’ coal capacity will more than double, Greenpeace said in its new report, Dirty Business. By 2030, coal supply would be more than twice its 2015 level.

The plans of Meralco PowerGen Corporation, San Miguel Corporation, Aboitiz, and DMCI Holdings will cause the Philippines’ coal supply to grow by 6.2 per cent annually under the business-as-usual scenario of the 2016-2030 Philippine Energy Plan.

Coal—the single biggest source of global warming—currently represents 52 per cent of the country’s energy mix, followed by renewable energy at about 22 per cent and natural gas at about 21 per cent.

“If all proposed coal-fired power plants are approved in the next five years, coal will represent at least three-fourths of the country’s energy mix,” Greenpeace campaigner Khevin Yu said at the launch of the study last Friday in Quezon City, Philippines. 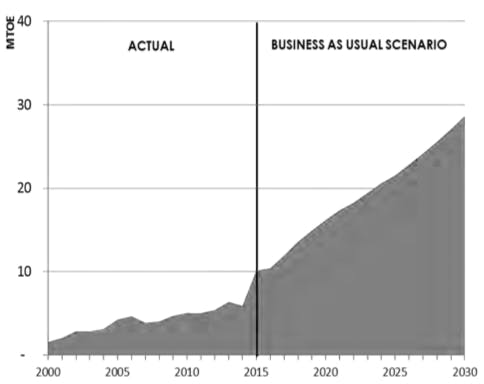 Total coal supply will increase at a faster rate of 6.2 per cent annually, rising by more than twice its 2015 level of 11.6 million tonnes of oil equivalent (MTOE) to 28.1 MTOE in 2030 due to new coal plants. Image: Department of Energy

The Manila Electric Co—the country’s largest power distribution utility through its subsidiary, Meralco Powergen Corporation (MGen), established in 2010—has the most coal projects under construction. Its proposed 5,470 megawatts (MW) is a 672 per cent increase from its current coal capacity.

Together with San Miguel Corporation, whose flagship product is the nation’s most popular beer, they account for 67.8 per cent of all current coal proposals.

Greenpeace called for the companies to halt all coal expansion plans before phasing out existing capacity and replacing it with renewable energy.

It also urged President Rodrigo Duterte’s administration to order a moratorium on all new coal power plants, for the Department of Energy to prioritise renewables as the country’s main energy source and remove financial incentives and other forms of support for coal.

If all proposed coal-fired power plants are approved in the next five years, coal will represent at least three-fourths of the country’s energy mix.

When contacted, two of the energy companies told Eco-Business that the country still needs coal to meet its energy requirements.

San Miguel spokesperson Mary Jane Llanes said the company continues to invest in coal because the country is “not yet ready” to give it up.

Llanes told Eco-Business: “We are not saying coal is bad, we’re not saying it is good. But it is what we need for now to meet the energy needs of the nation.”

The 32-page Greenpeace report details how Meralco has the most coal projects in the pipeline, followed by San Miguel Corp, contrasted by scant proposed renewable energy projects. Among the top energy firms, Lopez Group is the only one with no existing and proposed coal projects after it announced its divestment from dirty energy in 2016. Image: Greenpeace

- MGen has partnered with Redondo Peninsula Energy Inc for a 600 MW coal project in Subic, a former military base converted into a tax and duty-free zone. The energy arm of Meralco also has pending projects like  two 350 MW facilities in Calaca, Batangas, a 500MW supercritical power project in Quezon, and four 150 MW plants in Mariveles, Bataan, which would bolster its coal portfolio to 5,470 MW of installed capacity—the largest among all energy companies.

- San Miguel Corp, which owns a full spectrum of power businesses through its subsidiary SMC Global Power Holdings, is pushing through with its planned 150 MW coal-fired power plants in Pagbilao, Quezon and in Mariveles, Bataan despite protests from environmentalists. It has a planned capacity of 900 MW in Limay, Bataan which has been slapped with violations after residents have blamed its emissions for skin and respiratory ailments.

- Aboitiz, owned by one of the Philippines’ richest families, is engaged in power generation through its energy subsidiary, Aboitiz Power Corporation. In May, it acquired AC Energy Inc.’s thermal platform, which included the purchase of GNPower Dinginin Ltd. Co., the developer and owner of a 1,336 MW supercritical coal plant project in Dinginin, Bataan which is currently under construction. This added to its 3,638 MW coal capacity, making it the company with the largest existing coal portfolio in the country.

- DMCI expanded its business from real estate to the energy and mining sectors through the Semirara Mining and Power Corporation (SMPC). It has a proposed 700 MW coal-fired power project in Calaca, Batangas, growing the company’s current coal capacity of 900 MW.

Meralco spokesperson Joe Zaldarriaga said the company cannot move completely away from coal because renewable energy facilities are “not yet reliable”.

“It is our duty to provide reliable supply in the least-cost manner. At the moment, coal power plants can provide this while renewable energy plants still continue to depend on subsidies from consumers and government mandates like the Renewable Portfolio Standards,” Zaldarriaga told Eco-Business.

The Renewable Portfolio Standards is a government policy where power distribution utilities are mandated to source a minimum portion of energy from renewable sources to guarantee a market for renewable energy producers.

The government earlier said the minimum requirement to source renewable energy will be increased gradually every year, but with no specific timelines.

“Solar and wind are reliable, already providing energy in the Philippines. What is missing is giving right investment in these technologies,” Arrances told reporters at the report’s launch.

He blamed “pro-coal government incentives” as one of the main drivers of the fossil fuel in the country, which is predicted to have the highest share of coal in the power mix for Southeast Asia in 12 years.

He said that government policies like the Coal Mining Development Act of 1976 should be reviewed, as it allows coal operators to recover their operating expenses up to 90 per cent of its gross income, making it attractive to investors.

He also called for “real competition” between energy sellers and buyers where coal comes out as cheaper energy because of “hidden costs” during the bidding process.

He cited how the Panay Energy Development Corporation signed a deal in 2016 to deliver coal-fired power at 3.96 Philippine pesos per kilowatt hour (KWh), when the actual cost to customers was 37 per cent higher at 5.41 pesos per KWh.

“There should be a level playing field between coal and renewable energy players. In the bidding process, there are hidden costs based on foreign exchange and adjustment of fossil fuel in market that make coal look cheaper. That is the reason why coal is competitive,” Arances told Eco-Business.

Aboitiz has the largest existing coal portfolio, comprising 61.9 per cent of its 5,874.4 MW total capacity. Ironically, it also has the largest renewable energy mix, with a total of 1,605.1 MW of hydroelectric, geothermal, and solar power. Image: Greenpeace