Asia’s climate arsenal: are biofuels back?

Biofuels will dominate future growth in renewables and are essential for decarbonising the most difficult sectors; China and India should lead the way, argues new EIA report.

Bioenergy made up half of all renewables consumption in 2017 – four times solar PV and wind combined – and has a huge untapped potential, says the International Energy Agency (IEA) in its new annual report on renewables.

Bioenergy from liquid biofuels and biogas will continue to lead growth in renewable energy consumption to 2023, due to its rising use in the heating, shipping and aviation.

“Its share in the world’s total renewables consumption is about 50 per cent today, in other words as much as hydro, wind, solar and all other renewables combined. We expect modern bioenergy will continue to lead the field, and has huge prospects for further growth. But the right policies and rigorous sustainability regulations will be essential to meet its full potential.” 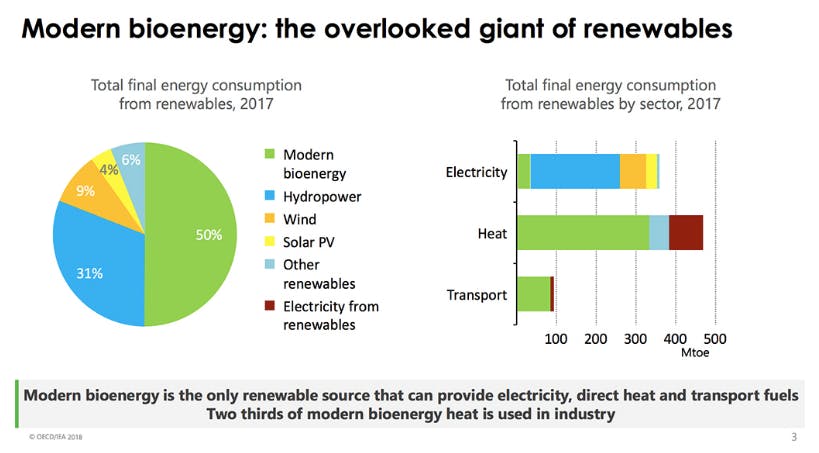 We are totally aware of the controversial reputation of bioenergy, especially deforestation of tropical forest and prioritisation of fuel over food.

Renewables are set to account for almost a third of world electricity generation in 2023, according to the EIA. But expansion lags behind in the transport and heat sectors, where supportive policies from governments around the world are now urgently needed.

So far, disproportionate attention has been given to greening the electricity sector, which only accounts for about 20 per cent of overall emissions. The real battle against climate change is now playing out over heating, shipping and aviation and dirty industrial processes.

This is where bioenergy can play an essential part, argues the IEA report. 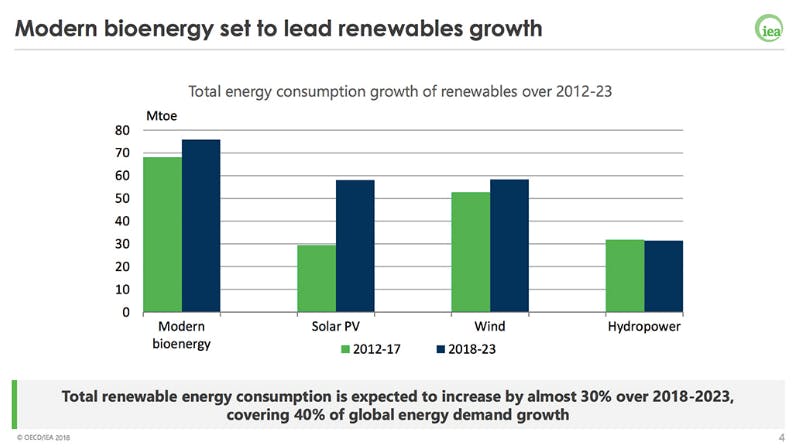 Cement – one of the most polluting processes in the world accounting for 5-8 per cent of global emissions  – holds the largest potential according to the IEA, as two-thirds of the bioenergy used in this industry is from waste. “Robust waste management in key cement-producing countries could therefore double the share of energy demand met by bioenergy and waste to 13 per cent by 2023,” the report states.

In the EU, bioenergy and waste meets one-quarter of energy demand of cement production. However, most of the world’s cement is produced outside the EU – in China and now increasingly elsewhere in Asia and these are the countries that will need to adopt policies to promote biofuel to industry.

Biofuels can also play an important role in greening aviation. Biofuel demand in the aviation sector is growing, mostly driven by voluntary initiatives. However, the cost is still prohibitive (about 40 per cent higher than oil).

With the right policies, the IEA estimates biofuels could make up 2 per cent of the sector’s energy demand by 2025. This would show the potential to scale up its use commercially, and could replicate the success of PV solar, the IEA believes.

Ten years ago, biofuels were seen as ideal low-carbon replacements for the liquid fossil fuels that power the majority of the world’s transport systems.

But concerns grew that first-generation biofuels, made from food crops (such as palm oil, soybean, rapeseed and sunflowers), were destroying forests and agricultural land, increasing food prices and were often as polluting as fossil fuels when all factors in their production were considered.

Today’s biofuel proponents argue it’s about using the right kind of biofuels. Many of the next generation biofuels are different, relying on use of waste products from agriculture and industry.

For example, the production of biomethane from waste and residues, production of heat for district heating networks, biodiesel made from waste oil and animal fats, or cellulosic ethanol produced from grasses, wood or straw.

These, some experts claim, could create truly sustainable fuels by reducing the need for fertilisers, cropland and processing energy.

But so far uptake of these new technologies is low – and some are not yet fully developed or commercialised. The IEA report suggests that without major policy shifts novel advanced biofuels will only account for 1 per cent of all biofuel output by 2023.

It calls for countries to develop specific policies to support biofuel research, development and deployment, including creative financial and market mechanisms.

Half of global production growth is forecast to happen in Asian countries, mainly China, India and Southeast Asia, where ample feedstocks and the desire to increase energy security have led to greater policy support.

New policy schemes in India and China are anticipated to significantly boost the market for biofuels.

For example, India recently announced a new national biofuels policy that allows ethanol production from agricultural waste and crops residue such as corn, cassava and sugarcane.

This could boost farmer income and help address the horrendous pollution that engulfs Delhi and much of northern India every winter, caused by the annual burning of crop stubble, which could otherwise be turned into energy.

Two thirds of the EIA’s projected biofuel expansion still depends on food-based products and so concerns over land and good security will only grow. The new study from the Intergovernmental Panel on Climate Change (IPCC) warns, “Bioenergy may compete with other land uses and may have significant impacts on agricultural and food systems, biodiversity and other ecosystem functions and services.

Effective governance is needed to limit such trade-offs and ensure permanence of carbon removal in terrestrial, geological and ocean reservoirs.”

The IPCC report warns of the radical changes needed to the way we produce energy, food and move around in order to limit global warming to 1.5°C and avoid catastrophic climate change.

“We are totally aware of the controversial reputation of bioenergy, especially deforestation of tropical forest and prioritisation of fuel over food,” said Paolo Frankl, head of the IEA’s renewables division.

Most of the projected the bioenergy expansion will come from using waste and residue from industry and agriculture.

They are not presuming a growing use of land [for biofuels], but using the same amount of land while increasing productivity, Frankl explained. Designing effective certification and auditing schemes will be crucial to encourage sustainable bioenergy production.