It's election season in Asia. Thailand went to the polls last month, with India, Indonesia and the Philippines to follow. Eco-Business finds out whether sustainability is an election issue in the world's most populous region.

Voters across Asia are most likely to usher in governments that take a stronger stance on climate change and other environmental issues, according to several surveys released in the lead-up to national elections taking place in the region.

Months before Filipinos cast their ballots on 13 May, a survey published by environmental watchdog Greenpeace and polling institution Social Weather Station (SWS) showed that a majority of the Philippines’ voters will vote green, with 73 per cent of Filipinos expressing support for candidates that want to ban single-use plastic in stores, restaurants and government offices, while 82 per cent wants a government that will implement stricter laws on waste management.

In India, while voter priorities revolve around bread and butter issues such as employment and basic healthcare, environmental issues like air and water pollution were also high on the list of concerns for urban voters, according to a survey released by the non-government organisation (NGO) Association for Democratic Reforms (ADR).

However, despite rising concern from the Asian populace over the state of the environment, clear policies that address climate change and major environmental issues such as deforestation, air quality and water mismanagement are still largely absent from electoral campaigns, with politicians pandering to typically populist issues linked to religion and unemployment.

“Considering Indonesia is a developing country, economic development is still the dominant issue for both candidates,” said Arief Wijaya, senior manager of Climate and Forests at World Resources Institute (WRI) Indonesia. “Yes there is an effort to address environmental and climate change issues, but how the sustainability agenda will be implemented after the elections is still a big question mark.”

Ahead of elections in Indonesia and the Philippines, two of the largest nations in Southeast Asia, Eco-Business finds out whether climate change and sustainable development rank high on the priorities list for the countries’ political candidates.

How the sustainability agenda will be implemented after the elections is still a big question mark.

Imee Marcos, currently the governor of Ilocos Norte in the northern part of the Philippines, wants to address the country’s skyrocketing gasoline and electricity prices by reducing dependency on fossil fuels; the Philippines is one of the most coal-dependent economies in Southeast Asia.

The daughter of late dictator Ferdinand Marcos told Eco-Business that she plans to push wind energy to the rest of the country, replicating what has been done in Ilocos Norte.

Ilocos Norte boasts of having the biggest wind farm in Southeast Asia, generating  283 megawatts of electricity. The province also has solar projects that produce 26.7 megawatts and a 5-megawatt hydroelectric plant.

Not to be outdone is Marcos’ fiercest rival, incumbent senator Paolo Benigno “Bambam” Aquino  who has put forward zero food waste as part of his campaign.

The nephew and namesake of Senator Benigno “Ninoy” Aquino Jr. has filed a zero food waste bill that aims to facilitate the transfer of excess but clean food from restaurants to food banks.

The model is based on legislation drafted in France where businesses are required to send scrap food to waste management plants to be used as fertiliser.

Another re-electionist pushing a green platform is Cynthia Villar, who currently ranks two in the polls.

Married to the Philippines’ richest man on the Forbes 2019 list, Villar is chairperson of the Committee on Environment and Natural Resources, which took part early this year in the massive rehabilitation of Manila Bay, a popular landmark for watching the sunset that is also infamous for sewage from slum areas and toxic waste from shipping ports nearby.

When she was still a congresswoman, the housing billionaire also spearheaded the clean up of a 56-kilometre stretch of two major interlinked rivers called the Las Pinas-Zapote River System, earning the project recognition from the United Nations.

An estimated 6.3 million Filipinos are expected to head to the polls in the upcoming midterm elections in May, where the highest national positions up for grabs are 12 seats in the Senate.

While the economy remains the main election issue in a country with an inflation rate hitting a nine-year high last year, a social research institution revealed that candidates with environmental agendas are likely to be supported as well.

“It is no longer just about gut issues like poverty, jobs, and livelihoods. Environmental issues are already popular with Filipinos,” Vladymir Licudine, deputy director for surveys at SWS, told Eco-Business. “This is not an end-all survey. It just shows that the chances of voting for a candidate who will advocate this is quite high. But a voter will consider other factors as well.”

Political analyst Clarita Carlos disagreed with the results of the survey.

“I do not think environmental concern is an election issue at all unless it is presented as a water shortage or electricity outage issue,” said Carlos, executive director of local think tank Center for Political and Democratic Reform, Inc.

“Even presented as such, there is a very small section of the electorate who will convert it to votes in the polls,” she told Eco-Business.

Meanwhile, Ramon Casiple, executive director of NGO Institute for Political and Electoral Reform, noted that environmental issues have been highlighted in recent years in the country.

Casiple cited how the closure of mines in Surigao in the southern part of the Philippines affected the livelihoods of residents, as did the rehabilitation of popular tourist spot Boracay. Its six-month closure after President Rodrigo Duterte declared the island a “cesspool” lead to the loss of jobs and revenue for the resort.

“The closure of these areas was carried out in the context of sustainability. Environmental issues have become gut issues because they have survival implications,” Casiple told Eco-Business.

It is no longer just about gut issues like poverty, jobs, and livelihoods. Environmental issues are already popular with Filipinos. 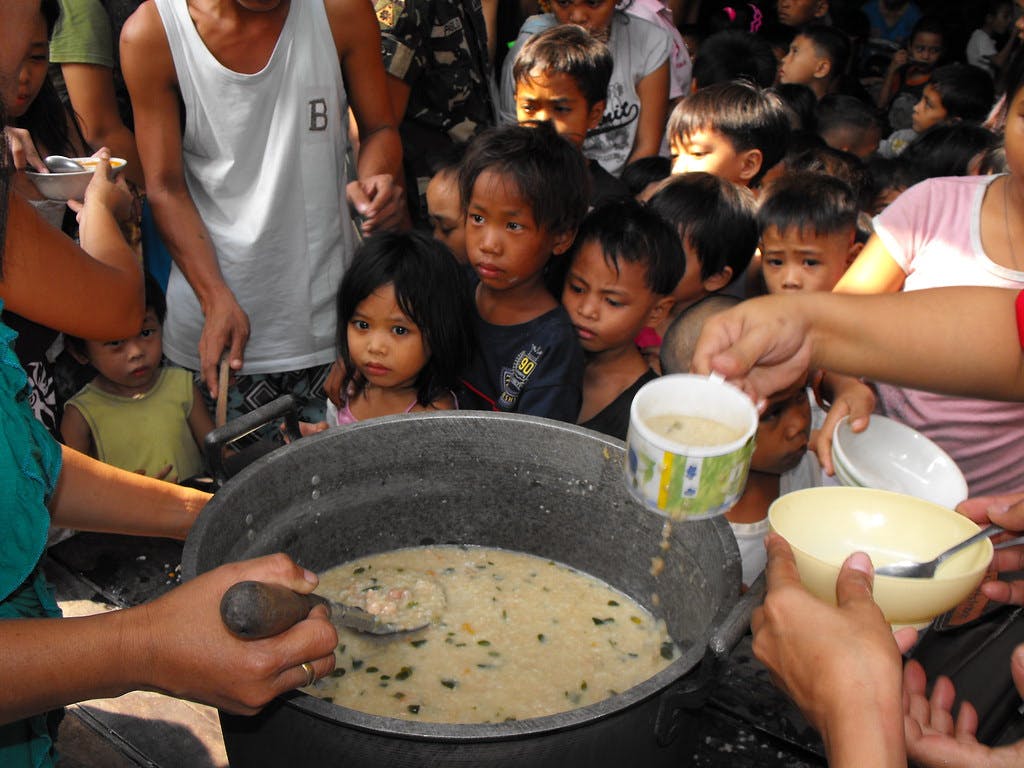 95 children in the Philippines die daily from malnutrition, according to the United Nations Children’s Fund. The zero food waste bill aims to fill this gap with ‘unsold, unserved, edible’ food from restaurants, while recycling uneaten food to organic waste. Image: Feed My Starving Children

Since his election win in 2014, incumbent president Joko Widodo, popularly known as Jokowi, has rolled out unprecedented measures on peatland restoration and the prevention of forest fires.

Other than declaring a freeze on peatland conversion and new palm oil permits on the heels of the 2015 haze crisis, Jokowi also formed the Badan Restorasi Gambut, or Peatland Restoration Agency, to work on the restoration of degraded peatland.

Up for re-election this year, Jokowi is pushing for more monitoring and enforcement of the environmental laws he has either enacted or extended during his term.

In his 2019 platform ‘Indonesia Maju’ (Indonesia Moving Forward), he and running mate Ma’ruf Amin promise stronger action on the management of hazardous waste and plastics.

There appears to be no new policies on the issue of climate change, with mitigation still focused on conserving peatland, developing renewable energy and introducing eco-friendly transportation and green spaces in urban areas.

In a presidential debate, Jokowi revealed plans for vehicles to run on fuel that is 100 per cent derived from palm oil, a controversial move that environmental groups say will undermine efforts to combat palm oil expansion in Indonesia.

The debate was met with disappointment by local experts, with a researcher at the Research Center for Climate Change at the University of Indonesia, Sonny Mumbunan, commenting in an article: “Throughout the debate, not one presidential candidate touched on climate change. It’s difficult to discuss food, energy, the environment, infrastructure and natural resources in Indonesia without addressing climate change.”

Reidinar Juliane, communications specialist at WRI Indonesia, echoed his thoughts: “Topics like renewable energy and palm oil were brought up but none linked them to climate change or sustainable development. None of them talked about mitigation or adaptation efforts on climate change.”

On the extent to which voters were demanding for policies related to climate change, she added: “Environmental awareness is on the rise, but we’re not quite there yet on other deep environmental issues.”

Although deforestation is a major issue in Indonesia, both Jokowi and Prabowo have not included specific calls for stronger forest protection in their electoral campaigns.

Prabowo has expressed his vision of transforming Indonesia into a leader in bioenergy by converting 88 million hectares of damaged forest to cultivate crops such as cassava, sorghum and palm sugar for the production of bioethanol.

The Jokowi government has taken a nationalist stance on the European Union’s decision to phase out the use of palm oil in biofuels by 2030, with maritime minister Luhut Pandjaitan recently threatening to pull Indonesia out of the Paris Agreement.

Furthermore, while Indonesia has been expanding its renewable energy capacity, its efforts towards clean energy are mired by the country’s continued investment in coal, which currently makes up a quarter of its energy mix.

“After the elections, we might see a reduction or elimination of the fossil fuel subsidy. With the exception of coal, we’ll have a clearer direction what energy policies will be enforced with the new government,” Mari Pangestu, Indonesia’s former minister of tourism and creative economy, told Eco-Business. 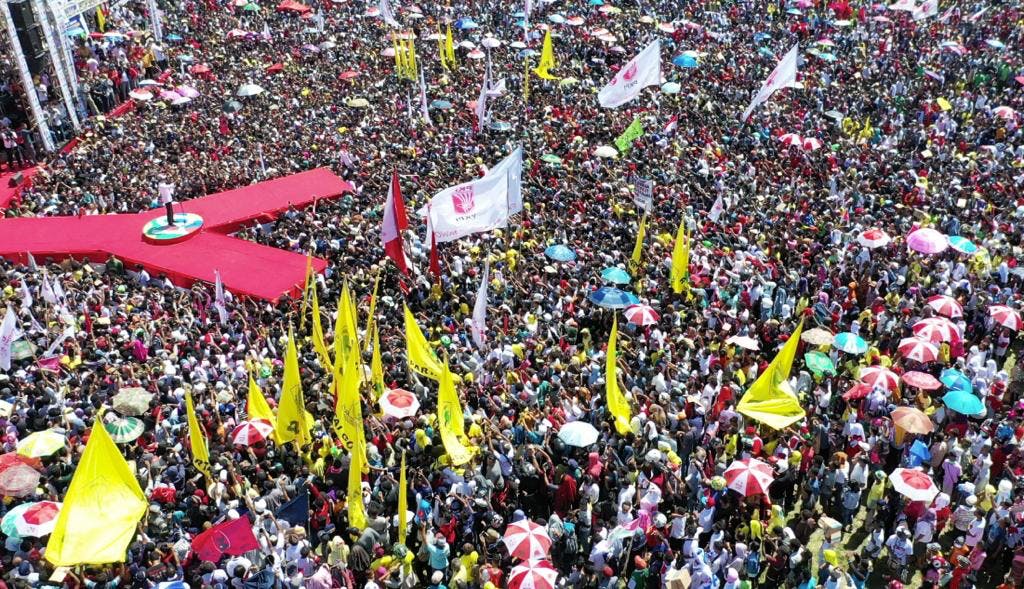 “On climate change, we don’t have that strong political support yet, and it won’t be discussed except peripherally. It will, however increasingly become a political issue,” she said.