A surge in carbon emissions and failure to comply with hazardous waste policies are hindering Asia's progress towards the sustainable development goals. The degradation of its environmental resources is 'alarming', says the UN.

Asia Pacific is failing to meet most of the measurable environmental targets set by the United Nations, revealed a report released on 25 March on the region’s progress towards achieving the Sustainable Development Goals (SDGs).

The region is struggling the most with two SDGs: advancing responsible consumption and production (Goal 12) and climate action (Goal 13), the United Nations Economic and Social Commission for Asia and the Pacific (ESCAP) found in its analysis of data from 2000 to 2019 across 58 countries.

The SDGs are a series of targets to tackle global issues such as poverty, hunger, climate change, and gender equality by 2030.

In its Asia and the Pacific SDG Progress Report 2020, ESCAP found that the share of renewable energy in Asia Pacific, at 16 per cent, is one of the lowest globally. The region emits half of the world’s greenhouse gases, and the number has doubled since the year 2000, from 12.4 billion tonnes of carbon dioxide-equivalent to 21 billion tonnes in 2017. And about a-third, or 35 per cent, of its countries continue to lose their forests, driven in part by demand for key commodities like palm oil, soybeans, timber, and pulp and paper from developed nations. 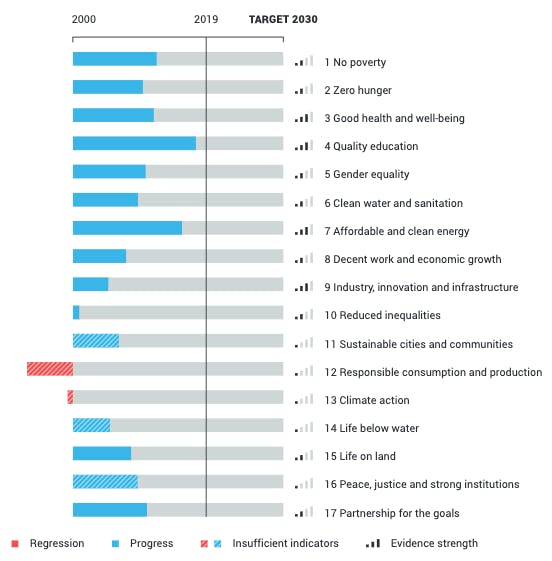 The UN ESCAP report showed a snapshot of where Asia Pacific currently is in meeting its SDG targets. The chart shows that the region is progressing for 11 of the goals, stagnant for four, and regressing for two. Image: UN ESCAP

The region is also regressing in its management of chemicals and waste, failing to achieve its international commitments for hazardous waste management.

Less than 20 per cent of countries in the Asia Pacific comply with the Basel convention, an international agreement banning the export of hazardous waste, noted Arman Bidarbakhtnia, ESCAP’s head of statistical data management and one of the report’s lead authors.

Although hazardous waste is prohibited from entering Southeast Asian countries like the Philippines, Malaysia and Indonesia, foreign toxic waste continues to be dumped in their territories under the guise of recyclable waste.

It’s really alarming how a region with the world’s highest economic growth is also contributing the most in environmental degradation and use of natural resources.

As for its regression in climate action, the report noted that Asia Pacific is emitting half the world’s carbon dioxide, nearly two-thirds of which are from coal. Two of the world’s most populous countries, China and India, are also among the three largest greenhouse gas emitters.

Not only has Asia doubled its greenhouse gas emissions, the continent is also home to the majority of the world’s 100 most polluted cities, as measured by the level of fine particulate matter, or PM2.5.

“It’s really alarming how a region with the world’s highest economic growth is also contributing the most in environmental degradation and use of natural resources,” Bidarbakhtnia told Eco-Business. “We need collective commitments and action to reverse this trend for the 2030 targets to be met.”

Asia Pacific is also off-track for other environment-related goals.

Bidarbakhtnia pointed to the plunge in the region’s share of renewable energy due to a surge in power demand in the world’s fastest growing economies. Clean energy accounted for 23 per cent of the energy mix in 2000, but the figure has dipped to 16 per cent, he said.

The region is also not faring well in terms of resilience to natural disasters. In 2018, for instance, 24 million people were affected by typhoons and earthquakes, he noted. That year, earthquakes killed more than 800 people in Indonesia alone, and the country also experienced deadly tsunamis.

Asia made more progress on other SDGs including improving the quality of education (Goal 4) and providing access to affordable and clean energy (Goal 7). The report suggested that the two goals can be met by 2030.

For quality of education, Asia achieved its highest score on the percentage of children and young people who have reached a minimum proficiency in reading and mathematics. The frontrunners were Hong Kong, Singapore, South Korea, Singapore and Australia, while Sri Lanka was on par with wealthier nations such as New Zealand and China.

Although the region fared poorly in its renewable energy targets, countries have increased electrification rates, with an estimated 93.1 million more Asians gaining access to electricity between 2012 and 2014.

The region is also making good progress on targets related to economic growth, according to the report. The rate of per capita real gross domestic product growth in the Asia Pacific was more than double the world average in 2017. At the same time, at least 18 countries in the region are experiencing less income inequality, it noted.

Call for more investment in data

Aside from progress on the SDGs, Asia Pacific must increase the data available for various indicators. Although available data has increased to 42 per cent from 25 per cent in 2017, over half of the information on SDG indicators are still lacking, including for responsible consumption and production and climate action.

Other data-poor SDGs are sustainable cities and communities (Goal 11) and life below water (Goal 14), the report showed.

ESCAP said it supplemented the evidence with information from partner agencies like the United Nations Commission on Human Rights and international agencies to fill in the gaps.

“We are as accurate as our data allows us to be. But when we have less data, we have less progress,” Bidarbakhtnia said. “We need to establish meaningful dialogue with data users so that they can demand and invest more in statistics. Data and policy go hand in hand.”