The world's filthiest air is in India, but weighted by population it's worse in Bangladesh. China's notoriously unbreathable air is improving, while Jakarta is in danger of out-smogging Beijing, data from air monitoring stations all over the world has revealed.

Of the 100 most polluted cities in the world in 2018, 99 were in Asia, according to a global report on annual air pollution levels by Beijing-based monitoring firm AirVisual and environmental group Greenpeace published on Thursday.

The world’s largest country, however, has seen improvements in air quality in 33 of its dirtiest cities, thanks to emissions regulations and extensive air quality monitoring. Another 24 Chinese cities saw smoggier skies in 2018.

Eleven Indian cities in the top 100 have welcomed cleaner skies this year, while air quality has become smoggier in eight of them, where a cocktail of bad air from traffic, industry, and agricultural and waste burning contributes to the haze.

Gurgaon, also known as Gurugram, a city southwest of India’s capital, New Delhi, has the world’s most polluted air, with the annual average level of PM2.5—small particles considered the most dangerous to human health—more than 13 times higher than the World Health Organisation’s (WHO) air quality guidelines of 10μg/m3.

How polluted is Asia?

Bangladesh has the world’s worst air weighted by population, followed by Pakistan and then India.

Korea has the worst air among wealthy Asian countries. The country has 44 cities in the top 100 most polluted cities in OECD countries in 2018.

The West China city of Hotan, Xinjiang province, suffered the heaviest air pollution of 2018, when average PM2.5 levels exceeded 300—defined as “hazardous” to human health—in the month of April, largely as a result of sand storms.

Ranking 686th with ‘moderate’ air that is double WHO’s safe limit, Hong Kong’s air improved in 2018, with pollutant levels dropping from 21.8 to 20.2. Singapore’s cleaner air got dirtier, with pollution increasing from 13.3 to 14.8.

Jakarta is Southeast Asia’s most polluted city, Manila is the sub-region’s cleanest.

In the US and Canada, air quality is relatively good, but historic wildfires meant that 5 out of 10 most polluted cities in the world during August 2018 were in North America.

The city of Lukavac in Bosnia Herzegovina, known for its chemicals factories, is the only non-Asian city in the top 100 most polluted cities.

Average concentrations of pollution in Chinese cities fell by 12 per cent from 2017 to 2018.

“Beijing has seen a dramatic drop in air pollution in recent years, particularly in the winter months, largely as a result of factory closures,” he said.

Beijing has seen PM2.5 levels drop from ‘unhealthy’ to the ‘unhealthy for sensitive groups’ between 2017 and 2018.

Four years ago, an air quality reading of around 200 µg/m³ was accepted as “normal” in Beijing, noted Boquillod, who is based in Beijing. In 2018, pollution dropped to roughly a fifth of that level.

However, Beijing air is still almost six times over WHO’s guidelines, and in February this year saw PM2.5 levels climb to a five-year high, up 28 per cent year on year.

Hold your breath, you’re in Jakarta

In Southeast Asia, Jakarta registered the most polluted air in the sub-region last year. The Indonesian capital saw air quality worsen by 53 per cent in a year, one of the biggest drops in a report that covered 3,000 cities all over the world.

Jakarta’s 2018 pollution levels, four and half times over WHO’s target, were just 12 per cent lower than in Beijing’s. The city, which has more coal-fired power stations near it than any capital city in the world and notoriously bad road congestion, hosted the Asian Games in 2018, and athletes collapsed due to the smog. 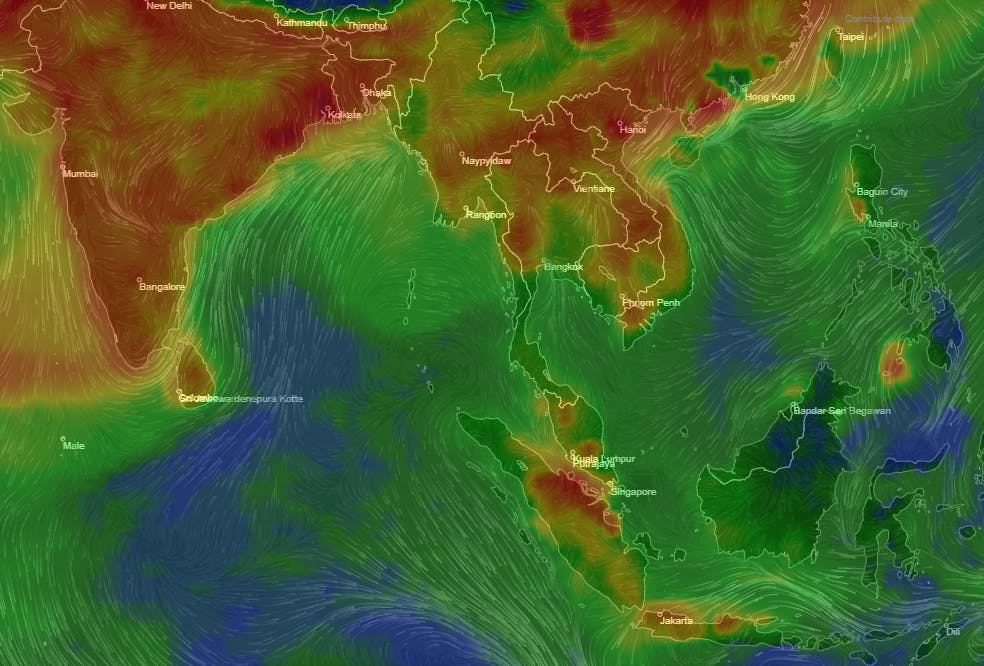 A map of India and Southeast Asia’s air quality from AirVisual Earth on 7 March 2018. Warmer colours indicate heavier air pollution. In Sumatra, air pollution is a result of forest fires.

Malaysia was not included in this year’s report. According to AirVisual, there was not enough data for Malaysia to be represented, as the country only started measuring PM2.5 in the third quarter of 2018. Malaysia will appear in the 2019 report, AirVisual told Eco-Business. 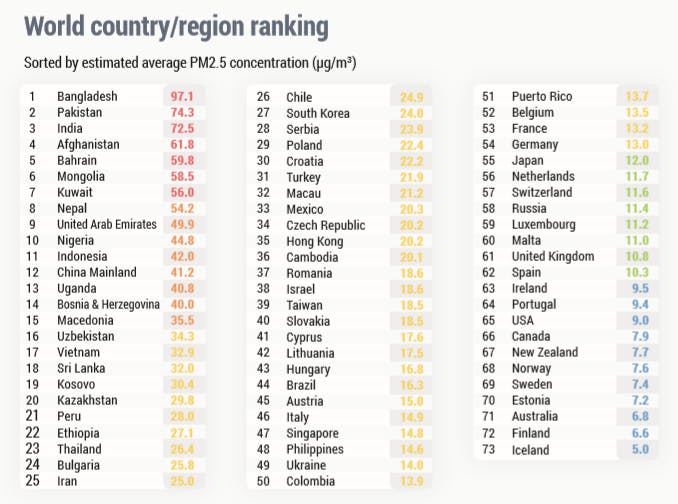 A ranking of countries by air pollution. Source: AirVisual

“What we need to see is our leaders thinking seriously about our health and the climate by looking at a fair transition out of fossil fuels while telling us clearly the level of our air quality, so that steps can be taken to tackle this health and climate crisis,” he said.