The latest power crunch in Sichuan province, brought about by extreme weather, might further push back the expansion of China’s emissions trading system to include major polluters like cement, steel and petrochemicals, say observers.

One year after its launch, China’s much-heralded national carbon market has failed to impose an effective price on emissions, with observers pointing out fundamental flaws in its design yet to be corrected – issues with data reporting, a limited pool of participants, and unclear policies.

To add to the woes, a recent power crunch in Sichuan, triggered by a long and unusual drought across the Yangtze River basin that crimped electricity supply, is expected to indirectly derail plans to expand the scope of China’s emissions trading scheme (ETS), its national carbon market.

“Thermal power plants in the southwestern province were running at full load to ensure power supply. These plants are rather old, they already have issues with compliance and their emissions have crossed the ETS threshold,” said Luyue Tan, a senior carbon analyst at financial data company Refinitiv, which closely monitors adjustment dynamics in China’s carbon market.

“The plants are likely to see further shortages in emissions allowances, so the utility group that they belong to will be required to purchase or transfer them internally. The Sichuan situation could result in huge volumes of ‘over-the-counter trades’ among the plants before the next compliance period. It might change market dynamics, ” Tan told Eco-Business. Over-the-counter trades happen when ETS participants seek each other out and carry out transactions outside the carbon market.

China’s national carbon market, which kicked off trading on 16 July 2021, marked its first-year anniversary last month. It is the world’s largest ETS in terms of covered emissions, regulating about 4.5 billion tonnes of annual carbon dioxide output, though currently only power generators have a compliance obligation.

The ETS now covers about 2,200 power generators. Nearly 200 million tonnes of carbon changed hands in its first year of operations at a total value of 8.5 billion yuan (US$1.26 billion). The market closed at about 58 yuan ($8) on 15 July 2022, the last trading day before its one-year anniversary, up 20 per cent from the price of emission allowances when it first launched, but still only a fraction of the current price of the European Union’s ETS, at 80 euros (US$80) per tonne of CO2.

In June, media reports pointed to how an extension of the deadline by three months for key polluters to submit data used to allocate greenhouse gas (GHG) emissions permits by China’s Ministry of Ecology and Environment (MEE) would deliver a setback to the country’s carbon market. Heavily-polluting industrial sectors, which include iron and steel, non-ferrous metals, building materials and petrochemicals, are now expected to be enrolled only in 2024, say observers, as the authorities focus on coming up with a set of uniform guidelines and system for emissions accounting and verification for the power sector.

The ETS will cover 60 to 70 per cent of China’s total emissions only when both power and industry sectors are included.

At a briefing last month, MEE spokesman Liu Youbin said that building the ETS was a complicated process, and the national-level initiative is “still at an early stage”. The ministry had been actively investigating compliance reports from firms. Earlier this year, it named and shamed rogue polluters for tampering and forging test reports. Liu said that the clampdown served as an effective deterrent.

In a commentary published in state-owned English-language publication China Daily on Monday, chief economist of China Industrial Bank Lu Zhengwei wrote that laws and regulations concerning carbon trading should have been established earlier on to stabilise market expectations. 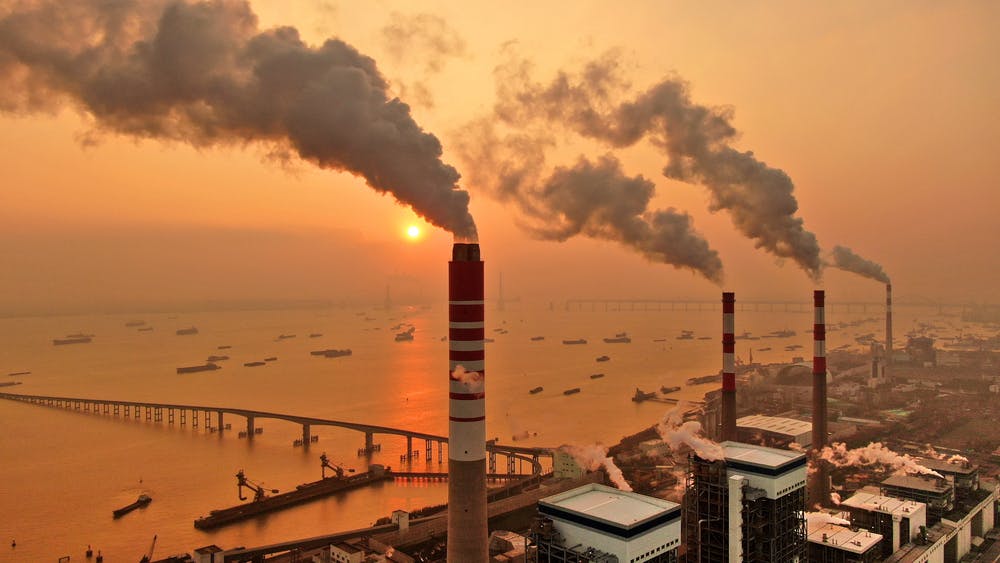 Lu added that carbon emission quotas are now released on a yearly basis in China’s carbon market, and as a result, electricity companies cannot benefit from clear market forecasts. “Meanwhile, unused carbon emission quotas can be carried over to later trading periods in China. Therefore, electricity companies under compliance obligations tend to hold on to unused quotas rather than trade them, so they can cope with future uncertainties.”

“This has resulted in a lower willingness to trade… A clear carbon emissions target and a dynamic mechanism should be established. These are the foundation of a stable and effective carbon trading spot market,” said Lu.

In the EU, long-term targets are clearly set to cut carbon emissions over a maximum 10-year period, to prepare market entities and allow them time to set clearer future plans.

In Refinitive’s 2022 Carbon Survey, nearly half of the respondents, which include policy regulators and traders, say the ETS faces technical issues which have resulted in opaque data and a lack of transparency. 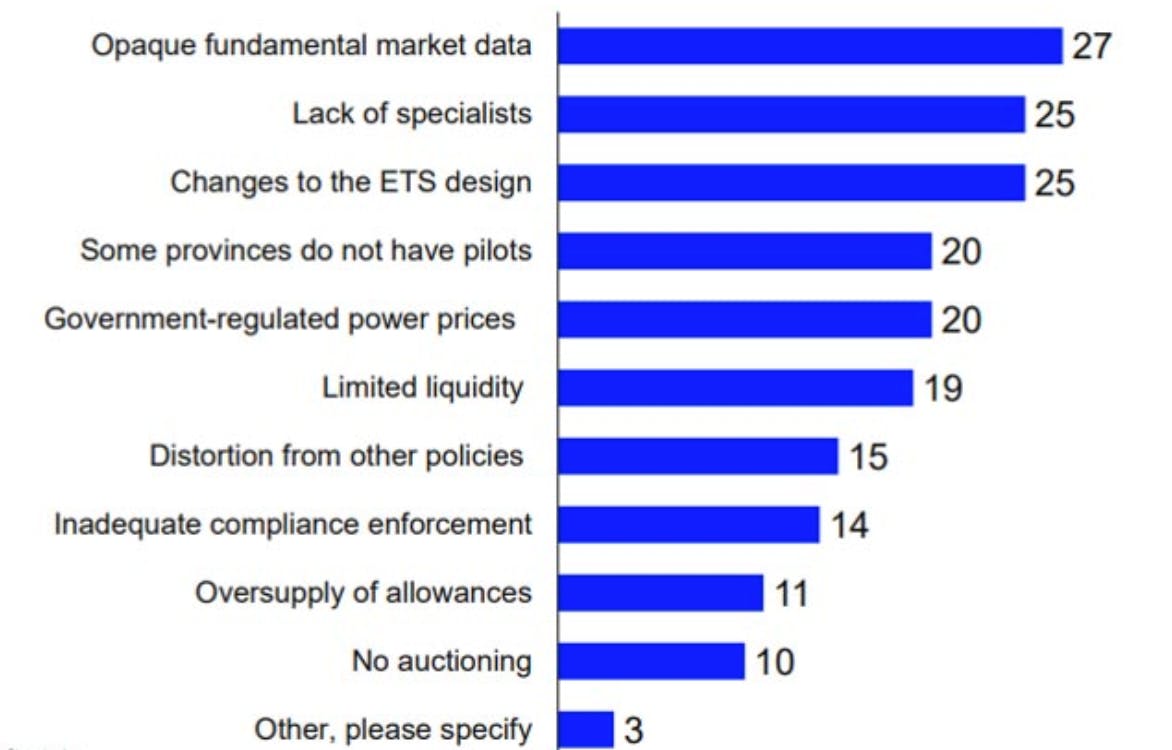 In a survey conducted by Refinitiv, nearly half of the respondents said that opaque market data proved the most challenging for navigating China’s emissions trading scheme. Source: Refinitive 2022 Carbon Survey

An investigation by MEE late last year found that most of the 2,200 compliance entities in the national ETS have some type of data issue related to emissions reporting.

“It is rare for China to shine the light on fraudulent reporting in this way. The fact that a central government ministry felt the need to intervene directly at the corporate level indicates how serious the problem is. Work to oversee and improve emissions reporting is set to continue in the next few years,” said independent green finance consultant Xu Nan, who has worked with the World Bank’s lending arm International Finance Corporation (IFC) and for United Nations agencies.

Refinitiv’s Tan said that the occurence of data fraud did not put confidence in the market and has slowed market expansion. “MRV is the most urgent issue at the forefront that needs to be resolved. With no law in force, penalties for data fraud remain limited.”

Tan points out that the MEE has taken action. Two weeks ago, it released a joint action plan with the country’s top economic planner National Development and Reform Commission and the National Bureau of Statistics, requiring industrial associations and the respective authorities to collectively complete the general emission accounting and verification methodology framework by 2023, and upgrade it to a comprehensive system by 2025.

“For now, the other hard-to-abate sectors would have to wait (before they are covered by the ETS). The situation is also not peculiar to China. We are seeing a lot of complexities in the energy transition, with countries dialing back on their carbon neutrality goals and doubling down on coal use due to energy security concerns. At least China is holding on to its promises, and the COP27 climate summit in November this year would be key to seeing if there are more developments on this front,” said Tan.

A clear carbon emissions target and a dynamic mechanism should be established. These are the foundation of a stable and effective carbon trading spot market.

As the world’s largest carbon emitter, China has pledged to peak emissions by 2030 and achieve carbon neutrality by 2060. Its national ETS is seen as a path finder to emissions reductions, and an important tool in China’s climate policy.

Chinese think tank SinoCarbon analyst Chen Zhibin said that the state authorities are expected to approve the ETS regulation which will lift the ETS policy framework higher in the regulatory hierarchy.

“Work to establish the carbon market and lay its proper foundations will not be done overnight. It has to happen in phases, and will need further tweaks and improvements. China’s ETS will have to take a trial-and-learn approach,” he said.