Why do we waste water? This World Water Day, we highlight six innovations that tackle some of today's most pressing water challenges.

Every March 22, World Water Day rolls by as a sobering reminder that the lack of clean and safe water resources is the biggest risk to human well-being, global peace and security worldwide.

The world’s oceans and freshwater resources underpin virtually every activity that is essential to human health and well-being, ranging from agriculture to cleaning, drinking, and industrial manufacturing. And yet, the statistics reflect a gross failure on humanity’s part to value this precious resource.

First, there is the excessive and wasteful use of water. The United Nations Water agency (UN Water) estimates that more than 80 per cent of the wastewater generated by society flows back into the ecosystem without being treated or reused.

Worse, most cities in developing countries don’t even have the resources to meet their wastewater management needs today. A recent report by the United Kingdom-based Ellen MacArthur Foundation also found that at current rates of water pollution, there could be more plastic than fish in the sea by 2050.

Water scarcity is also a growing problem. Experts estimate that by 2030, global demand for water will outstrip supply by 40 per cent.

Given the intensity and scale of the problem, it is perhaps no surprise that global policymakers, industry leaders, and communities have stepped up the search for solutions to this urgent crisis. Two of the United Nation’s Sustainable Development Goals—the global list of development priorities from now till 2030—for example, focus on delivering clean water and sanitation, as well as preserving the health of ocean ecosystems.

Companies, too, are pumping millions into the search for solutions to problems such as water scarcity and pollution. United States-based company XPRIZE, for example, awards millions to ideas for how to extract freshwater from the environment, find better ways to clean up marine oil spills and measure the chemical properties of ocean water.

This year’s World Water Day theme is “Why Wastewater”, which explores both water wastage and industrial wastewater. From innovative ways to produce freshwater to manufacturing techniques that dramatically slash water use, here are five solutions that are a source of hope for a clean and secure global water supply.

Marine litter is a massive problem, literally. The Great Pacific Garbage Patch, for example, is a vortex of trash in the middle of the Pacific Ocean that is approximately as big as the US state of Texas. But in recent years, young entrepreneurs have unveiled various efforts to keep rubbish out of oceans.

One of the most well-well known initiatives in this space is The Ocean Cleanup, founded in 2015 by then-21 year old Dutchman Boyan Slat to clean up the trash vortex in the Pacific Ocean.

At the heart of the effort is a floating screen that gathers up ocean rubbish, and then collects and ships it to land to be recycled. The project installed a prototype of a possible solution, a 100-metre long installationin the North Sea in June last year, and is currently studying the Pacific Garbage Patch in greater detail to make the final technology as effective as possible. 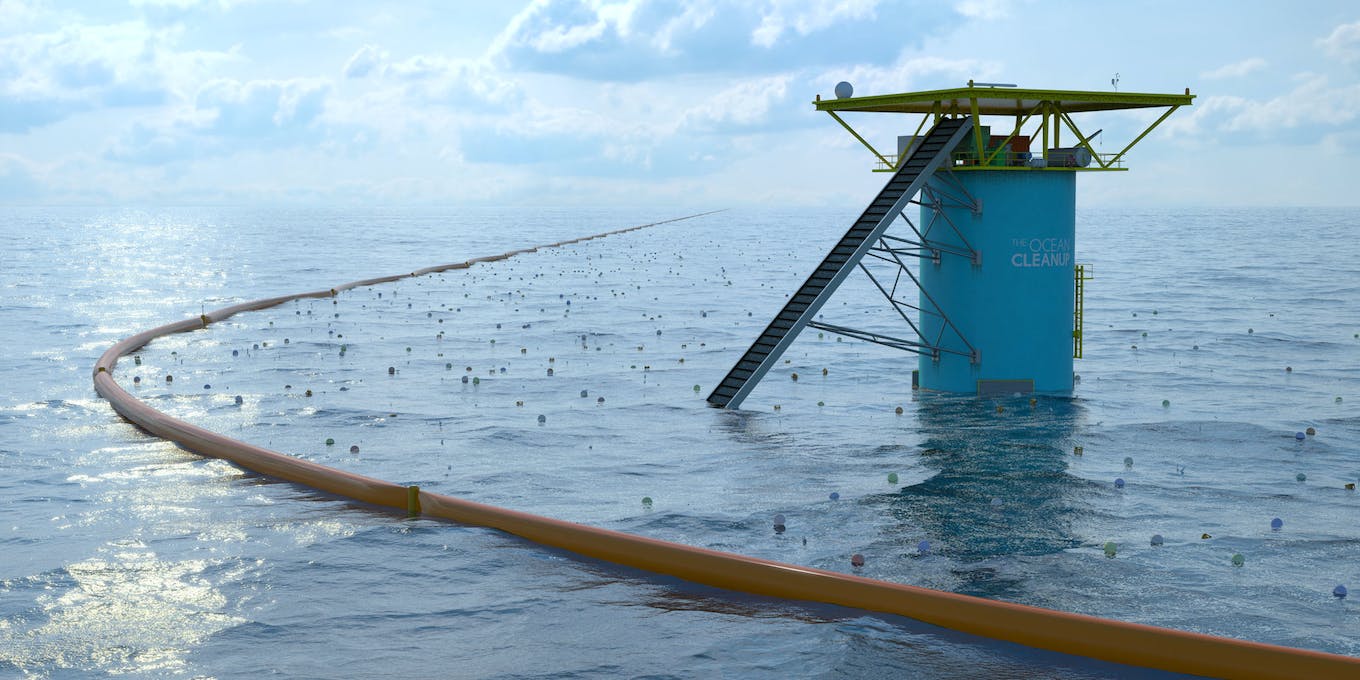 Another similar initiative is The Seabin Project, by Australian surfers Andrew Turton and Peter Ceglinski. First launched in late 2015, the concept is simple: A rubbish bin that floats in the water around yacht clubs, docks, and ports—high risk areas for pollution from trash as well as fuel—sucking in water through renewable-energy powered pumps and trapping litter as well as oil and fuel.

The project, which has conducted several pilots in waterways around the world and crowdfunded more than US$260,000 for commercial manufacturing last year, aims to launch its first commercial prototypes by the end of April this year.

But as clothing companies begin to realise that their water-intensive ways are undermining their own long-term access to natural resources, they are developing new ways to make clothing without the massive water footprint.

American denim brand Levi’s, for example, has a finishing technique called ‘Water Less’, that uses 96 per cent less water than traditional methods. The company has made some 13 million ‘Water Less’ products since launching the initiative in 2011, and saved 172 million litres of water in the process.

It is also working on a way to recycle old cotton clothes into new denim. An initial prototype, which used five old cotton t-shirts to make a pair of jeans, used 98 per cent less water than virgin cotton.

Firms in the industry are also confronting their water challenges in other ways. Sportswear manufacturers like Adidas and Nike, for example, have embraced “waterless dyeing” technology for their colourful polyester gear, which reduces water use to almost zero.

Different versions of this technology exist, including American company ColorZen, which treats cotton fibres to make it possible to dye them using less energy and water, as well as Dutch outfit DyeCoo, which uses liquidised carbon dioxide to dye clothes.

In a bid to convert some of the world’s most arid areas into fertile fruit and vegetable farms, scientists around the world have developed ways to turn seawater into fresh water using solar energy.

In a nutshell, the seawater is pumped in from the sea and dripped over a honeycomb structure inside the greenhouse, where it evaporates. The evaporation cools down the indoor environment, while the resulting water vapour condenses on the greenhouse roof, forming fresh water.

Examples of this technology in use include The Sahara Forest Project, which, after a successful pilot in Qatar in 2012, has set up seawater greenhouses in Jordan and Tunisia in recent years, as well as the Sundrop Farm in South Australian town Port Augusta.

The latter farm, which grows tomatoes and began operations in 2012, consists of a 20-hectare greenhouse, a concentrated solar power plant that uses 23,000 mirrors to focus sunlight and produce heat, and a thermal desalination plant to treat seawater. The tomatoes it produces are found in supermarkets all across Australia. 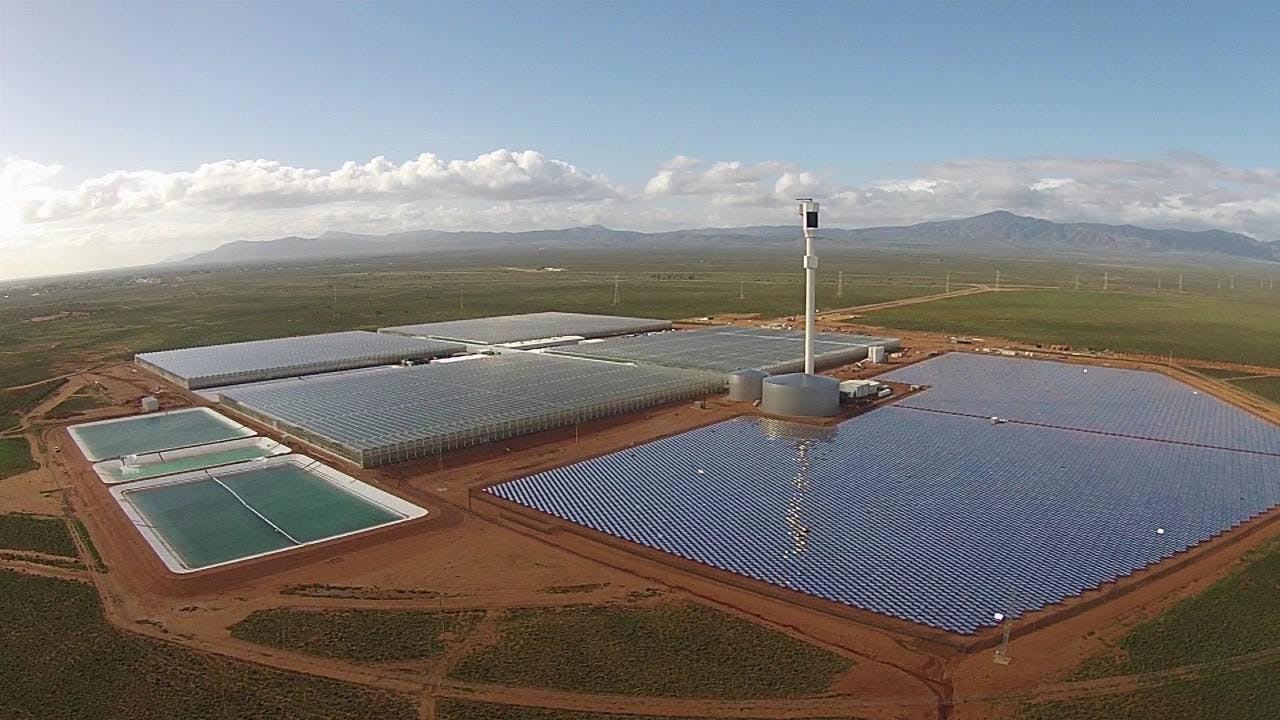 Wastewater treatment is one of the biggest water challenges today, and a fitting theme for this year’s World Water Day. Given the scale of the challenge, it is perhaps unsurprising that the wastewater treatment market is flooded with solutions that seek to clean up industrial effluent while minimising energy use and costs.

Some inspiring examples in the sector include Dutch professor Mark van Loosdrecht’s innovation Anammox, a process which uses special bacteria to remove pollutants from water using less energy, oxygen, and chemicals than other similar water treatment solutions. The technology can save water treatment plants as much as 60 per cent in operational costs, while also shrinking their carbon footprint.

The professor, who won the prestigious 2012 Lee Kuan Yew Water Prize for his innovation, is now looking at ways to recover useful raw materials from the water treatment process, and turn the normally expensive process into a profitable one.

Another low-cost example is Australian firm Biogill, which can clean up wastewater that is too dirty or oily for other systems to deal with. At the core of the system is a patented surface called a “nano-ceramic membrane”, which is conducive to the growth of bacteria that can remove pollutants from water.

The system uses a low-energy pump to draw water up from treatment tanks and spray it over the bacteria-covered membrane, where it is cleaned up. Because of its minimal energy requirements, it can save companies tens of thousands of dollars a year.

Conventional wisdom dictates that water and electronics don’t mix well, but in recent years the smart water sector has seen a proliferation of solutions that use digital technology such as sensors, data analytics software and remote-controlled motors and pumps to improve how water is managed.

Leaders in this sector include Swiss power and automation giant ABB, which has developed an extensive suite of monitoring solutions and measurement devices to allow plant operators to make sure everything is running smoothly, anticipate and avert breakdowns, and minimise water wastage and losses.

Other award-winning smart water innovations include Israeli entrepreneur’s software solution TaKaDu, which analyses large chunks of data from utilities to detect issues such as leaks, bursts and pressure issues. By spotting deviations early, TaKaDu  which won the 2013 Sustaina Award, can resolve issues quickly, and reduce water wastage in the long run.

Observers can expect rapid growth in this area in the future. The 2017 Global Opportunity Report, authored by Danish think-tank Sustainia and corporate partners, iSmart Water Tech as the biggest sustainability opportunity of the year, predicting that it would reach US$20 billion by 2020, more than double its US$8.5 billion value today.

6. Cleaning up water for the poor

The World Health Organisation estimates that globally, at least 1.8 billion people get their drinking water from sources contaminated with faeces. Where business and governments leaders are unable to afford or deliver safe drinking water for all, non-government organisations have stepped up with low-cost solutions to close the gap.

Examples of NGOs whose innovations have been recognised as effective by the United States international aid arm include 1001 Fontaines, a French-Cambodian outfit that uses solar-powered disinfection technology to produce safe drinking water that costs rural communities as little as one cent per litre; and Washington DC-based Evidence Action, which has installed chlorine dispensers next to wells and water sources in several African countries.

After drawing water, communities can quickly add chlorine to their water to disinfect it, a process that only takes as long as their walk home from the water pump. The result is clean water that is safe to drink for two to three days.

Each of these solutions tackle a different element of the water challenge. But ultimately, as UN-Water chair Guy Rider notes in his 2017 World Water Day message, “the world’s water is on a constant cycle, and we need to make sure it is carefully managed at every stage”.

“Water is finite and has to serve the needs of more and more people,” says Rider. “Let’s reduce and reuse more wastewater, and help ensure everyone has access to a safe and sustainable water supply”.